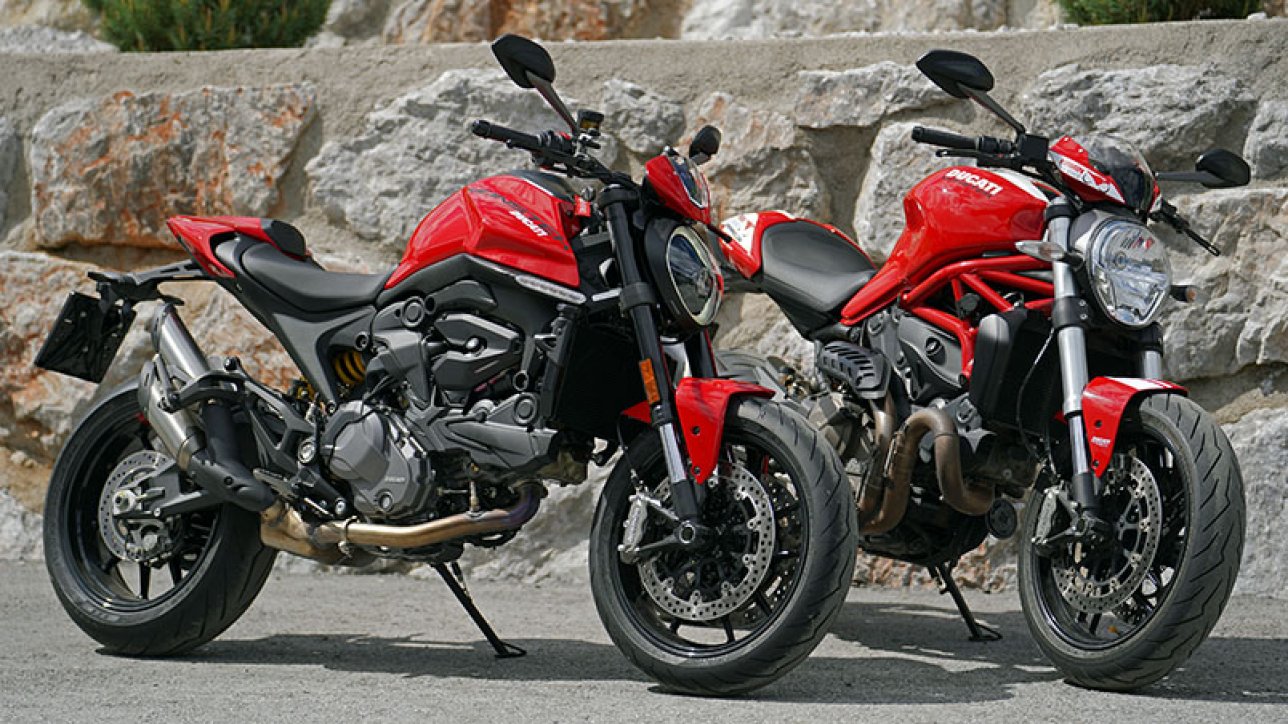 St. Johann in Tirol – Ducati has revolutionised its most successful model, the Monster. The bike is entering a new era, doing away with its characteristic trellis frame and being noticeably lighter. I requested to put the new model and my own 2015 Monster 821 Stripe head-to-head in a comparison test, so that I could find out for you about everything that’s changed…

The Seiwald Car and Motorcycle Centre in St. Johann in Tirol is the official Ducati dealership in the Tyrolean lowlands. I was allowed to pick up the new Monster Plus in classic Ducati Red from the dealership to test it for a few days. The “Plus” means that the cockpit fairing and passenger seat cover also come as standard, as opposed to the standard Monster. This is the only version offered in Austria. In 2015 the Monster 821 Stripe was rolled out with these extra furnishings as well. Additionally included were adjustable forks and two white stripes, which went from front to back, making for an even sportier look.

What immediately catches your attention is the absence of the steel trellis frame on the new Monster. It was replaced by an aluminium chassis, inspired by the Panigale superbike, and mounted directly onto the cylinder heads. Furthermore, the fuel tank has the characteristic “bison backed” shape, which, however, is not as pronounced as that of the 821. With that, the fuel tank capacity has dropped by 3.5 litres, noticeably reducing the range. Overall, the bike is narrower, which means the Monster’s typical brawny aesthetic has been lost. The rear has stuck even more strictly to tradition and emphasises the bike’s sporty character. During solo riding, the pillion is no longer equipped with a cover, but rather replaced with one; therefore allowing for the considerably more slender build. In a small hollow under the front seat, you find a USB port as well as storage room. The battery is installed under the rear seat for practical purposed, which makes expansion much easier compared to the 821. The oval full-LED headlight with an integrated Daytime light presents a modern interpretation of past Monsters’ round headlights. The dynamic indicators are set into the front fairing and deactivate automatically.

The engine displacement has been increased to 937 cc due to the bore being 6 millimetres larger, and, therefore, increased torque by 3.6 Nm over the 821, while almost completely maintaining performance. This improved torque really makes an impact. The 2.4 kilograms lighter 90° V-Twin produces 111 hp (82 kW) at 9,250 rpm and has a maximum torque of 93 Nm at 6,500 rpm. In total, the new Monster has shed 18 kilograms and now weighs 188 kilograms wet. Along with the engine the new front frame (-4.5 kg), rear frame (-1.9 kg), light alloy cast wheels (-1.7 kg) and swingarm (-1.6 kg) all contribute to reducing weight. The new hydraulic clutch with a slipper clutch function reduces the effort needed to operate by 20%. Changing up and down gears works seamlessly without the clutch, thanks to the series-standard quickshifter. 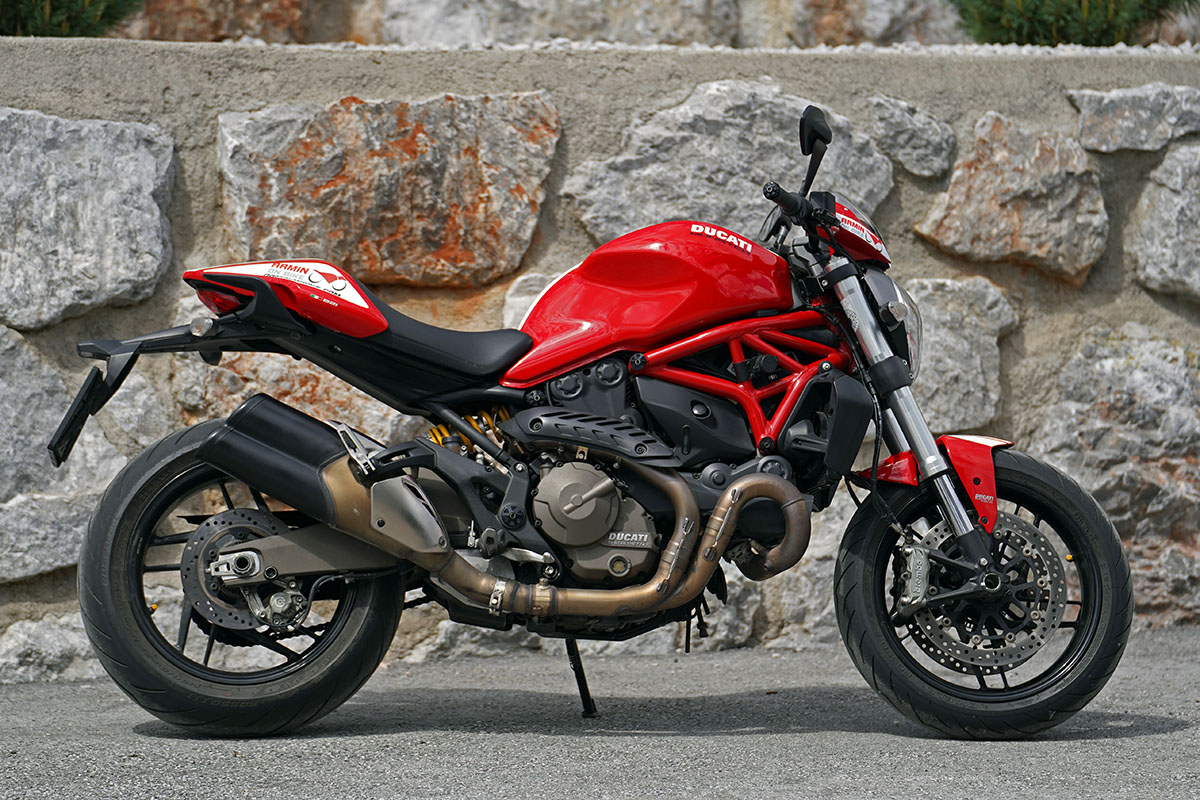 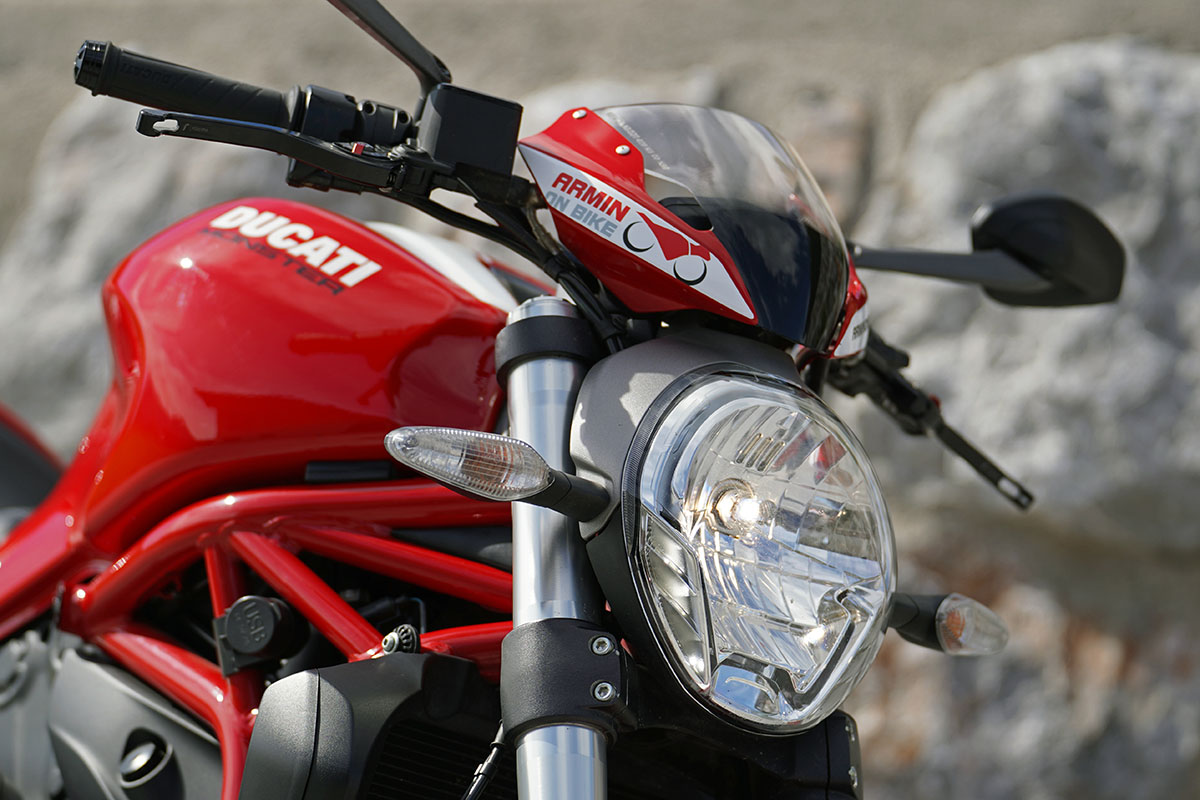 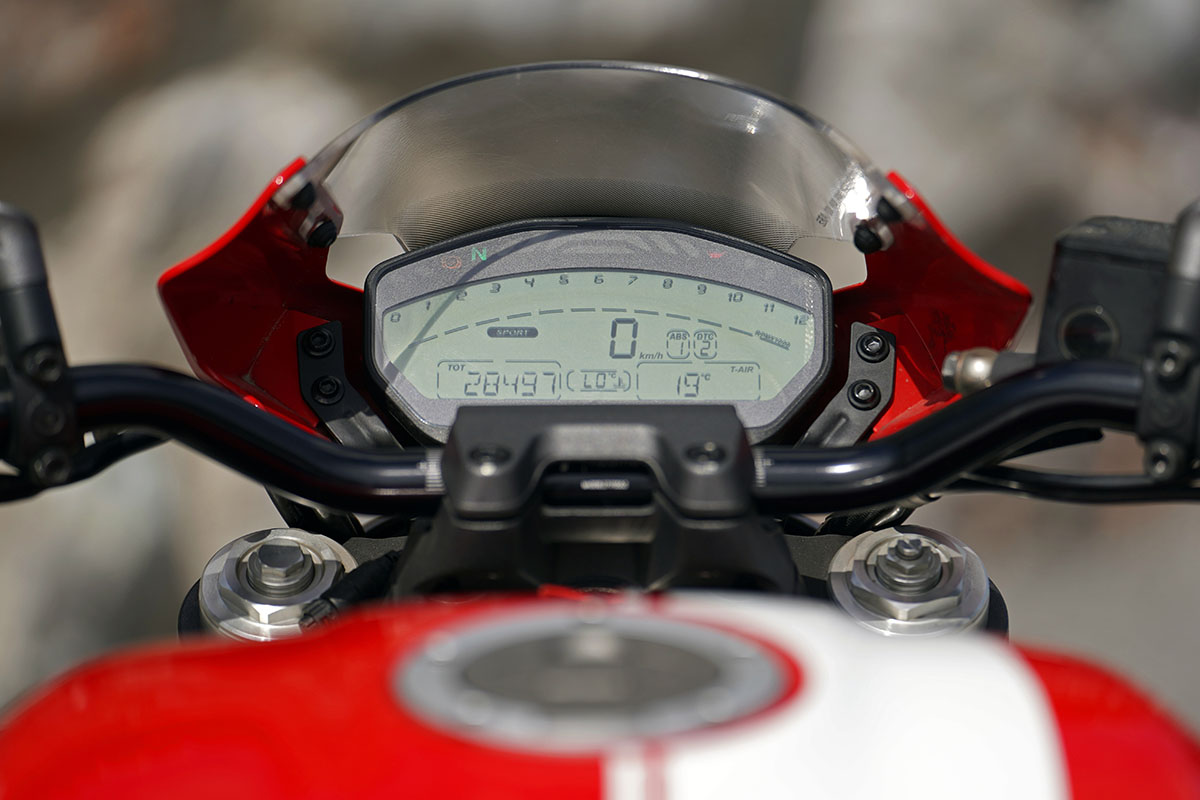 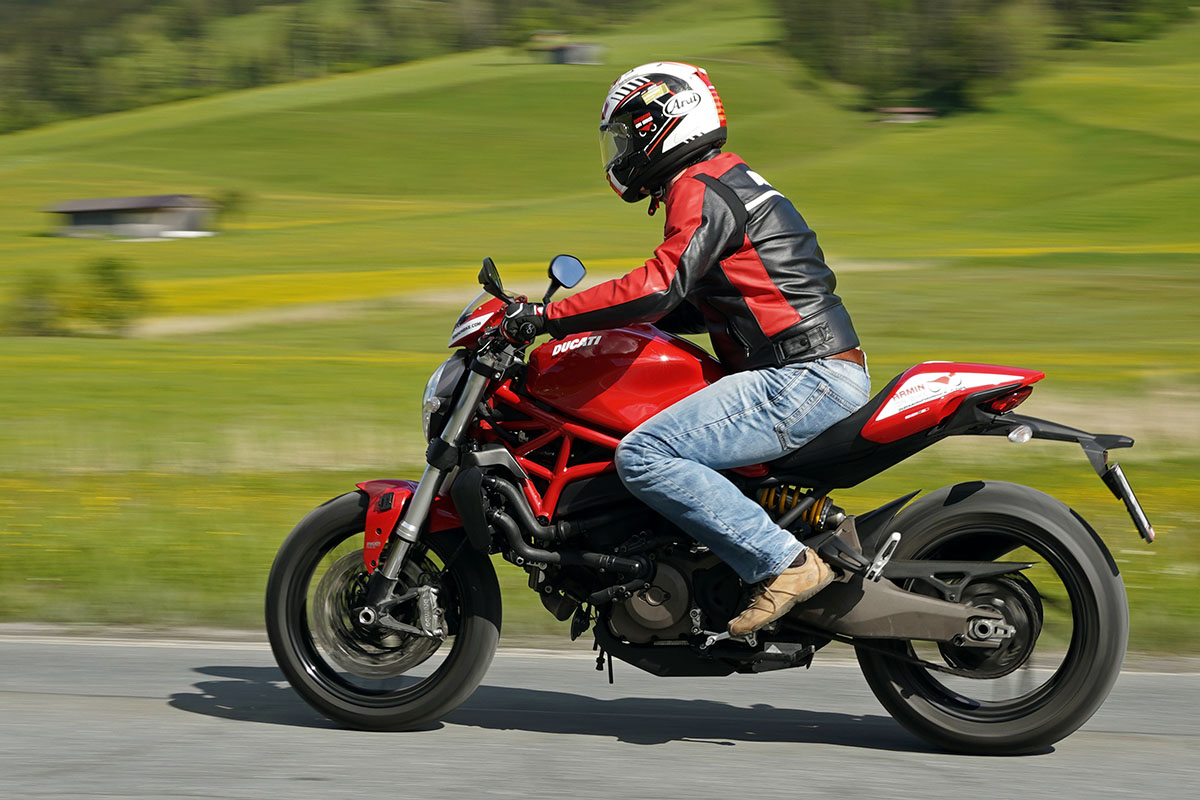 The sitting position on the new Monster is a little more upright now. The optimised seat with new upholstery offers more comfort and increases feedback from the road. The seat height in the highest positions comes to 820 millimetres. One centimetre more than the Monster 821, on which the seat height on the standard seat can be lowered to 785 millimetres. With the appropriate accessories, seat height ranges from 745 to 830 millimetres on the 821. On the Monster Plus, lowering the seat height to 800 millimetres is only possible with an accessory low seat, and even lower to 775 millimetres with a low suspension kit. Turning lock now sits at 36 degrees, a 7 degrees increase compared to its predecessor, and makes manoeuvring the bike considerably easier. Due to its slimmer shape, you can grip the bike tighter with your knees and are therefore better integrated into the machine. During my test ride on the Hochkönig Road, riding from Saalfelden to Dienten am Hochkönig, I noticed a huge difference from the 821. The bike turns in more readily and I had more trust when banking. I was travelling on the L216 alongside the Dientenbach river in the direction of Taxenbach. The curves along the valley became tighter and tighter. Banking from side to side was so sporty that I went into a slaloming frenzy. The cornering stability is excellent, and despite that, those small steering corrections are still always possible. One small drawback is that the footbrake lever is set a little too close to the bike. After switching from the 821 I found myself kicking into empty space several times, especially in wide motorbike boots. After getting used to the bike, however, I could adapt to it and thought it nothing more than a small hurdle.

Like the Monster 821, the new naked bike is equipped with a Brembo braking system, with two M4.32 monobloc 4 piston callipers on two 320 mm discs at the front end and one calliper on a 245 mm disc at the rear. The 3-level ABS on the new Monster now has rear lift-up prevention in levels 2 and 3, it also has a Cornering ABS function. On level 1, ABS only affects the front wheel. In addition, Traction Control has 8 levels, with which the level of intervention can be adapted to riding style and road conditions. Wheelie Control and Launch Control are new additions, which highlight the bike’s sporty character. The three Riding Modes remain unchanged: Sport, Touring, and Urban. For the latter, power is reduced to 75 hp. The display has changed a lot compared to the first 821. The monotone LCD display has given way to a 4.3” colour TFT display with a speedo and fuel gauge. With the Ducati Multimedia System as optional extra, your smartphone can connect to the motorbike via Bluetooth; some functions can be shown on the display and controlled via buttons on the handlebar. 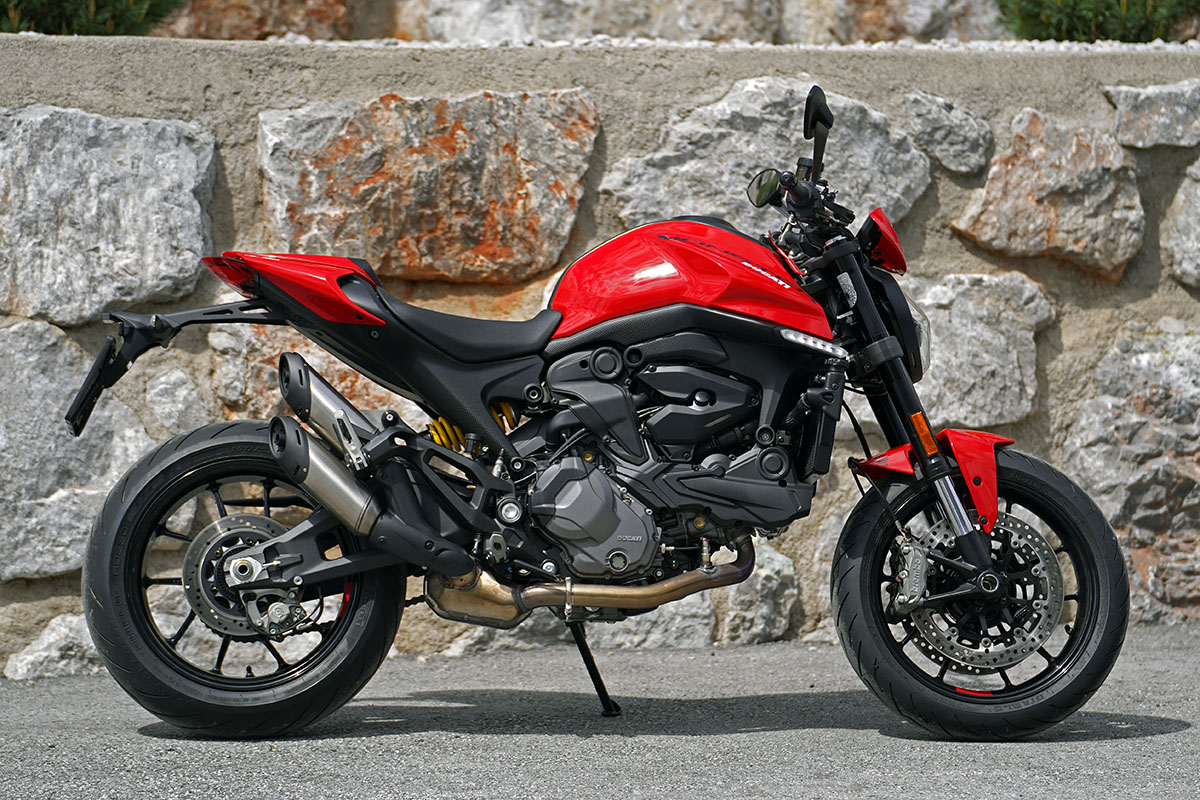 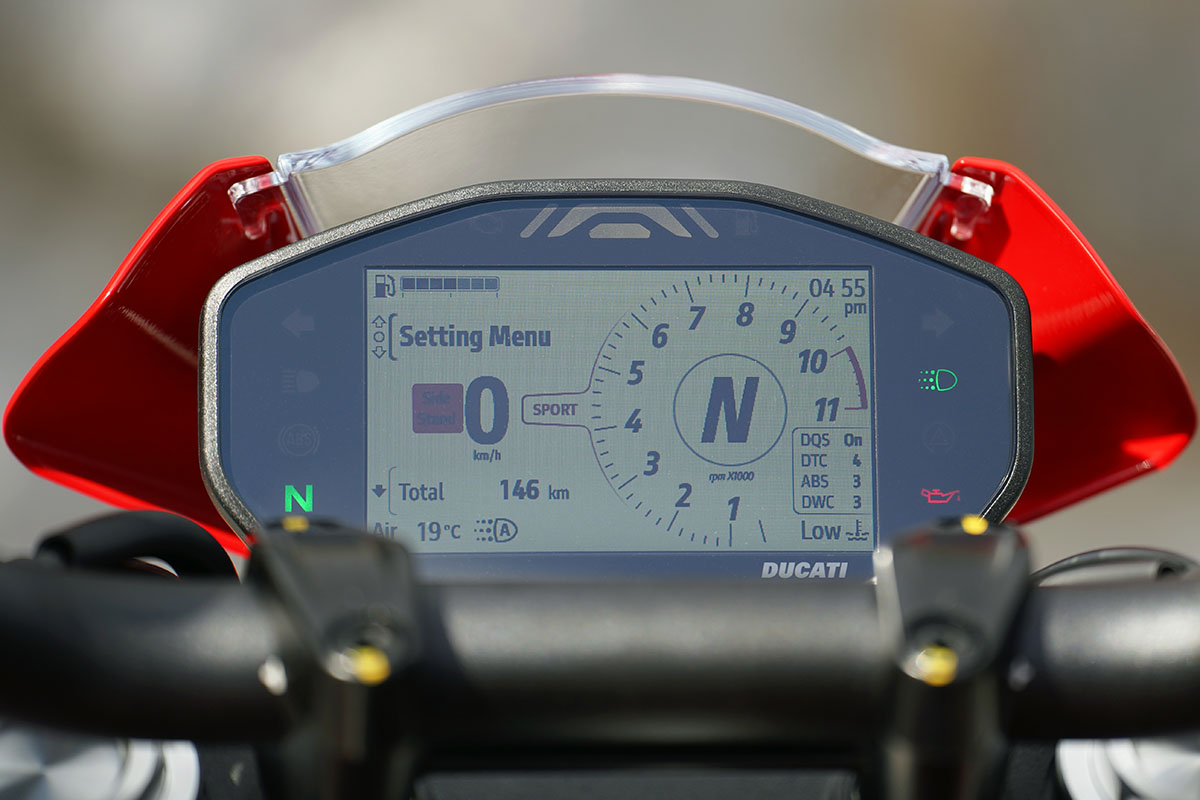 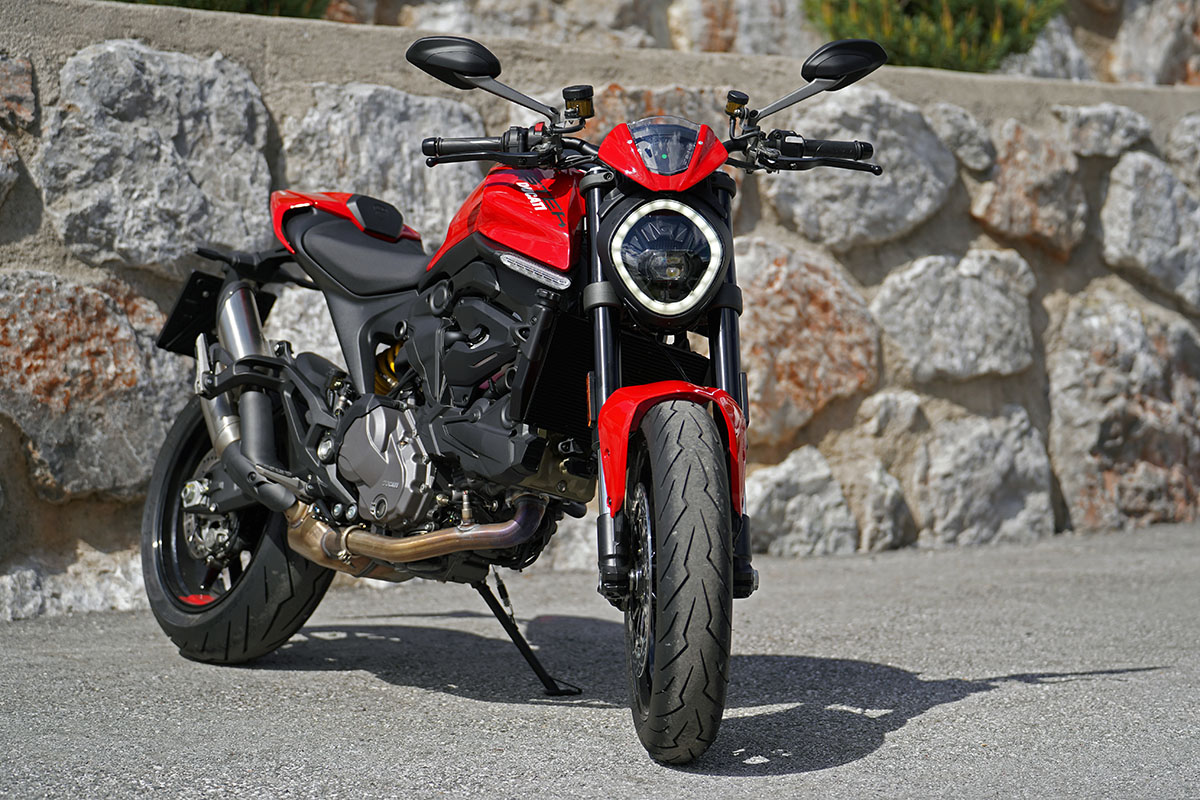 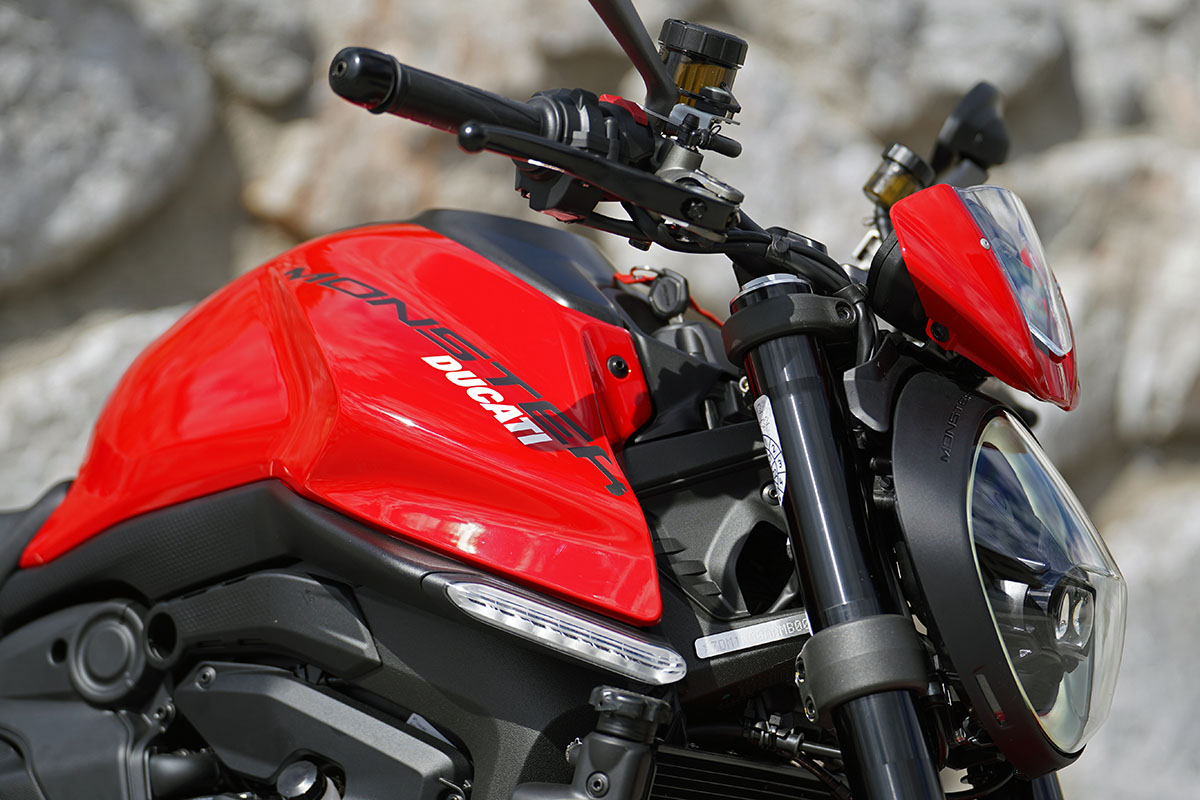 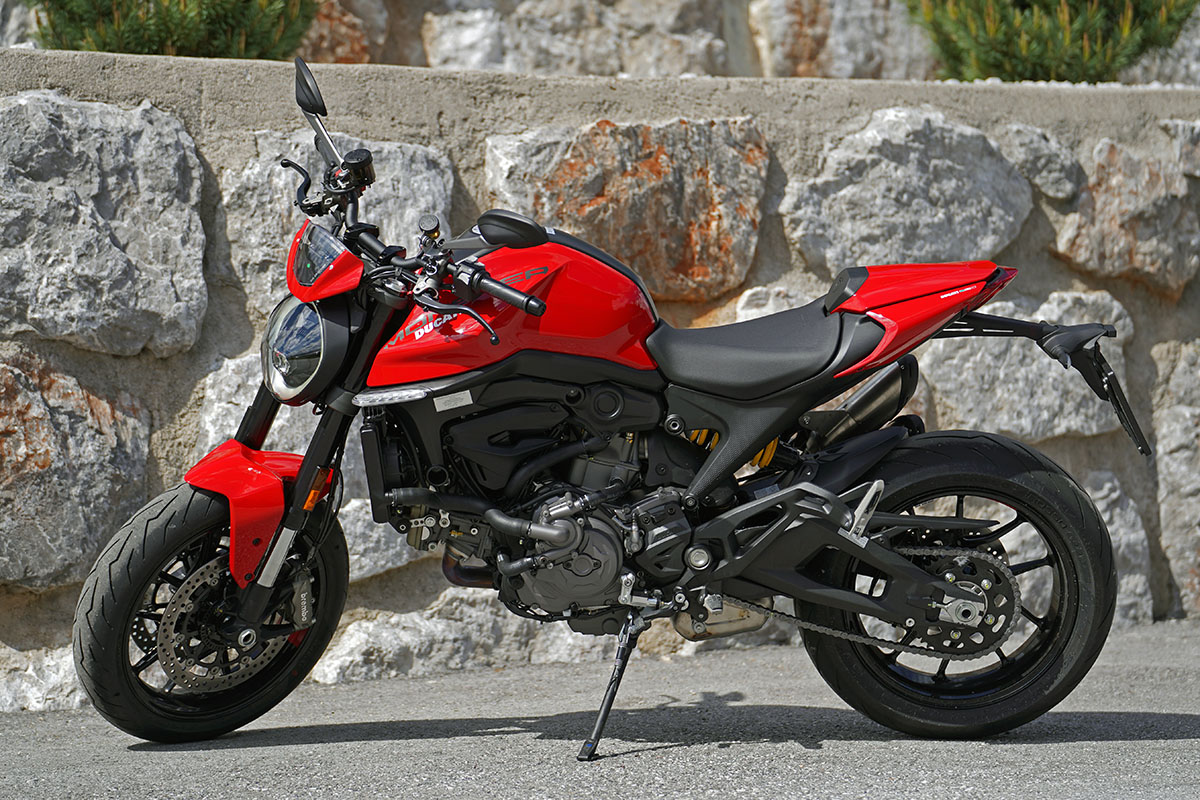 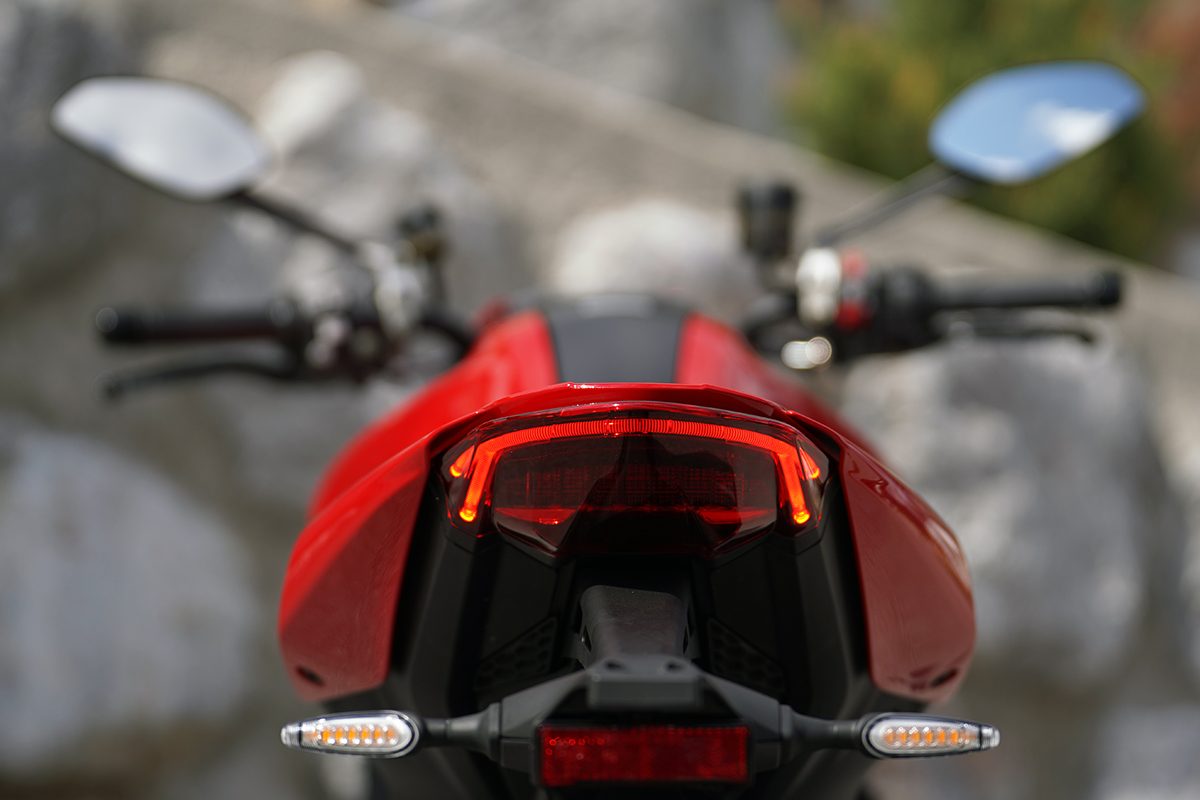 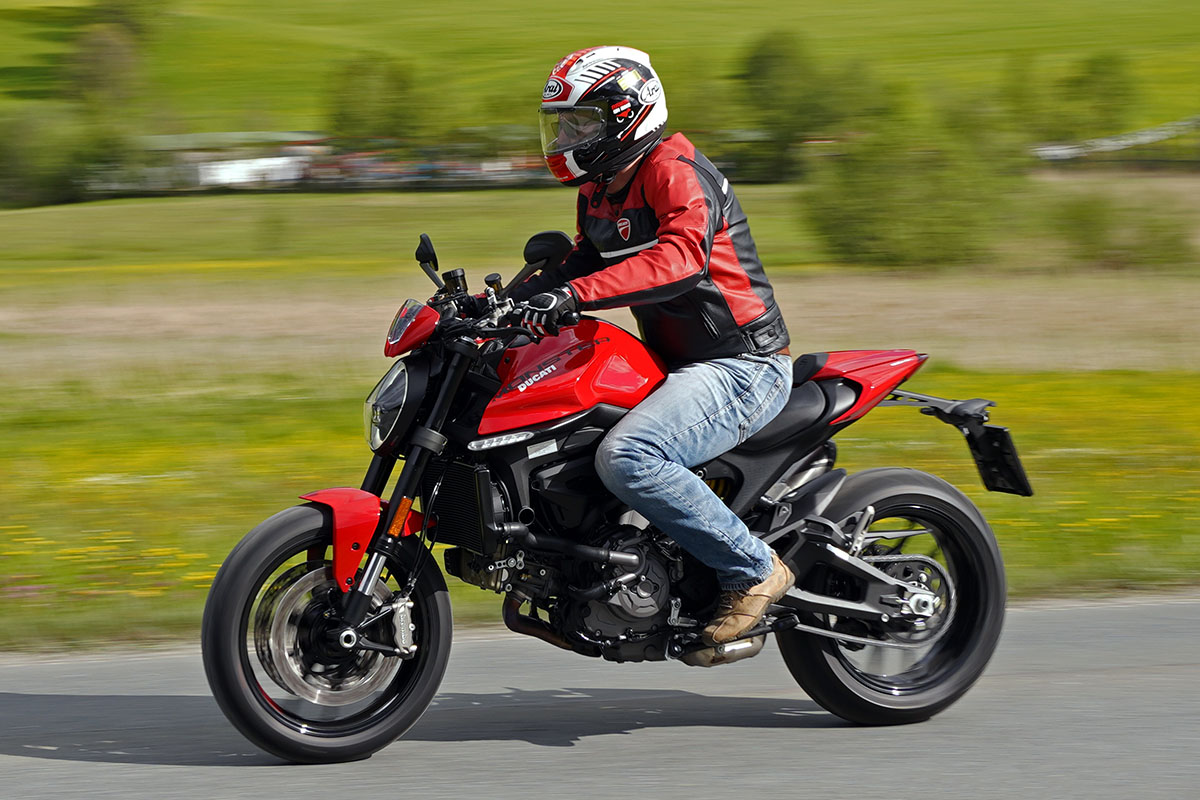 With the new Ducati Monster, the Bologna-based brand has succeeded in creating a motorbike built for the times. In terms of development, it was a case of striking a balance between tradition and modernity. What came of it is a strikingly lighter and slimmer motorbike, which due to the higher engine displacement has more torque to boot. Resulting from that is a much-improved riding experience, which brings almost never-ending riding pleasure. Famed Monster-esque design elements have been reinterpreted. Confirmed Monster fans are missing the original, muscular nature of the bike and its unique design. The absence of the trellis frame, however, comes into play again; the trellis is just not contemporary today. In the UK, the Monster Plus costs £10,635 and is therefore sitting in the upper bounders of the price bracket for its class. Until now this could be justified by the self-sufficiency of the model compared to its competition. Since this has been lost a little, only time will tell whether the new Monster will retake its spot as Ducati’s succsess model. 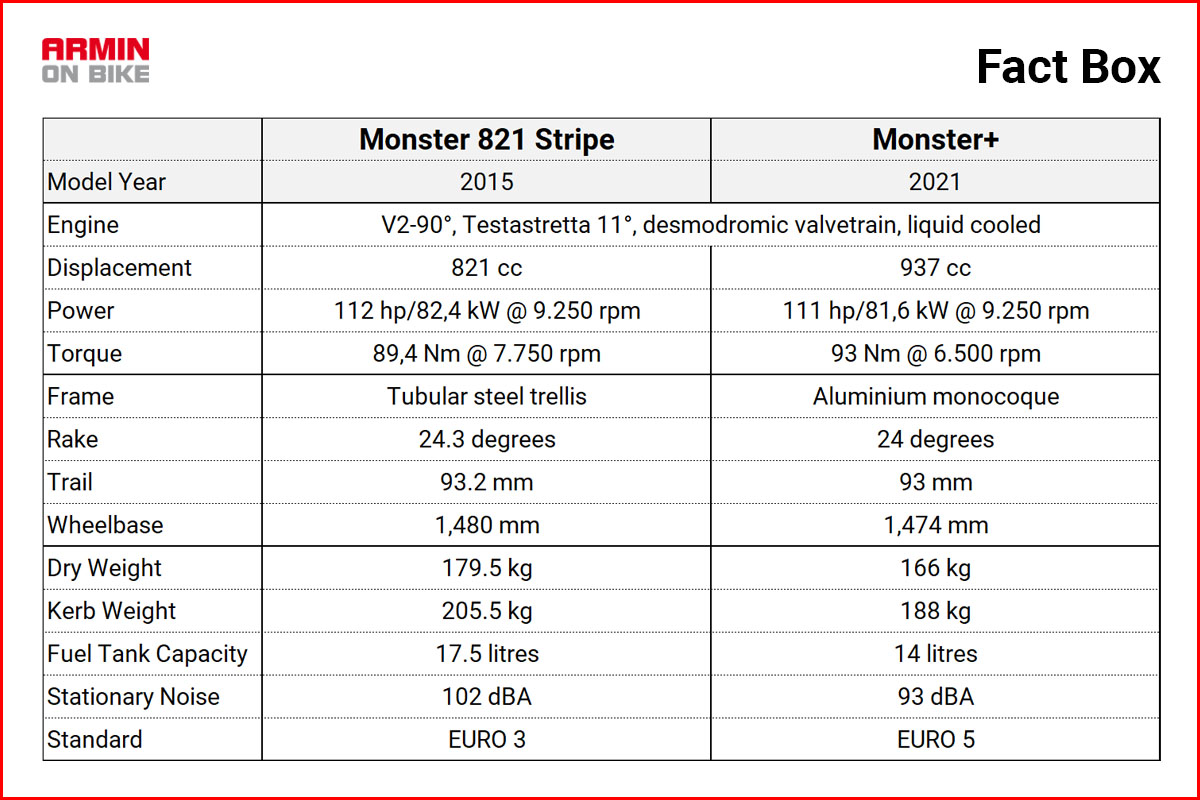