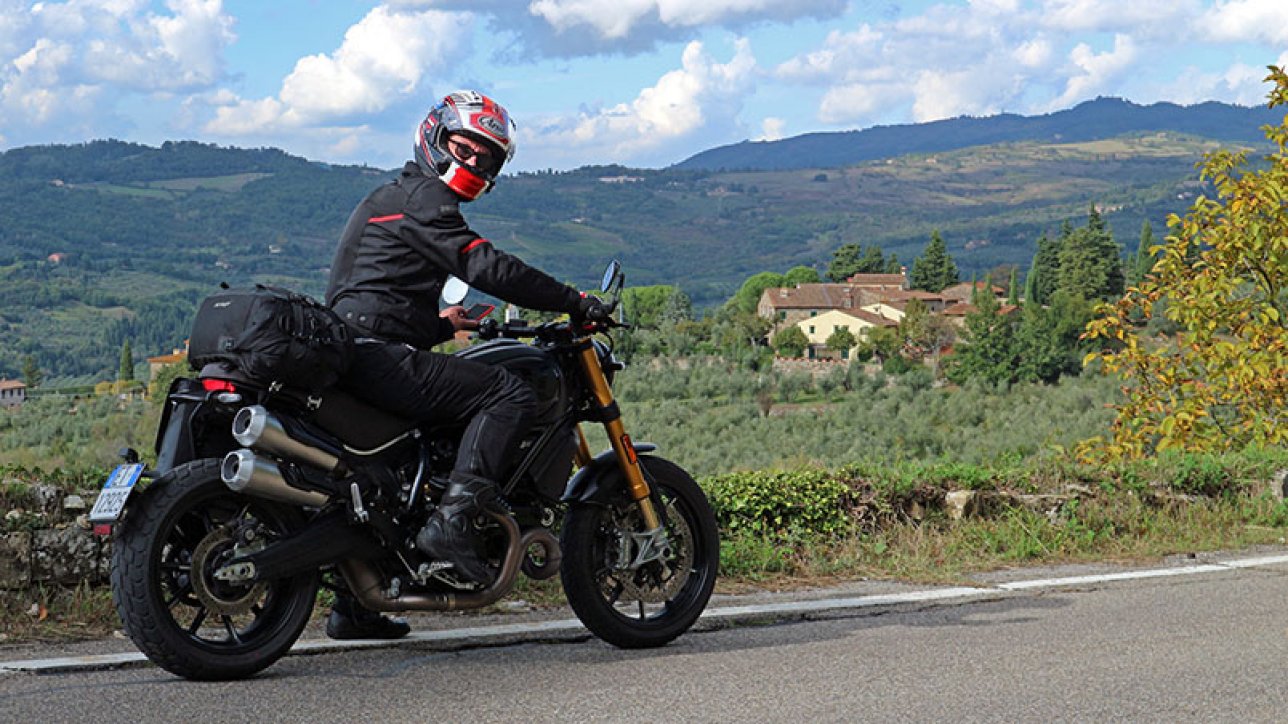 Tuscany | Italy – In order to test the revised top model of the series, the Ducati Motor Holding in Bologna provided me with the new Scrambler 1100 Sport PRO for a few days. I used the last beautiful autumn days for an extensive test in scenic Tuscany and visited the wonderful cities of Siena and Florence…

Two years ago I was able to test the first Scrambler 1100 from Ducati Austria on the Grossglockner (you can find the report in German here…). This time I had a longer journey. I drove over the Brenner Pass to Bologna to pick up the new Scrambler 1100 Sport PRO from the Ducati headquarters. As always, I stowed my luggage in my already tried-and-tested Kriega US-30 Drypack and also parts in my super useful Scrambler Ducati side pannier. I felt much more comfortable without the usual backpack. 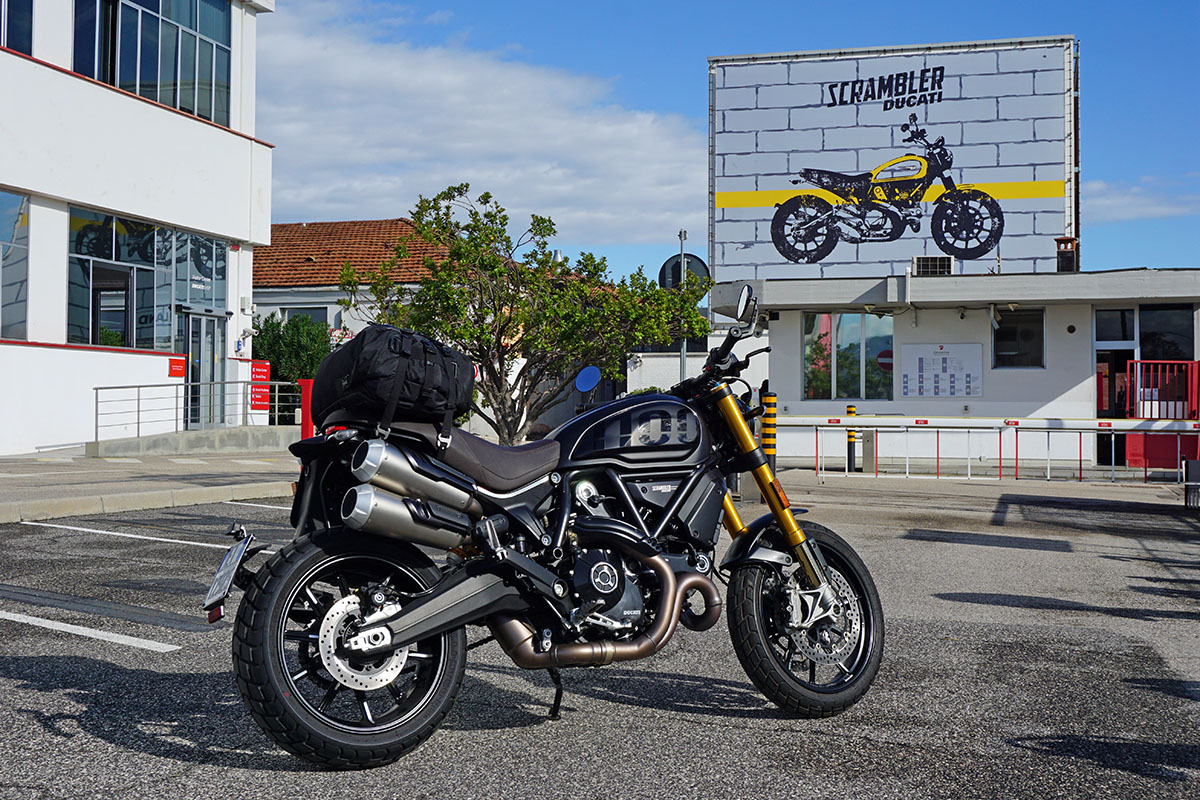 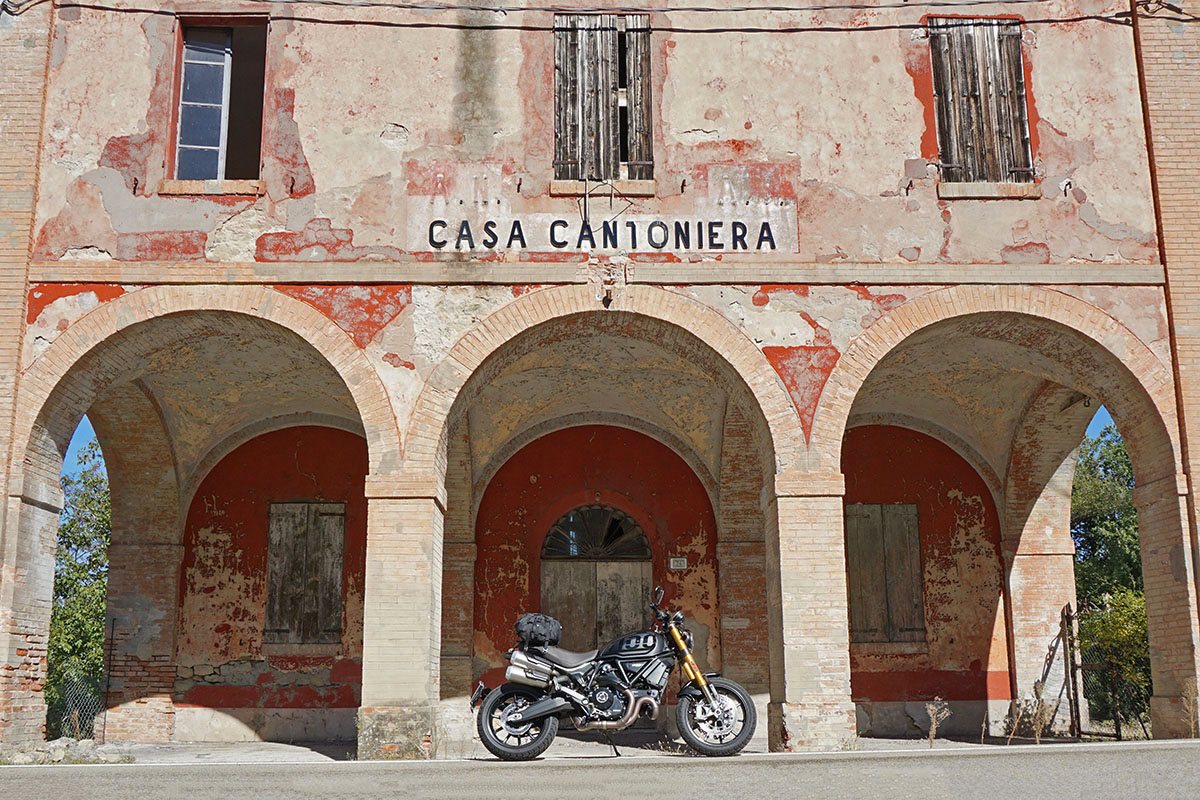 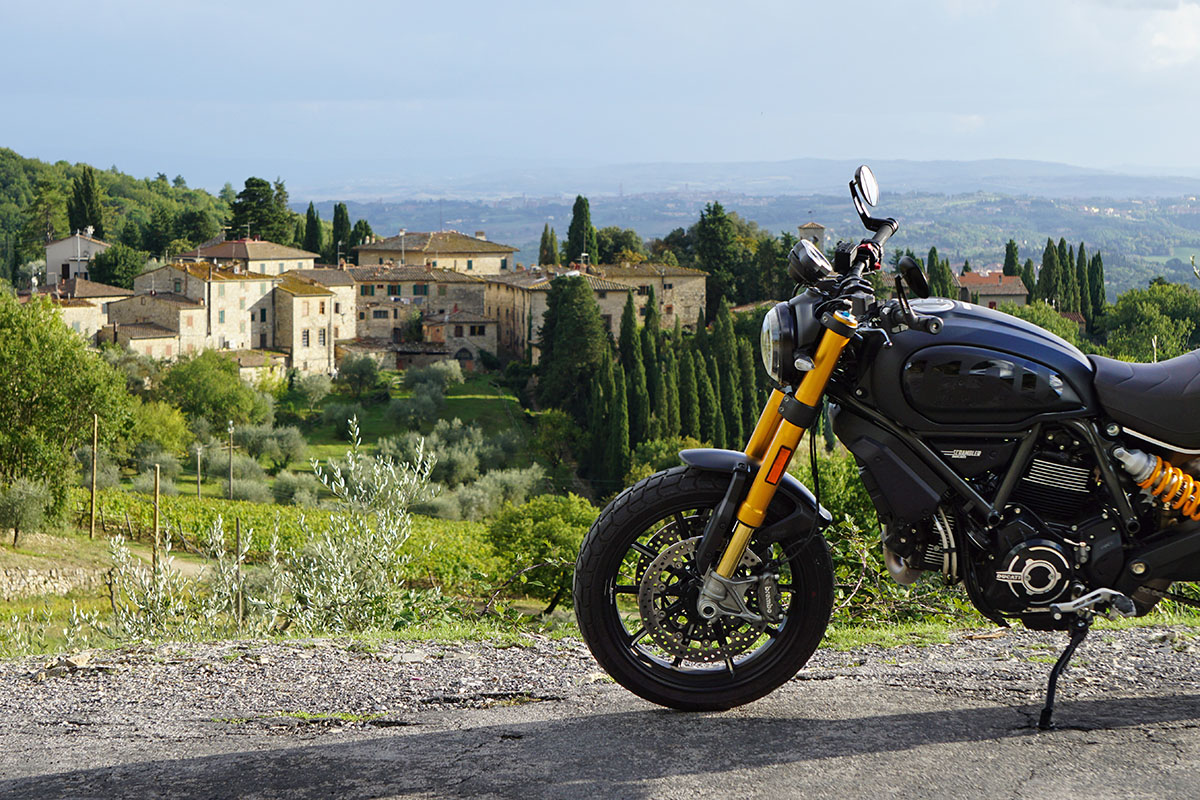 ON THE LEGENDARY SS65 TO FLORENCE

The Strada Stradale 65 della Futa owes its name to the course through the Futa Pass. The winding track also serves as optimal terrain for the official test riders of Ducati. Little traffic, different road surfaces and hilly terrain are perfect for testing. So I also used this path to test the Scrambler 1100 Sport PRO in detail. The bike willingly steers into curves. The Sport PRO has a fully adjustable Öhlins suspension. The factory configuration is rather tightly designed, which is noticeable on poorer roads by a somewhat bumpy driving behavior.

WHERE THE FAMOUS CHIANTI COMES FROM

Still on the SS65, on the city borders of Florence, I had a wonderful view over the city. The road winds its way down the hills into the city. The Brembo brake system with Bosch Cornering ABS is powerful and can be dosed effortlessly. With two four-piston calipers on floating 320mm brake discs at the front and 2-piston calipers on a 245mm brake disc at the rear, you are equipped very sporty. After crossing Florence from north to south, I reached Via Chiantigiana (SR222). The road runs for 69 kilometers through the famous Chianti wine region to Siena. A particularly beautiful winery on my way was the Castello di Fonteruoli in the Chianti Classico area. 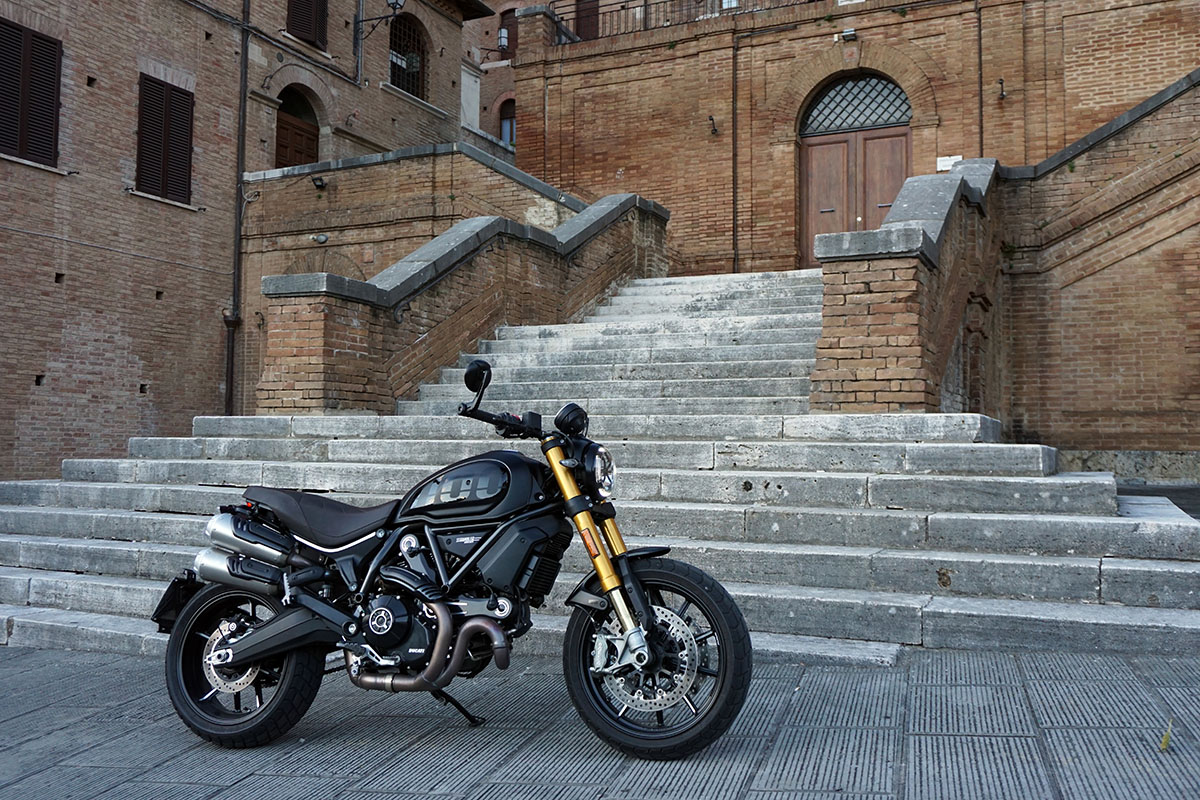 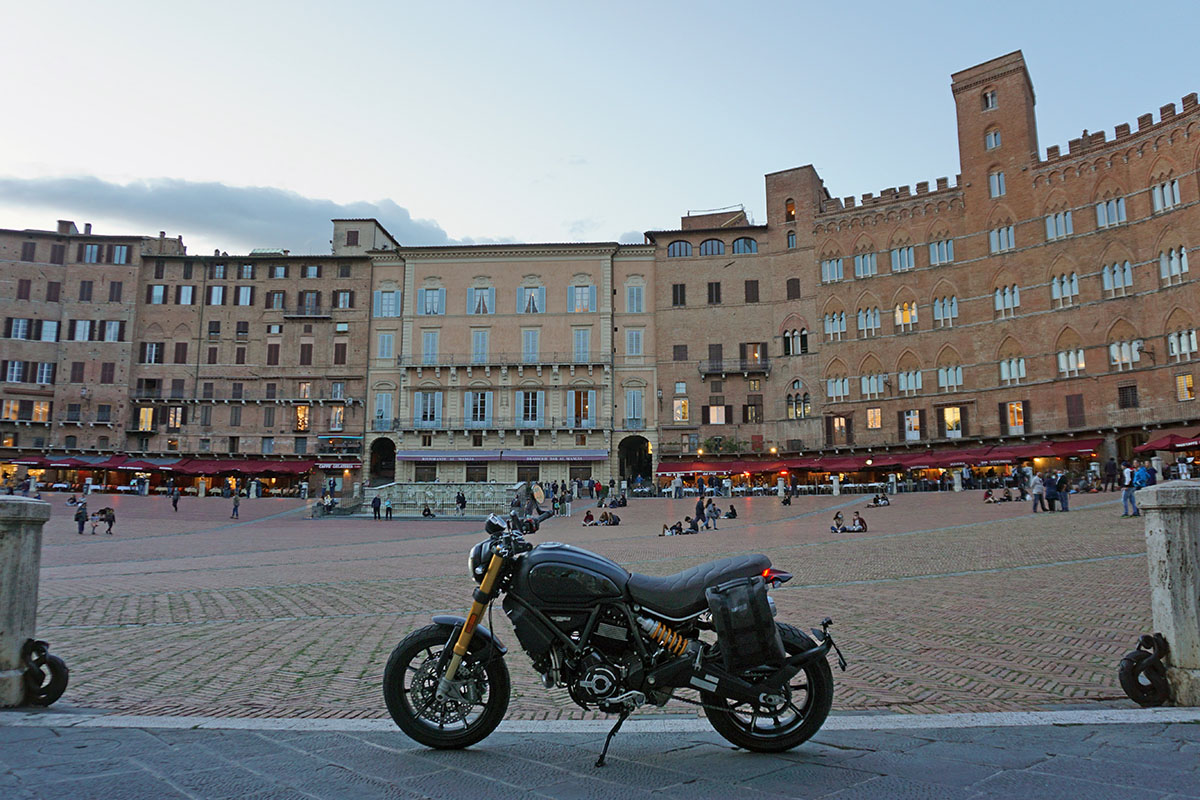 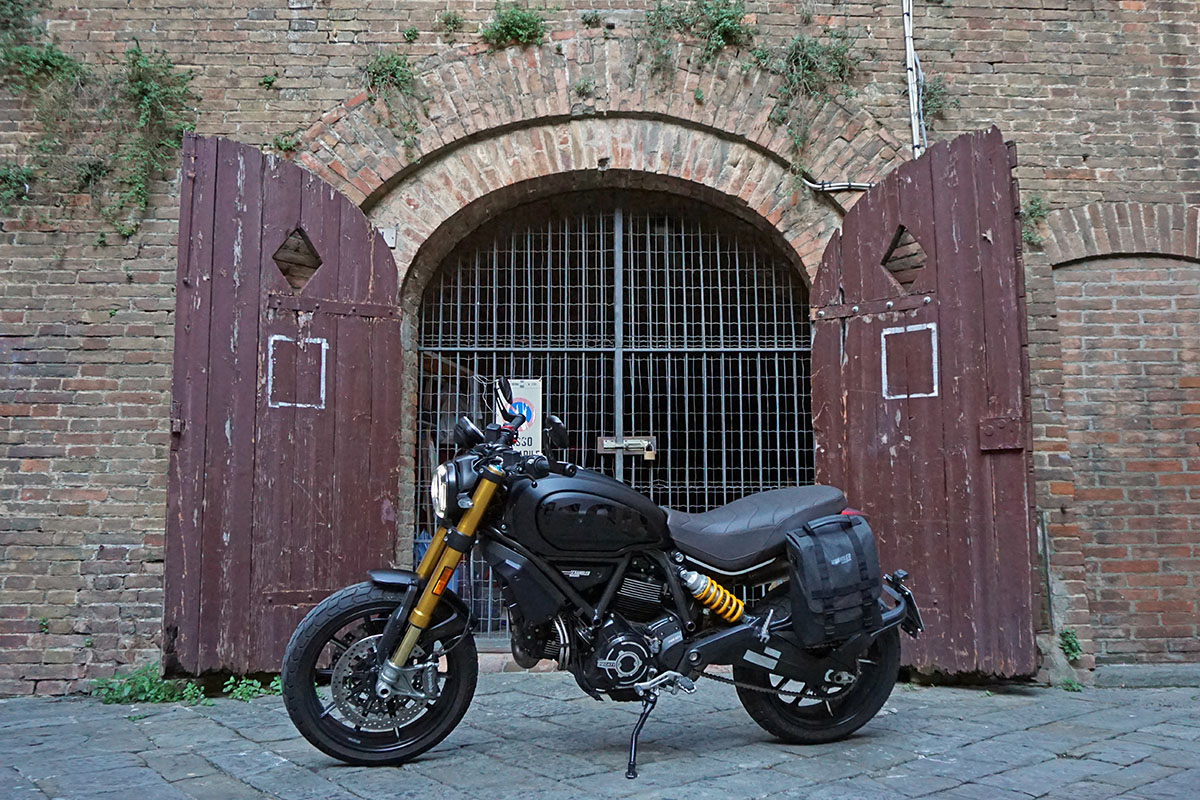 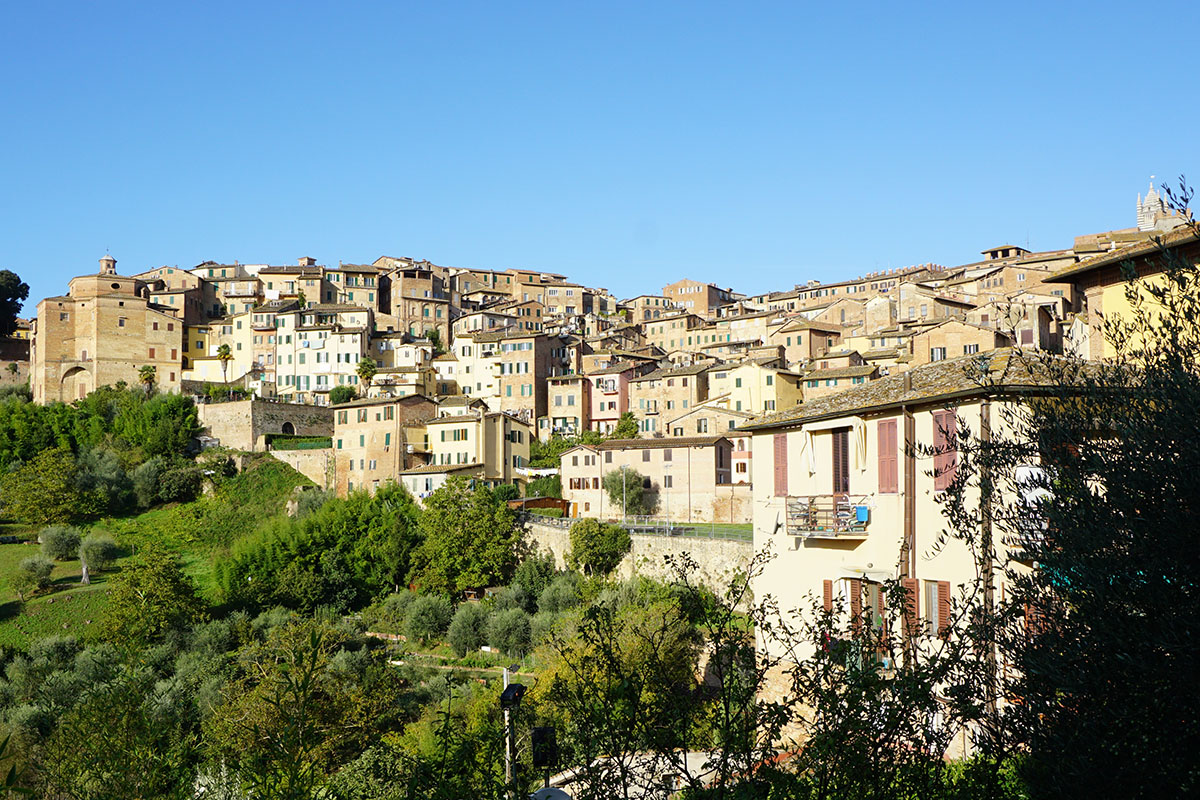 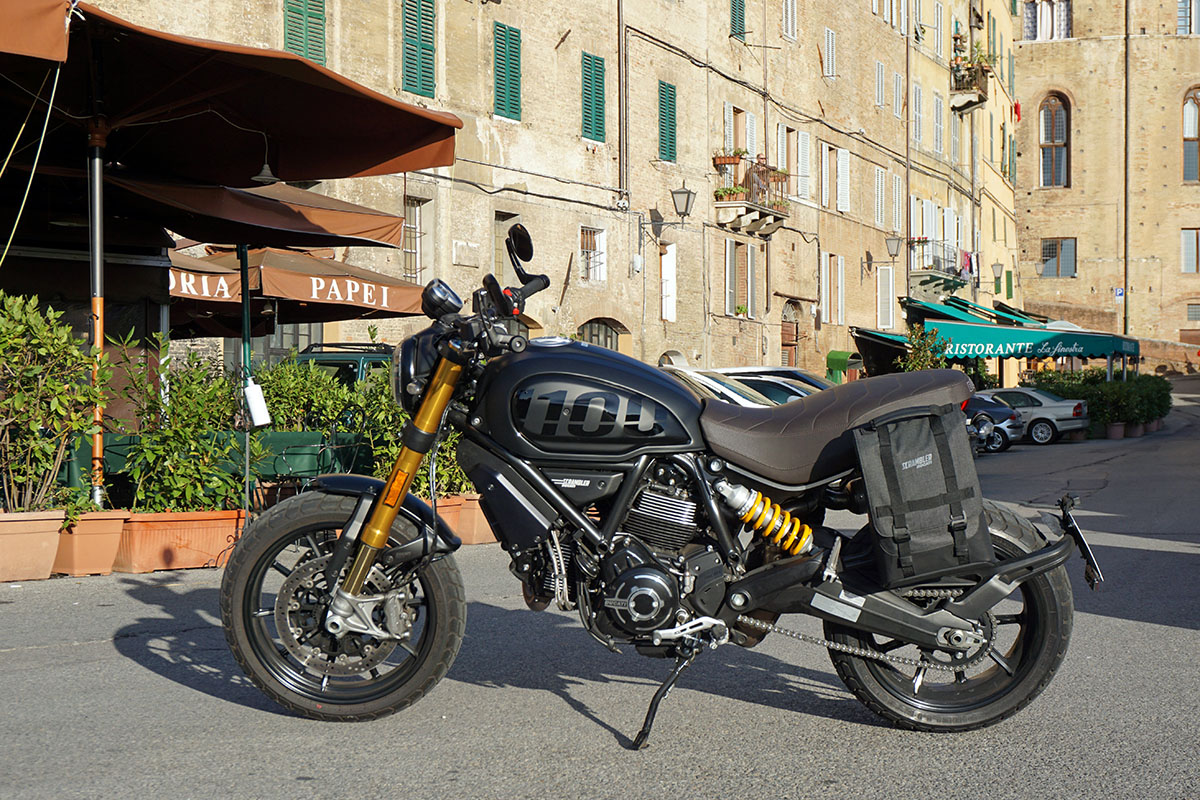 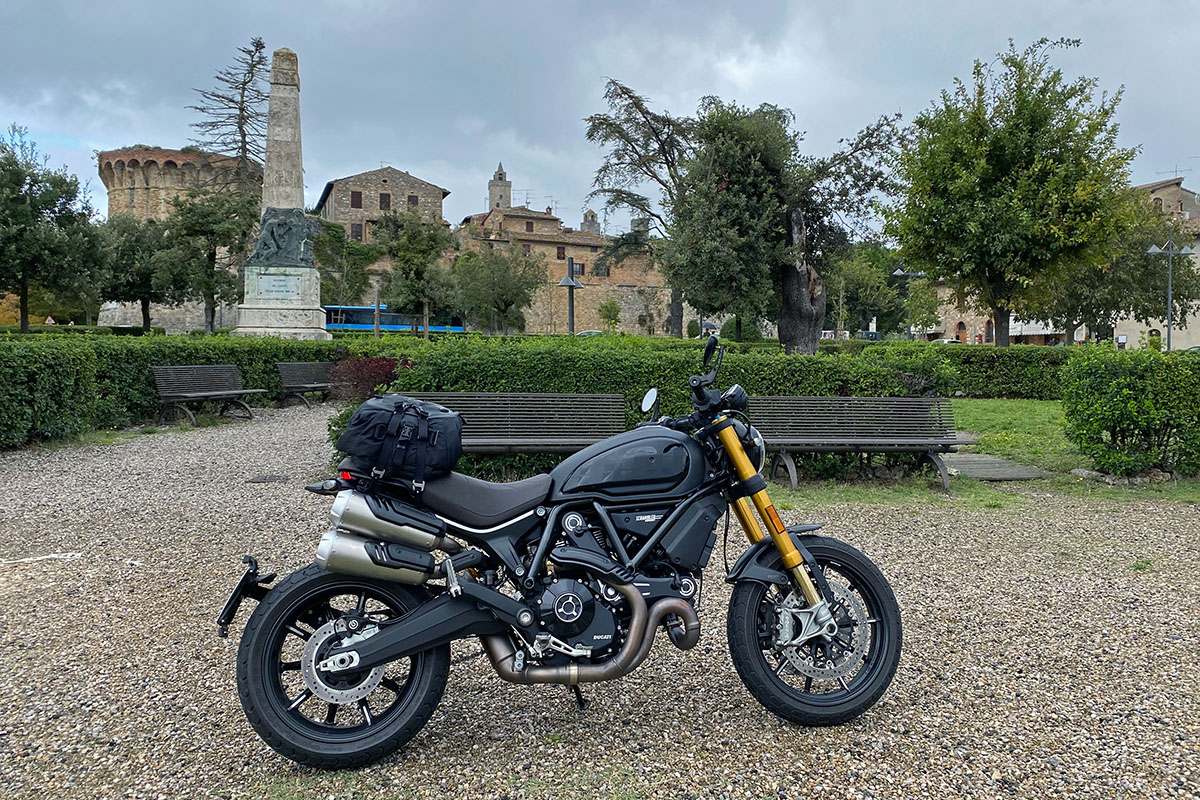 TROUGH SIENA ON THE TRACKS OF JAMES BOND

In the movie “A Quantum of Solace”, James Bond arrives in his Aston Martin in Siena, only to disappear into a tunnel in the historic city. On an earlier visit to Siena, I learned where it was. The tunnel is closed with a lattice gate, a lot of equipment is stored inside and nothing points to the former filmsetting. In Piazza del Campo I enjoyed a very atmospheric sunset. The famous horse race “Palio di Siena” takes place twice a year in Siena’s most important square. Since my favorite restaurant La Finestra had unfortunately closed, I took a snack right at the place.

DARK CLOUDS ON THE WAY TO SAN GIMIGNANO

In the morning the weather in Siena was still wonderful with cloudless skies. I took the opportunity to take a trip to the historical center. Soon the first clouds rose and I made my way to San Gimignano. The air-and oil-cooled 1,079 cm³ two-valve L-twin engine of the Scrambler Sport PRO revs up immediately. It is a further development of the engine from the Monster 1100 Evo built until 2013 and produces 85 hp/62 kW at 7,250 rpm. The maximum torque of 90.5 Nm is already available at 4,750 rpm and thus requires very few gear shifts. The engine pulls strongly from 2,000 rpm, I had the feeling of sitting on a more powerful motorcycle.

The sound is core and sounds really good. Gearing down and getting off the gas is often accompanied by a lustful blast from the right-side dual tailpipe. The path first led me to the Castello di Monteriggioni. In San Gimignano, the dark sky had turned into rainy weather. So I rode back on the SP1 to Montelonti. Since it looked very dark in the east, I decided to continue in the north-west direction and took a small detour on my way to Florence. 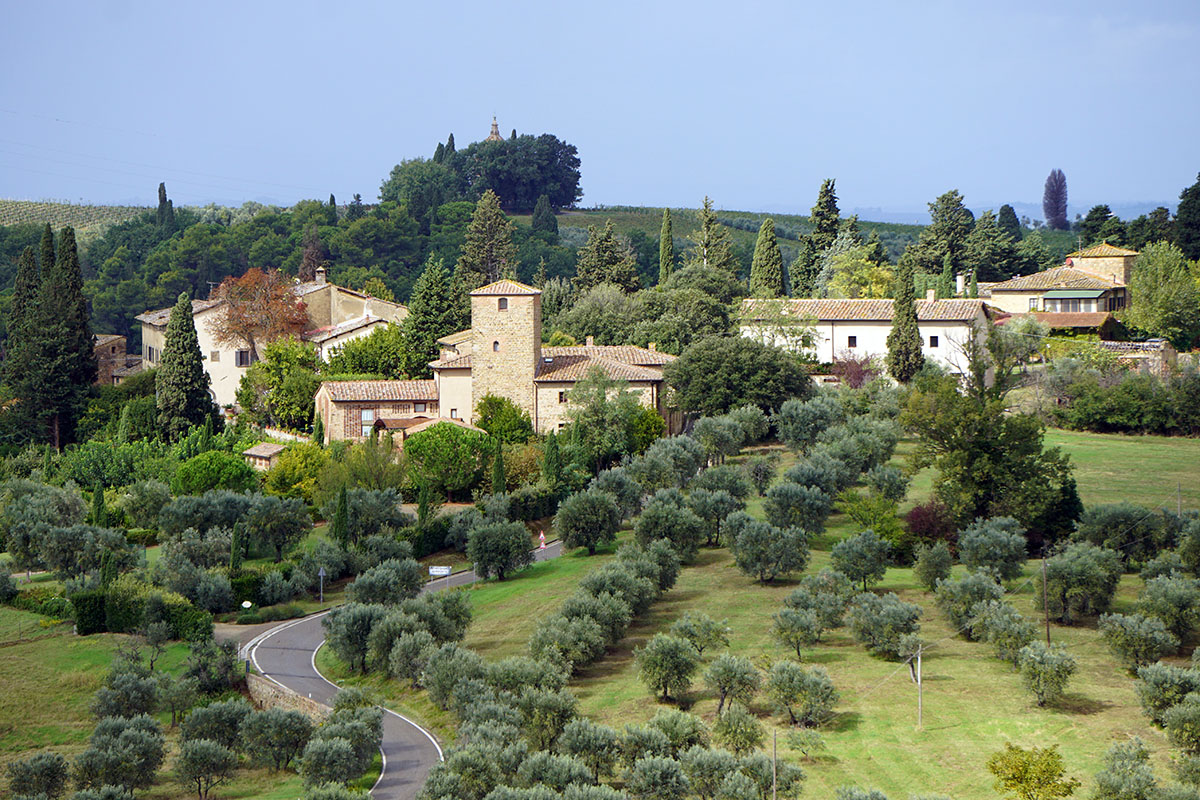 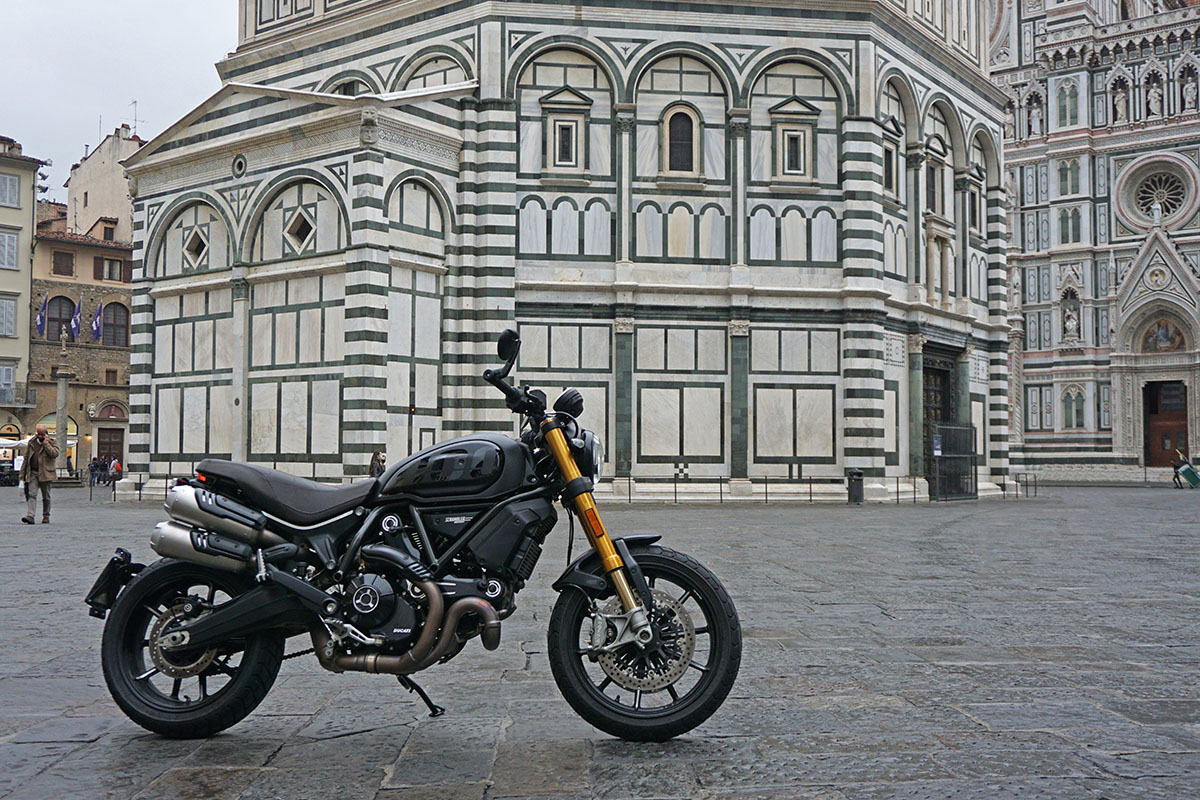 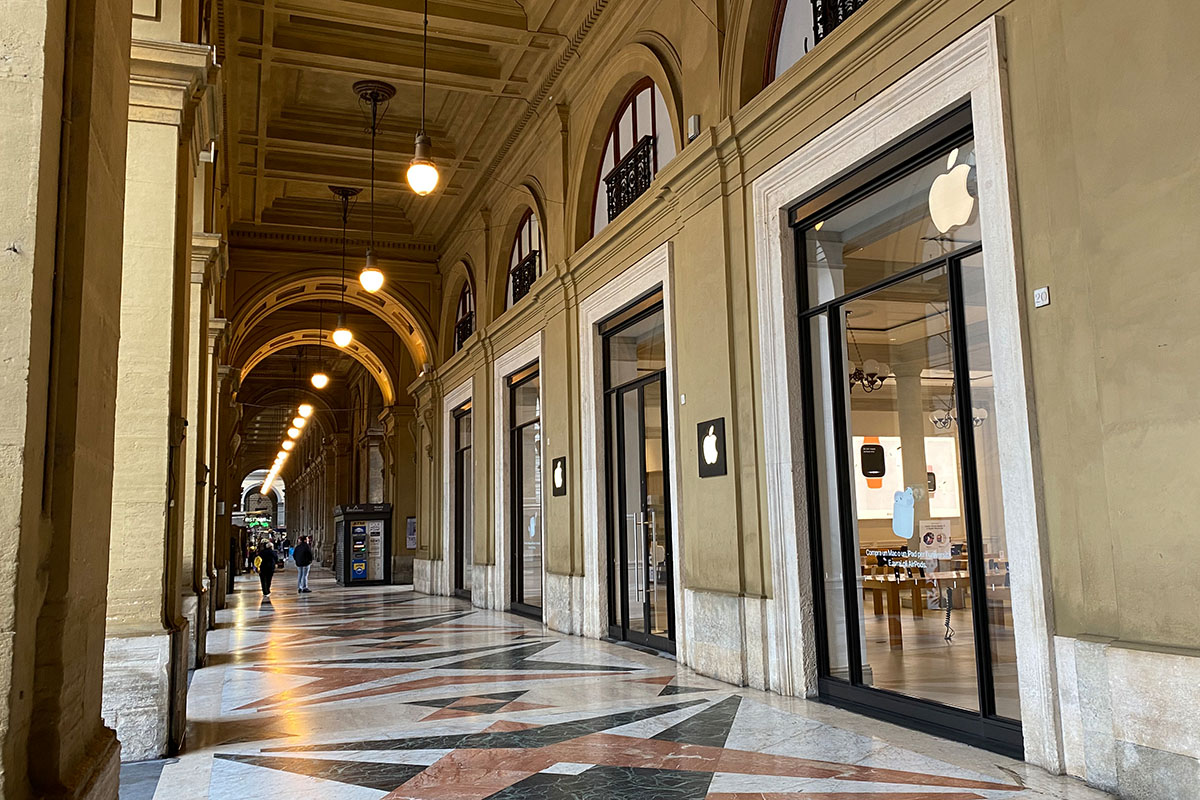 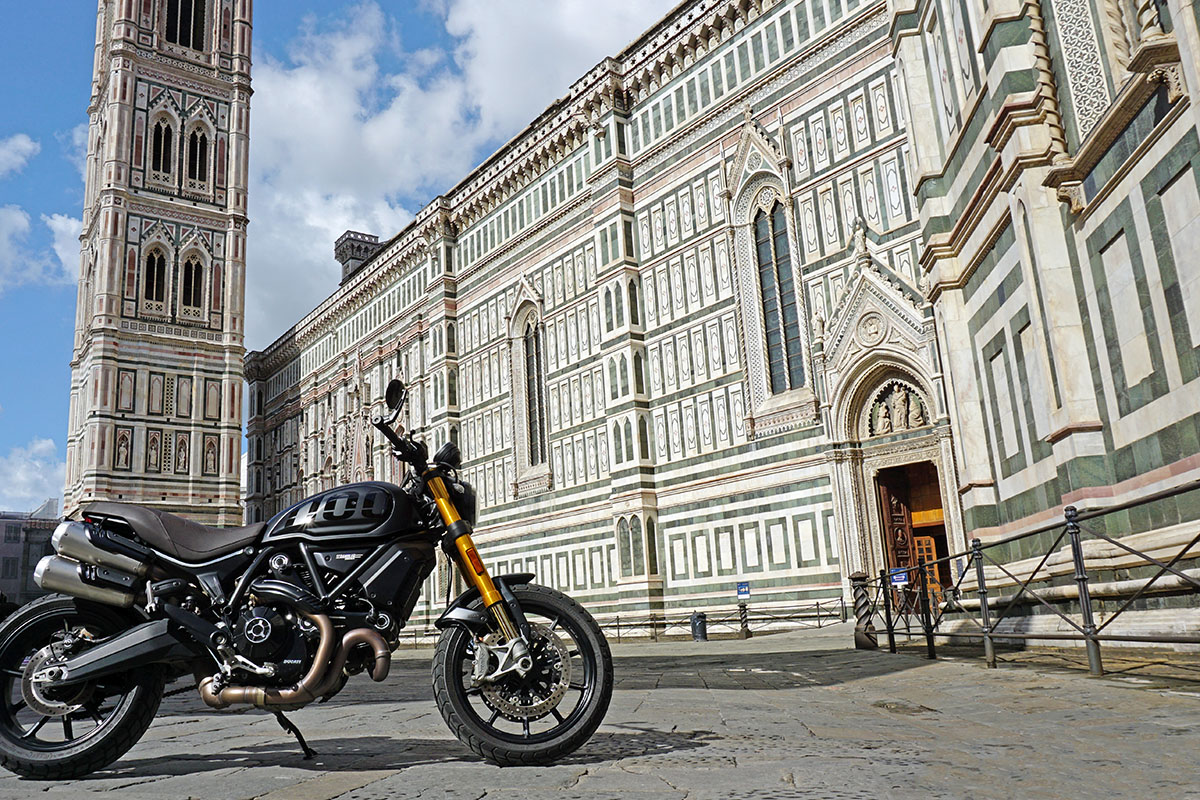 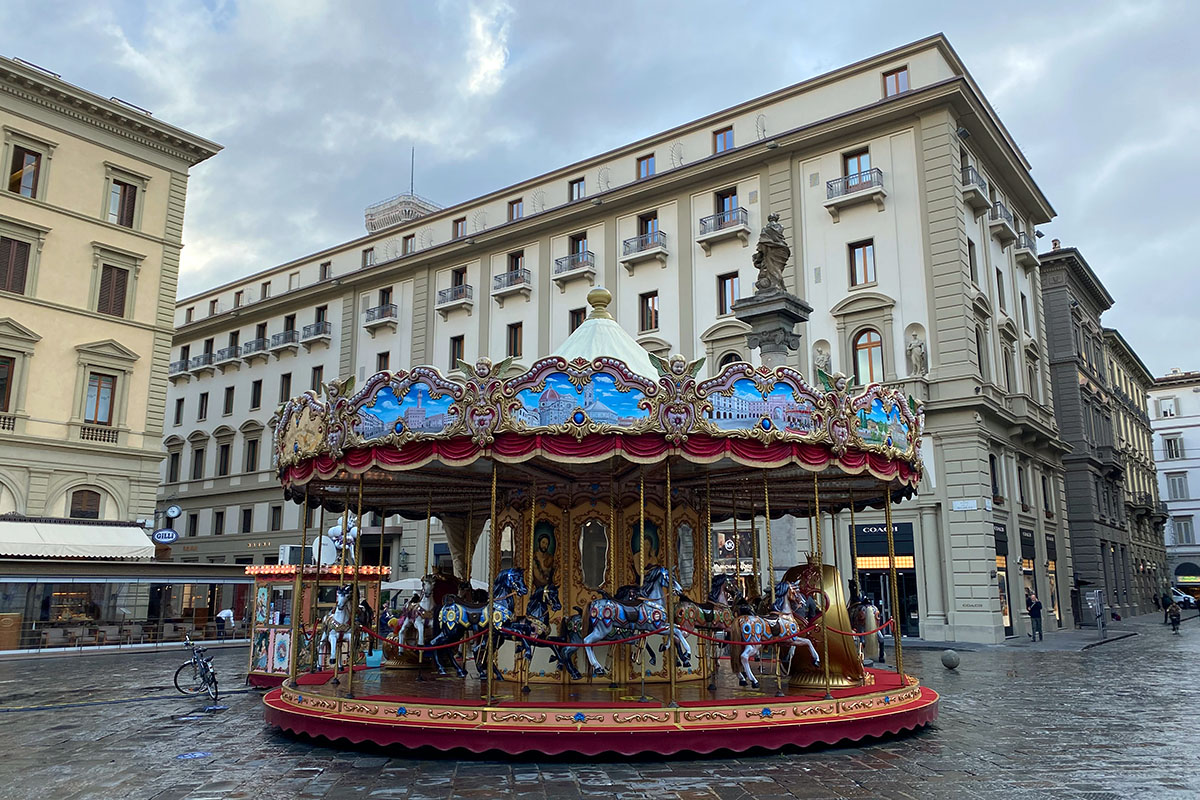 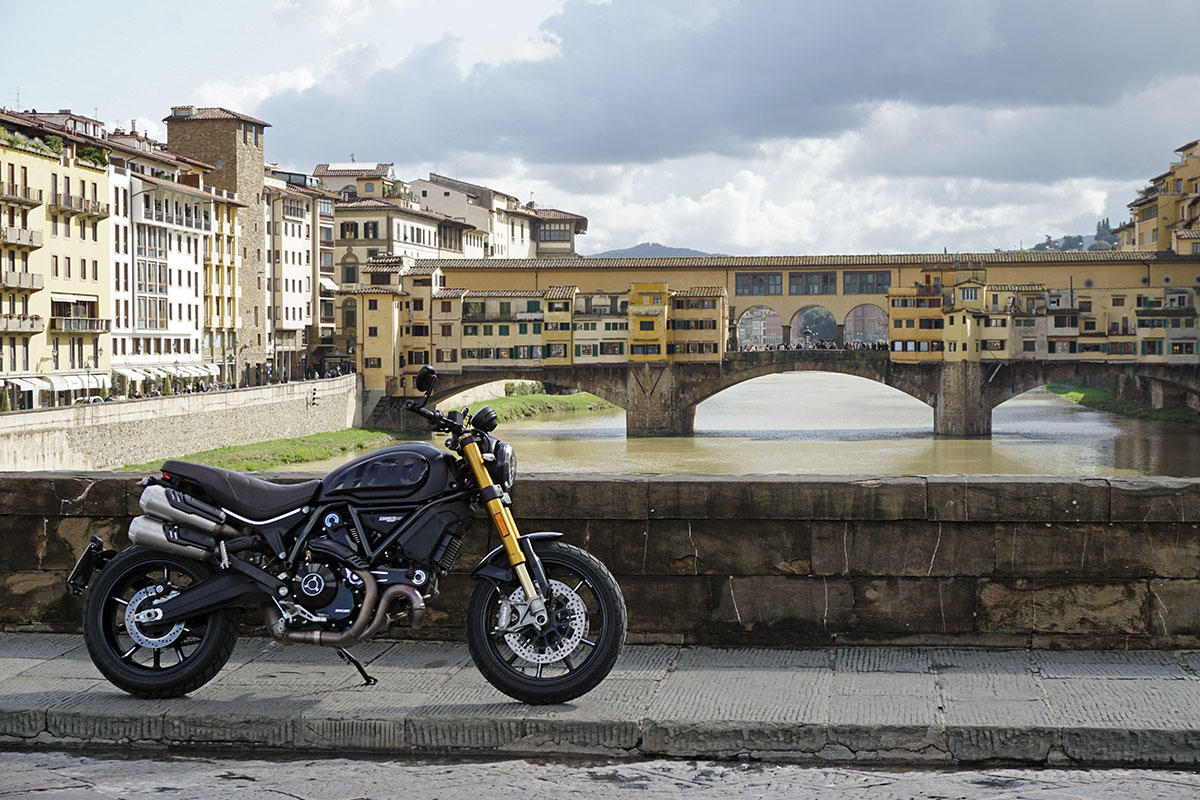 In Certaldo I left the SP95 to take course to the east. The small side roads were very curvy. The low handlebars and the dynamic, forward-leaning seat position invited me to take advantage to every curve. It was a real pleasure. The wide handlebars and the comfortable seat make long rides very comfortable. Near the estate Borgo Petrognano the first rays of sunshine made it through the clouds after the rain and it stayed dry until I arrived in Florence.

IN THE CENTRE OF FLORENCE

My accommodation was located in Piazza della Repubblica in the centre of Florence near Piazza del Duomo. In many Italian cities traffic is limited. Many of these so-called “Zona a Traffico Limitato (ZTL)” do not apply to motorcycles. This makes travelling by bike much easier than travelling by car. After I had freed my scramblers from the dirt from the wet ride, I drove a small round around the city. After a rainy night the weather calmed down next morning. I walked by the carousel “Antica Giostra Toscana” on my way to breakfast at Caffé Gilli, the oldest coffee house in the city. Before I left the city, I also visited the famous Ponte Vecchio and the Cathedral Square.

The way to Bologna first took me up the bends to Fisole and on through the scenery of Tuscany to the F1 and MotoGP speedway “Autodromo Internazionale del Mugello“. From there runs the SP503, which is highly recommended for its curves. Halfway to Firenzuola, I crossed the Passo del Giogo at 882 meters above sea level. Soon back on SS65, were the tour started, I went back to Bologna. 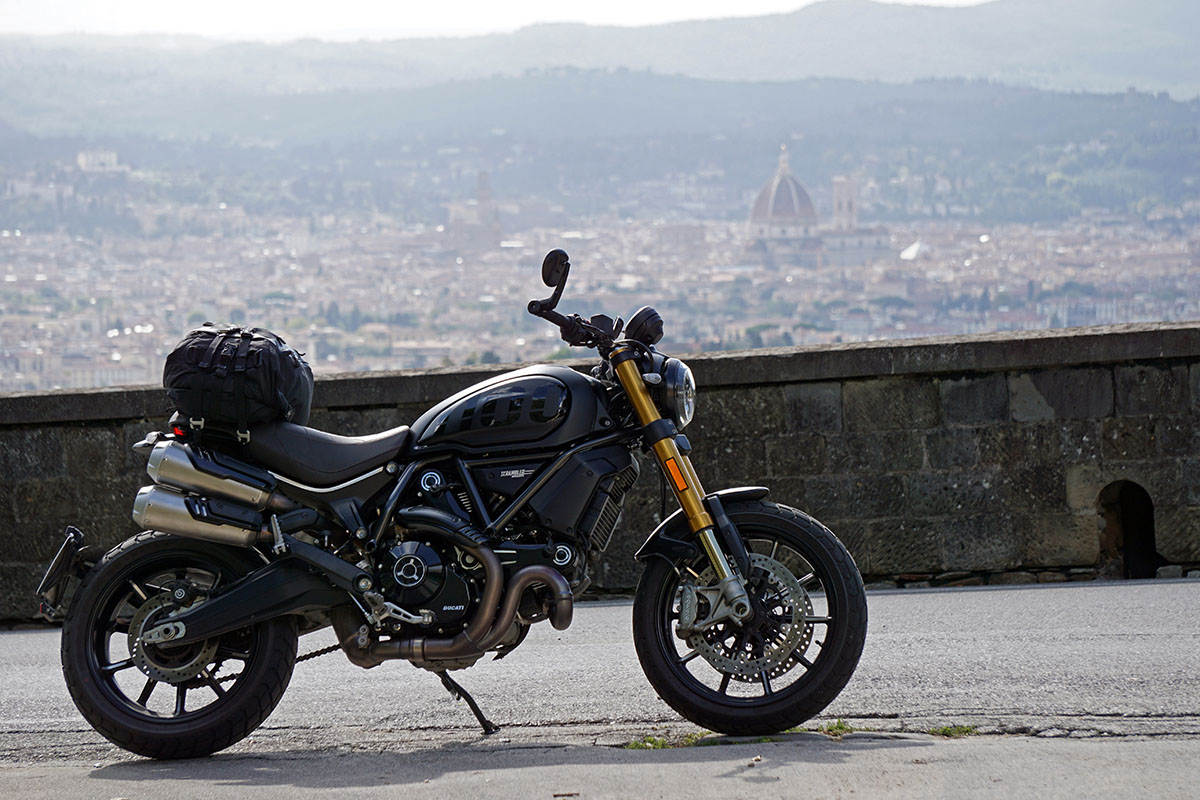 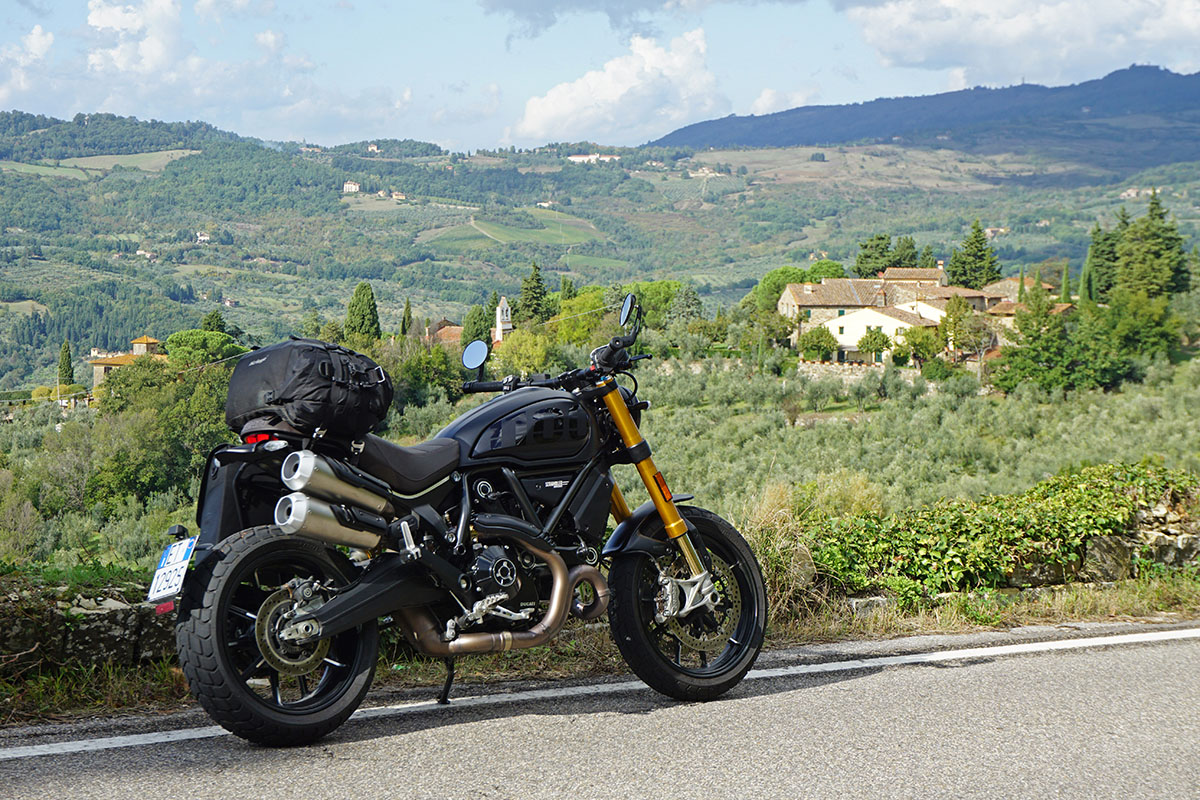 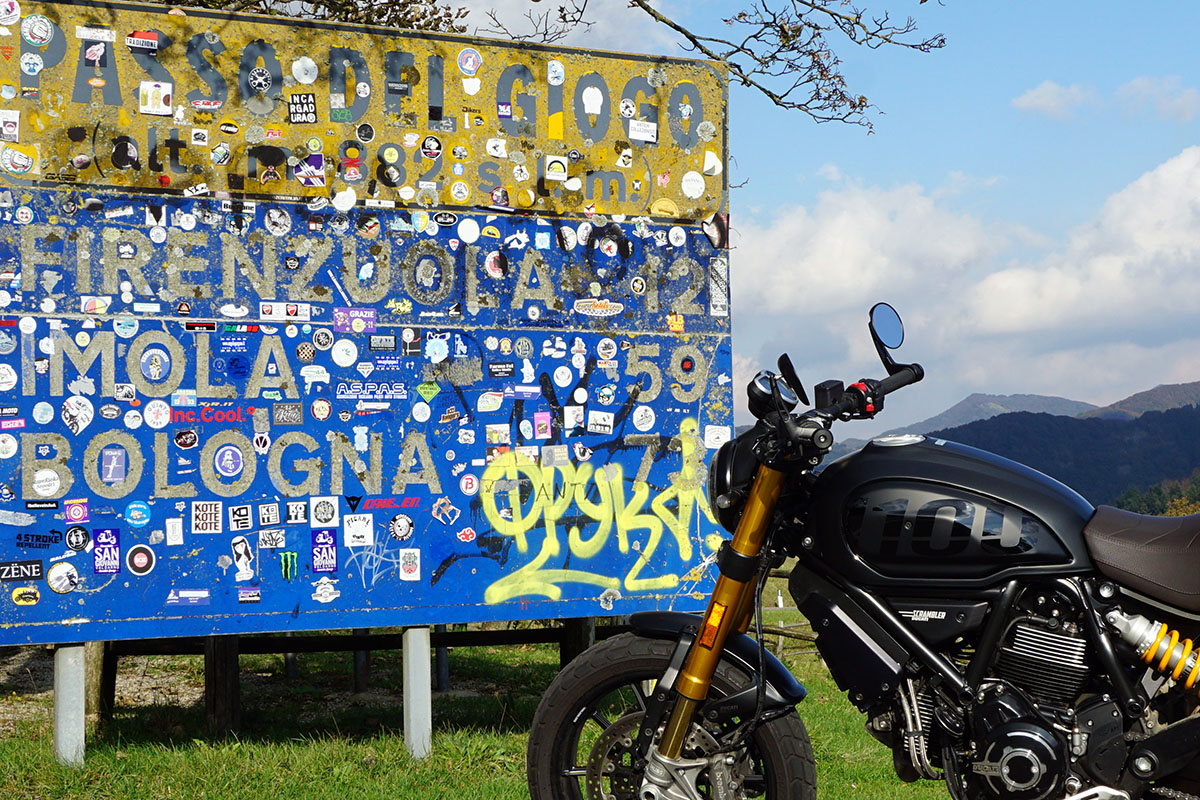 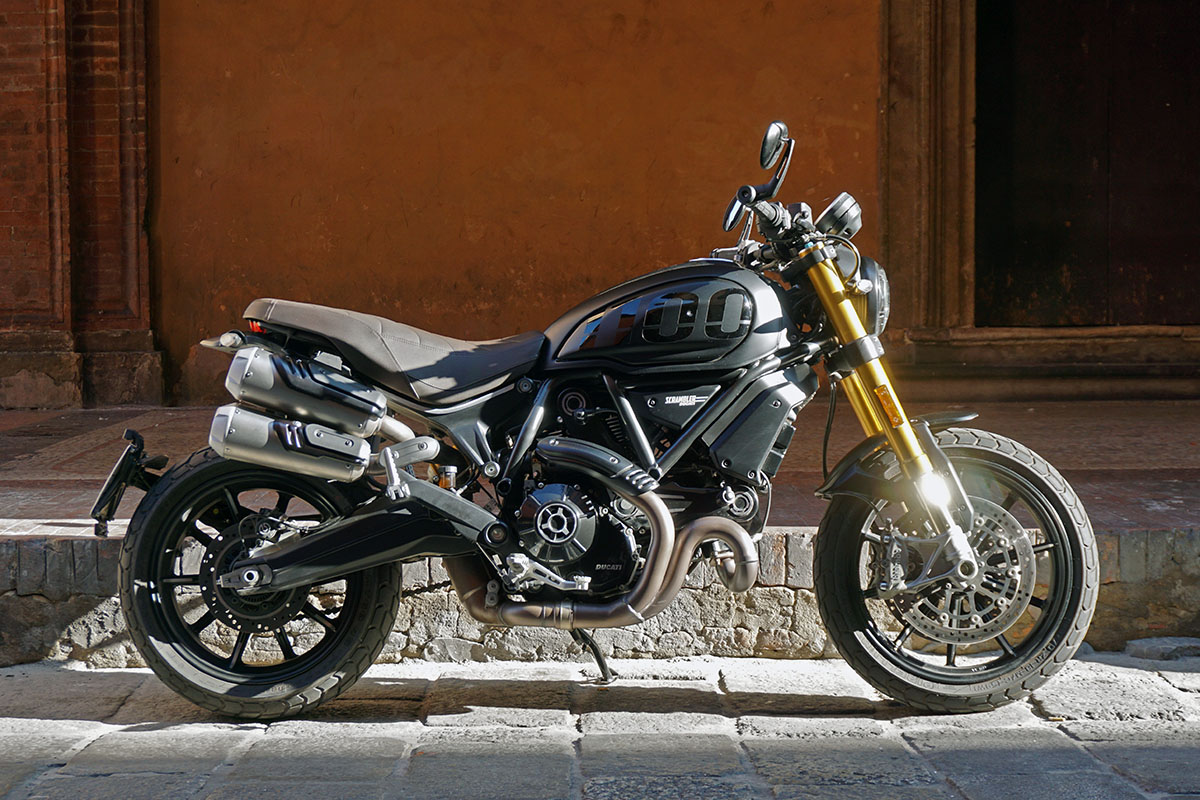 A motorbike tour through Tuscany in October is a highly recommended experience. The nights can be a bit chilly, but during the day the weather is ideal for motorcycling. The Ducati Scrambler 1100 Sport PRO proved to be a very versatile bike on the tour. From a casual tour through the city to a multi-day trip through the countryside, everything is possible with this bike. Relaxed cruising and dynamic cornering are both possible. The fashionable side mirrors and a matte black finish with painted logos on the side panels underline its stylish overall appearance. With a price of 12,795 Pounds (United Kingdom), the Scrambler 1100 Sport PRO is certainly not a bargain, but nevertheless an attractive offer, due to the equipment included and its excellent workmanship.