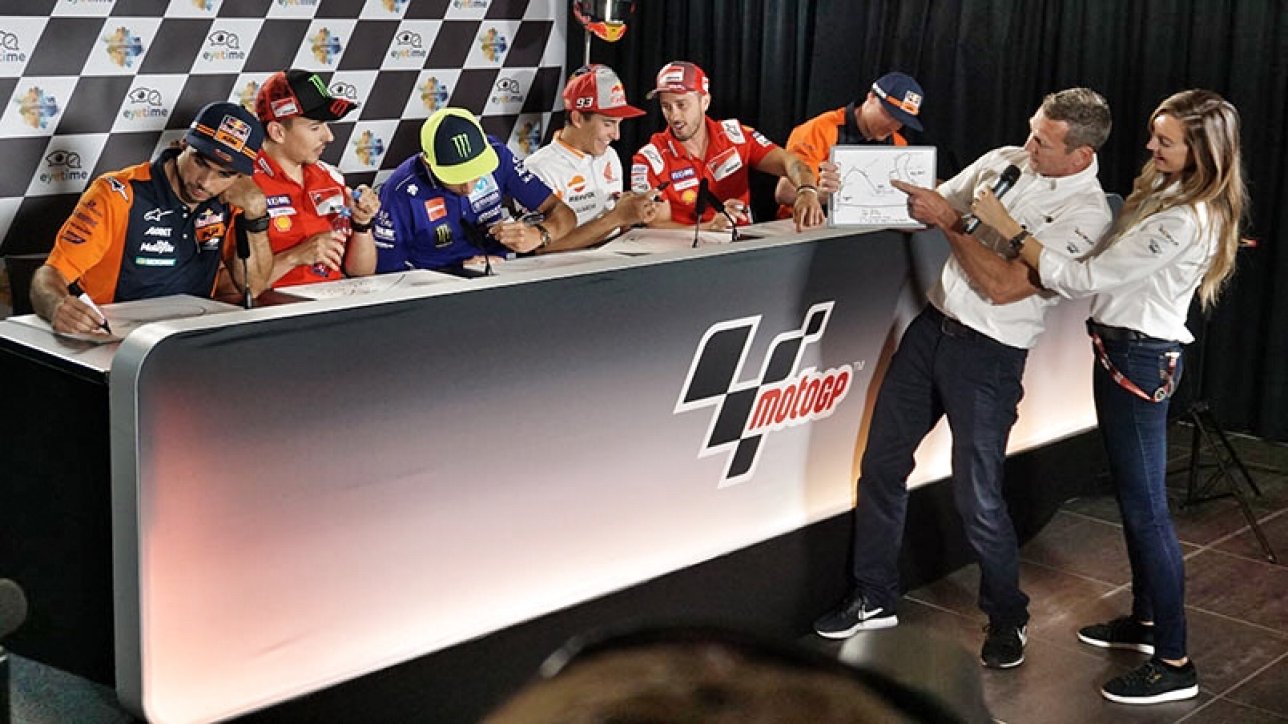 Spielberg | Red Bull Ring – At the first official press conference of this year’s motorcycle Grand Prix of Austria, the last question to the driver led to exhilaration and a boisterous mood. On Facebook, a fan asked how the stars imagine their absolute dream track…

As usual, at the beginning a question and answer session moderated by a MotoGP officer was on the program. In retrospect, Marc was satisfied with his third place at the last race in Brno, especially in regard to the World Cup title. Tests would have brought some interesting findings on Monday. The possible fight for the victory with the strong Ducati here in Spielberg would be lovely, important is however primarily a podium again. 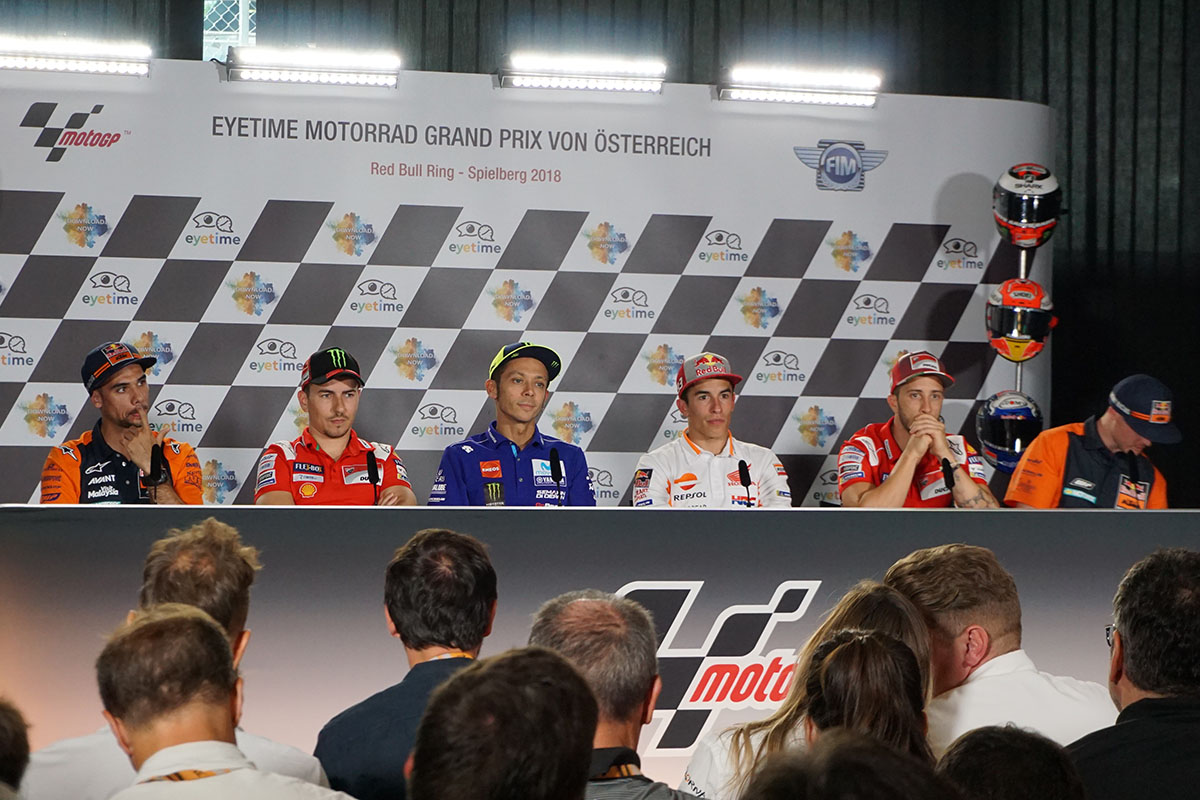 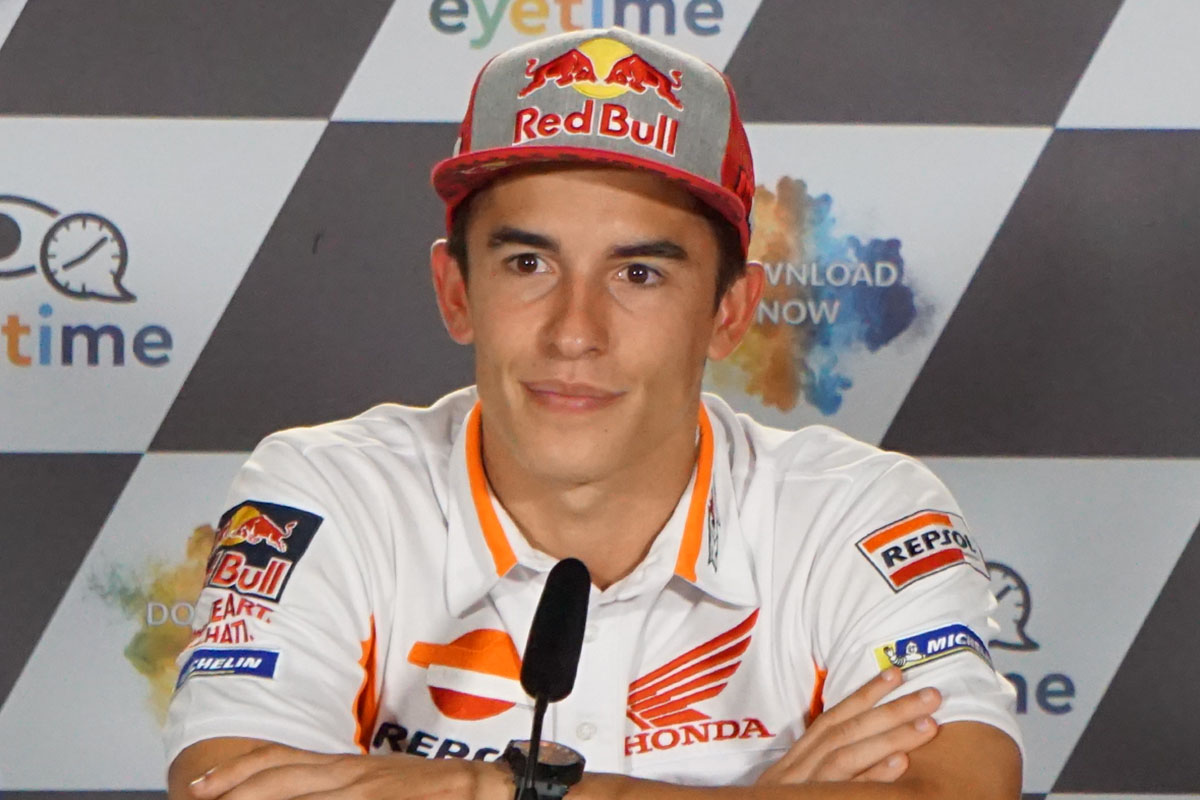 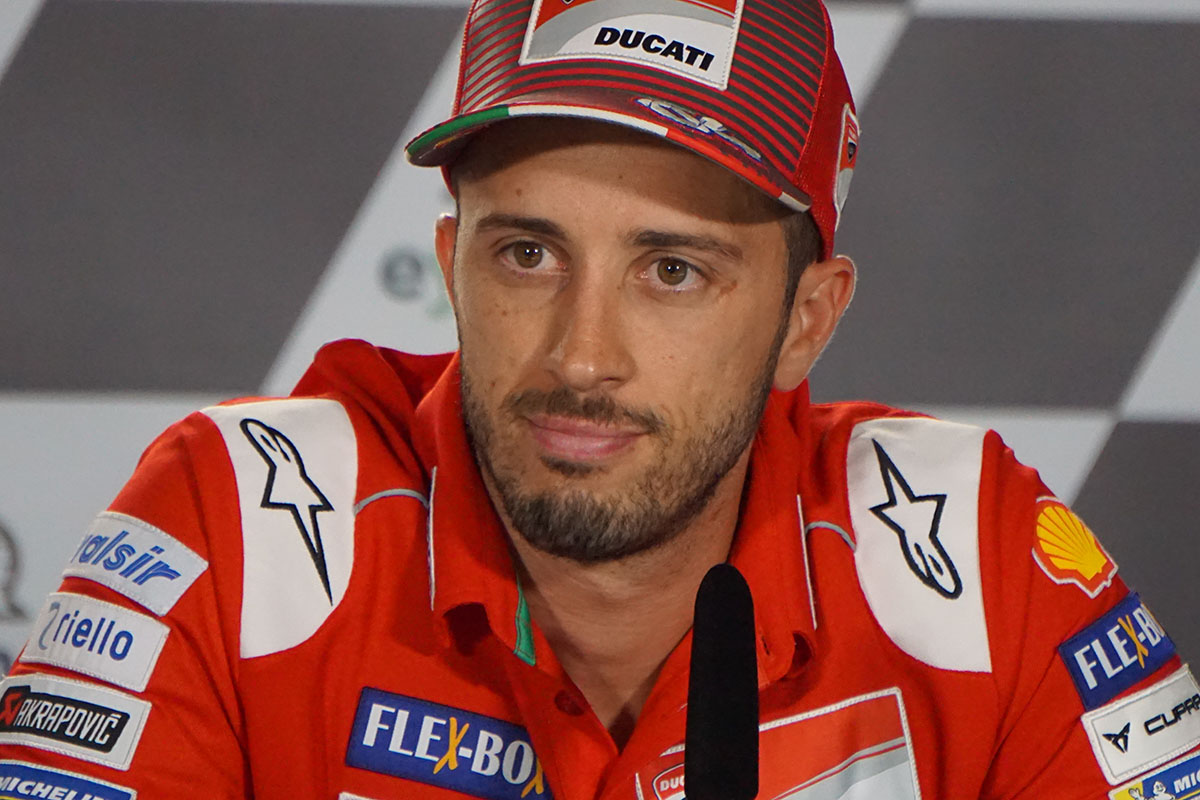 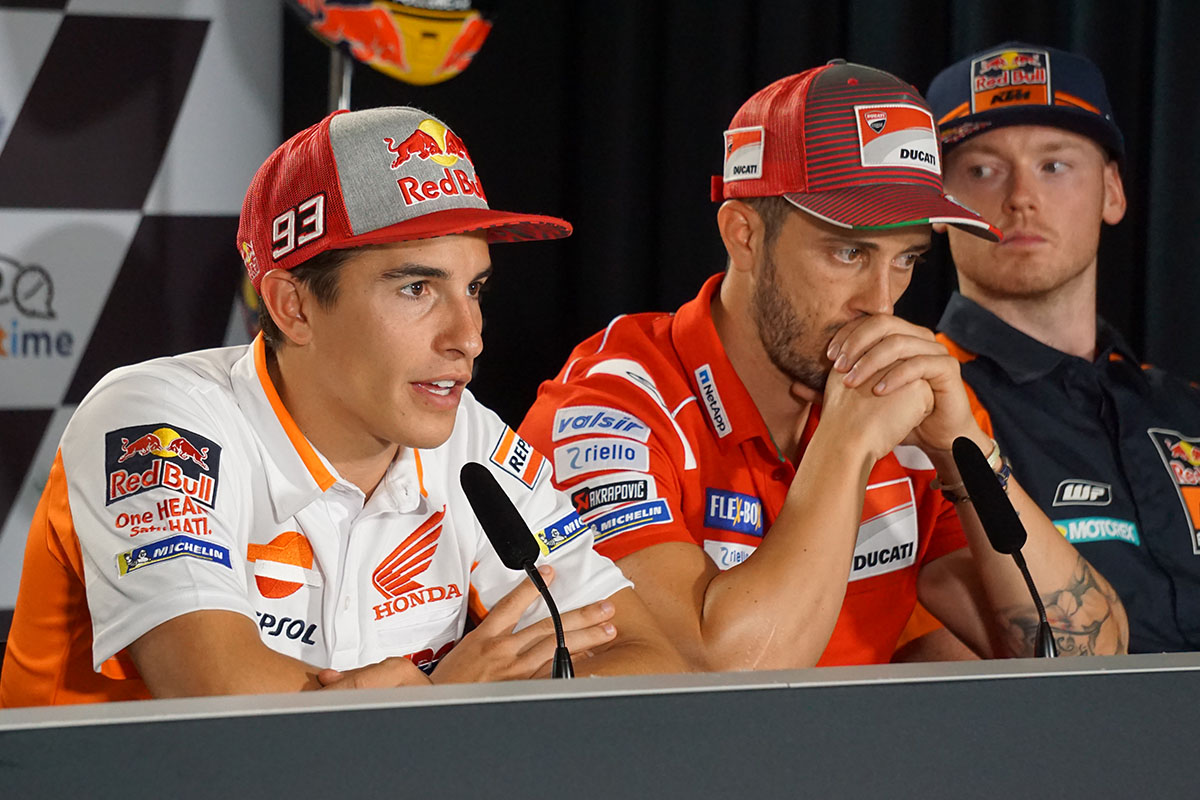 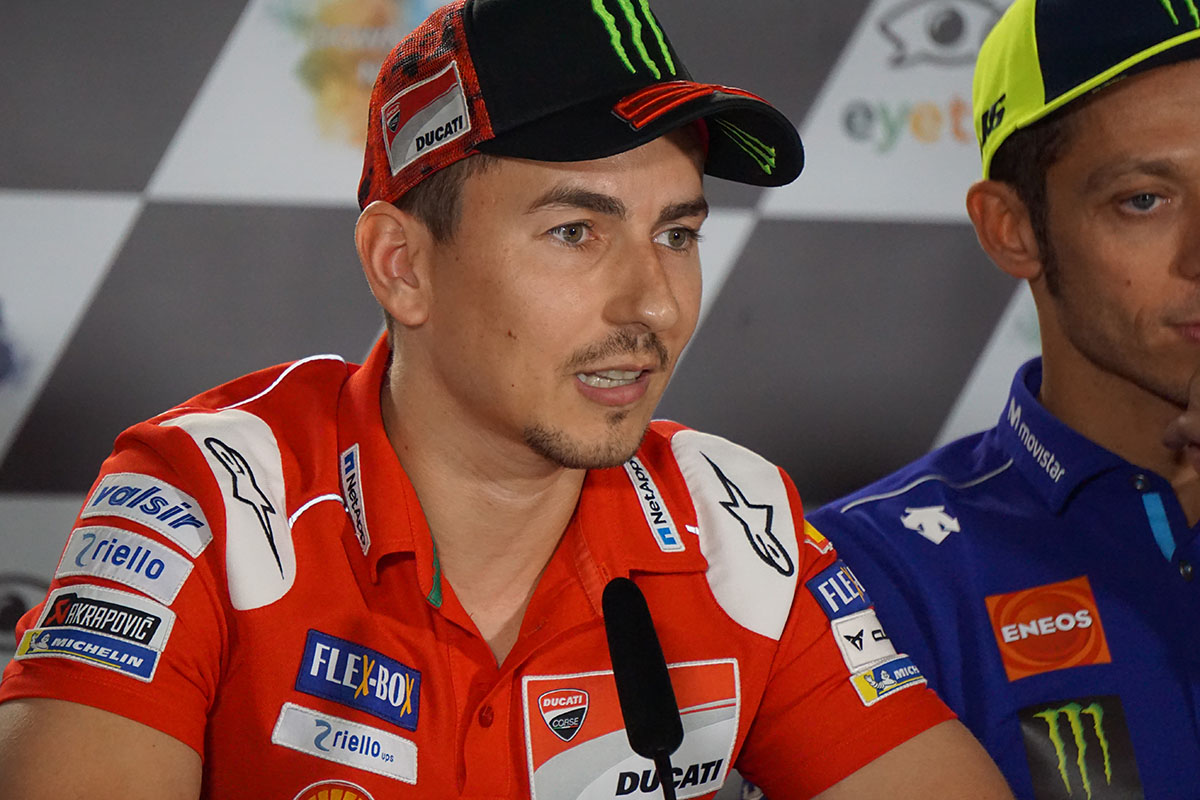 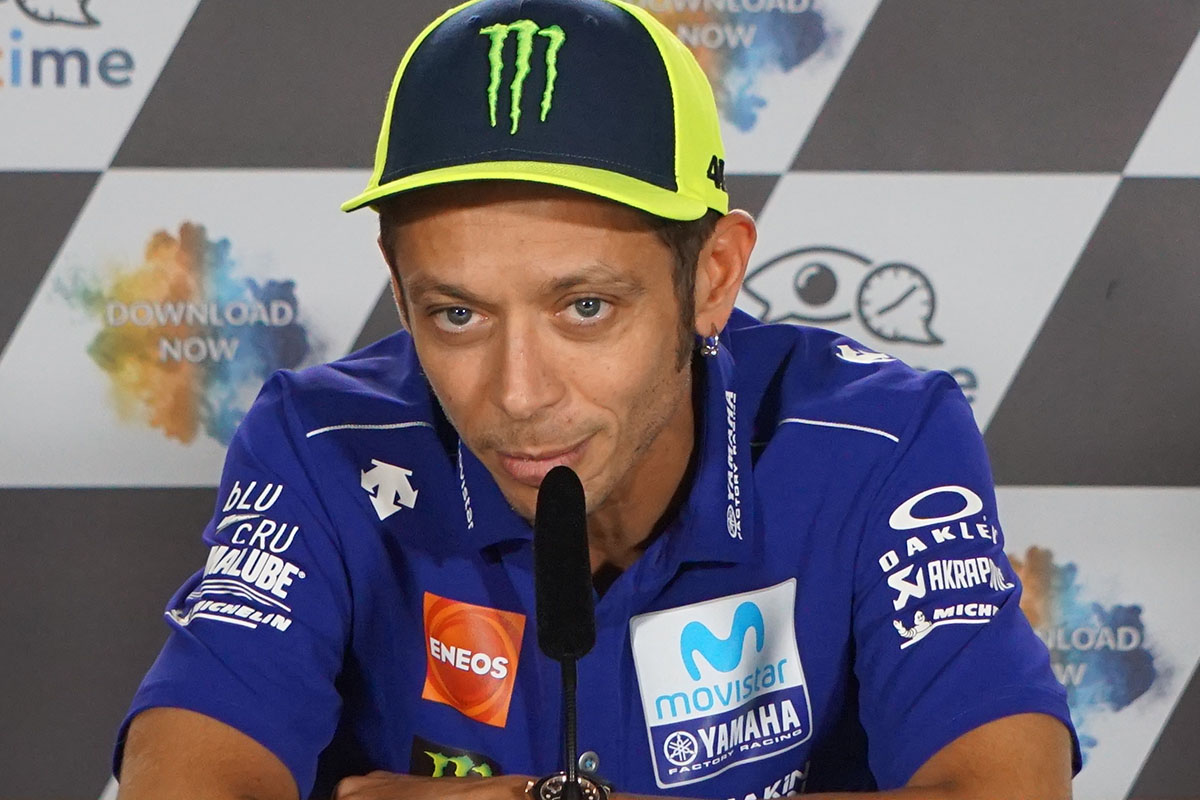 Valentino said the tests at Brno had brought no significant new findings but he will get out everything from his bike, what is possible. It is also not the ideal route for him and his Yamaha, his goal is simply to achieve the optimum. Andrea, last year’s winner and winner of the last race, came here with much confidence, the Ducati was strong at Red Bull ring and the competition would have caught up on the previous year.

Since winning at Mugello, another Jorge was again on the move, he said confidently. The Ducati run well, he feels strong and aiming to race for the victory. Bradley grieves on the one hand, that his team-mates Mika and Pol are out due to injuries, the advantage, however, is that now the whole team is focused on him. There is no much around to drive back in the top 10. 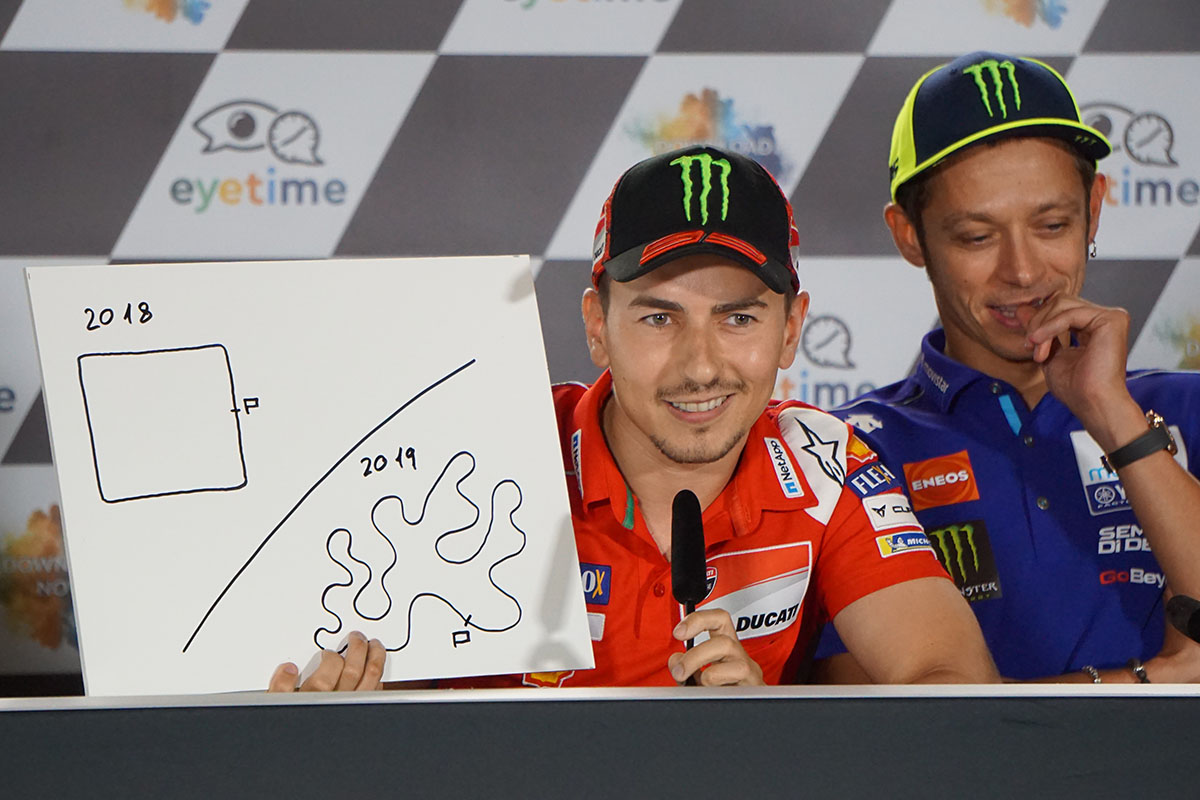 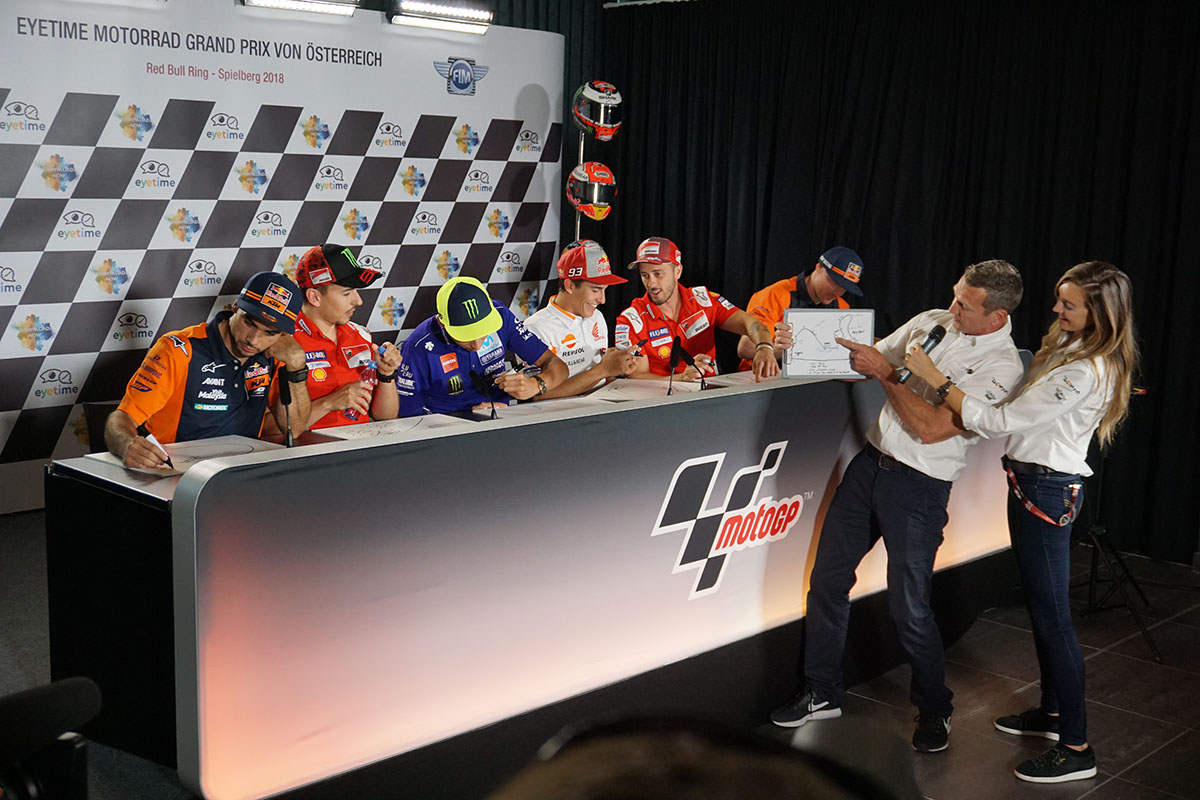 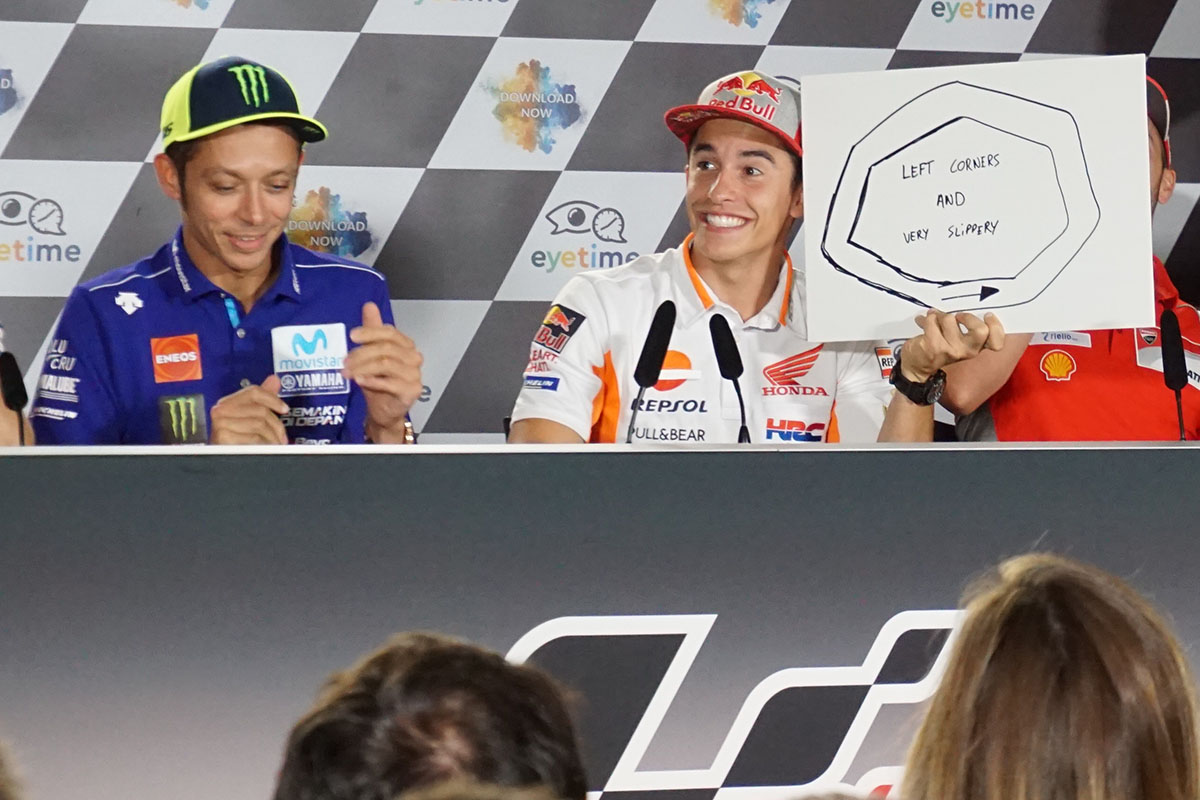 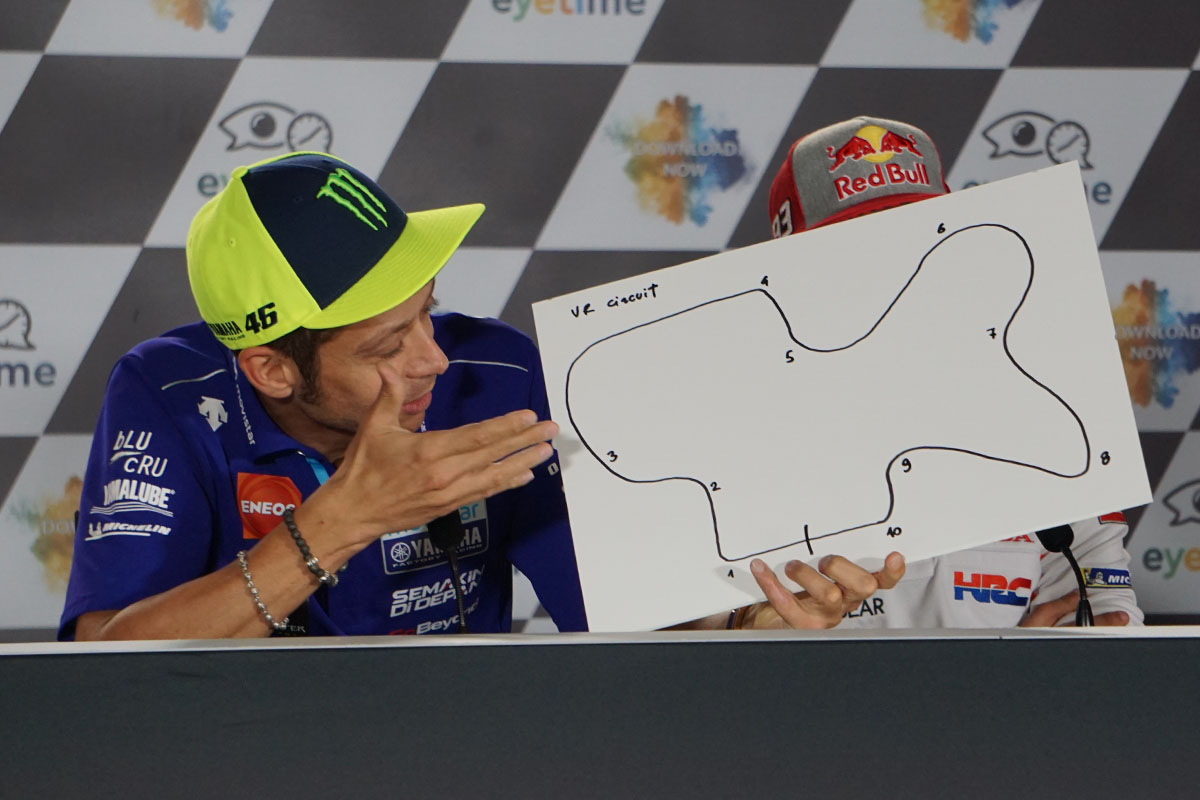 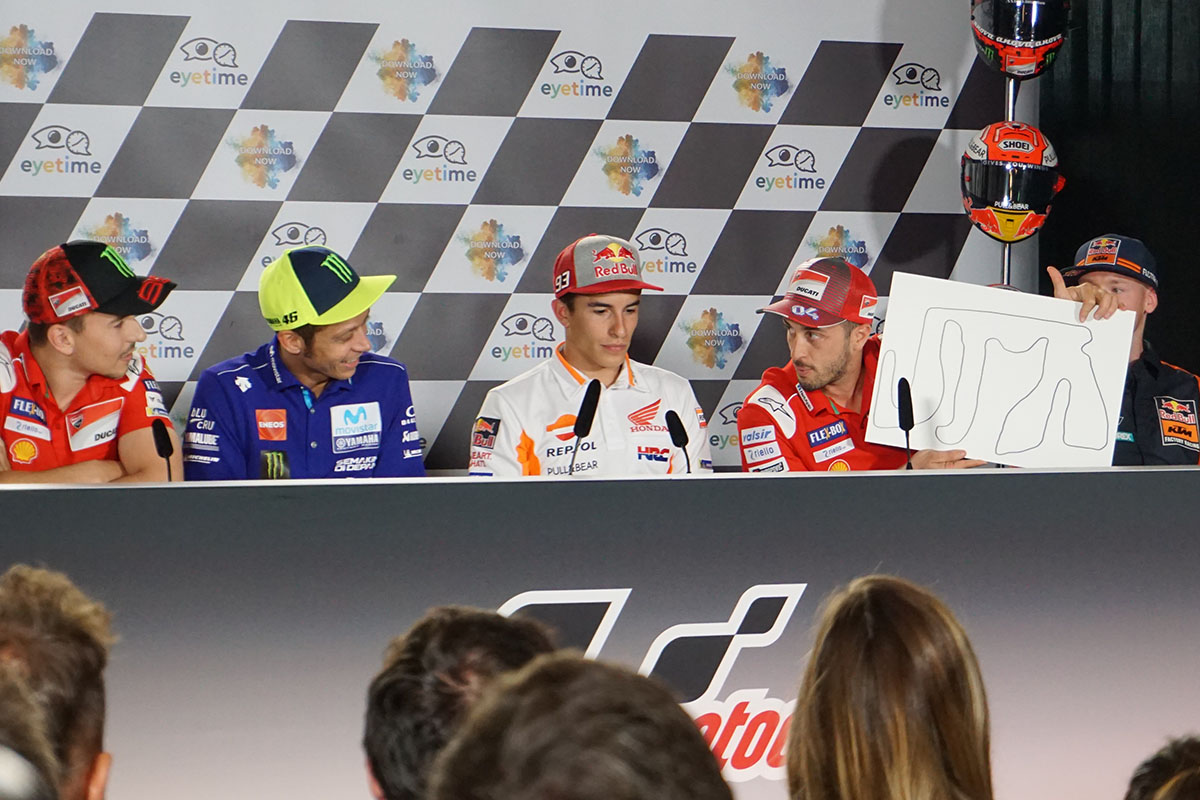 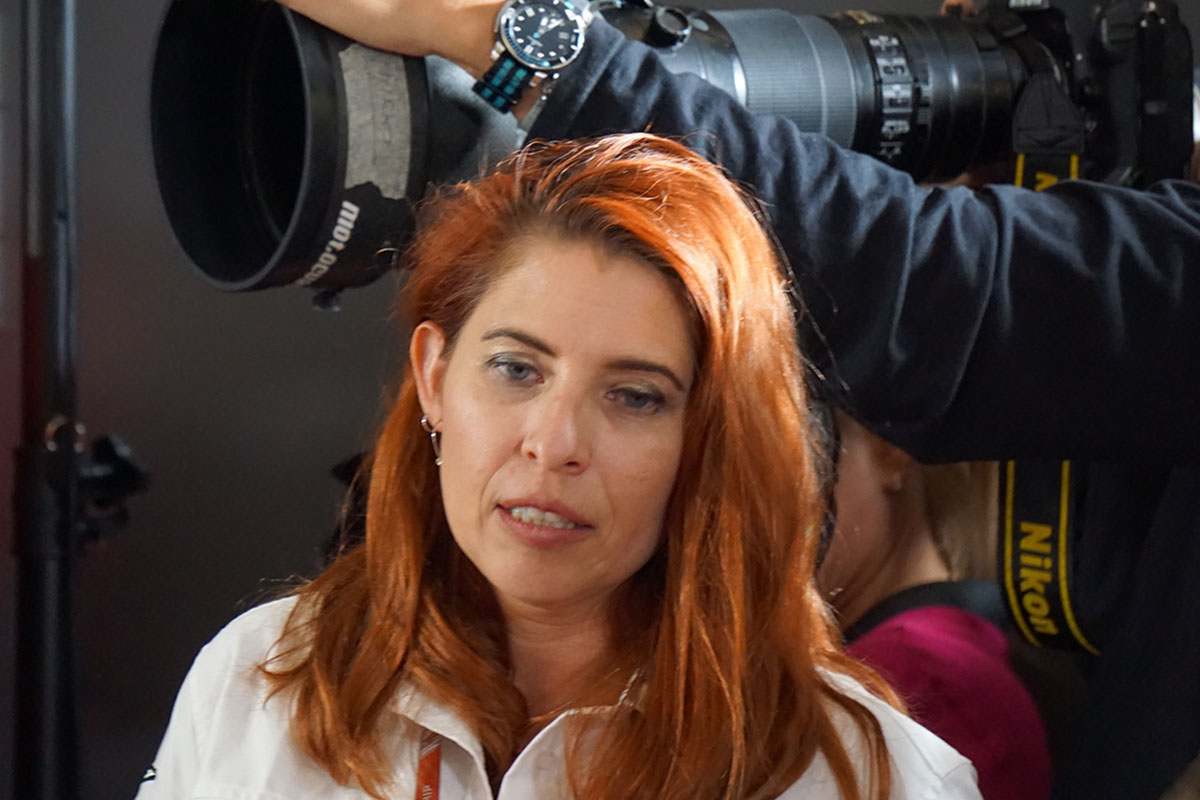 At the end the question was raised via Facebook, how the riders would imagine their favorite course. After the presentation of a course with highlights from several courses on the MotoGP calendar, the driver received panels to sketch their course of dreams. Various results came out of this, from very humorous to in detail thought through.

Jorge Lorenzo’s course was clearly an allusion to his year’s Ducati and Honda next year. The sensational Ducati can play out its strengths very well on the straight, the Honda performs in the tangle of curves better. Marc Márquez likes left turns and as slippery as possible. The Doctor had a scientific explanation ready befitting for his ideal race track for us. Andrea Dovizioso surprised and puzzled us with his version of a perfect race track. The background for this has not opened up me until now. 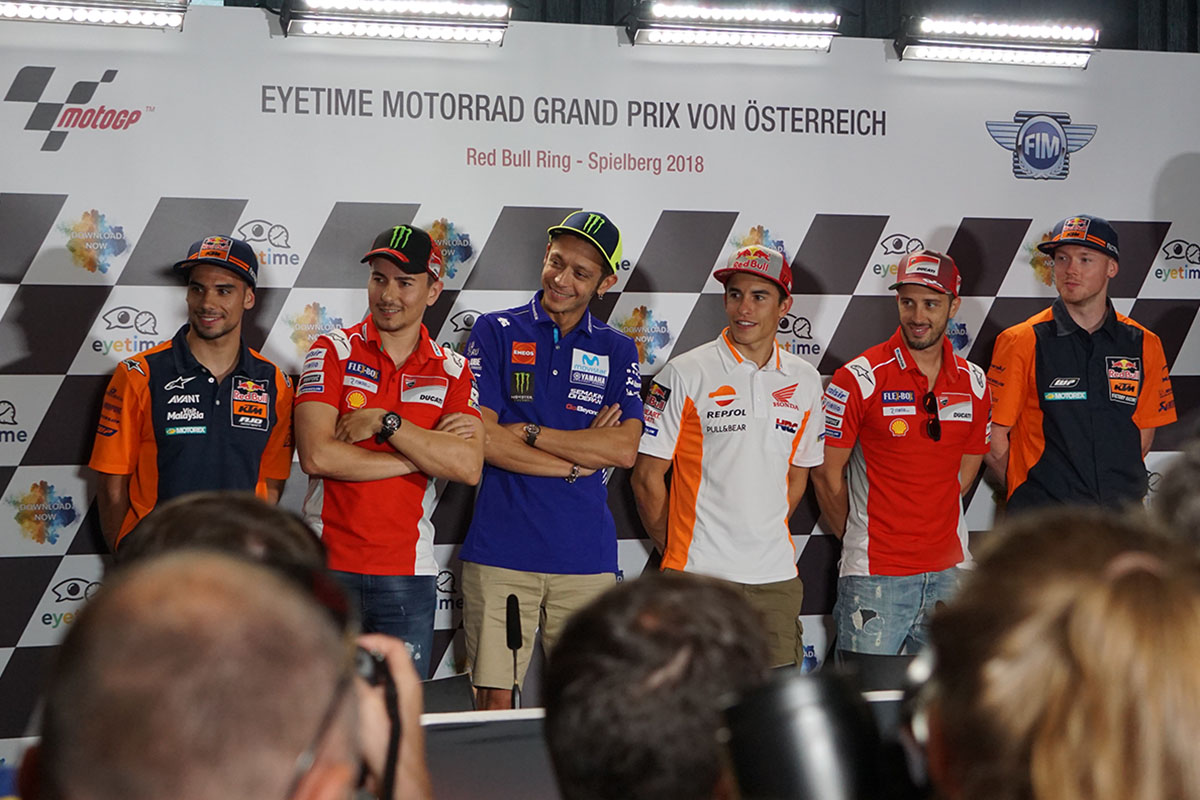 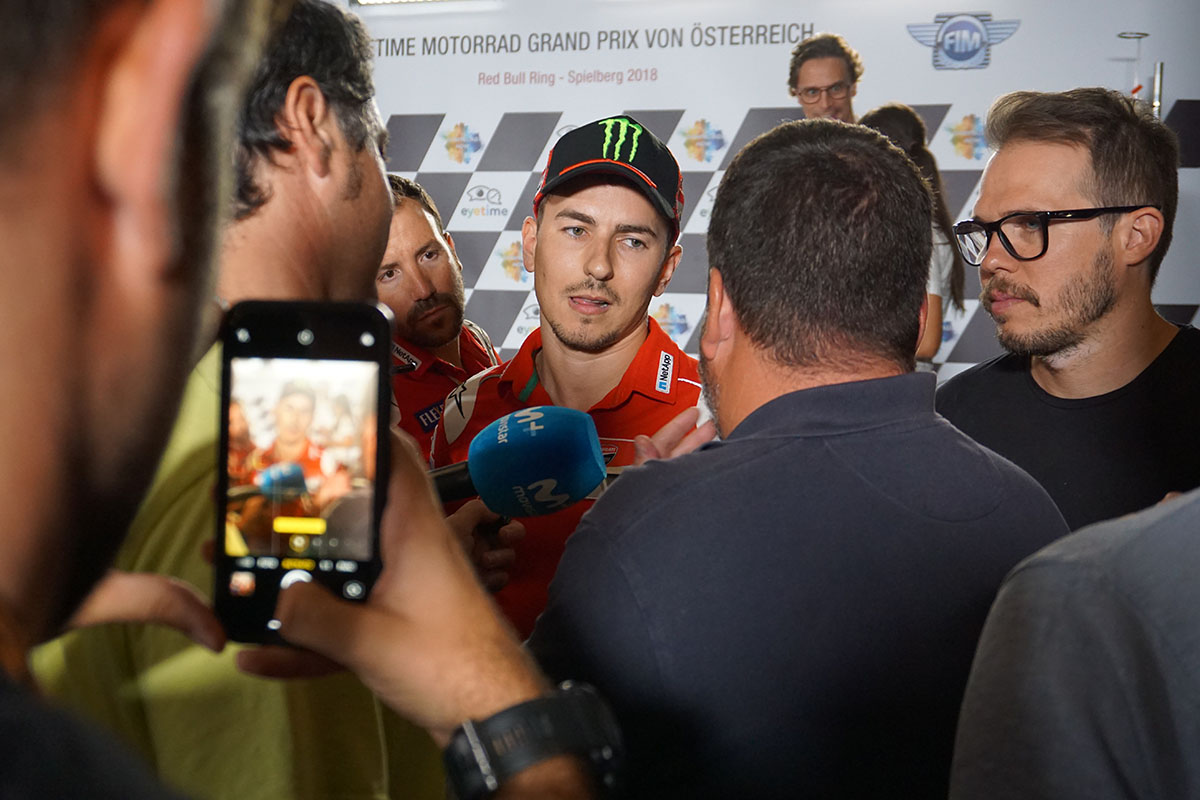 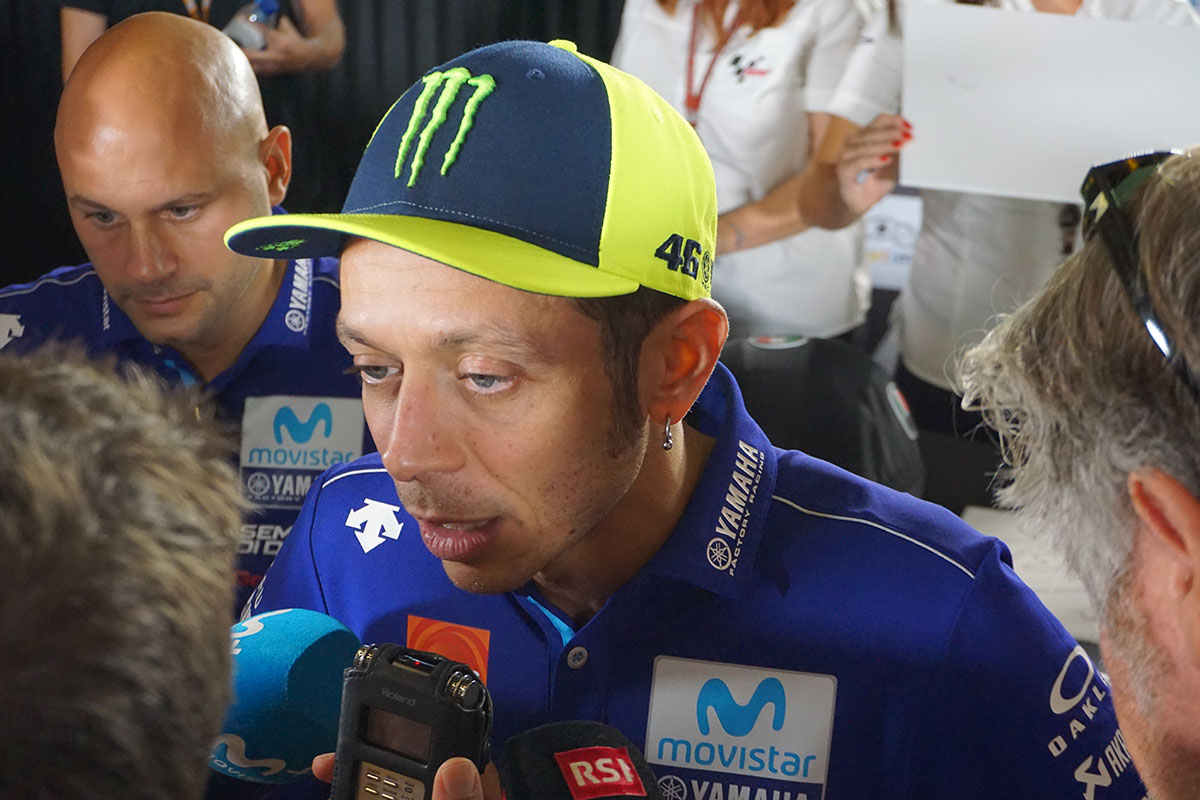 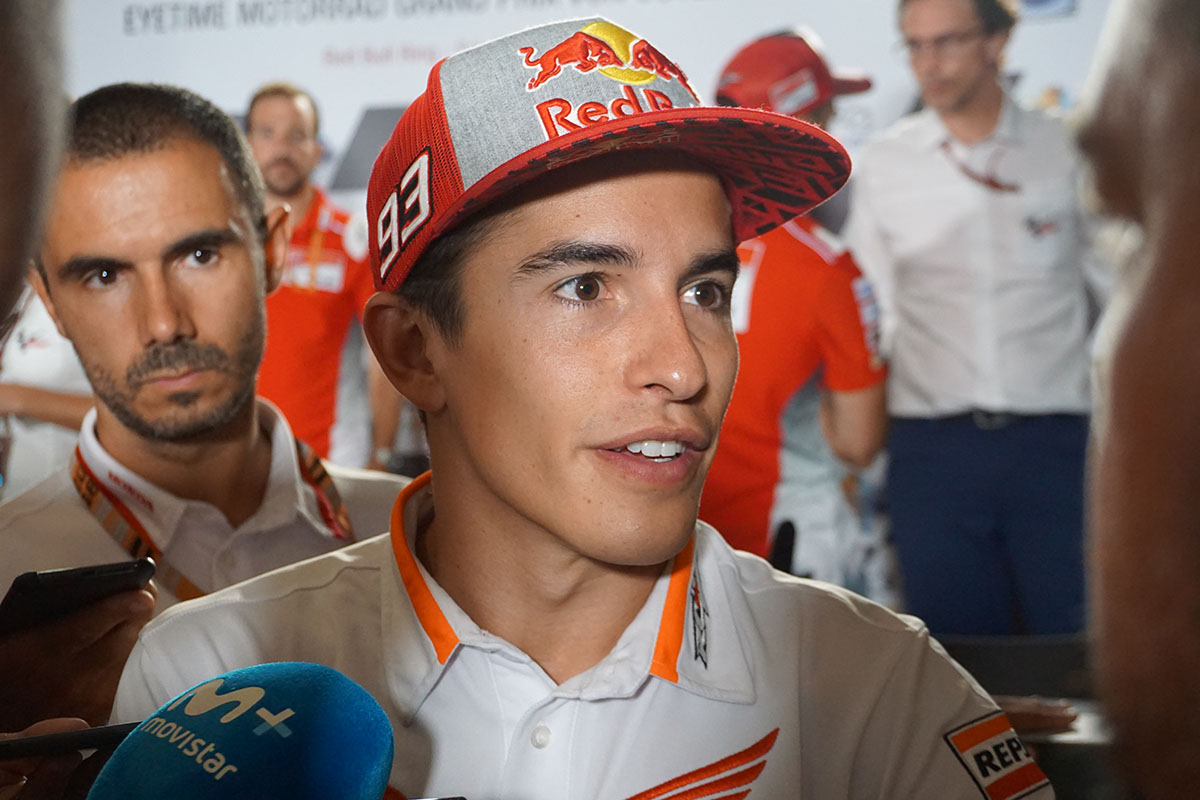 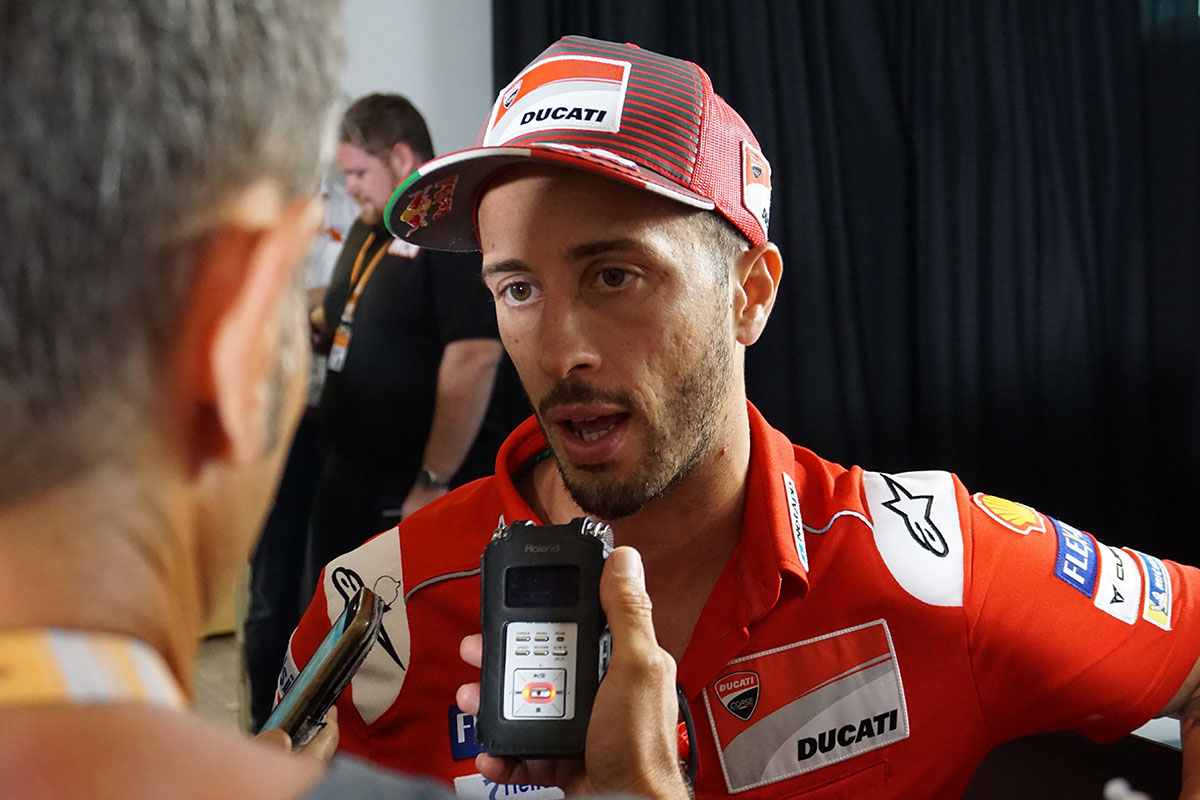 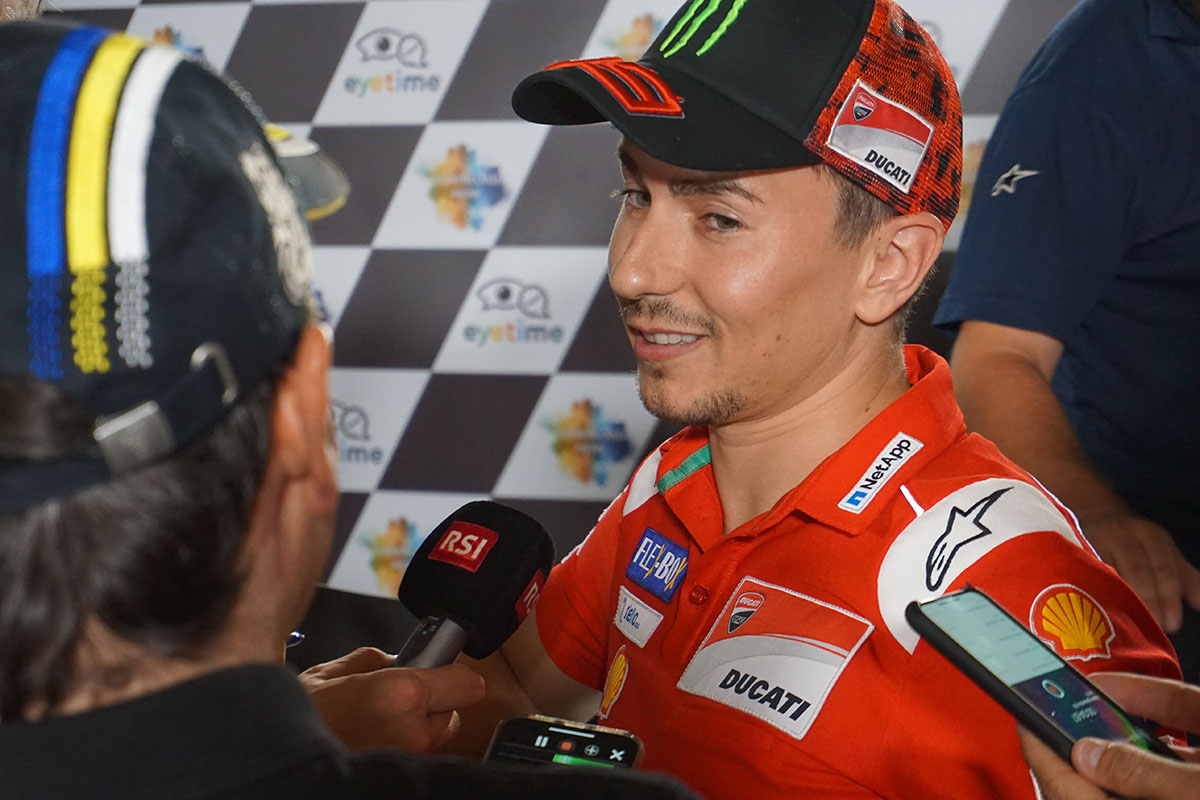 Since the press conference was held in English, the driver gave more interviews in their national language after the official end. The crowd was enormous at that time. Tomorrow it’s really starting then, in the morning, the first training sessions begin. I’ll be back live for you. Until then!