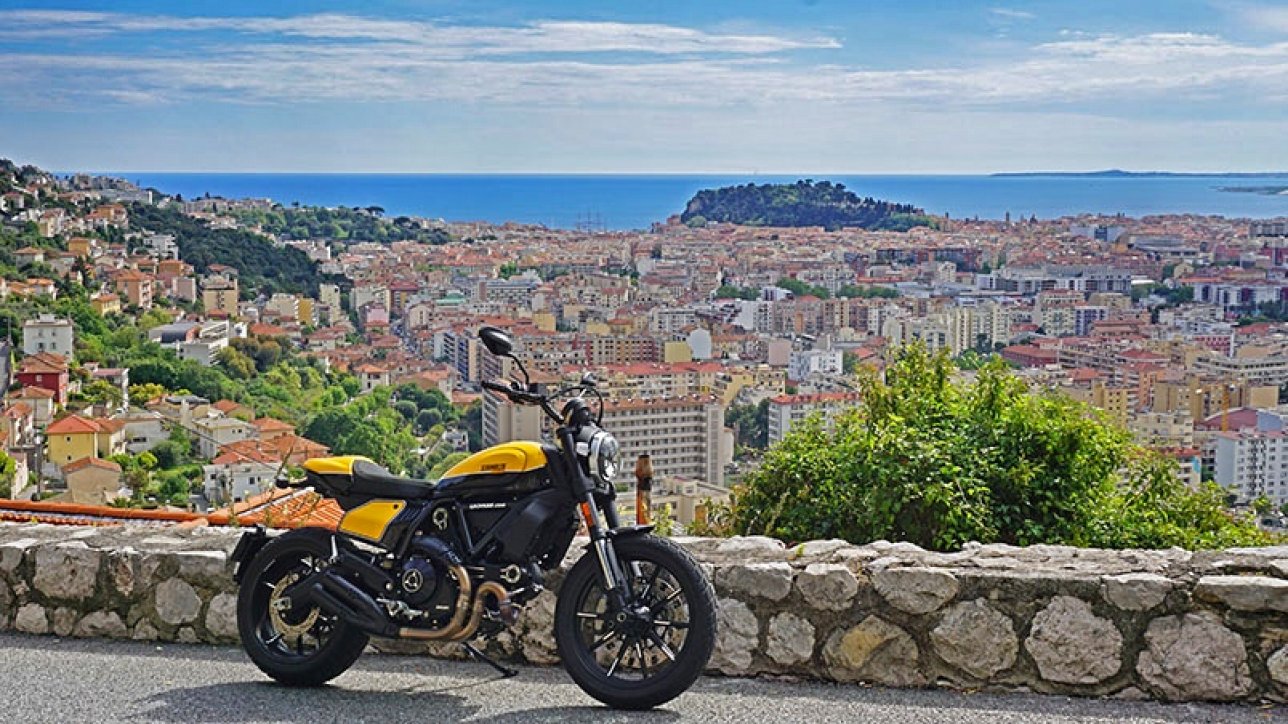 Nice | Southern France – The Grand Corniche between Nice and Menton high above the French Riviera coast is one of the most beautiful panoramic roads on earth. An ideal spot to cruise along with the new Ducati Scrambler Full Throttle and enjoy the wonderful view. Arrival at the Casino of Monte-Carlo was the crowning finale…

James Bond already used the magnificent scenery of the Grande Corniche for a chase with a Ferrari 355 in his Aston Martin DB5 in the Bond movie “GoldenEye”. This time I wasn’t in such a hurry. Arrived in Nice at noon, I immediately moved into my accommodation in the heart of this wonderful city at the Côte d’Azur. After that my very first stop led me directly to Laurent, the owner of the motorcycle dealer Groupe Laurent Lachkar, who is also the official Ducati distributor (Ducati Nice). As we had already agreed in advance, I had come to test motorcycles around Nice for two days. 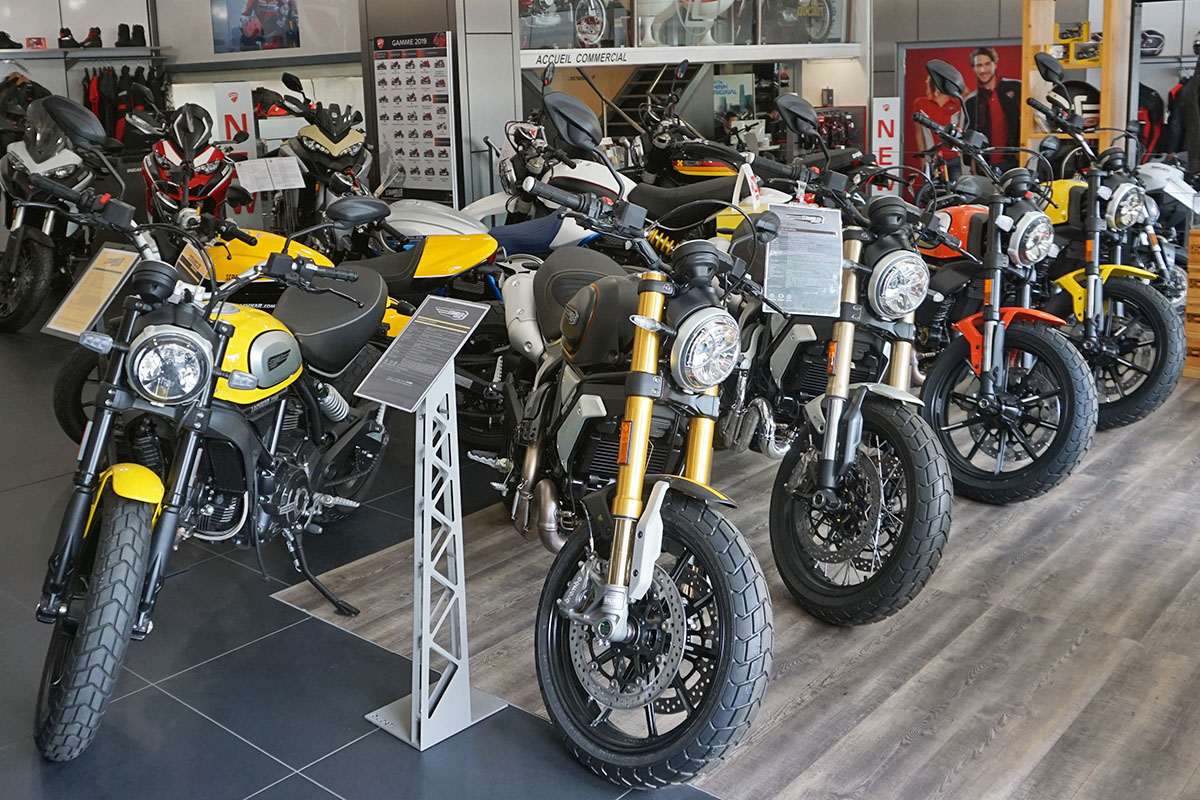 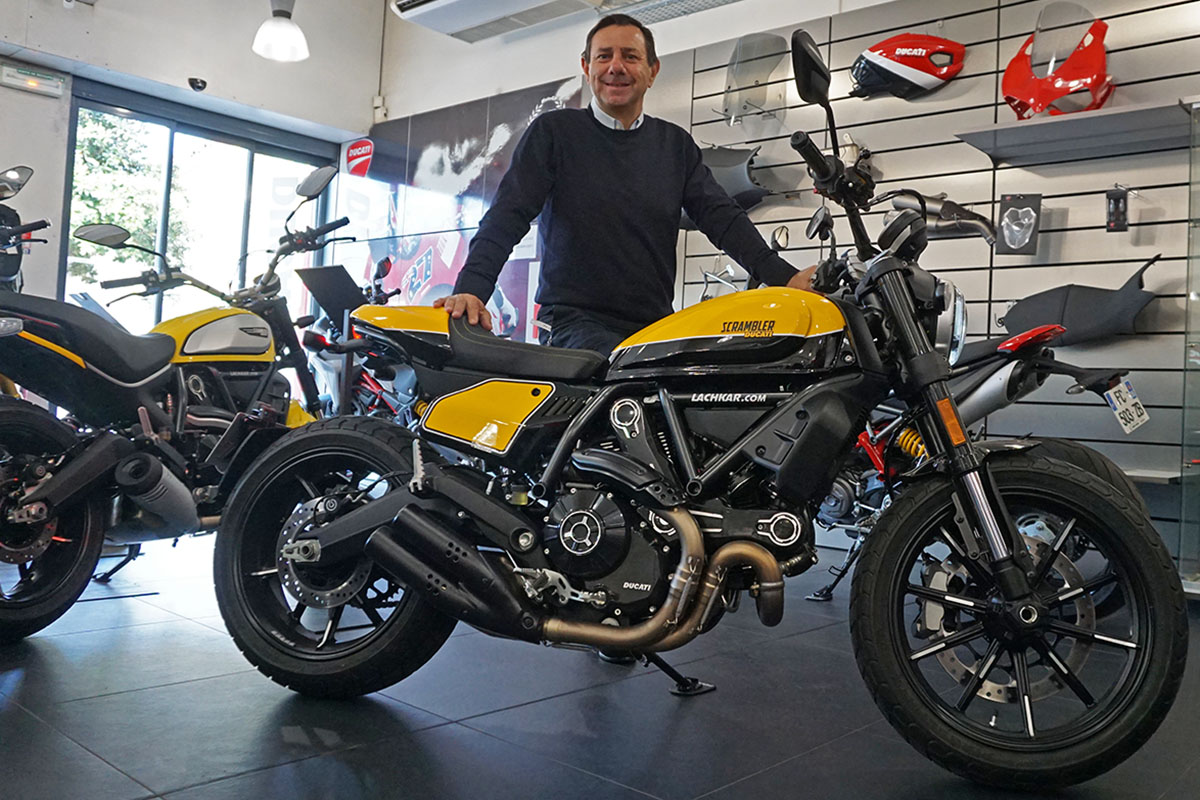 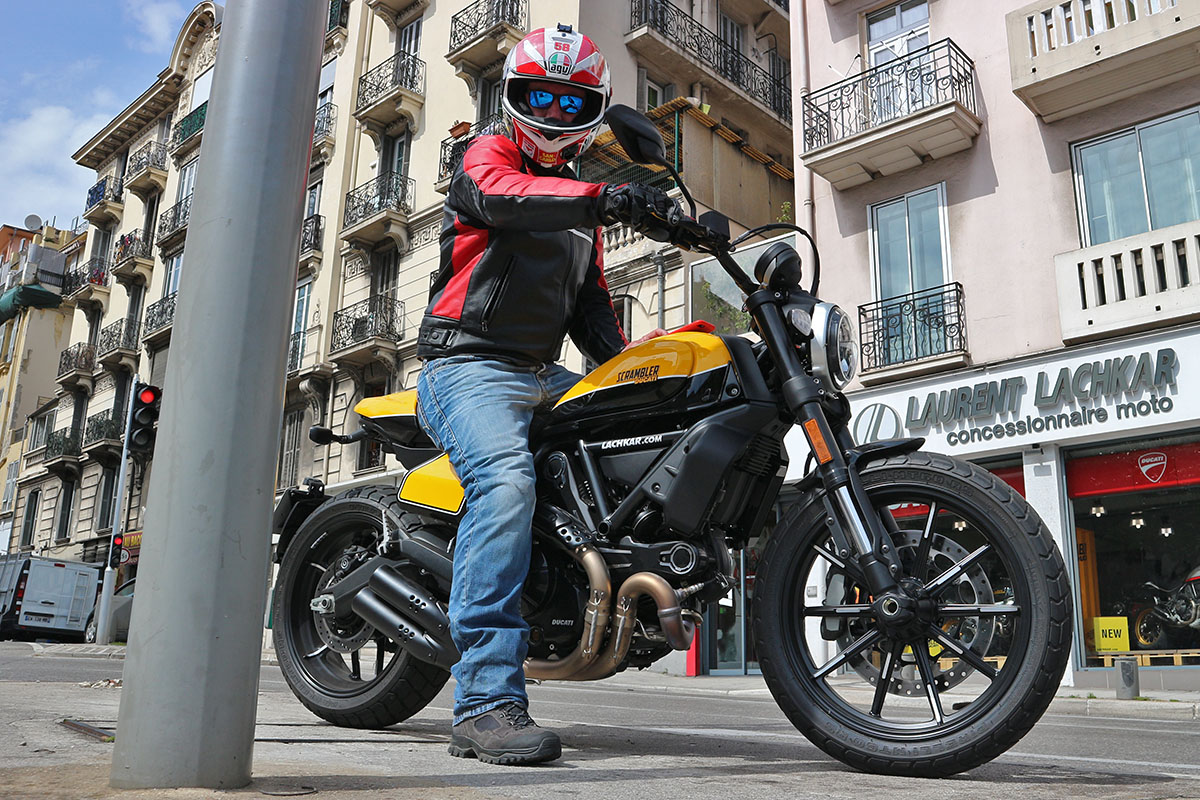 A DELIGHTFUL CRUISE ALONG THE GRANDE CORNICHE IN A SPORTY LOOK

On the first day it was the turn of the new Ducati Scrambler Full Throttle. The design of the new Scrambler model is inspired by the Flat Track racing scene, exactly the same bike ridden by Mexican rider Frankie Garcia in the 2018 American Super Hooligan Championship. For this test I had chosen the route from Nice to Monaco via Grande Corniche, the famous panoramic road. The road, officially called “D 2564”, built on behalf of Napoleon following in the footsteps of the Romans (“Via Julia Augusta”), starts inconspicuously at an intersection in the Riquier district.

I quickly gained height with the powerful air-cooled L-Twin two-cylinder engine of the Ducati Scrambler Full Throttle with 73 HP. After a short time I had an impressive view of the coastal metropolis of Nice. At the Boulevard de l´Observatoire around the Mont Gros I went in a big loop to gain more height in a forest. The silky soft 6-gear shift in combination with the gentle power development (67 Nm torque) provided additional pleasure.

The view through the trees then fell down to the noble coastal town of Saint-Jean-Cap-Ferrat, a beautiful peninsula in the Mediterranean between Nice and Monaco. After a short stay at this beautiful place, we continued in the direction of Col d´Eze. It was so much fun to move the Scrambler that I unfortunately missed a visit to the historical old town of the idyllic mountain village this time. But I will certainly make up for that soon. 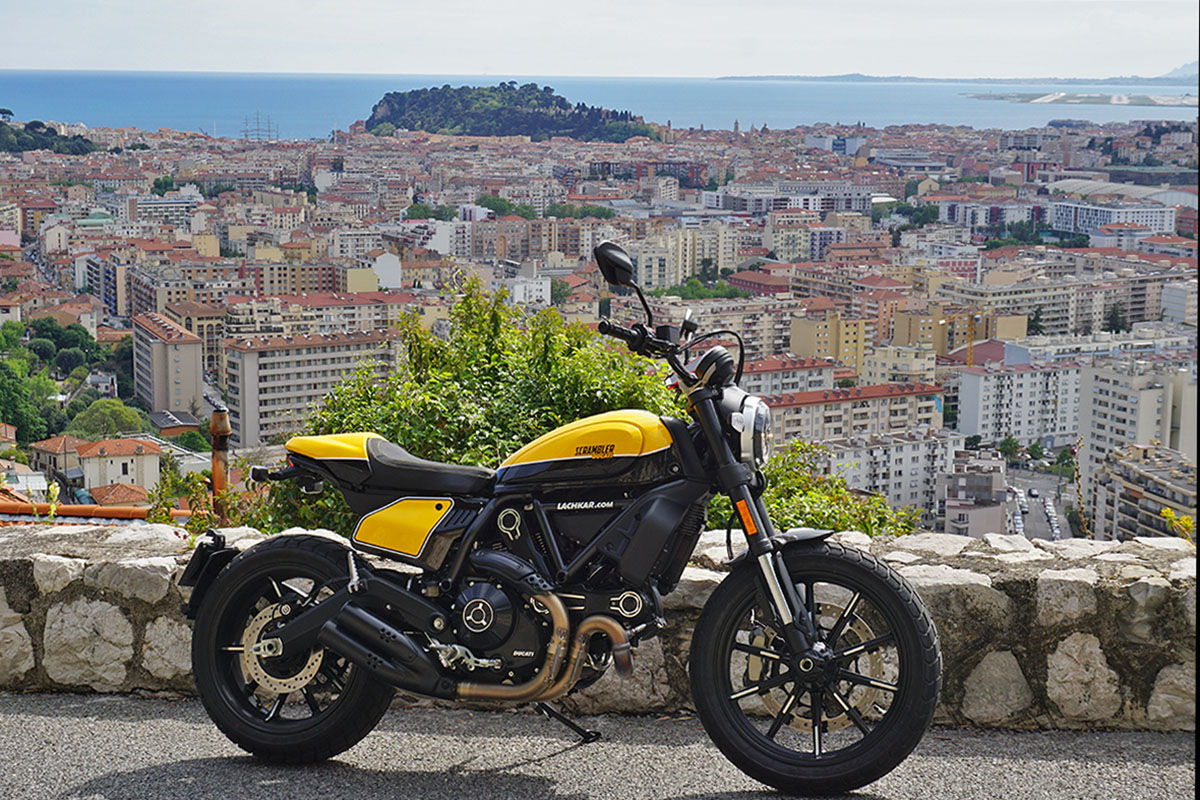 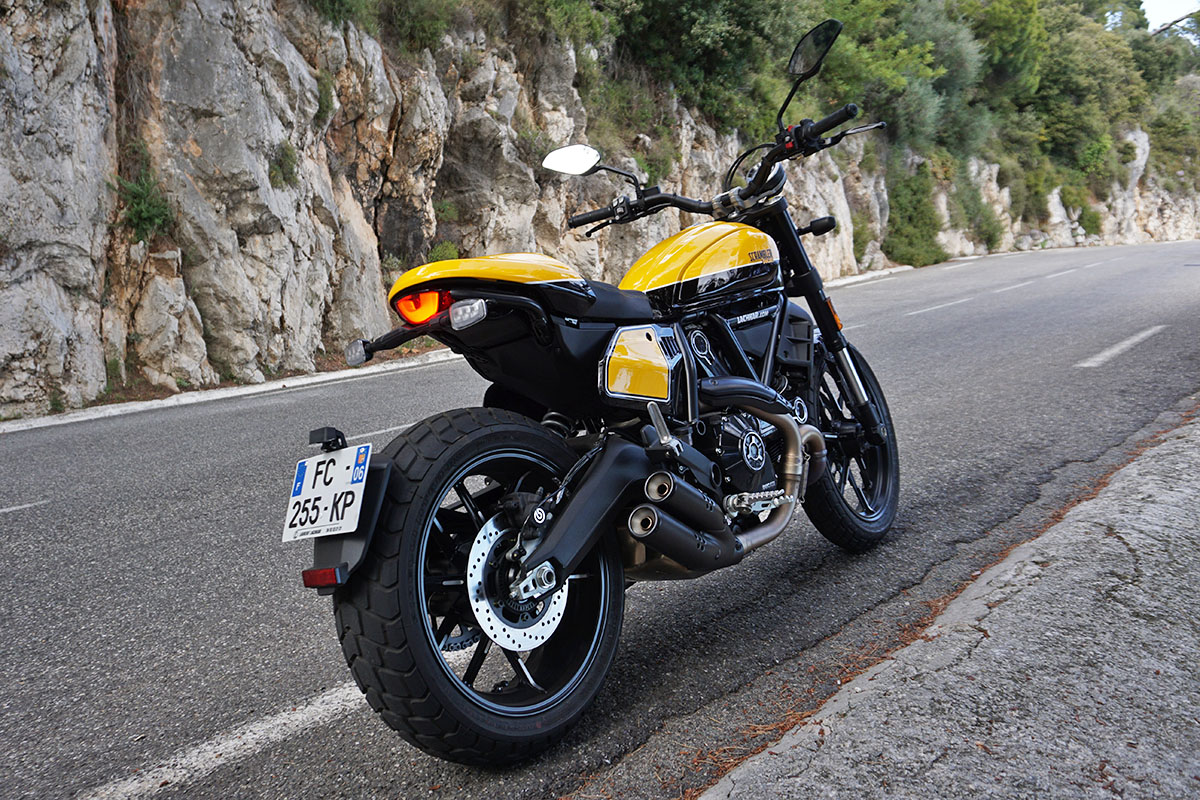 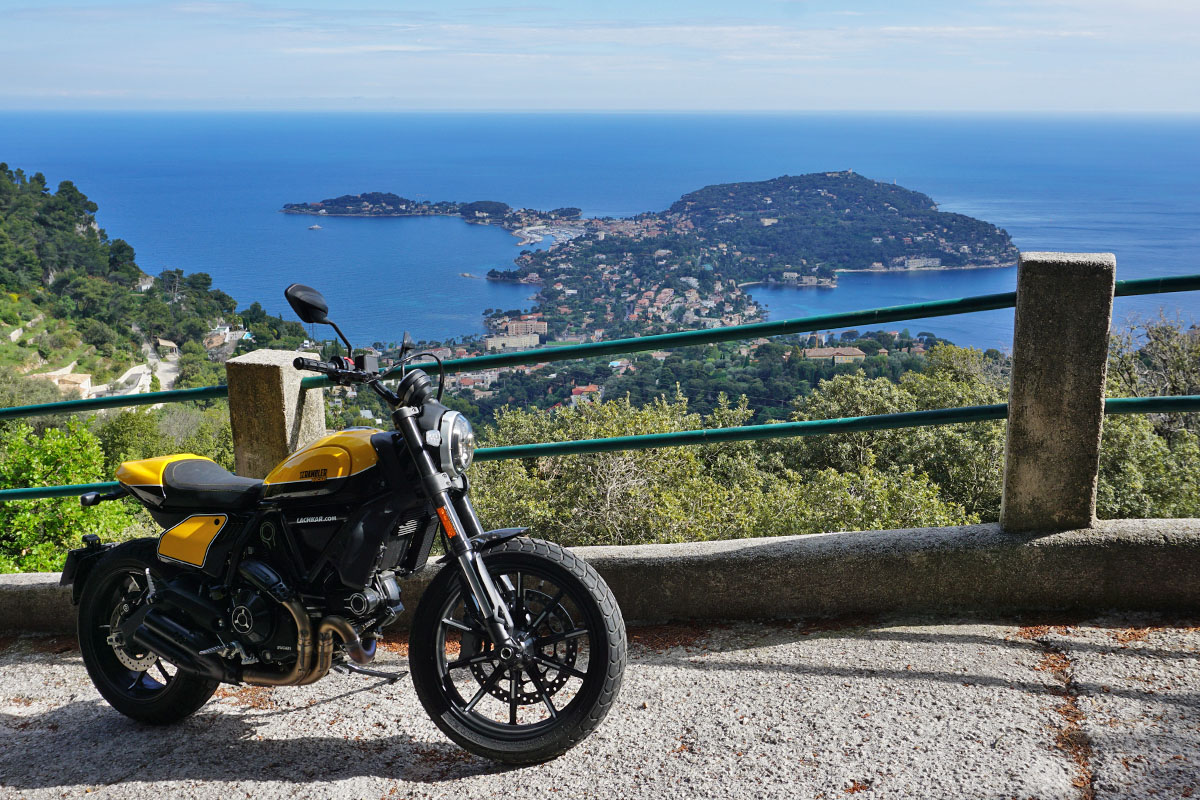 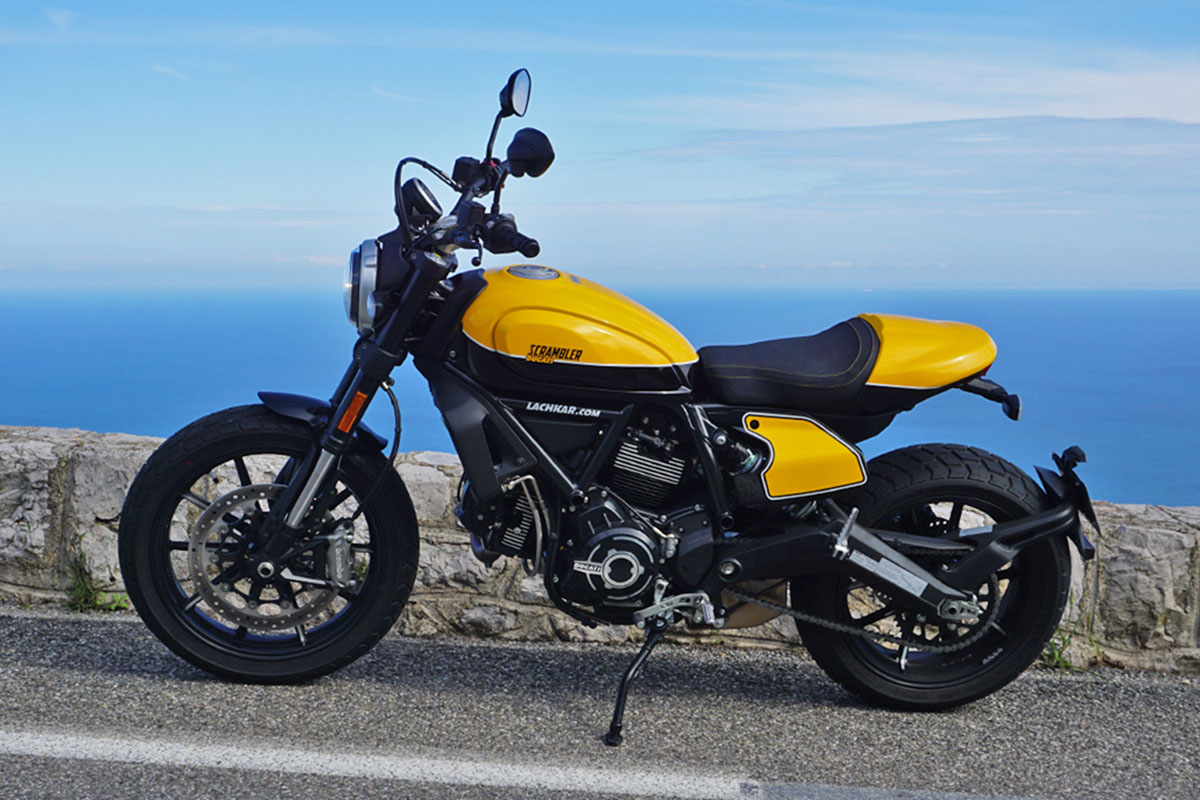 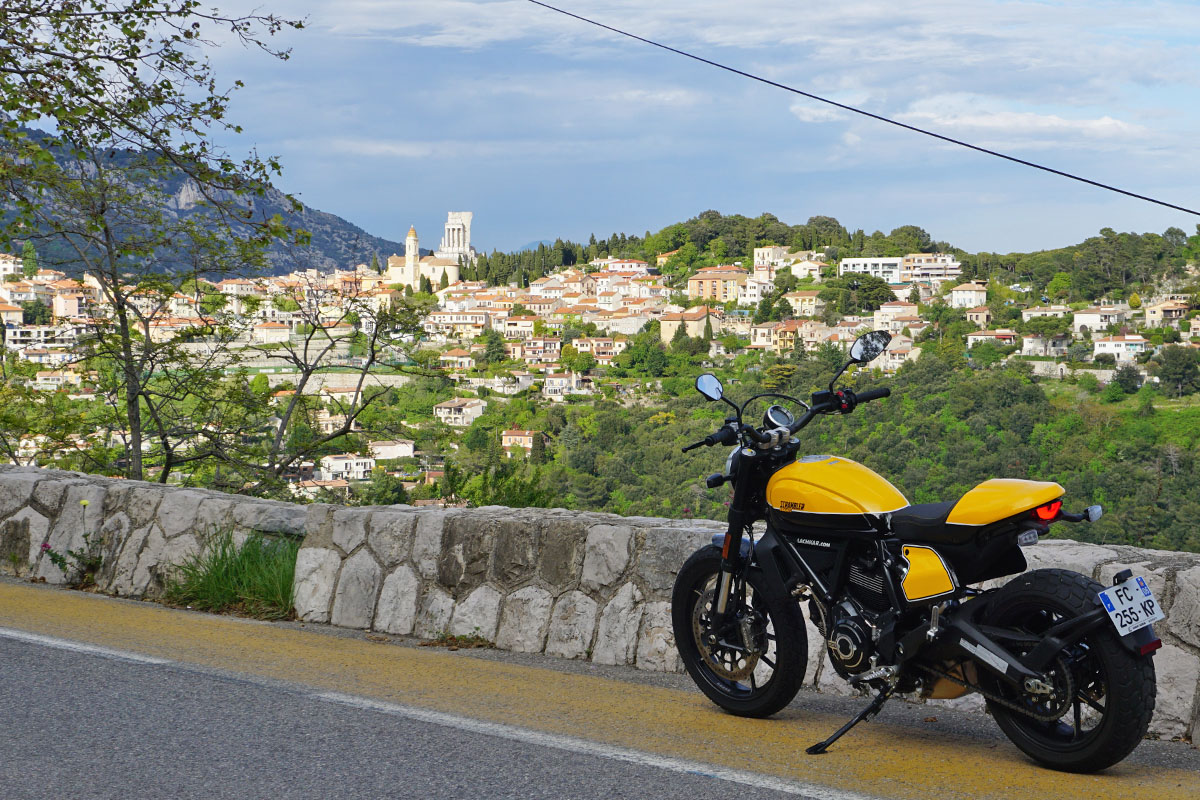 DESCENDING THE STEEP SERPENTINES INTO THE PRINCIPALITY OF MONACO

I had already reached 507 metres above sea level and the road continued to wind towards La Turbie. My 189 kg light Scrambler, which was ready to drive, was very handy and could be easily driven around the curves, but it did not seem unstable and was always on the road. The sound of Termignoni’s dual-tailpipe exhaust was robust but not obtrusive. The Brembo brakes with the Bosch cornering ABS left no doubt about the deceleration.

Traces of the earlier Roman rule can be seen along this boulevard. Already from a distance I could see the 50 meter triumphal column which was originally built in the years 7-6 B.C. in honour of the Roman emperor Augustus. Shortly after La Turbie I deviated from the Grande Corniche to the narrow Route of Beausoleil, which winds steeply down the narrow serpentines into the Principality of Monaco. The road gives a unique panorama view of the city-state and is decorated with artworks of graffiti. After crossing the Moyenne Corniche in Beausoleil, which is still French, I reached the border to Monaco.

From here I went directly to the Casino of Monte-Carlo. After a short stay for photos in agreement with the numerous available security guards, I drove further down to the sea. Before I reached the slowest curve of Formula 1 called “Grand Hotel Hairpin”, I found an official motorcycle parking place for my Scrambler right at the track. At a place where in a few weeks the Formula 1 racers will be rushing along. 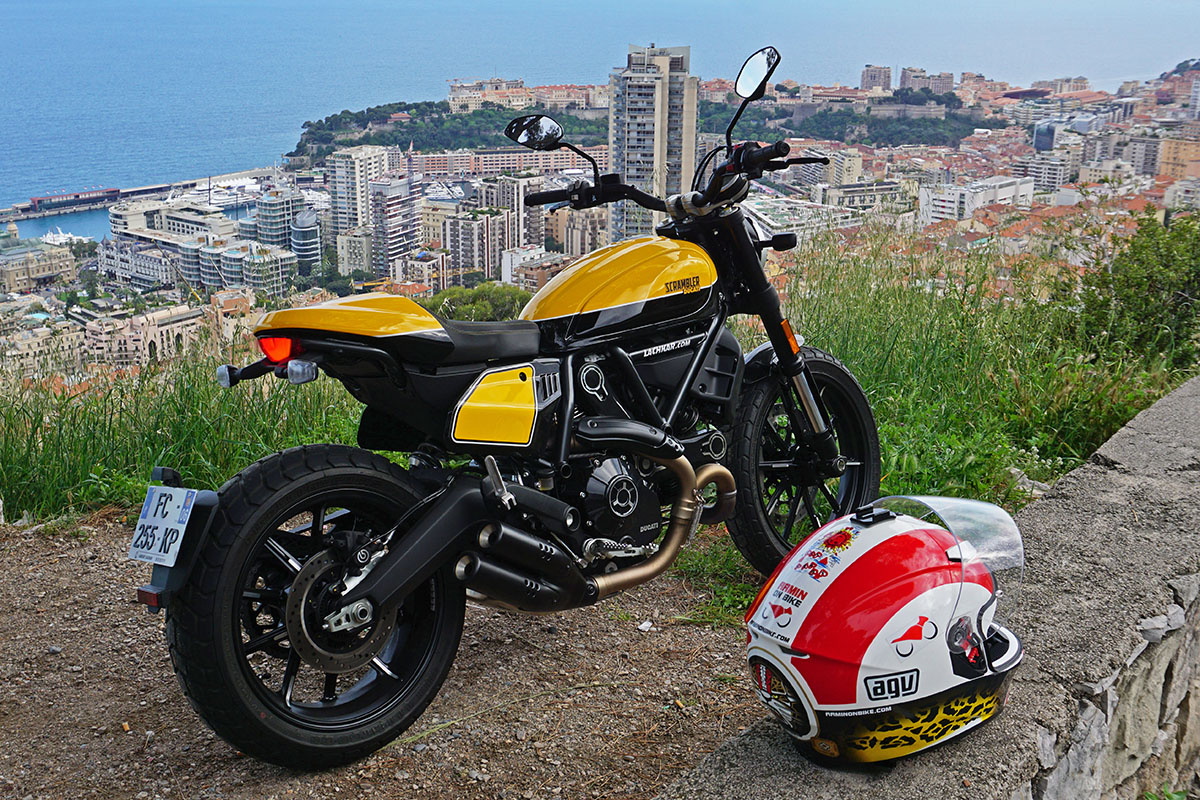 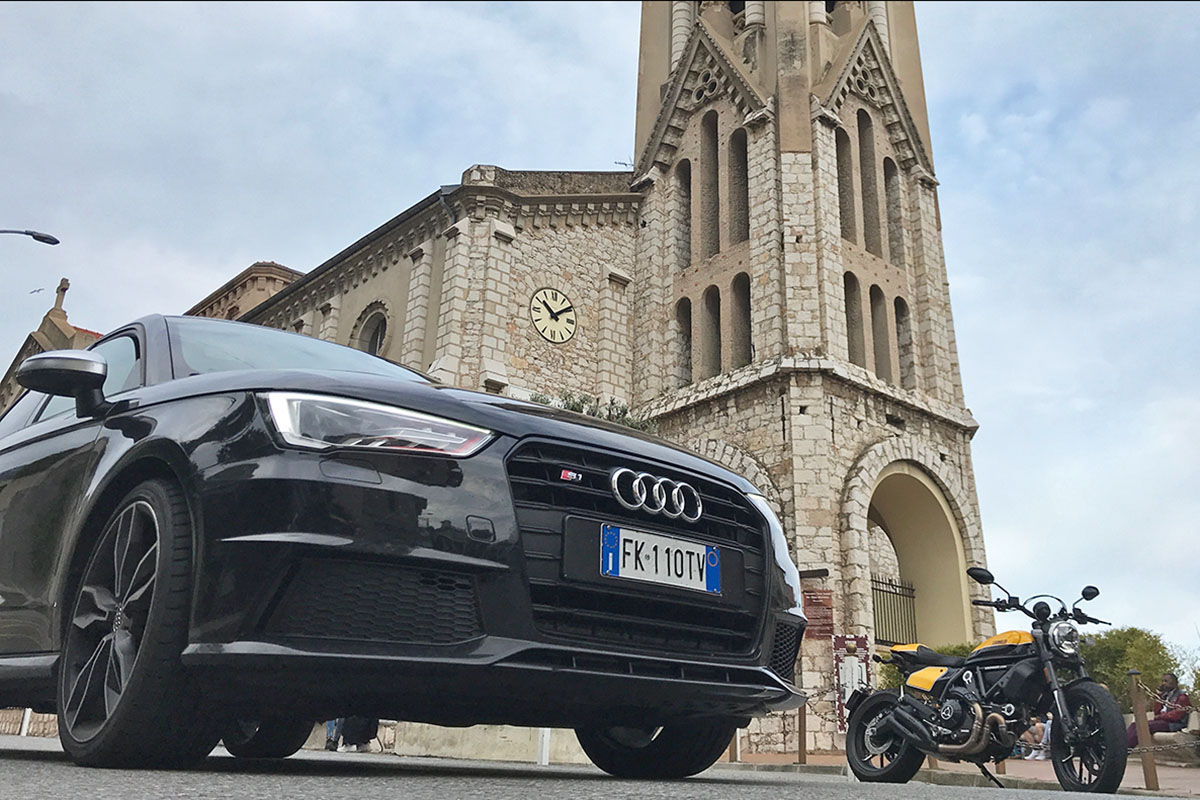 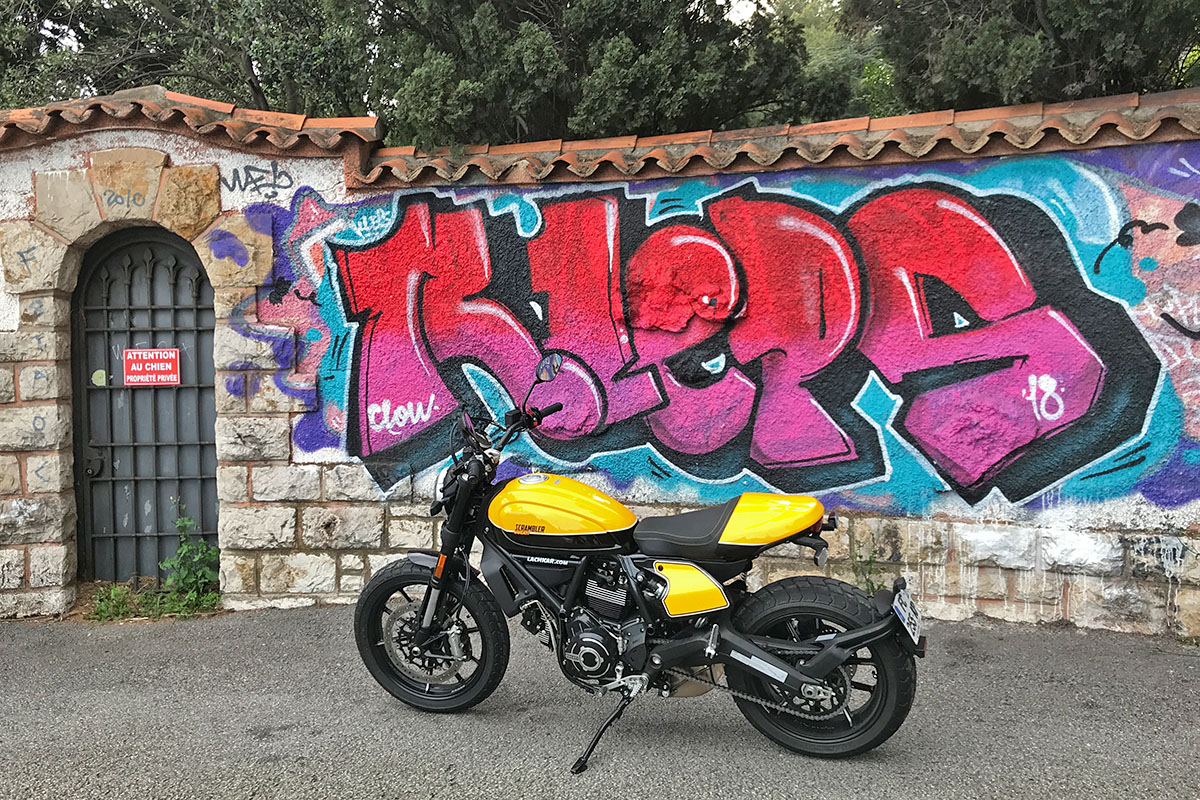 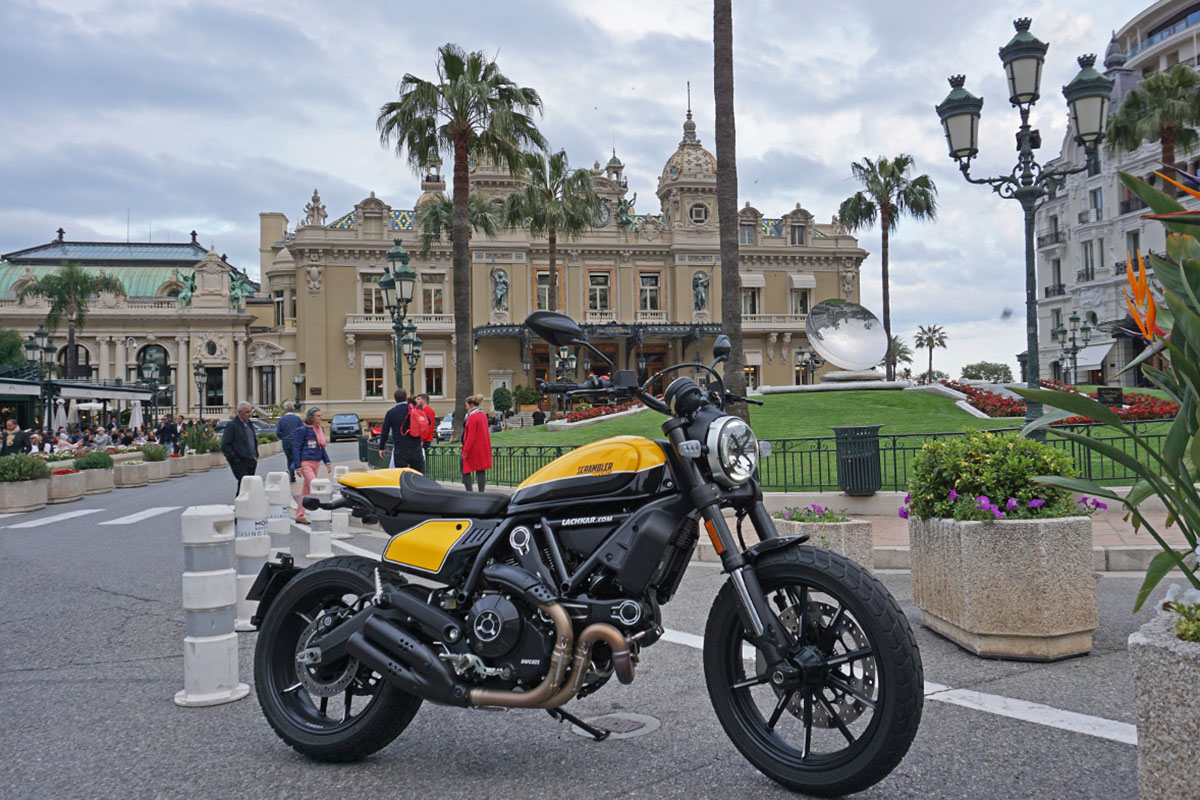 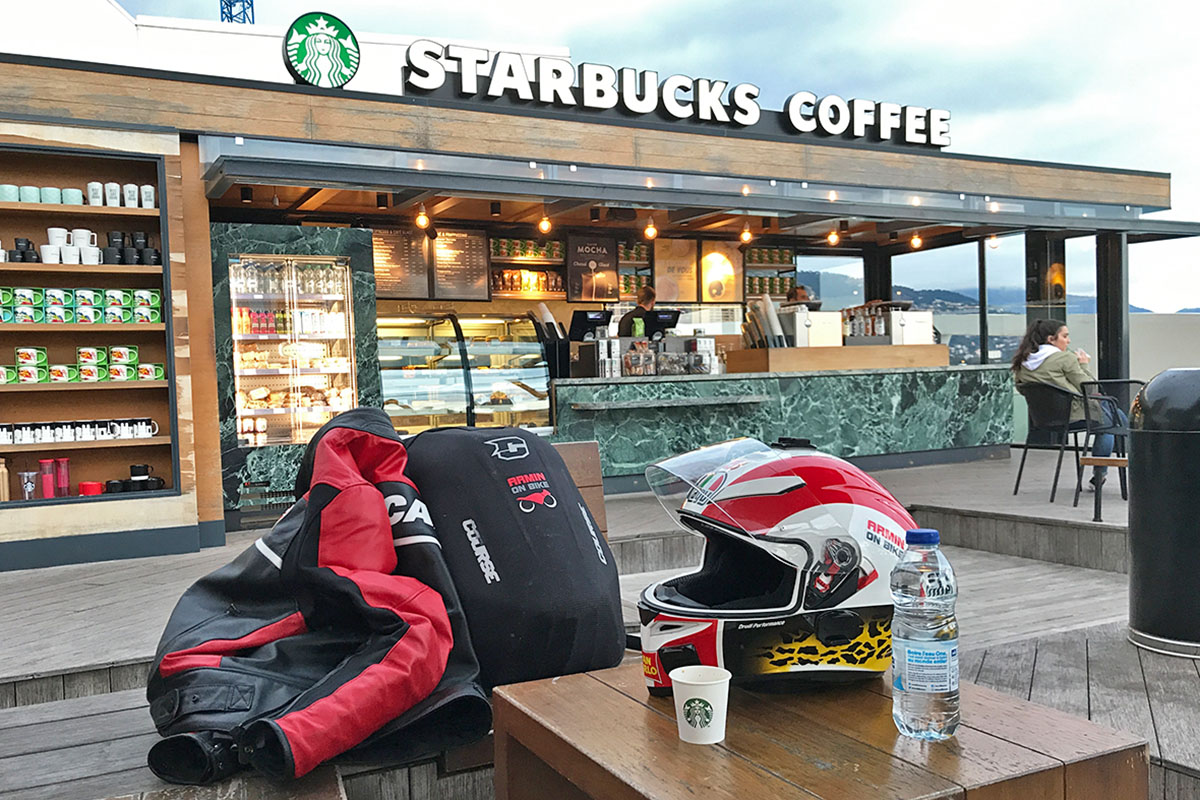 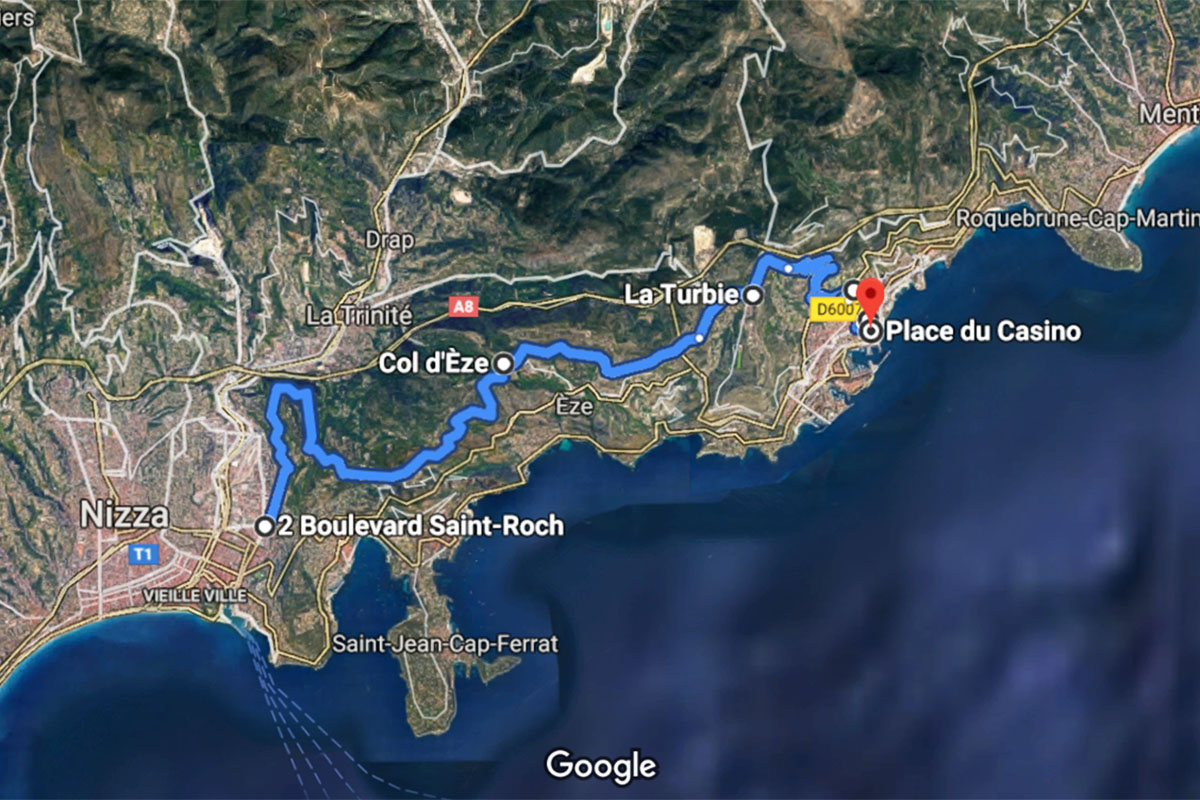 Finally, I enjoyed a well-deserved espresso on the terrace of the Starbucks Ni Box-Monaco with a view of the impressive construction site of the Portier Cove district, which is currently under construction due to land reclamation from the Mediterranean. I spent the rest of the evening in Monaco. Late but I went back to Nice, because another test was waiting for me the next day.