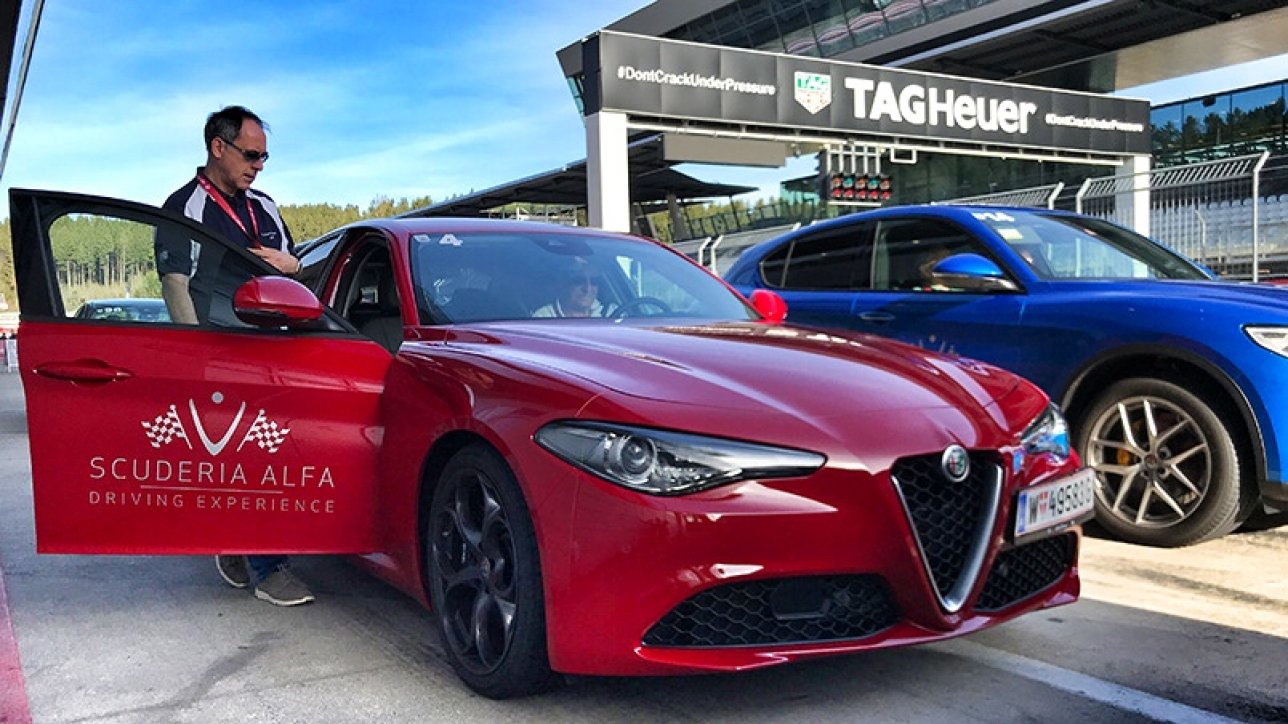 Spielberg | Red Bull Ring – Upon invitation by Alfa Romeo Austria and Motor Village Schönbrunn I followed my heart to test the Alfa Romeo Stelvio for the first time at the ‘Ring’. I couldn’t get this sportive SUV out of my head since I saw it the first time last July on the highway to Monaco…

It happened on one of my notorious ARMIN ON BIKE X-Trips last summer, when I drove with my Ducati Monster in a low-flight from Ospedaletti at the Italian Riviera to friends in a small mountain village located in the French Maritime Alps. With the red Alfa Romeo Stelvio it was love at first sight. At first I couldn’t even categorize it since I’ve never seen it before. Since this day I approached the car step-by-step by photographing it in various opportunities and sharing it on my social media channels with my friends and followers. 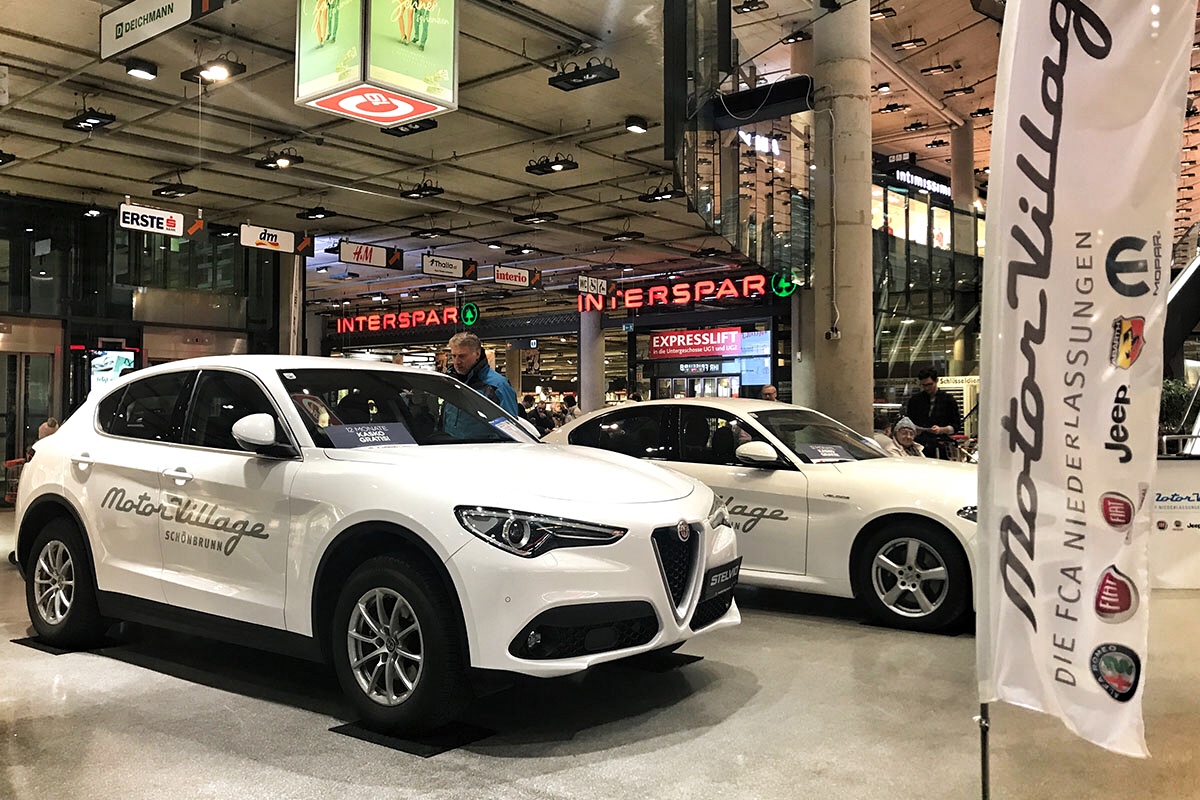 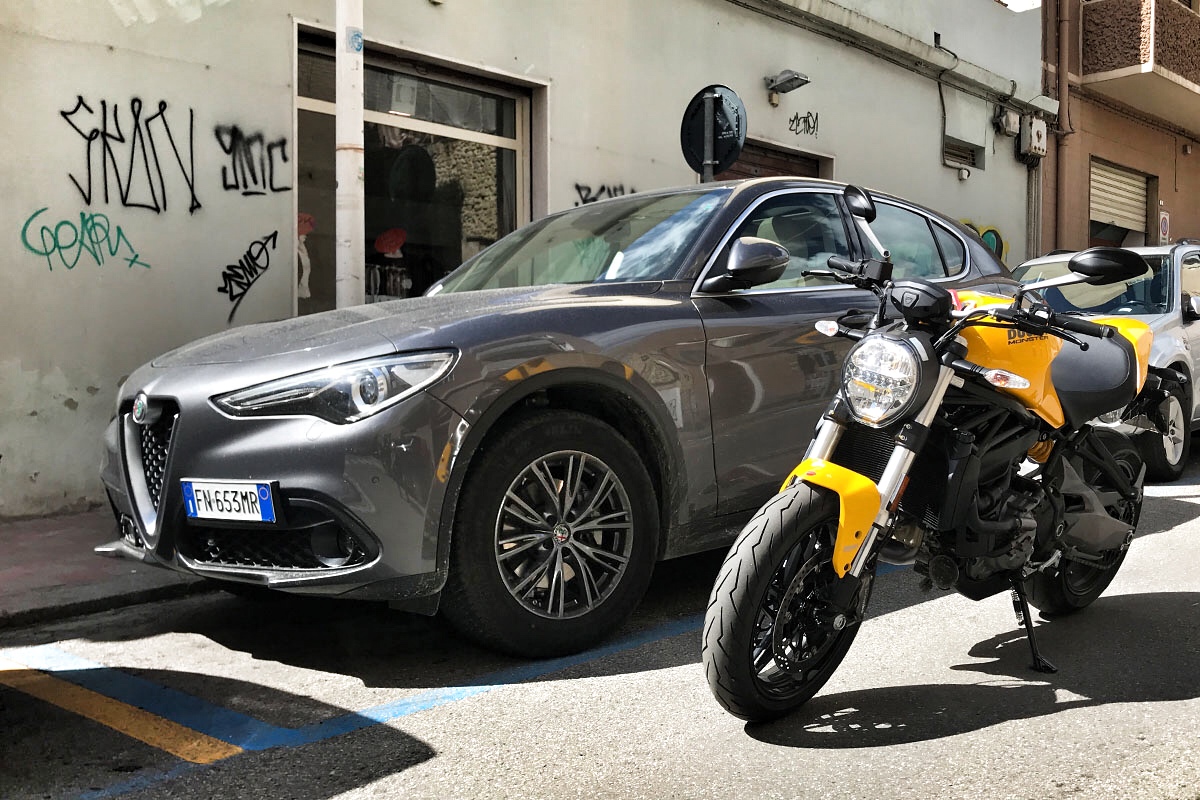 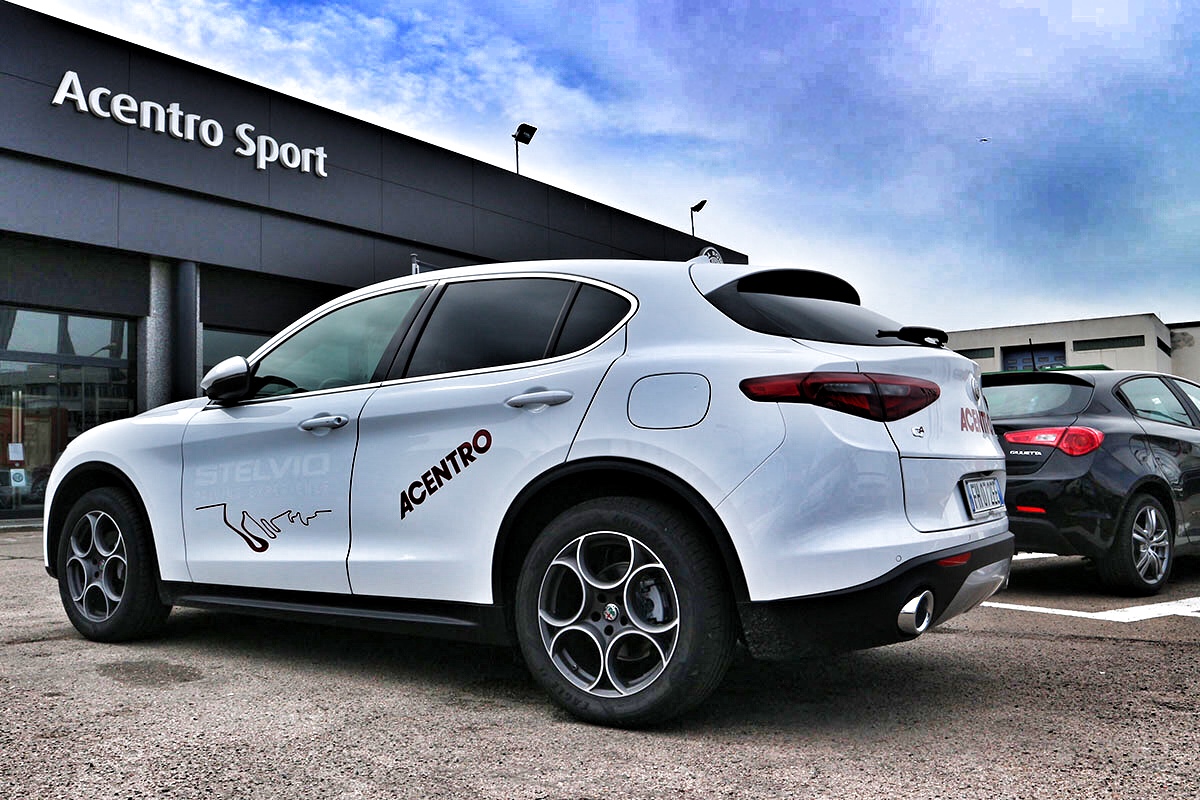 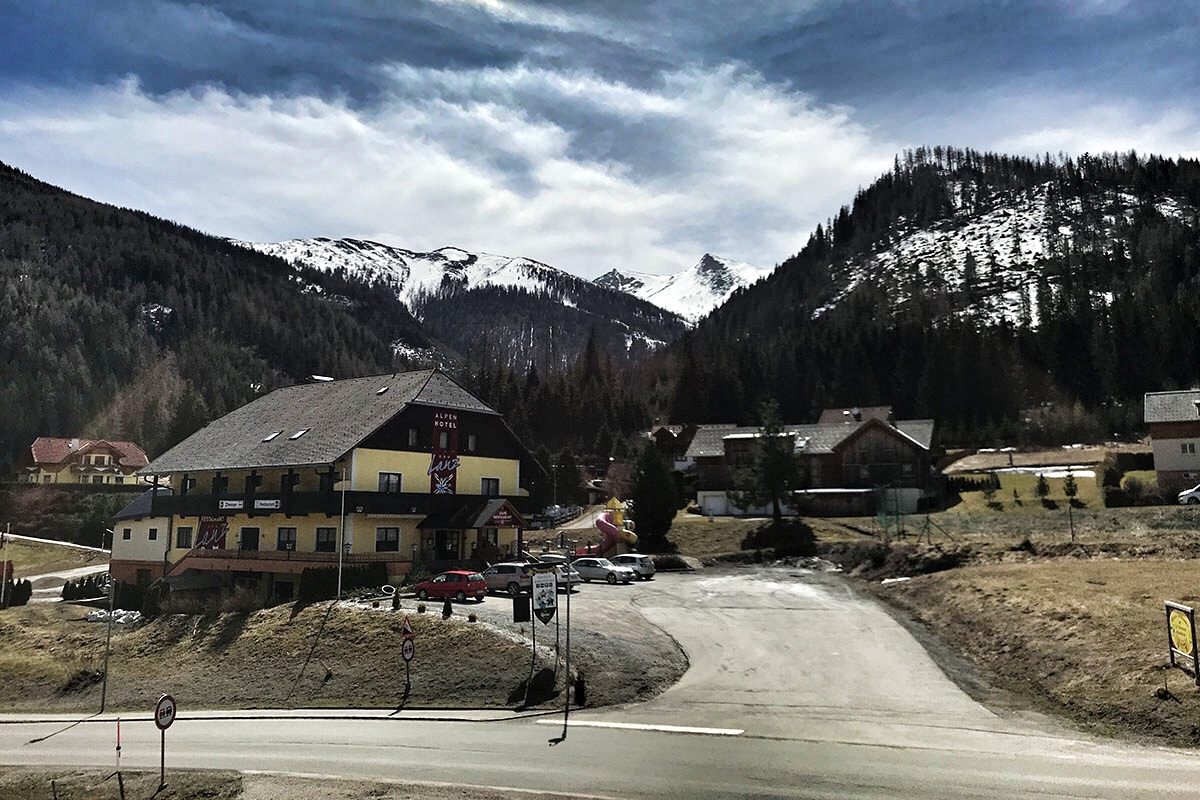 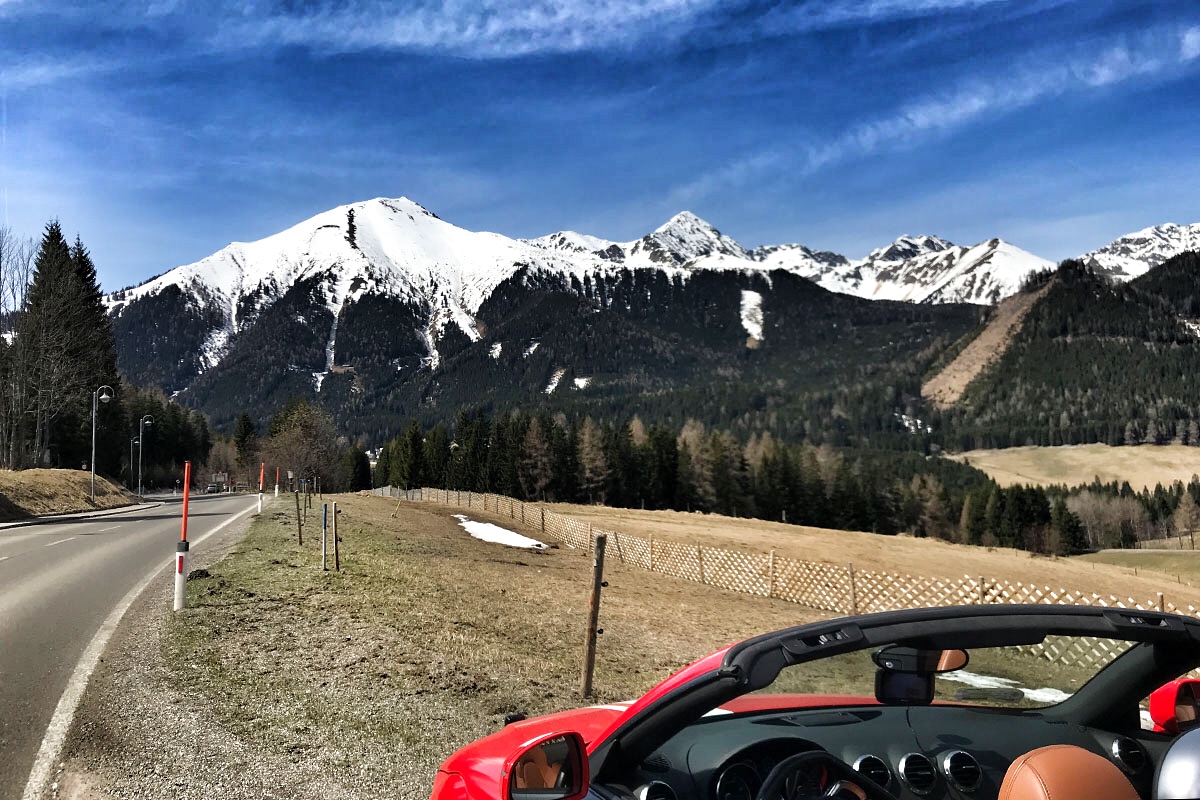 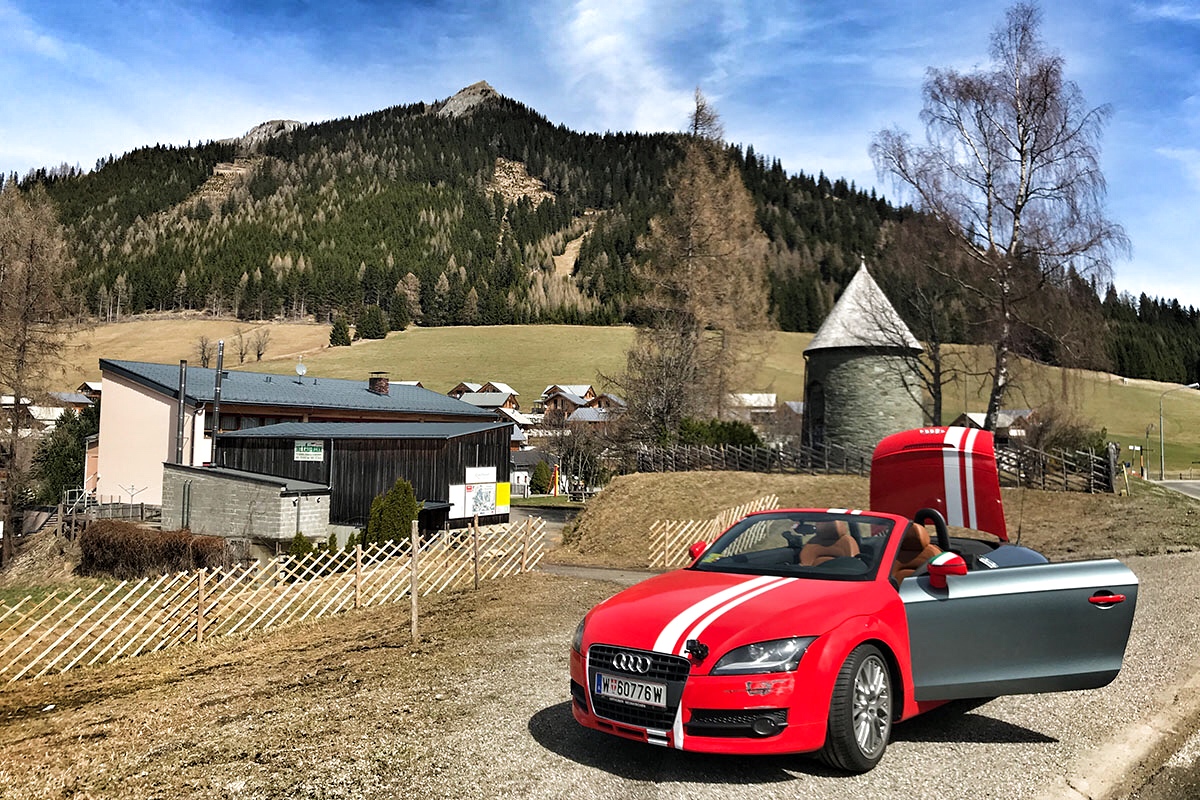 This culminated so far, that just before my trip to Sardinia in March, an e-mail by Fiat Chrysler Automobiles approached me, inviting me to the SCUERDIA ALFA Driving Experience at the Red Bull Ring. The joy was huge, finally having the opportunity to test the Alfa Romeo Stelvio, which took me by assault. Coming from Linz I drove this Saturday over Hohentauern at the Triebener Tauern-Pass to Spielberg and the Red Bull Ring. Already the arrival at this day was a pleasure. The wonderful weather and the magnificent landscape was inviting for a sportive easy open driving. Incoming at the Red Bull Ring I was welcomed warmly by the Alfa Romeo Austria and Motor Village Schönbrunn staff, informing me about the procedure of the event. After a quick espresso at the bar, it was already my turn for the drivers briefing.

First of all they explained us the technical details and highlights of the Alfa Romeo models, we would test, to be informed precisely about the to be expected vehicles for this day. The variety of used aluminum parts and a motor shaft made of carbon fibers contribute to lightweight construction. The balanced axle load distribution of 50:50 on front and rear axle supports the additional driving dynamics of the two tested models Giulia and Stelvio. Three different driving modes, influenced by the most important and optimally on the driving situation aligned driving parameters, and an all-wheel drive, which adapts the power distribution based on the driving situation, are just one of the few technical highlights. They contribute beside the performance also   enormously to the driving safety. 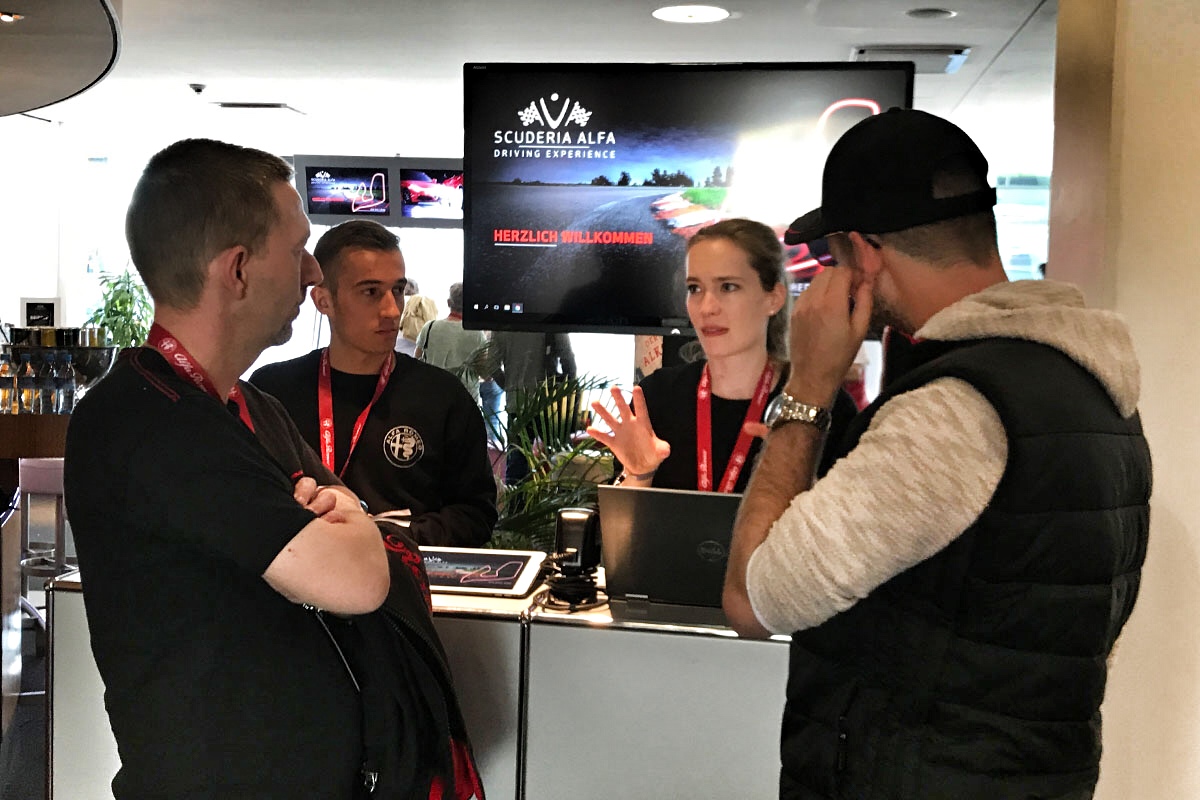 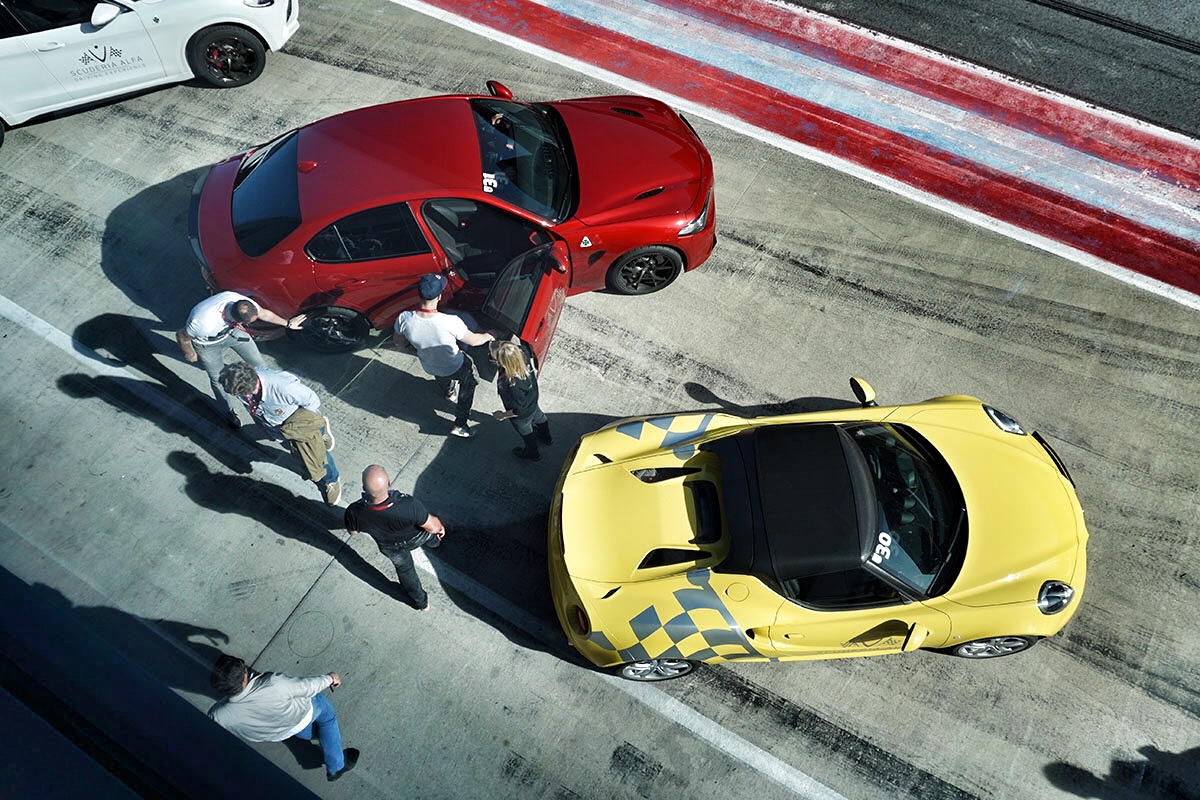 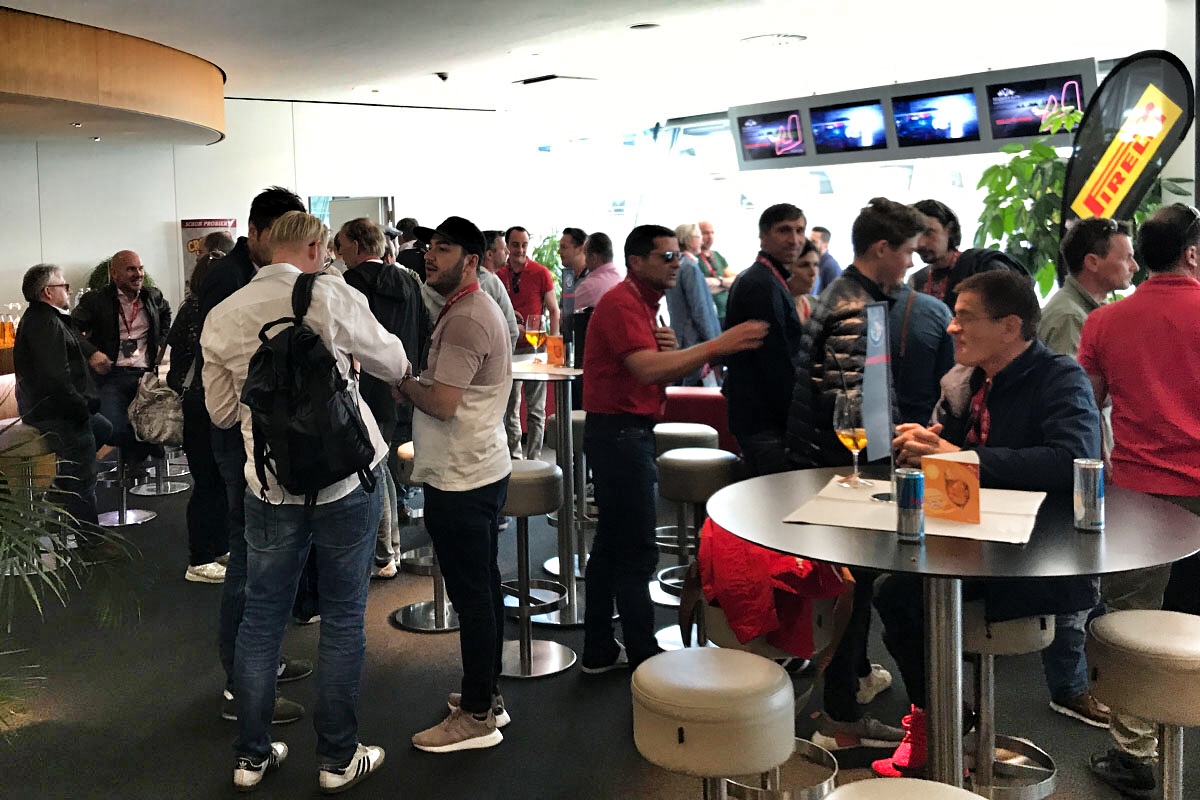 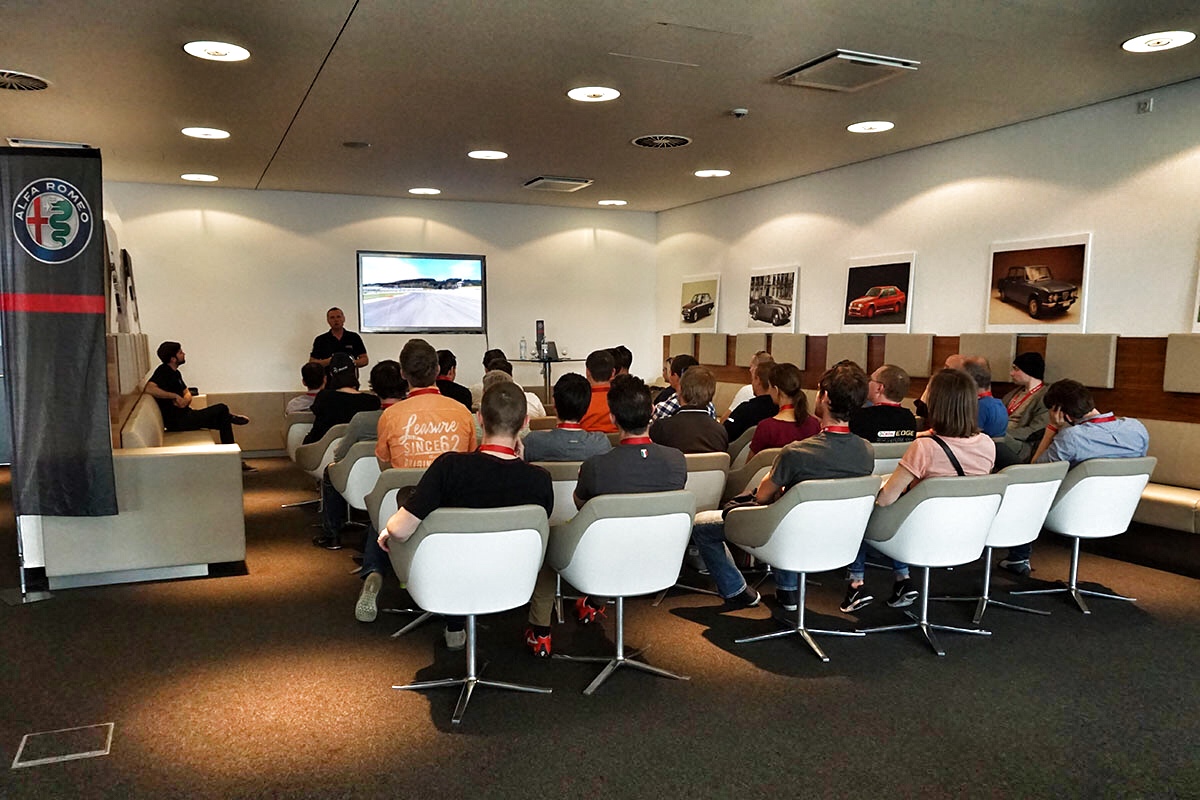 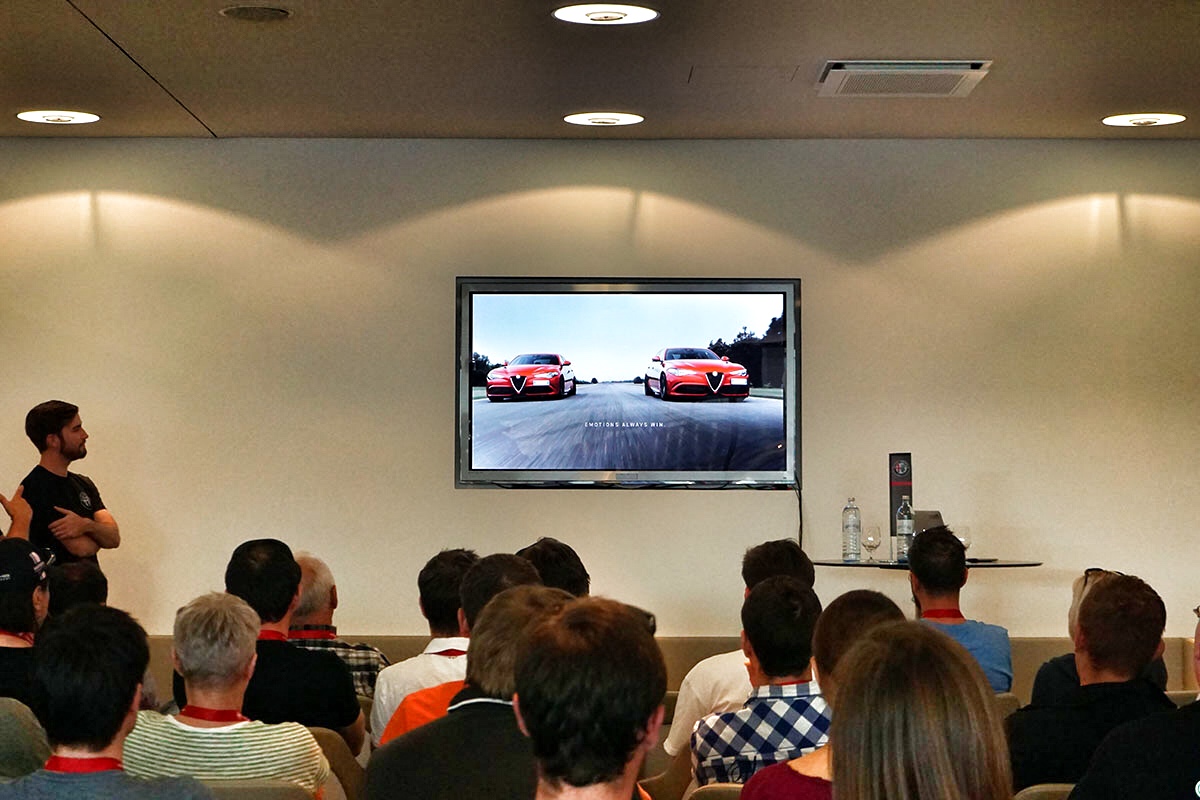 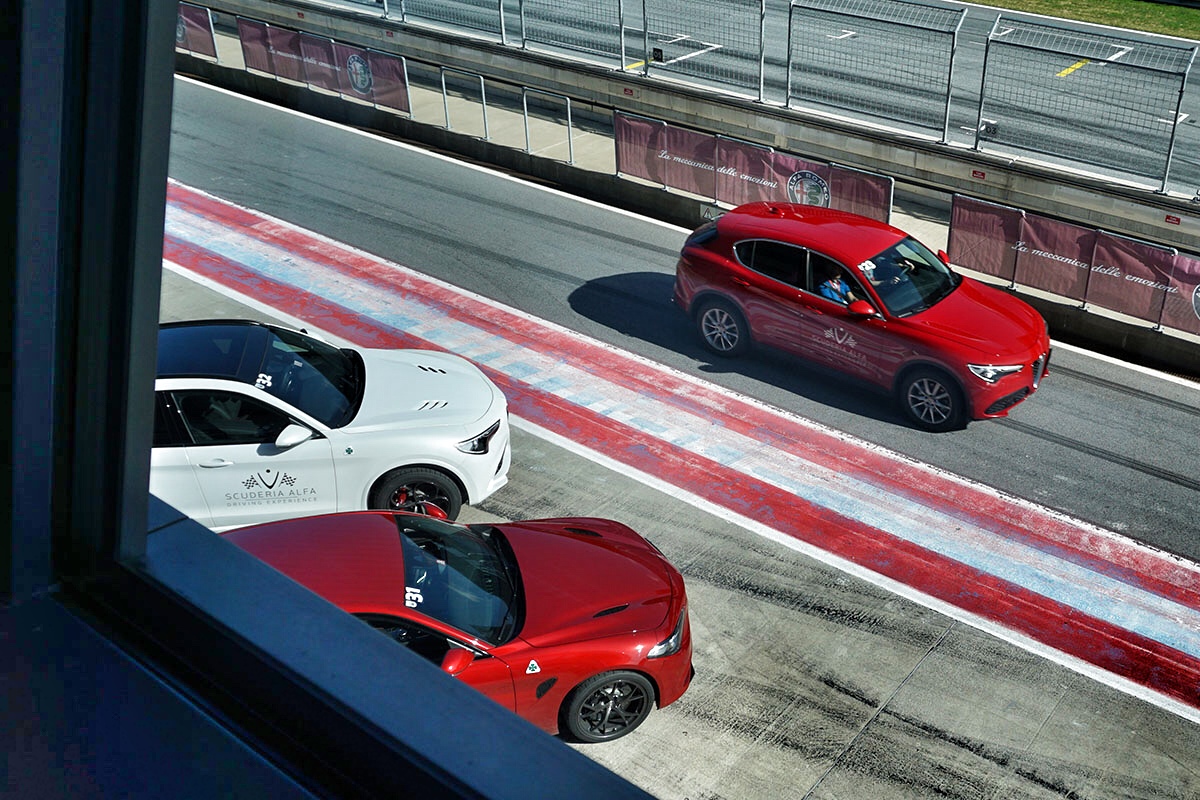 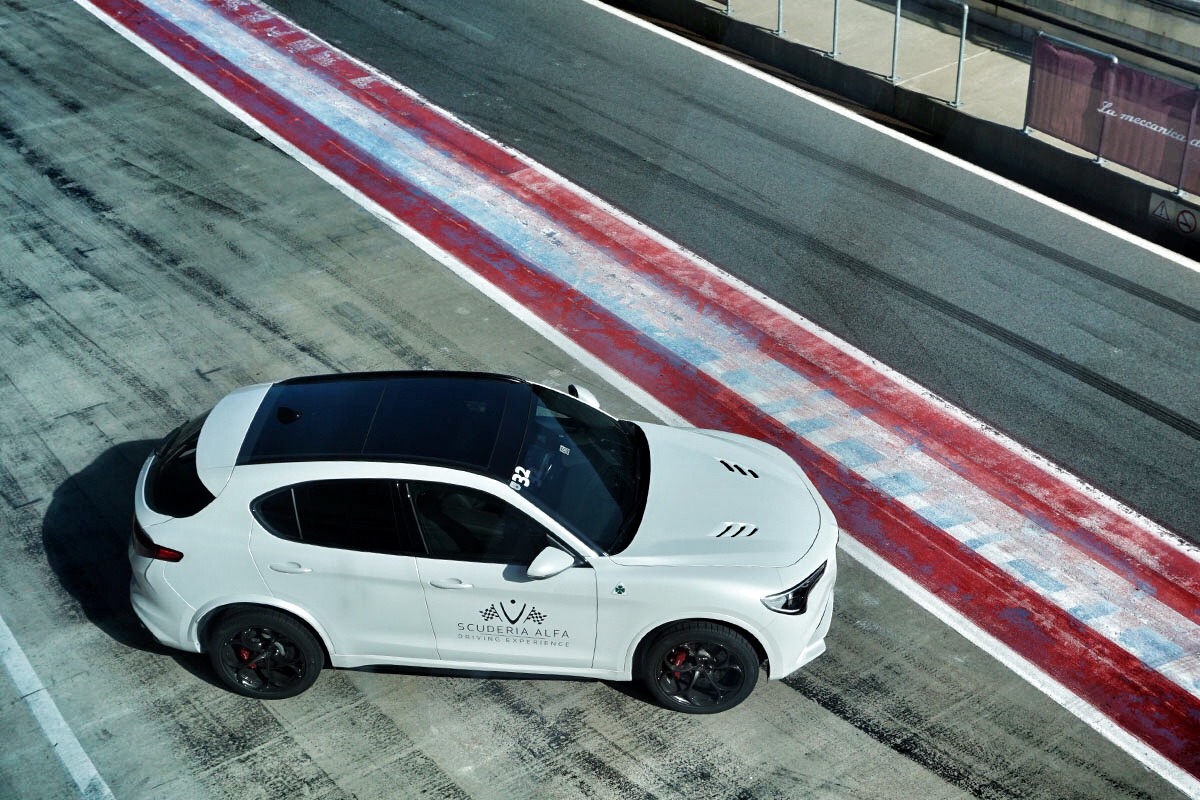 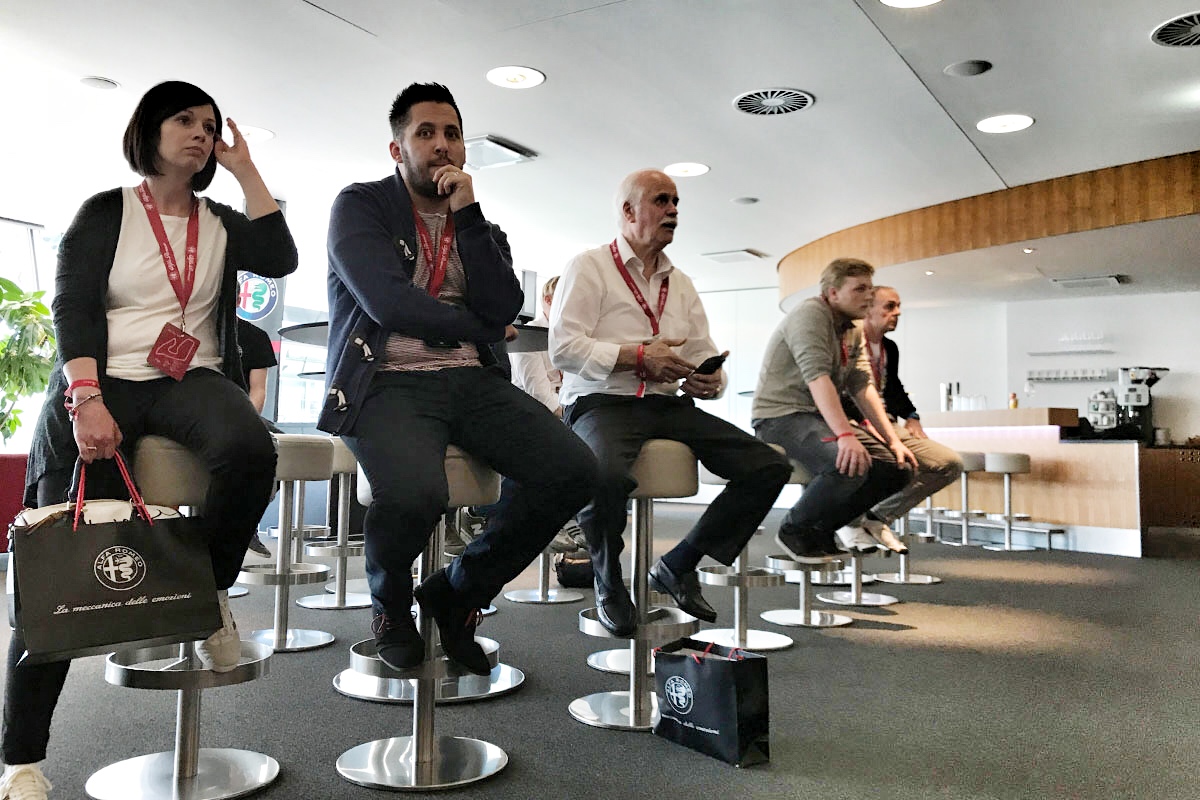 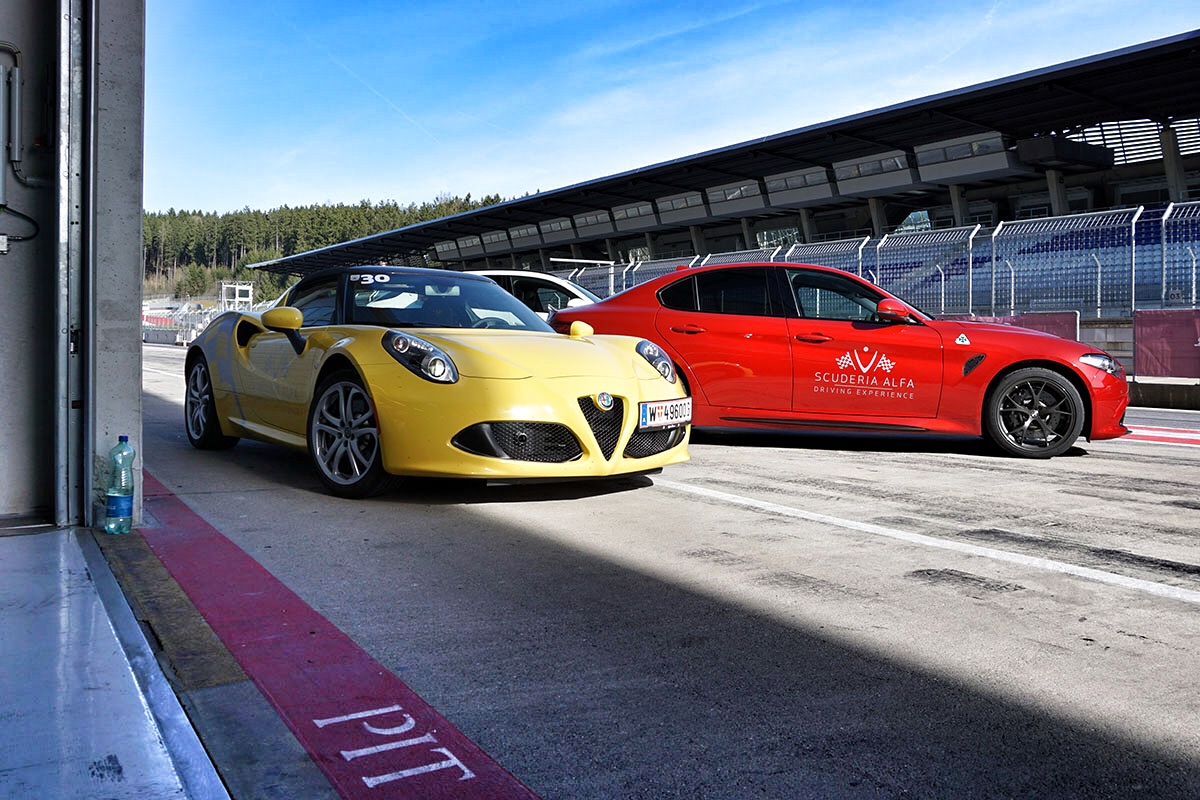 In connection with this, the instructor Alfred Schachner explained us the “Project Spielberg”, operator of the Red Bull Ring, details to the racing track and the procedure of the test. Regarding the characteristics, one have to mention especially the topography. On a track length of 4.3 kilometers the height difference measures 65 meters and the maximum slope states 12 %. Also the possibility of having different weather conditions at the same time, underlines the uniqueness of this race track. But thanks god this didn’t concern us, as we had bright sunshine and comfortable temperatures of slightly over 20 degrees Celsius on the April day.

Every 40 minutes there were about 30 new Alfisti to drive, which were divided into three groups “Giulia”, “Stelvio” and “Mixed”. I had opted for the group “Mixed” in order to be able to test both Giulia and Stelvio and to compare the two vehicle categories. We were always two in a car. A session consisted of four runs, with the first time being changed to the driver’s box and then the vehicle and then once again the driver. So everyone had the opportunity to turn two laps in both vehicles. On my last turn, only one lap could be driven due to time constraints.

After my first kick-off shortly after noon, which served more the warm up and technical preparations, I had the opportunity in the afternoon with Hannes Herr, an experienced kart driver, to take a seat in the car. We immediately understood each other well and started with an Alfa Romeo Giulia Super 2.0 ATX RWD with 200 PS in the colour ‘Grigio Vesuvio´, equipped with black leather and the classic 19″ Alfa-5 hole alloy rims.

At the beginning we were fortunate to be the first car directly behind the instructor and thus the possibility of almost undisturbed progress. As can be seen in the first video above, Hannes was able to steer the car very racy over the Red Bull Ring. We both were very surprised that it was “only” about the 200 PS version with rear wheel drive, as the car had a phenomenal road handling and also a perfectly adequate motorization for a sporting pace. 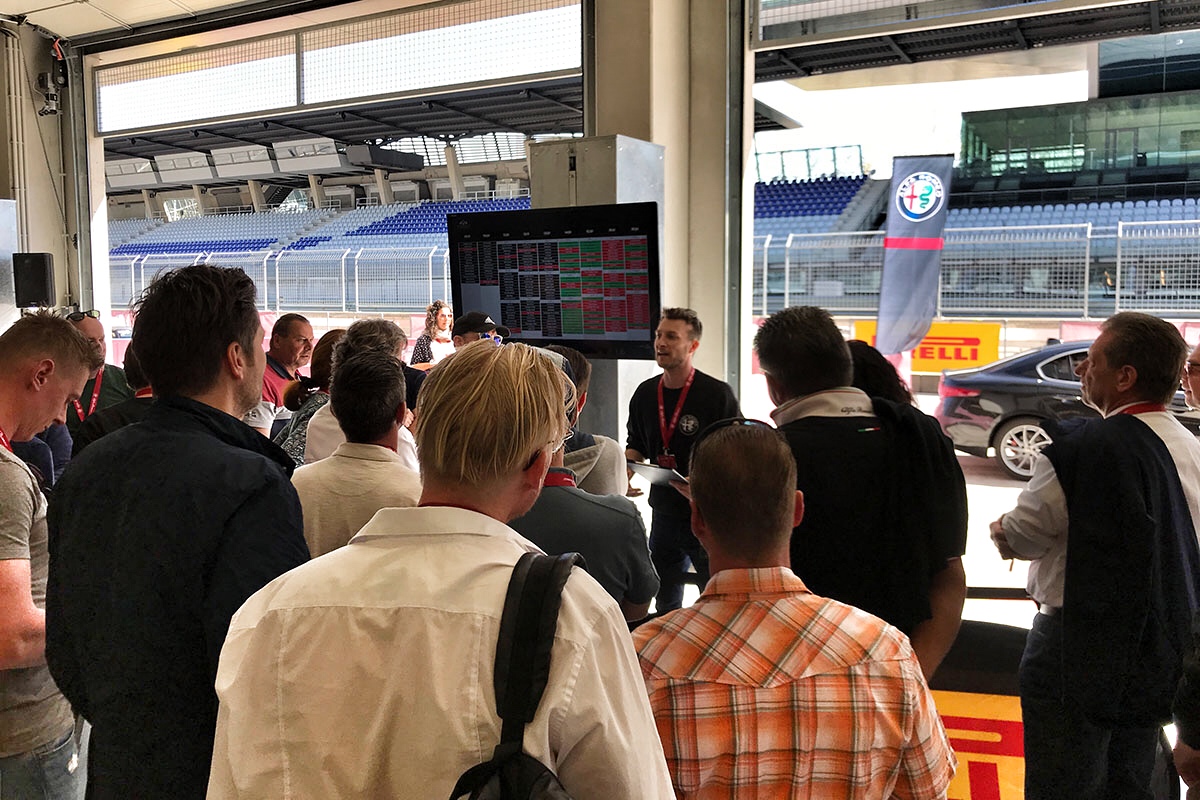 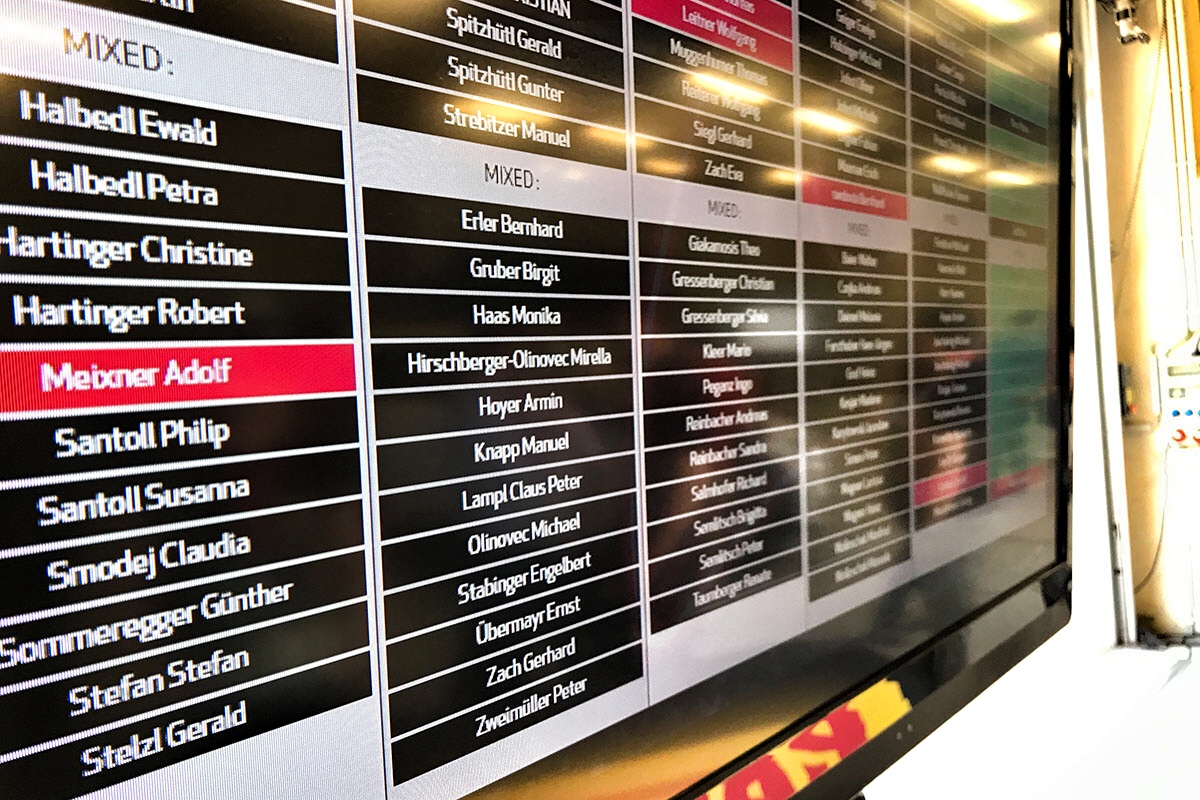 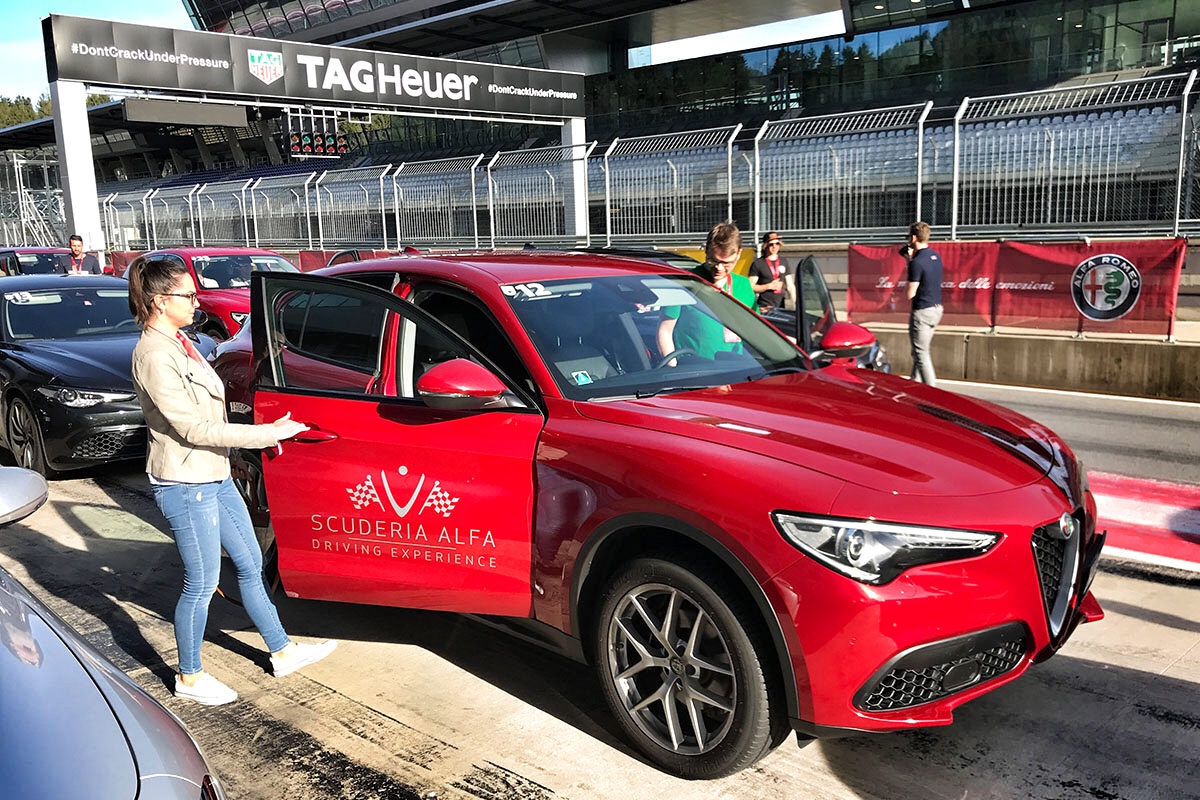 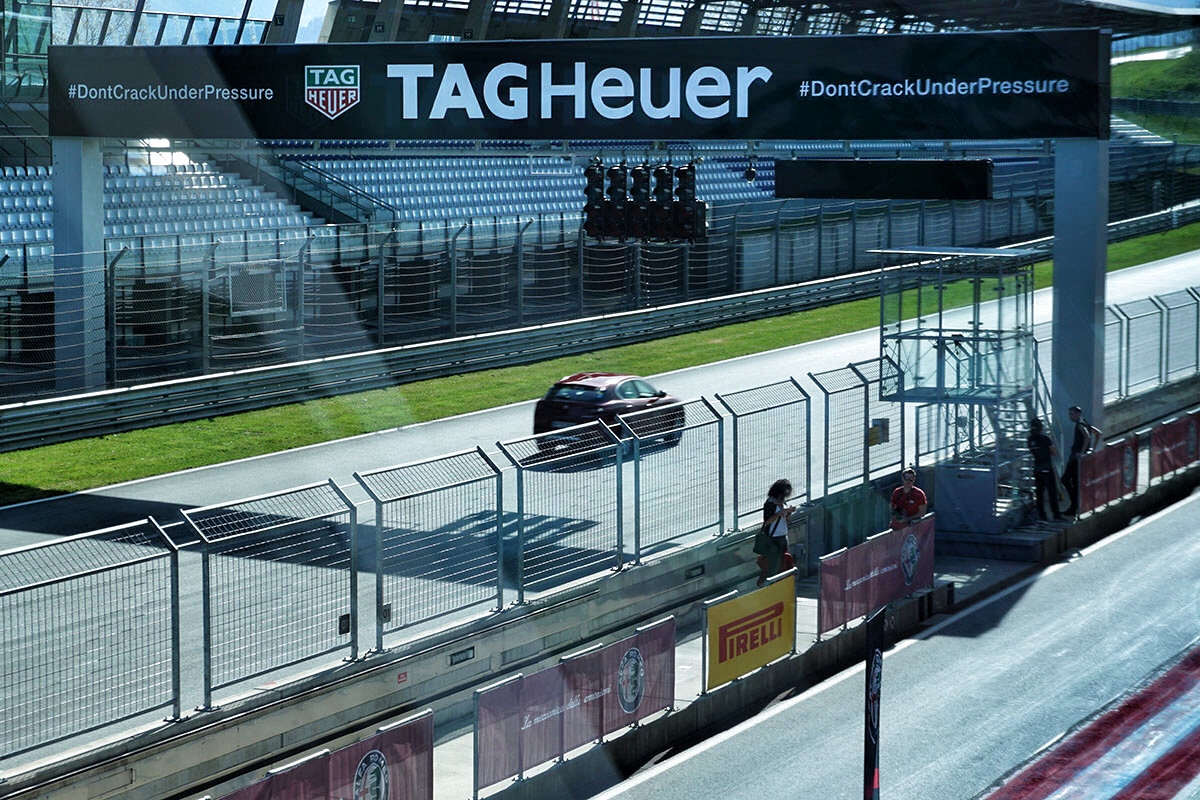 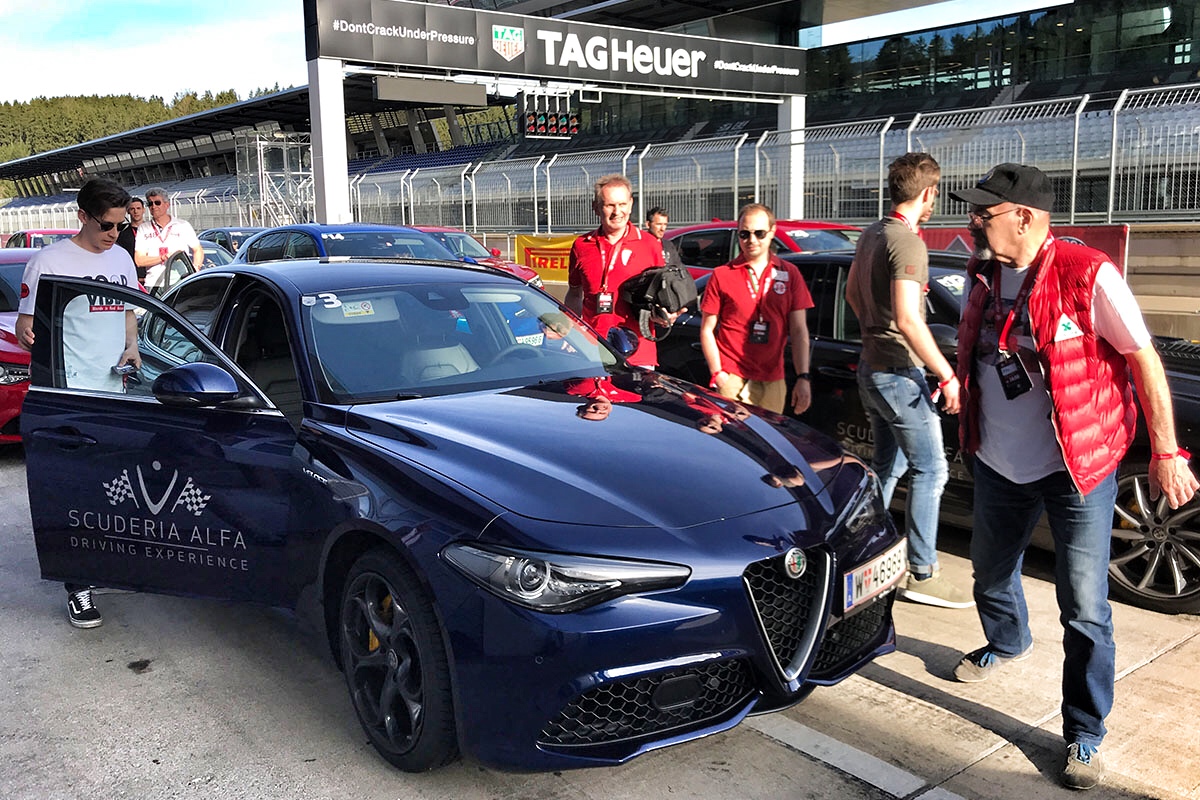 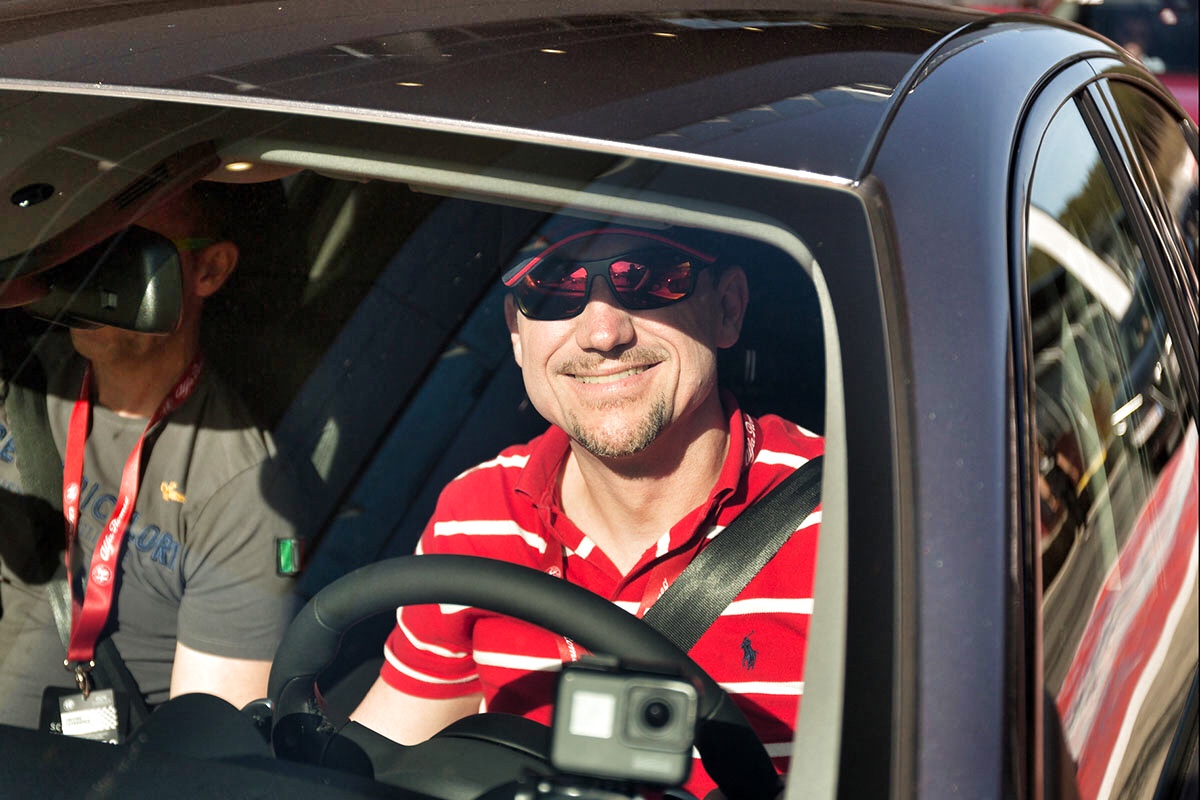 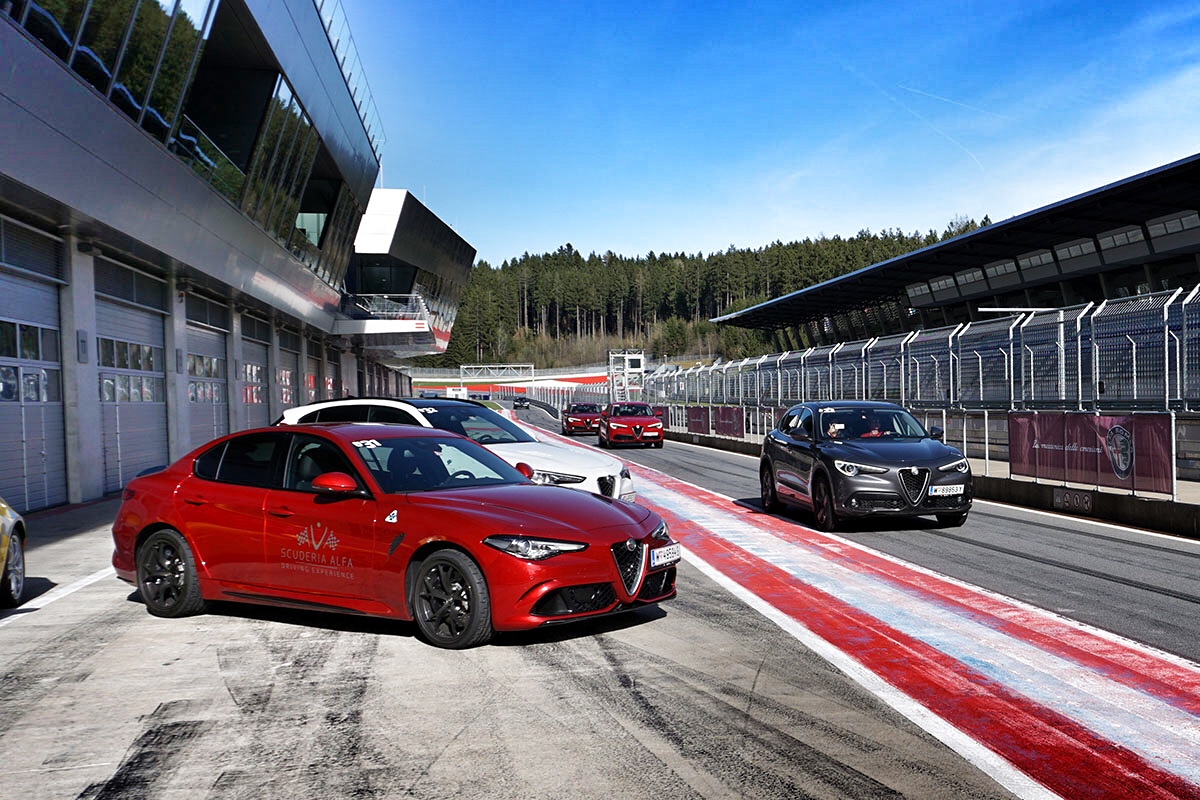 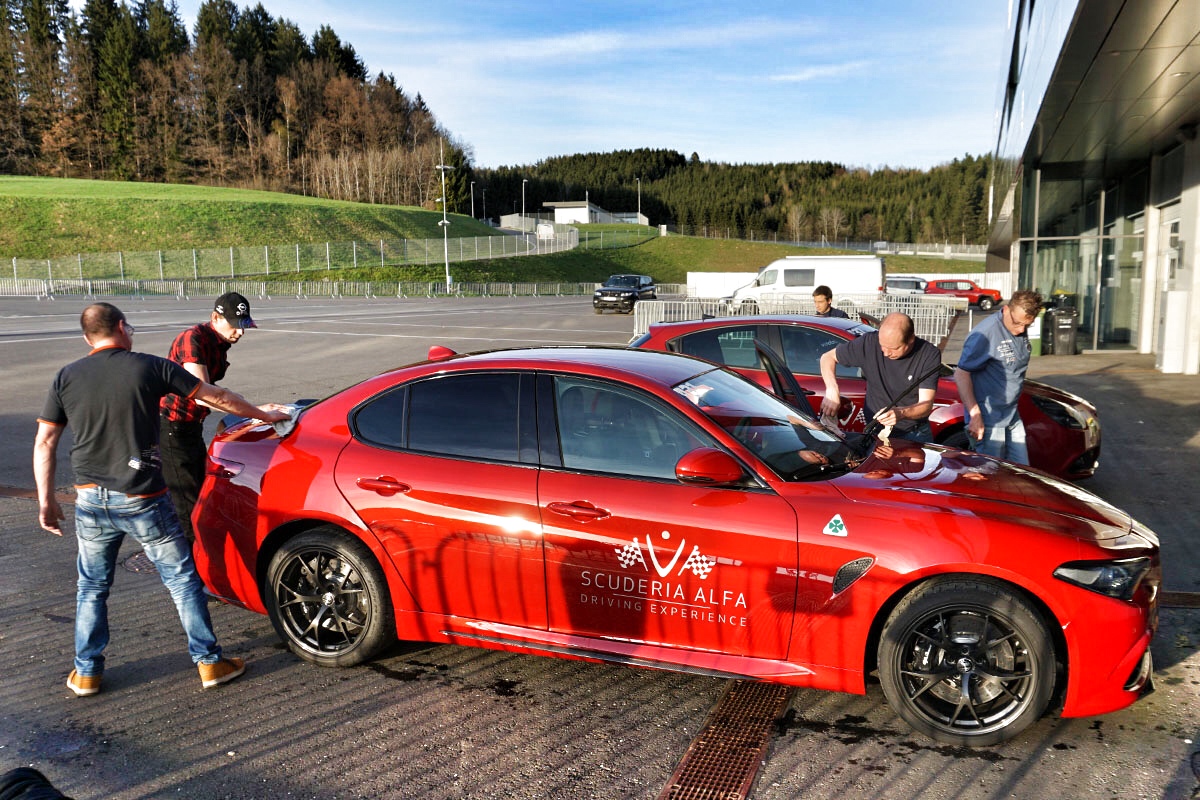 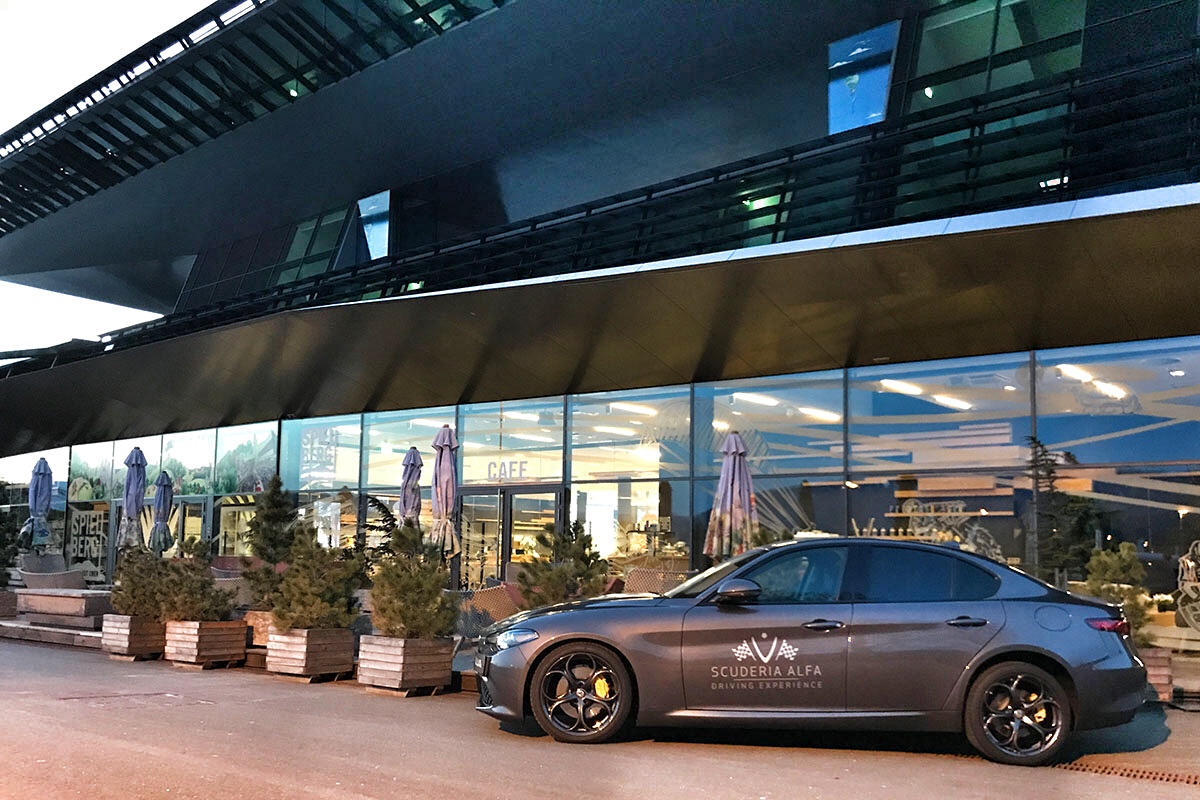 After we both went with the Giulia, there was the previously described wagon change at the box. Now it was finally the car that I fell in love with just a few years ago. An Alfa Romeo Stelvio Super 2.0 ATX AWD with 280 hp in the colour ‘Rosso Competizione’ on 20″ 10-spoke alloy wheels. It’s a real eye-catcher, because he combines the world of SUV and sports car very well. And so impressive it was driving him then. At first I noticed the very noble and high-quality interior and then it went out again on the track.

The “Free Ride” was somewhat limited in this passage due to a vehicle moving much slower in front of us. As seen in the following second video, however, I was able to create a distance from time to time by slower driving, to be able to test unhindered. For security reasons, overtaking was not allowed, but this restricted the testing possibilities a little. Nevertheless, I could see that this car has an amazingly good road holding for an SUV and is barely able to get off the beaten track, which has put me in real amazement. In addition to the engine, the impressive acceleration values and lightness for an SUV are also attributable to the empty weight of only 1.660 kilograms.

ARMIN ON BIKE Conclusion: For me this excursion into the world of the four wheels was an utterly successful one. This is thanks to the very friendly and competent support of Alfa Romeo Austria and the Motor Village Schönbrunn, here in particular Ilaria Salatino mentioned, and the highly emotional and all technical fines equipped vehicles. The perfect setting and the optimal infrastructure, which was once again offered by the Spielberg Project, should also be mentioned here.

I can well imagine leaving my familiar two wheels once again to be part of the SCUDERIA ALFA. Until then, I would like to wish all participants a lot of joy and success with “La Meccanica delle Emozioni”. Thank you and see you soon!