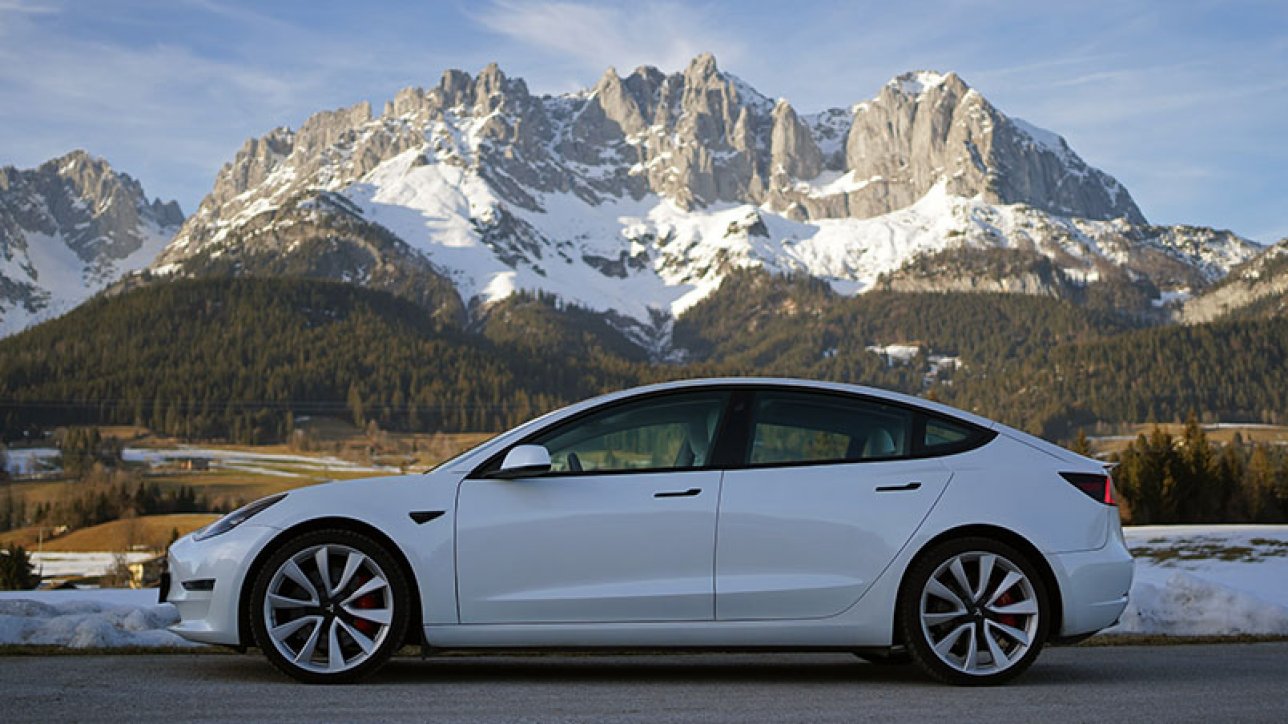 Salzburg – The Tesla Model 3 has had a facelift. The bestseller by the Californian pioneer of electric cars has been refined and now has even more power and range. I was with the top spec “Performance” model for 4 days so that I could extensively test it for you…

Will I get my hands on a Tesla or not? This question for me was exciting in the respect that according to the media, Tesla apparently does not engage in traditional press work or answer journalistic inquiries anymore. Luckily for me, I had exactly the opposite experience and I could arrange a test with the dealership in Salzburg and Tesla’s communications department.

On a Friday afternoon I was able to go and pick up the Tesla Model 3 Performance from the Wals area of Salzburg. After a short run-through with the car, my smartphone could easily be connected with the vehicle, and from then on it would act as my NFC car key. It immediately struck me that something in this car is different. The familiar instrument display behind the steering wheel is missing in the Model 3. Taking its place is a 15” touchscreen in the centre console, from there you can access almost all functions. This is even possible with voice commands, despite that, it looked to me to be a little bit awkward and therefore would take some getting used to. 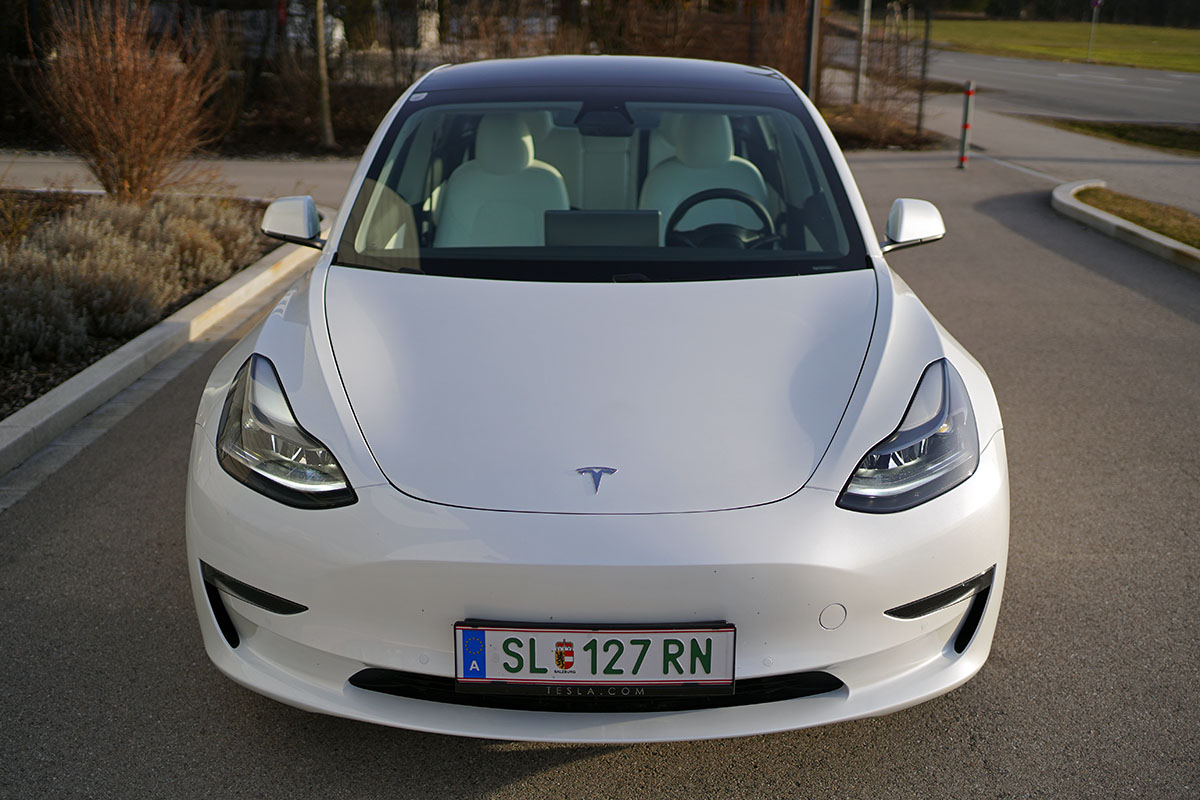 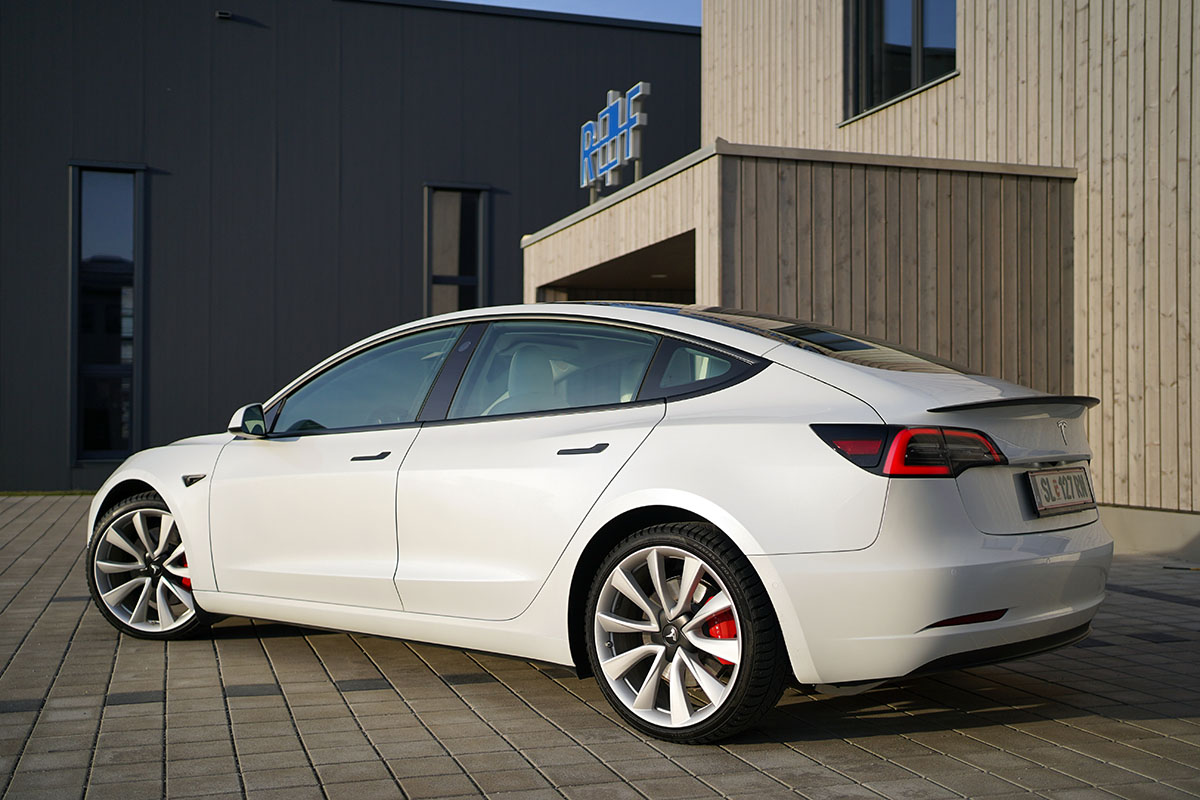 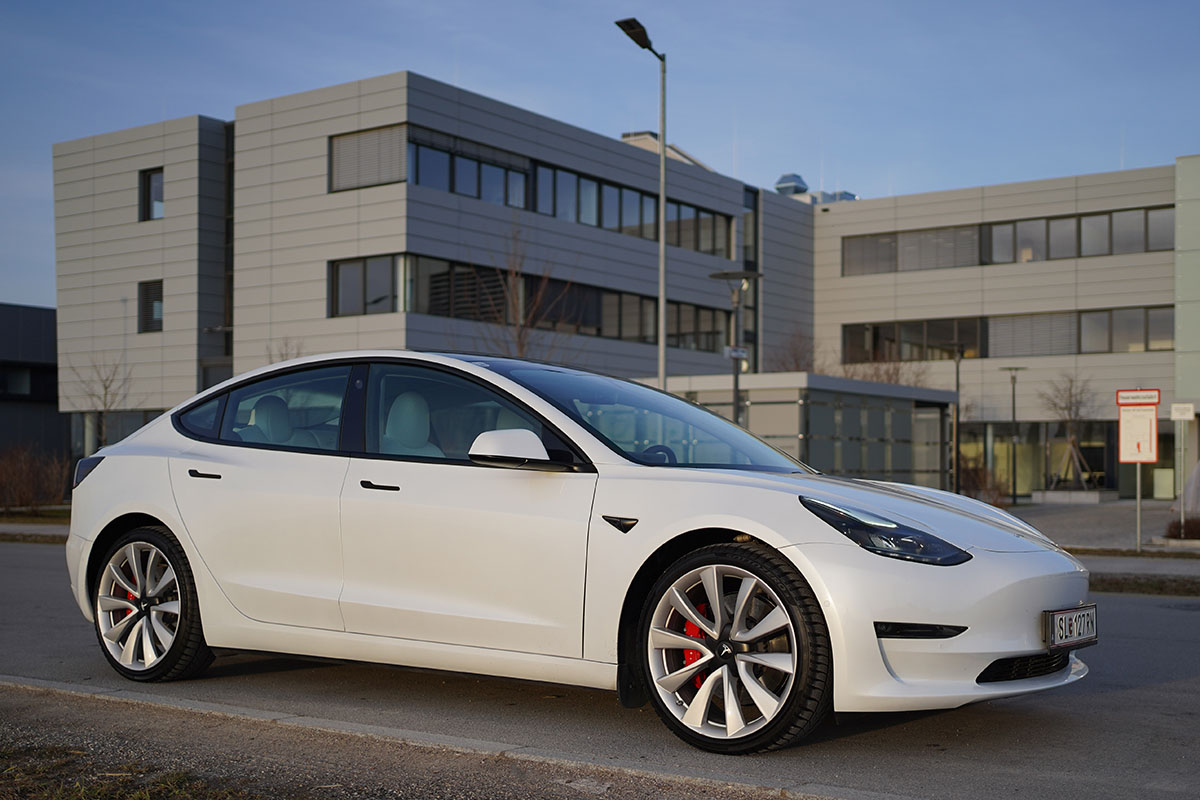 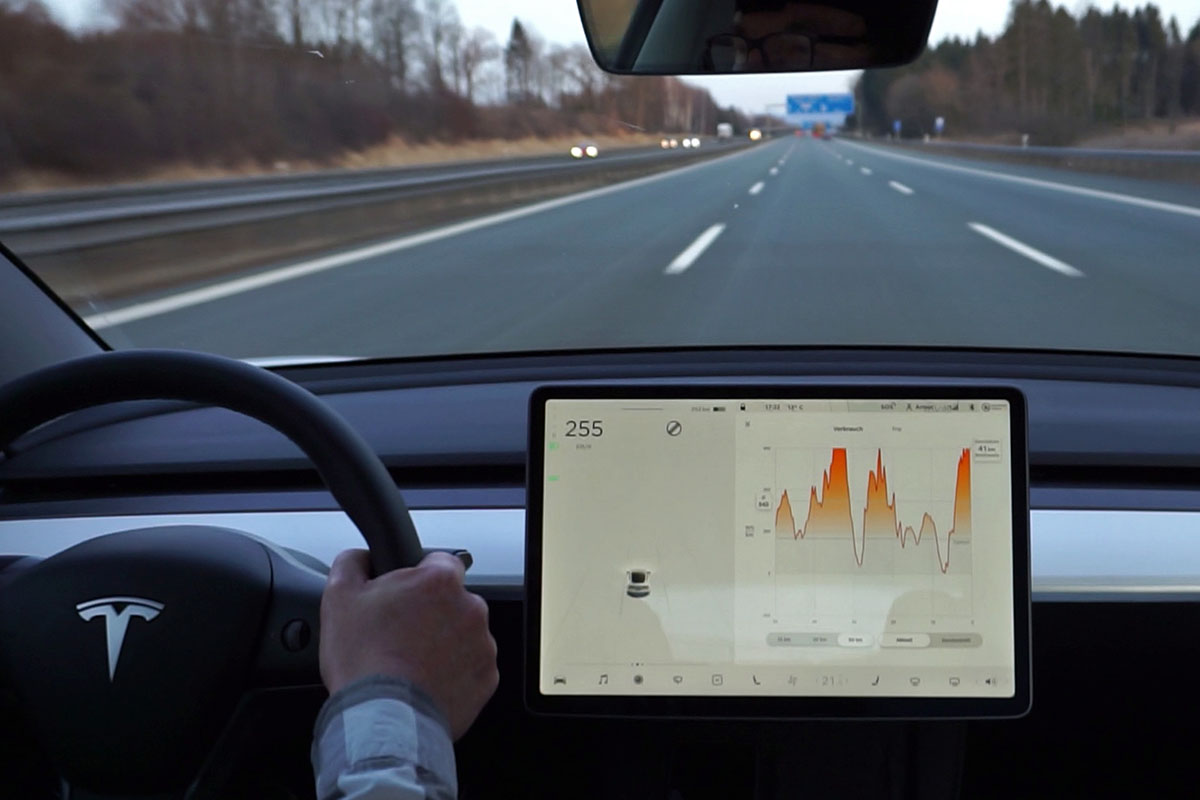 Firstly, I took it out on the German autobahn to test the Model 3 at higher speeds. I quickly reached the 200 km/h (125 mph) mark, however, because of the level of traffic I had to be patient before reaching the top speed of 261 km/h (162 mph). The Performance model, with its lowered chassis and 20” wheels, sits comfortably on the road. Furthermore, because of the now double-glazed front side windows, you can hardly hear any road noise at all. The otherwise moderate battery usage goes up to over 60 kWh/100 km (60 miles) when nearing top speed (see photo). Having arrived home in Pillersee Valley after driving 260 km (160 miles), barely 31 km (19 miles) remained of the initial 487 km (300 miles) range. In light of the speed at which I took the 200 km (125 miles) leg on the autobahn, the displayed average battery consumption of 25.3 kWh/100 km (60 miles) was more than acceptable. By charging with a household power socket I could draw a maximum rate of 2.86 kW (220 V, 13 A) or 17 km (10 miles) range per hour charged. After 14.5 hours, where the temperature was between 1 and 3 degrees centigrade outside, the battery was back to 51% with a range of 254 km (158 miles) on the clock. With the reworked Model 3 battery pack the energy density could be increased by 5%. Therefore it has a capacity of 82 kW of which 76 kW is usable. So in practice a range of up to 450 km (280 miles) is possible. The new heat pump reduces the load on the battery by heating it and contributes to limiting the range you lose in lower temperatures. It reduces the storage space a little bit in the “front trunk” (what Tesla aptly named the frunk), however the charging cable as well as the warning triangle still both have plenty of room.

CHANGES AND IMPROVEMENTS FOR THE INTERIOR

On the outside not much has changed on the reworked Model 3. The formerly chrome trim is now in black and the alloy design is new as well. In exchange, Tesla has made its finishing touches to several areas of the car’s interior. The biggest change is the middle console, which is now in matte black and therefore less vulnerable to scratches and fingerprints, like it was in the last iteration with its polished piano lacquer finish. Stitched seams on the side add to the look of high quality. The shelf at the front of the console, covered in alcantara, with wireless charging places for two smartphones no longer has a cover, and therefore makes for easier access. 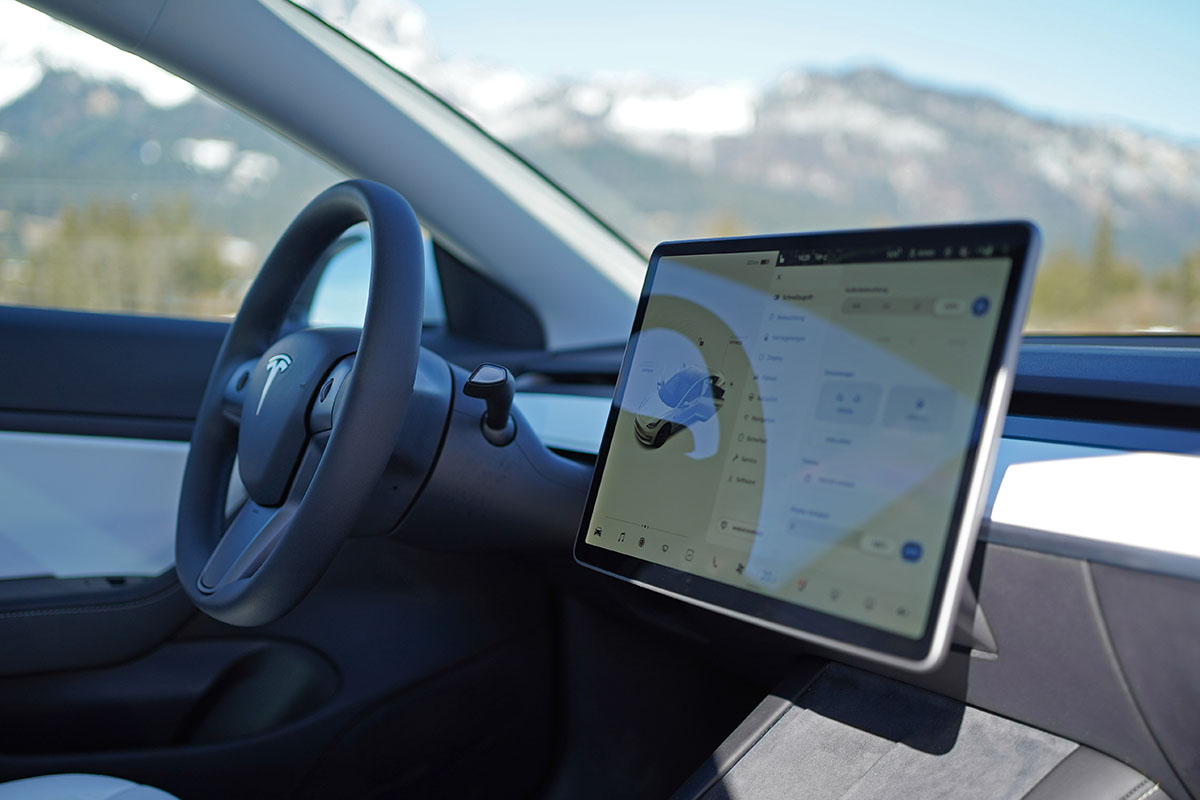 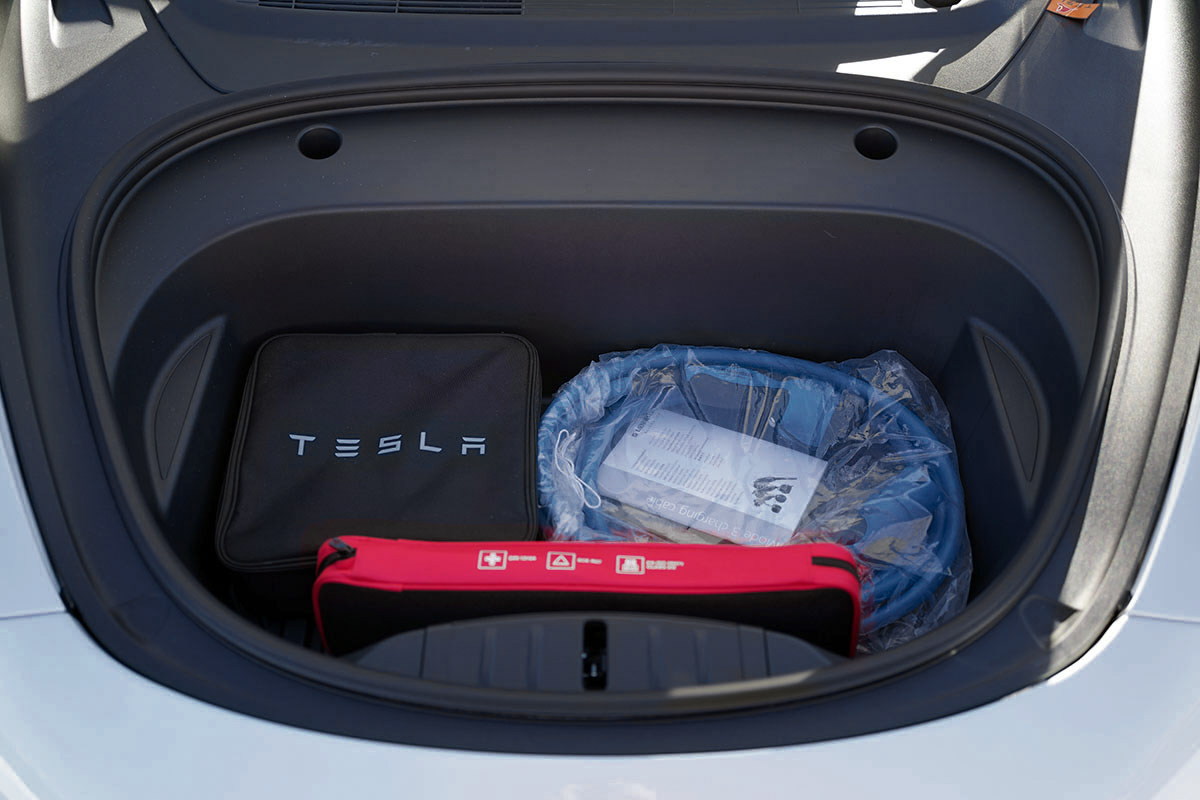 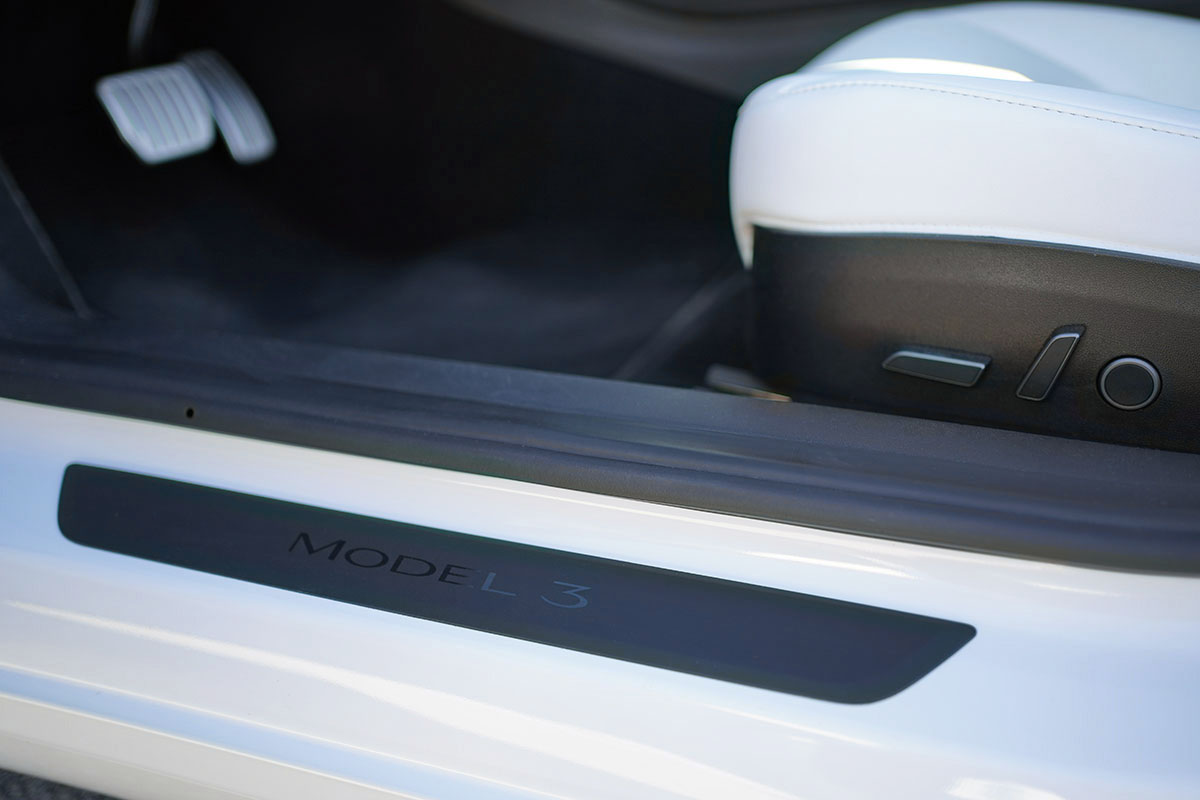 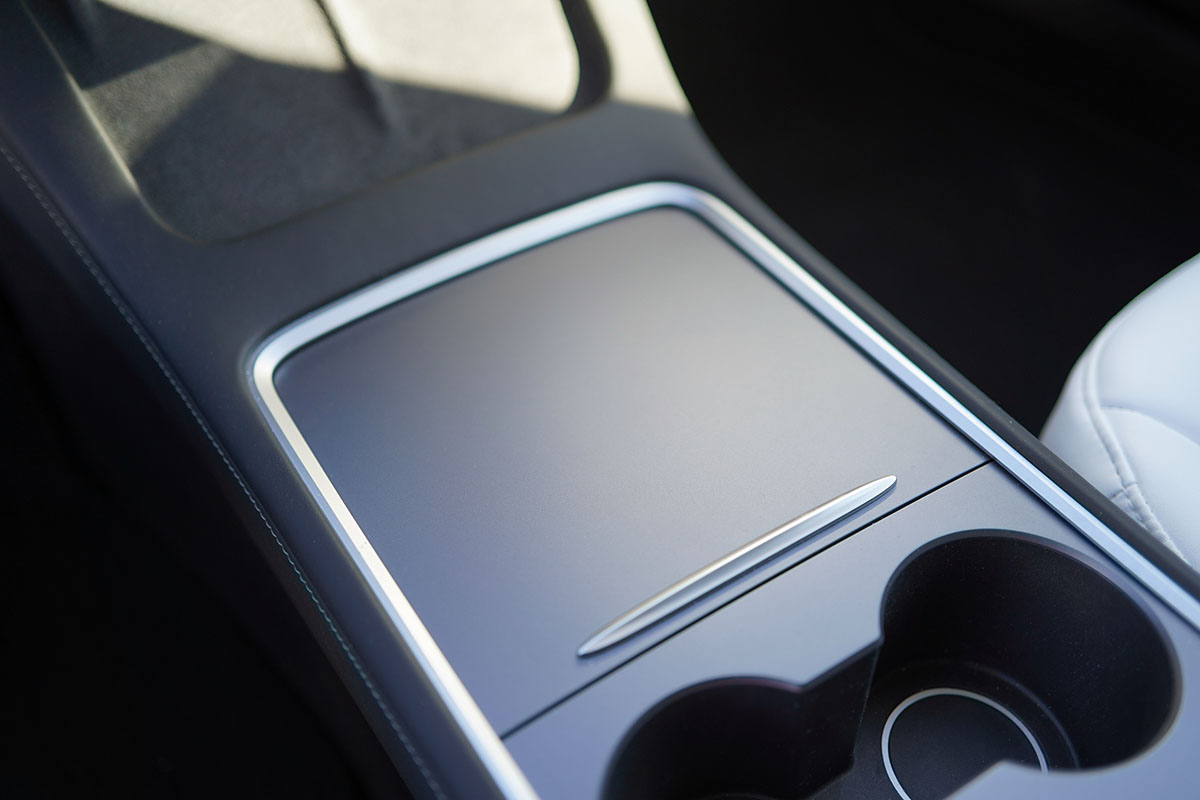 The clearances were perfect in the test vehicle, Tesla has obviously worked out a previous issue. In line with the exterior trim, the door well trim is also in matte black this time. The seat adjustment levers are still made of plastic, however their design has been updated. Also included on the list of updates is the rear-view mirror, the long-awaited heated steering wheel sadly didn’t make it on though. The trackballs set into the steering wheel had been in plastic until now, the new iteration boasts metal trackballs. The rear boot opens up automatically and closes at the touch of a button. You can control it directly on the boot door, with the in-car display or through the app. Furthermore, the Tesla app comes ready with an extensive list of functions. As well as the NFC car key, you can find the car’s location, operate and monitor the charging function, turn on air conditioning and use various other functions. The Model 3’s summon function didn’t work for me though.

SELF-DRIVING ONLY PRACTICAL UP TO A POINT

For me the self-driving in the current stage of development is a double-edged sword. On the one hand, it supports the driving experience and serves for a higher degree of safety, on the other hand, it occasionally caused more stress than conventional driving. How did I come to this conclusion? To switch to “Autopilot” mode, you pull the right-hand lever on the steering column towards you twice. Pulling it once will activate the speed control function, which depends on the distance from the car in front. The usually grey steering wheel symbol turns blue and the car follows the road as if guided by an invisible hand. It also recognises road signs and traffic lights. Automatic lane changing on the motorway can be activated with the indicators. If the “Navigate on Autopilot” function is activated, the car follows the route selected and autonomously takes the correct lane or junction. Fundamentally this works very well, however not consistently. The problem is that it is impossible to anticipate when the function will get confused and as a result instantly turns off. This can become very stressful, particularly around fast corners on country roads.  A further point that proves the limitation in terms of practicality, is that due to European law you must tug lightly on the steering wheel every 15 seconds, so that the system knows someone still has their hands on the wheel. If you pull a little too sharply the system deactivates. The lane departure warning system and the cruise control with follow distance settings were however very practical, which reliably heightened safety. 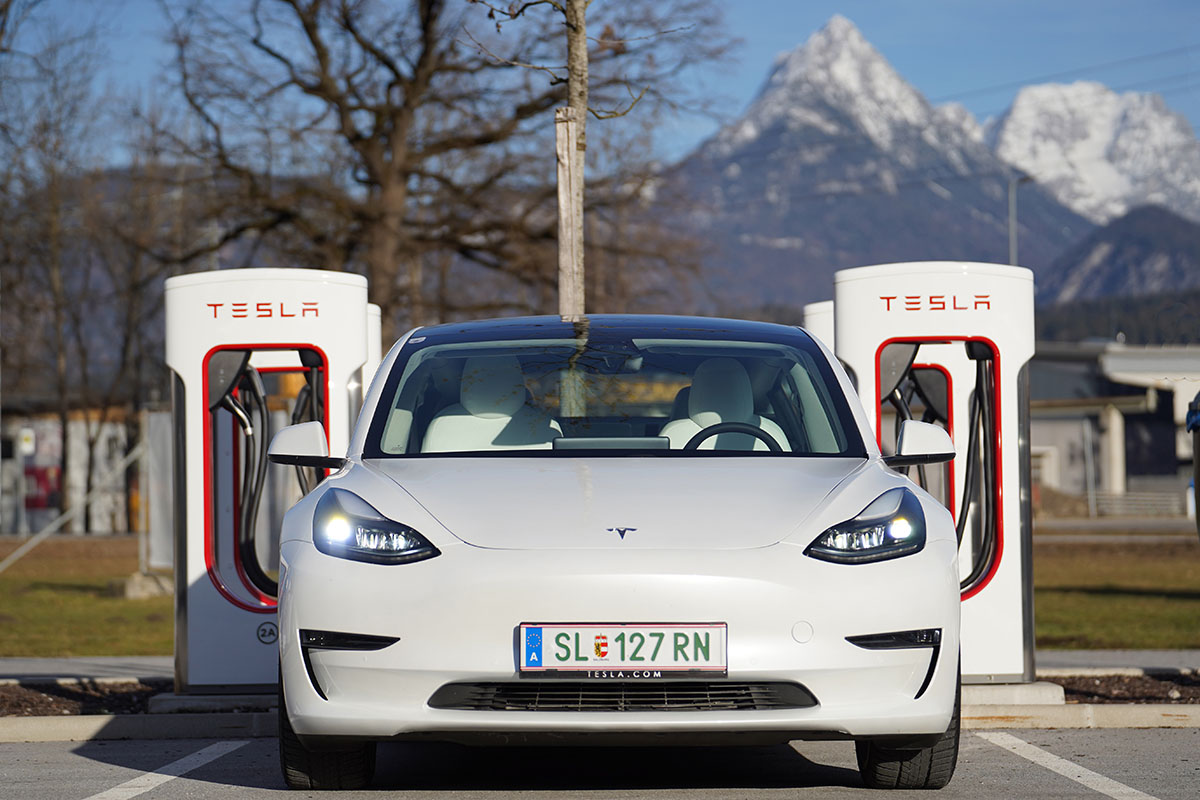 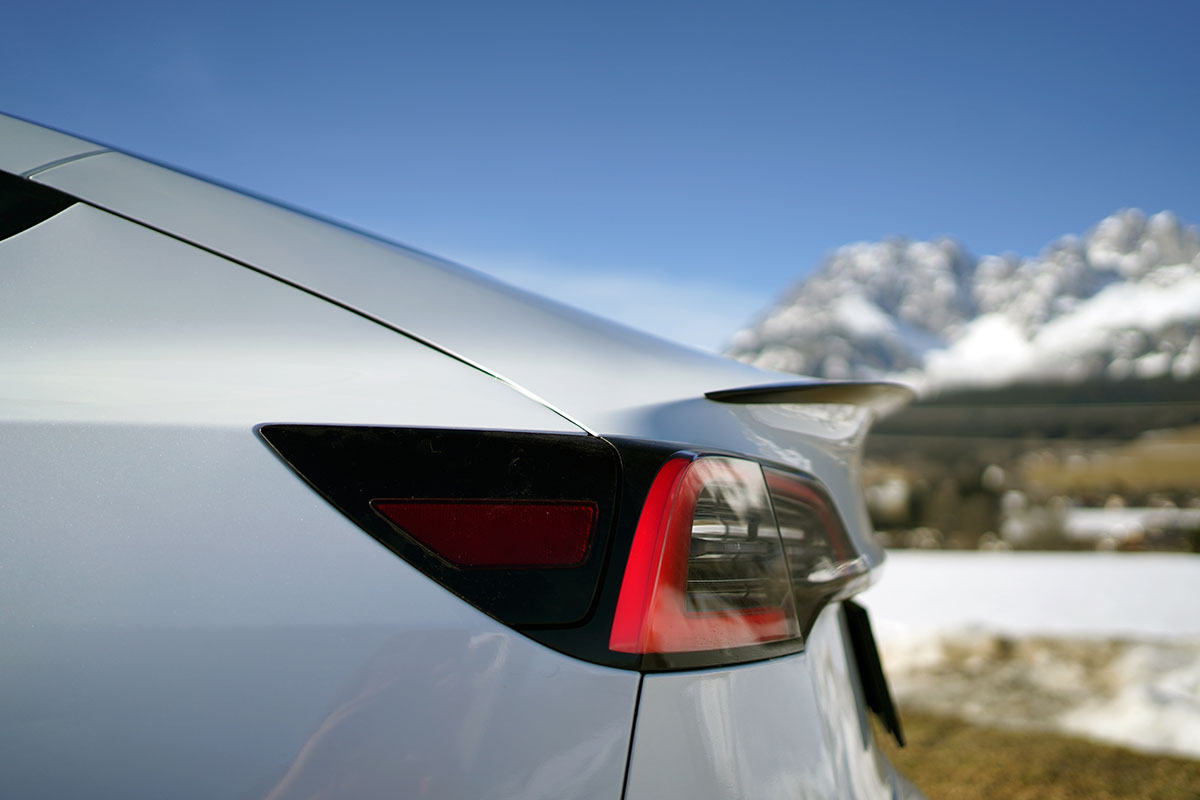 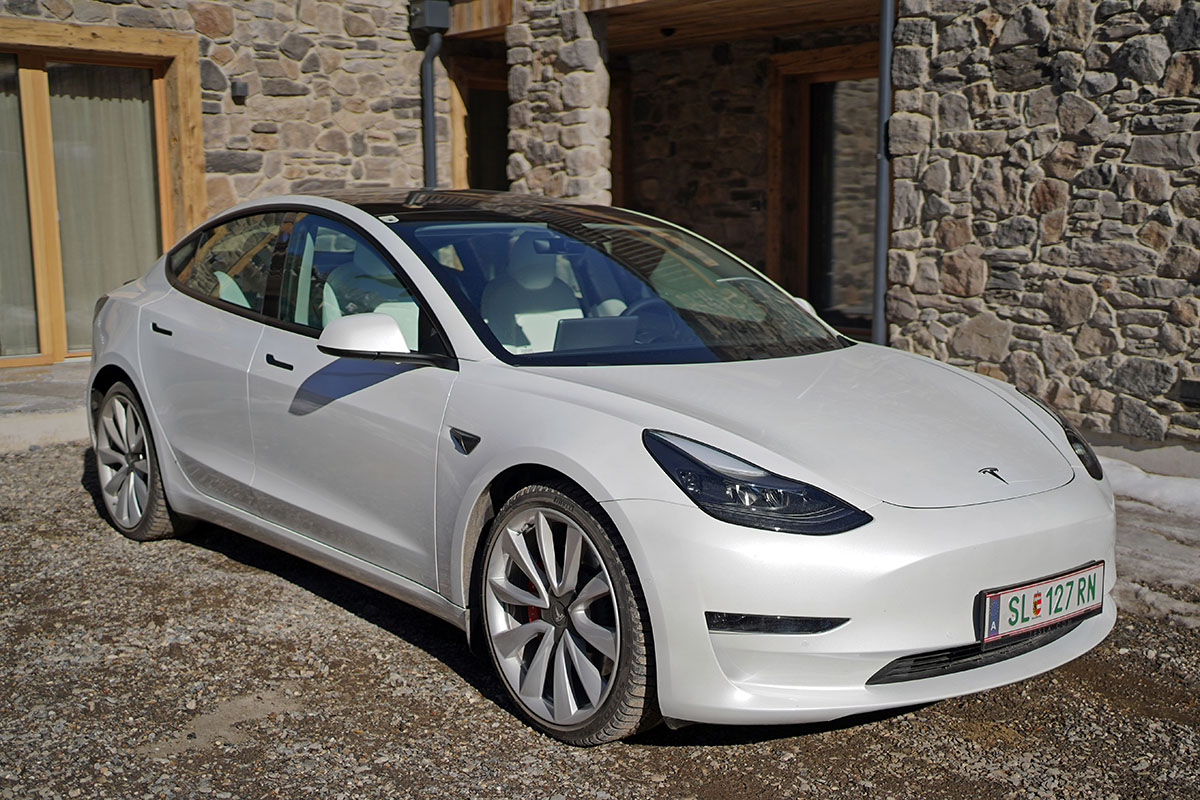 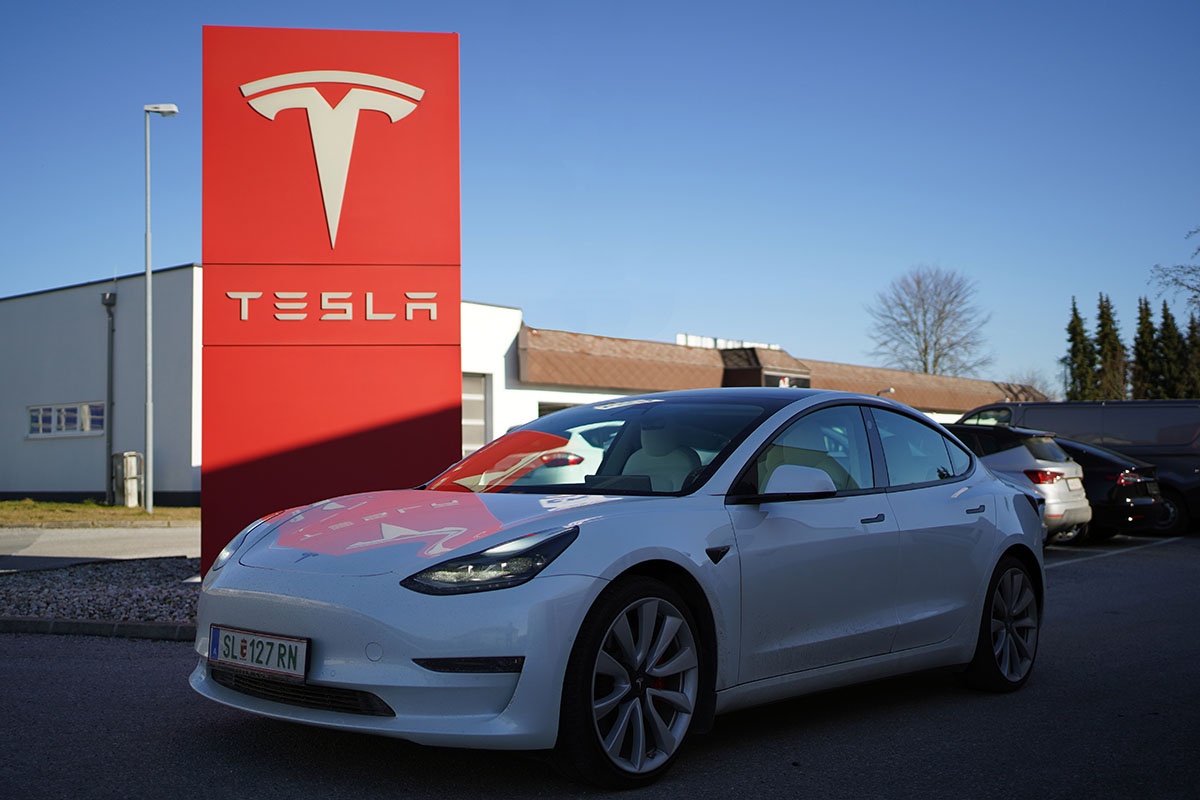 CHARGING PERFORMANCE WITH SUPERCHARGING LEFT MUCH TO BE DESIRED

The next day I drove from Pillersee Valley to the nearest Tesla supercharger, which is located about 20 kilometres (12 miles) from Kitzbühel. After a 30 minute drive I arrived at the charging point with 47% battery charge and 5 °C (41 °F) outside. 8 minutes beforehand I’d sent the supercharger’s location from the app to the car and received the notification “the battery is being preconditioned for supercharging”. Since an update in 2019, these second generation supercharging stations have been capable of a charging rate up to 150 kW. There was no other car plugged in, I tried it with two different charging posts and could only reach a maximum of 48 kW. Furthermore, when Tesla says that the peak charging rate can only be reached under optimum conditions, it was quite disappointing.

In the afternoon I drove with the navigation system to the supercharger in Langkampfen for another test. The travel time took three quarters of an hour, it did not indicate that the battery was being preconditioned. In the meantime the outside temperature had risen to 14 °C (57 °F) in the sun, and the battery on arrival was at 55%. At the beginning I could draw 55 kW for a short time, this dropped steadily during the charging process down to 37 kW. A few charging posts later the parked Model 3 charged at a rate of 119 kW with the battery at roughly 40%. When Tesla reported to me upon request that my car had presented no technical faults during the charging process, I was surprised to say the least. According to the information I received, the low charge rate was due to low battery temperature (11 °C|52 °F, ideally it is over 30 °C|86 °F) and the high battery level when charging began.

At first, the immense acceleration was a bit frightening, since the high power gave me an unpleasant feeling. This passed quite quickly though and from then I enjoyed every single launch start. The linear power delivery consistently put out by the electric drivetrain was impressive every time. In ideal conditions the 513 horsepower and 660 Nm of torque propel the bullet of a car from 0 to 100 km/h (60 mph) in 3.3 seconds. Such a feat lands the Model 3 in superbike territory, for example that of the Ducati Panigale V4. Only from 100 to 200 km/h (125 mph) does the motorbike pull ahead. For that the Tesla Model 3 Performance takes about 11 seconds, while the superbike manages it in a mere 4 seconds. In a cooler outside temperature I managed the sprint from 0 to 100 km/h on winter tyres in 3.7 seconds. But see for yourself in the following video…

Tesla has reworked its bestseller the Model 3 with much care and attention, and improved it in detail. For the build quality there is still some room for improvement, but they are on the right track. There is only one word to describe the driving performance of the current fastest, factory spec electric car – breathtaking. Despite that, the battery use keeps within its limits even at a quicker pace. On average I got by with 17.2 kWh per 100 km, which is a good consumption rate considering what is offered. Pair that with the 82 kWh battery and the Model 3 is suitable even on long journeys without any want for much more power, all the more so that the newest generation of superchargers promises a charging rate of up to 250 kW. It would be desirable that high charging performance is not only possible under optimal conditions, since that would make use more flexible. The price for the Model 3 Performance starts at $54,490 in the United States minus any promotions. For that you can get your hands on the most sophisticated electric car on the market and a sports car feeling to boot.