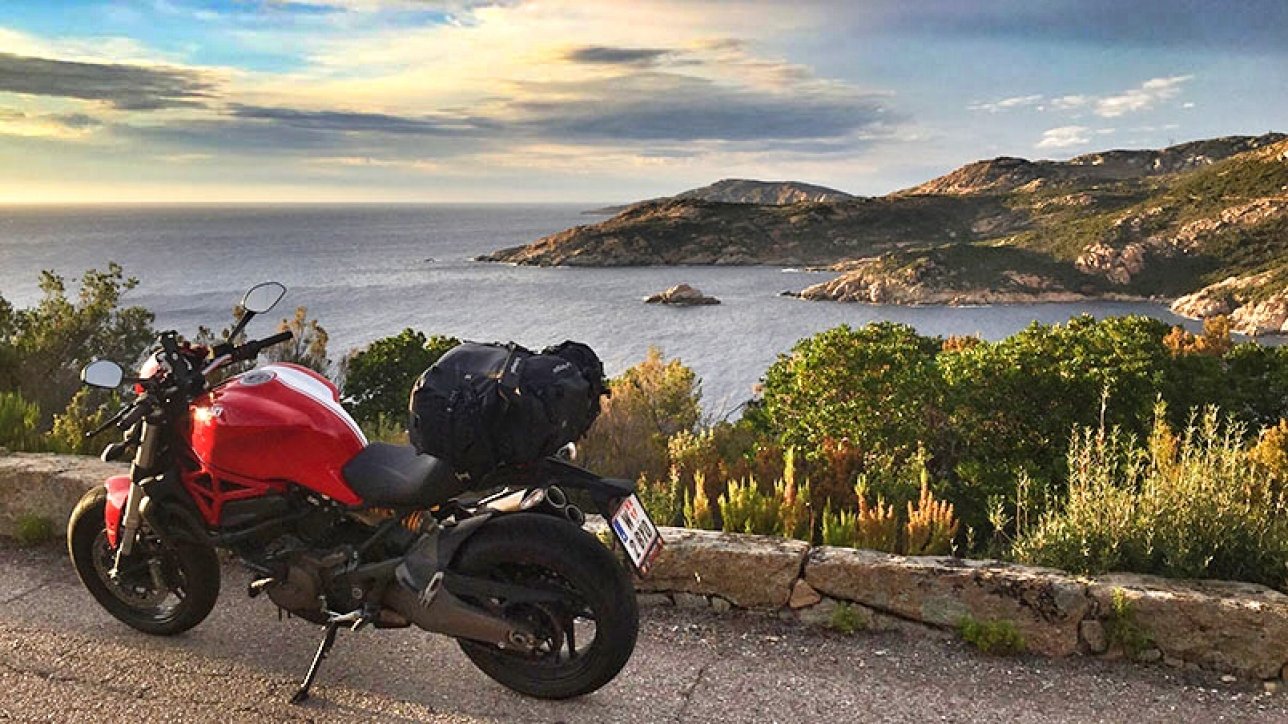 Marine de Porto | Corsica – Bonjour France. I was greeted by a gorgeous morning at 6:30 am. It´s tempting to take an early bath in the sea, but the outside temperature of 19°C and the much colder water restrain me from doing so…

In Sardinia at the latest I´ll be able to unpack my bathing trunks. It was a long day yesterday and after a 15- hour trip I arrived here at 10 pm sharp. The actual travel time was a little over 4 hours for a distance of 180 km. This says it all about the way and numbers of curves there are, particularly as you can drive really fast for quite a bit before reaching Calvi. Arriving in Corsica, my journey began in Bastia. The circa four- hour passage from Italy was really pleasant, the view upon arrival over the slightly cloud-covered Corsica was brilliant. The descent off the ferry was rather hectic and exhausting for a short moment. France, here we come! As I had no time to fasten my luggage on my Monster, I buckled on, for the first time, the two Dry bags along with my shoulder strap. Weight wise it was okay, but it was almost past the limit for me. 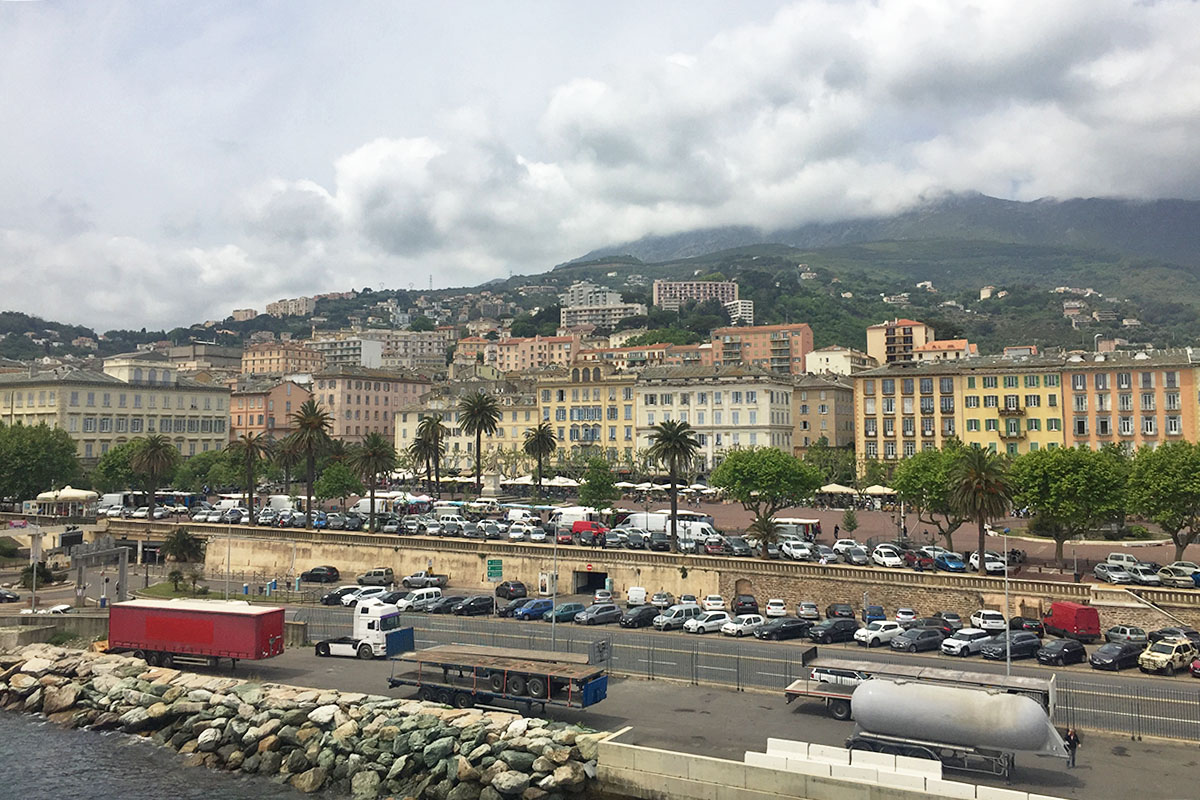 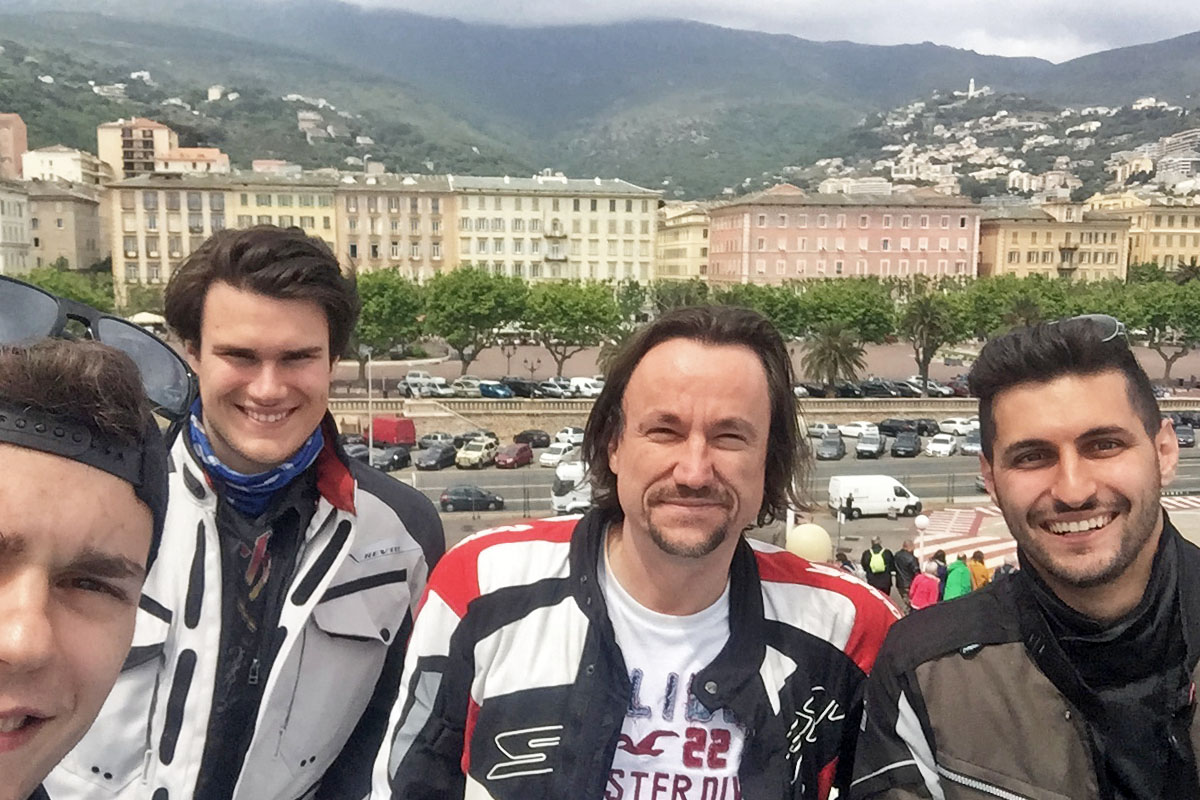 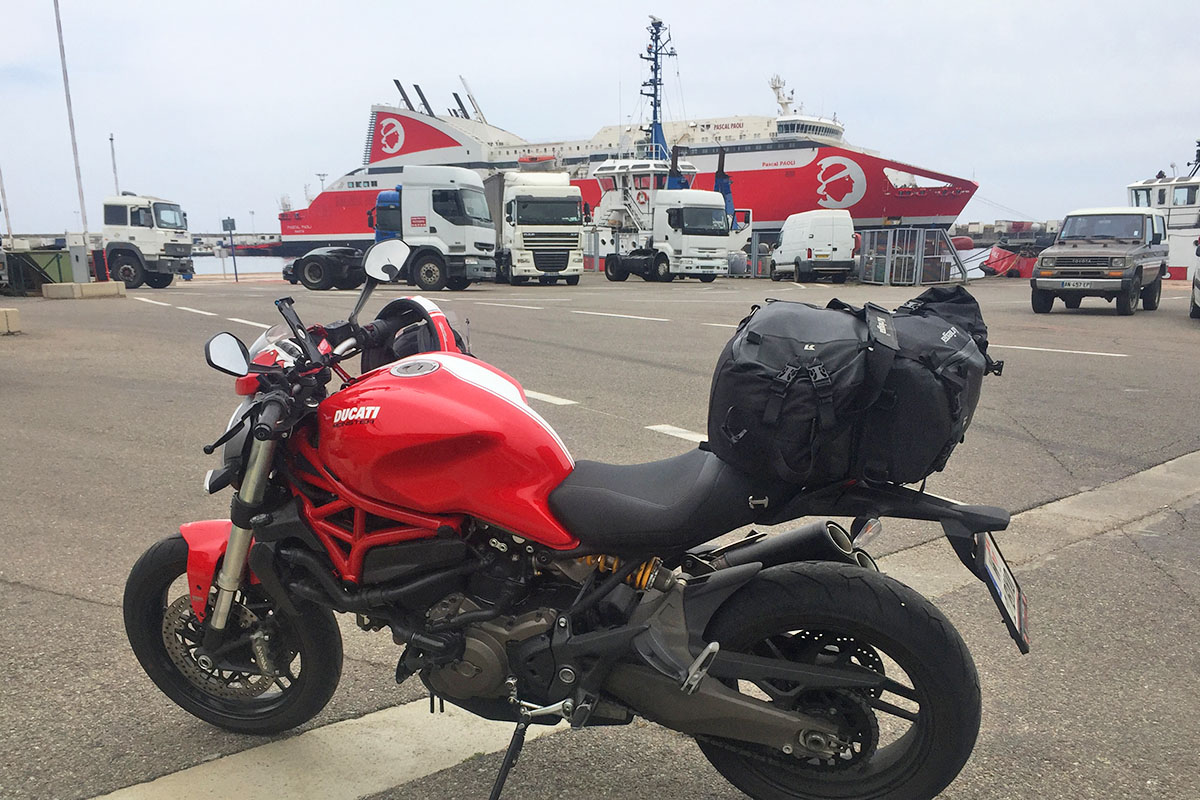 Driving through a tunnel in Bastia, I quickly realized that one drives a bit differently here. As I speeded, in my usual way, in a long curve between cars, I had to discover that everyone else was doing the same. That was close, but everything was fine after all. In Austria I don´t experience this a lot. As usual Google Maps wanted to allure me from taking my planned route. It doesn´t bother me anymore, I simply turned it off. On the ferry, Daniel gave me some tips regarding a new kind of navigation aid, I won´t travel with Google Maps any longer. I had to reverse a little to drive to the left, uphill into the mountains. When I arrived there and as I descended again to the B81, I had a marvellous view on the Golfe de Saint-Florent. But see for yourselves:

It´s delightful to blog here in the bay of Marine de Porto with a view over the glass-clear sea and the mountains, but at the same time it´s a real challenge as well. Uploading my videos hadn´t been easy, there are always WiFi interruptions and an insufficient bandwidth. Also, while blogging, I´m having storage problems. Even though it costs me some data volumes again, I switched to my mobile hotspot of my iPhone – it´s not that fast either but it´s more reliable. Besides, I have to speed up my blogging.

Even though I only need 4-5 hours of sleep on my trip, which would be unthought of in Vienna, I´m constantly on the move driving, observing, taking pictures, filming and blogging. I already feel a bit overwhelmed, it´s not easy to process these incessantly breathtaking impressions. But I´m just at the beginning. Well, after this short excursion into the life of a blogger, we continue on to yesterday. I had actually wanted to drive through to Calvi but the Bar L´escale at the port of Saint-Florent invited me to stay and I accepted the invite. There I ate a delicious French baguette and finished yesterday´s report, which I had started writing on the ferry. 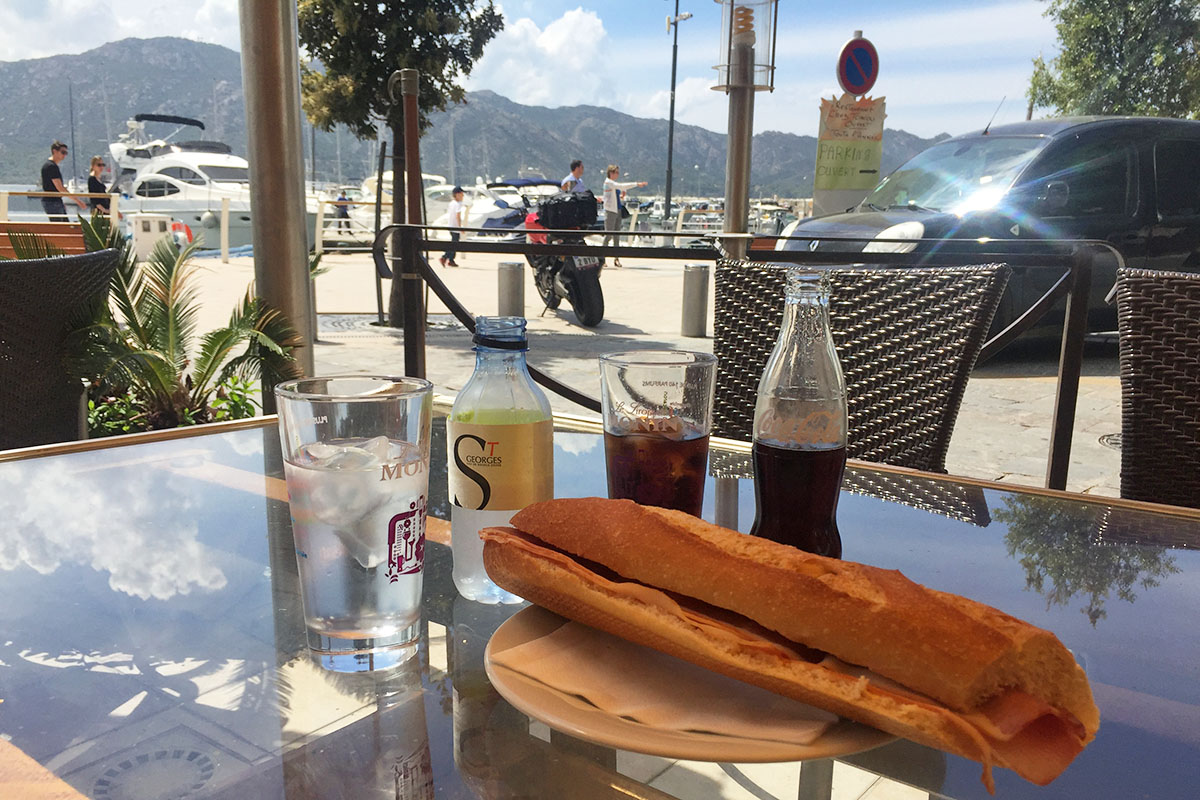 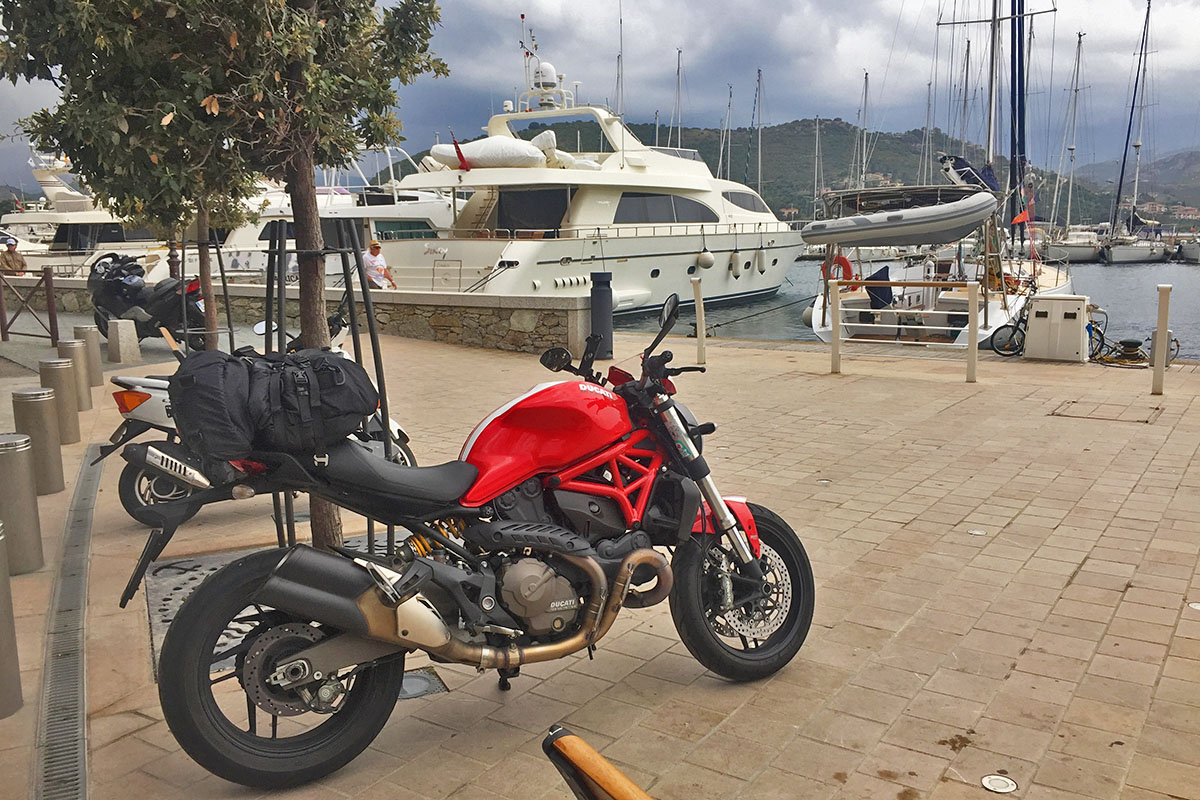 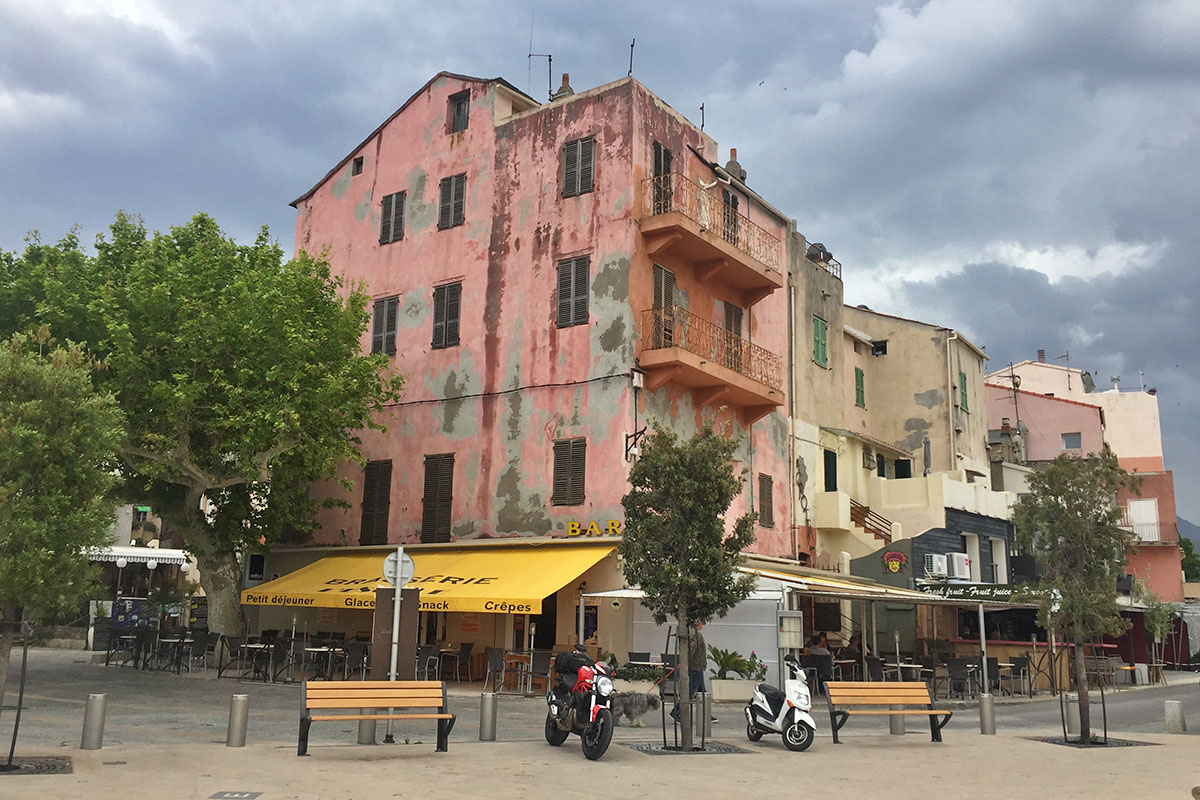 So, now I´m going to start my little Monster, she´s already waiting, unlike the ferry in Bonifacio. I should be there at 3:30 pm. Even though ferries sail regularly, I´m not sure if I can part with Corsica that soon. My beloved Google Maps foretells me a driving time of about 4 hours and 13 minutes for a distance of 212 km, and I have, as I told you before, different things on my mind as well, grin.

If everything goes as planned, there´s going to be more on yesterday and a real highlight of that day as well, the D81b is yet to come. But when I look at what´s happened to my plans so far…