Nockalm Road | Carinthia – Long awaited, revealed in autumn of last year at EICMA in Milan, the new Ducati Streetfighter V4 arrived in June at Austrian dealerships. I seized the opportunity and tested the new super naked for the first time on the famous scenic road in the Carinthia Nockberge mountains…

You take a superbike, remove the fairing and replace both stub handlebars with higher, wider bars, change another few details and you have a genuine finished super naked bike. Ducati has done exactly this and transformed the Panigale V4 into the new Streetfighter V4. 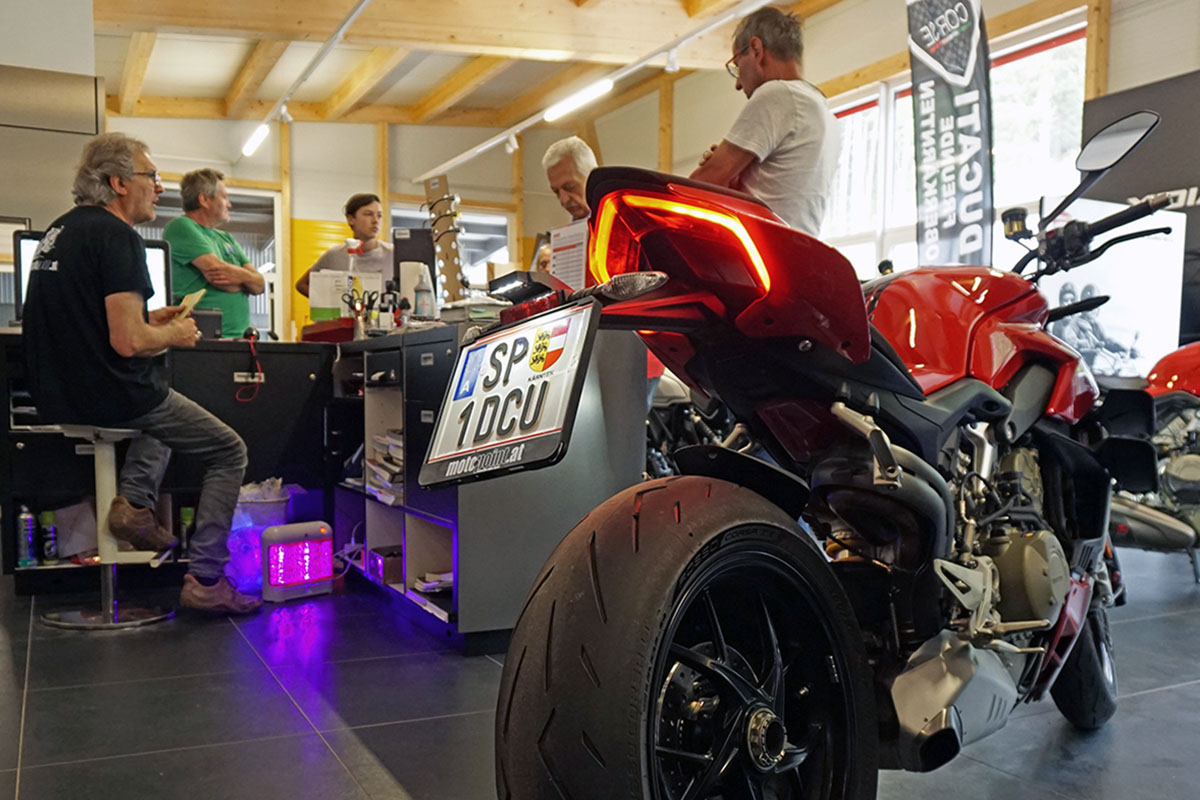 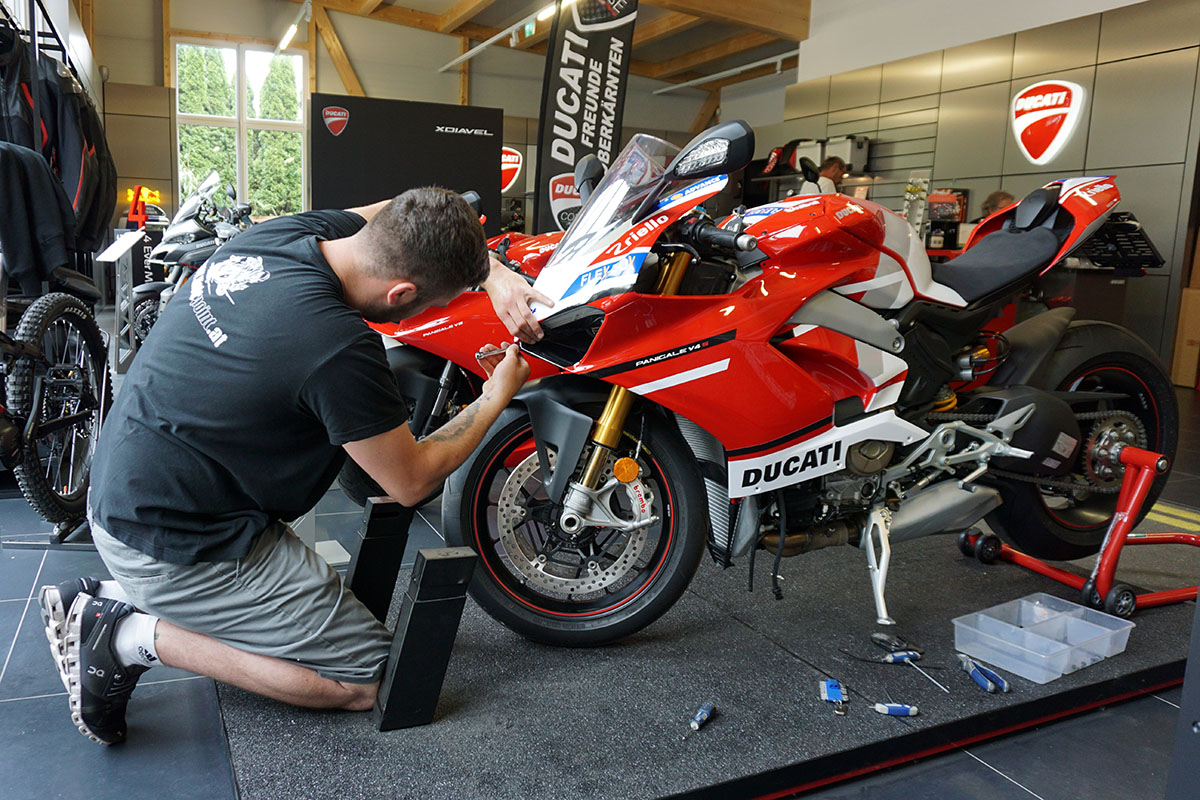 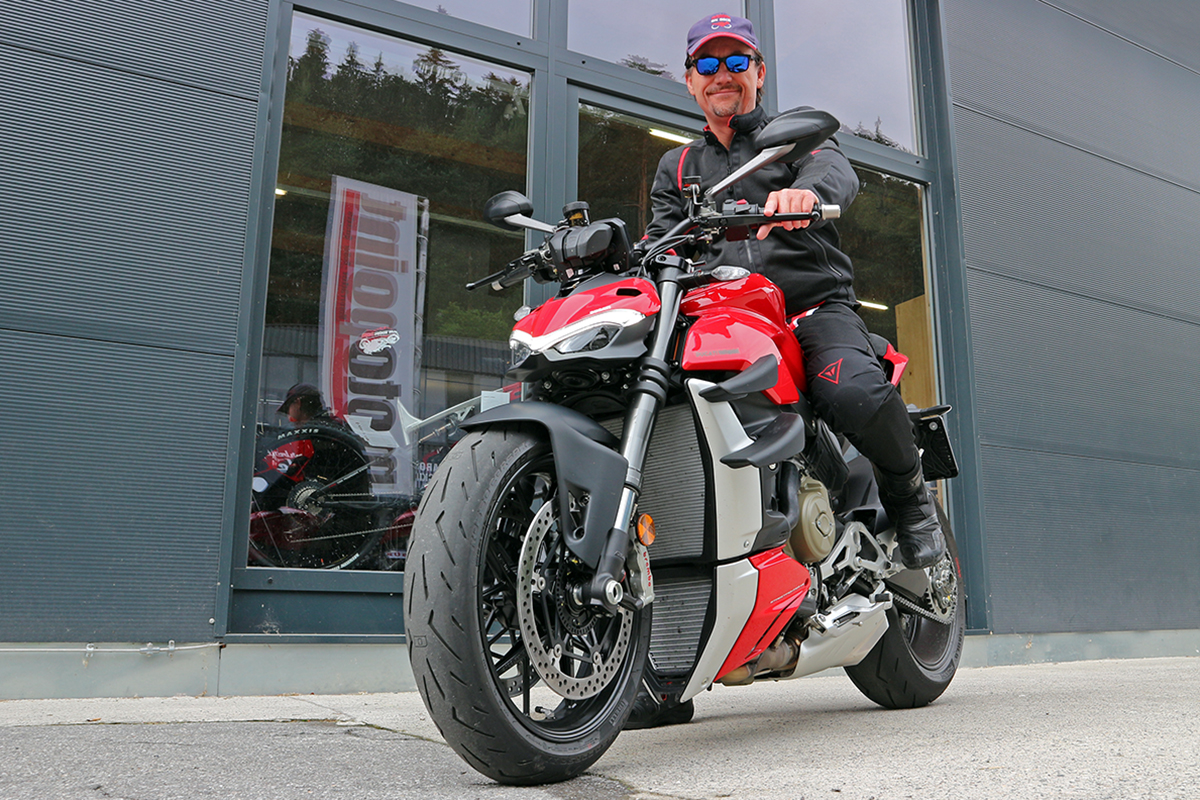 It began at the Carinthia-based Ducati dealership, Moto-Point Granitzer, in Spittal an der Drau. After a short run-through of the bike by Sebi, the junior manager, I got on my way. The first thing that struck me was the higher sitting position (845 mm) in comparison to my Monster 821 (+35 mm). You’re sat upright and even leant forward like in a racing-position. Straight away I felt at home in the saddle, completely integrated into the motorbike.

After I had studied the Streetfighter V4’s performance data in my preparation for the test, I afforded the bike the huge respect it deserved. Never before had I ridden such a powerful bike on the road. Due to the characteristics of the V4, however, the motorbike is very tame at low revs, you don’t have that feeling of sitting on a 200 horsepower rocket. I didn’t notice a huge difference between this and the half as powerful V2 of my Monster 821. I had expected a bit more.

The tables turned however from 6000 rpm onwards and the 1,103 cm³ Desmosedici Stradale engine really took off. Since the Fighter only had around 500 km (310 miles) on the clock, it was still in its breaking-in phase. Above 8000 rpm the rev counter turns to orange to show that it mustn’t be revved much higher just yet. But also in this area I could already guess where this is heading. The maximum torque of 123 Nm clocks in at 11,500 rpm, the 208 horsepower maximum output gets to 12,750 rpm, you reach the red area at 14,500 rpm. 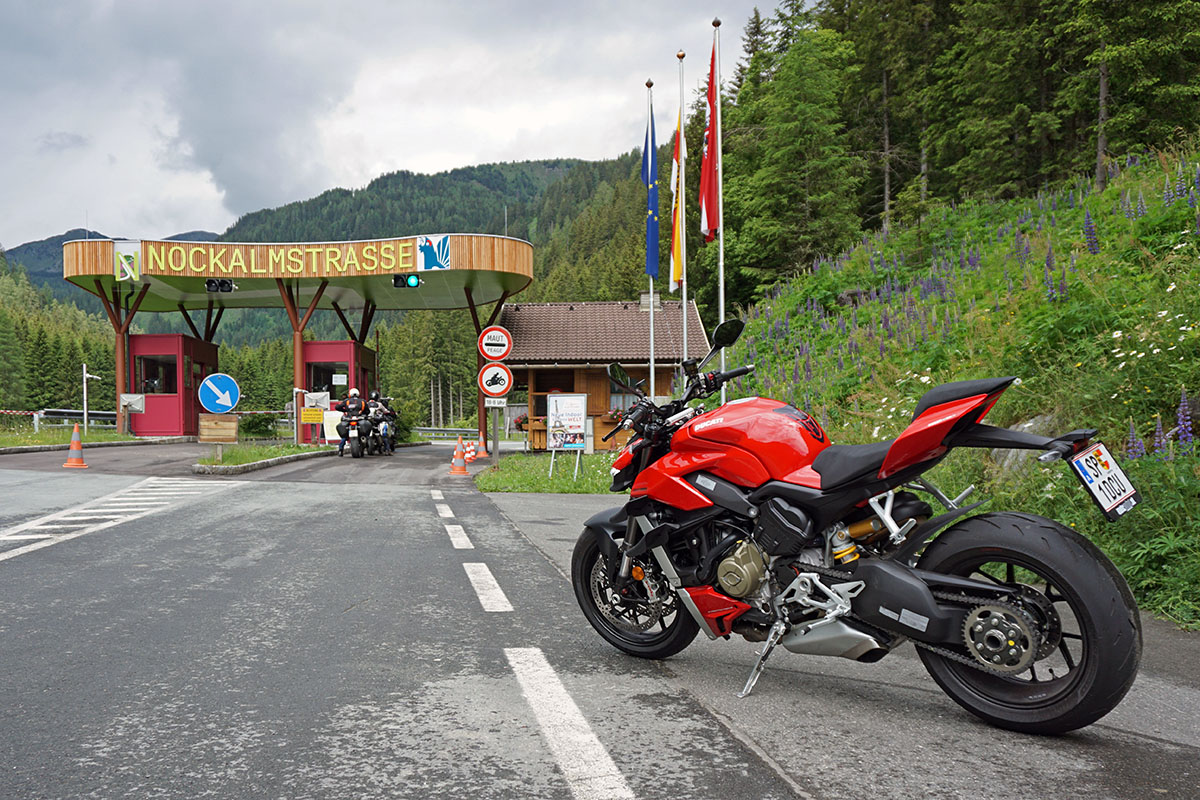 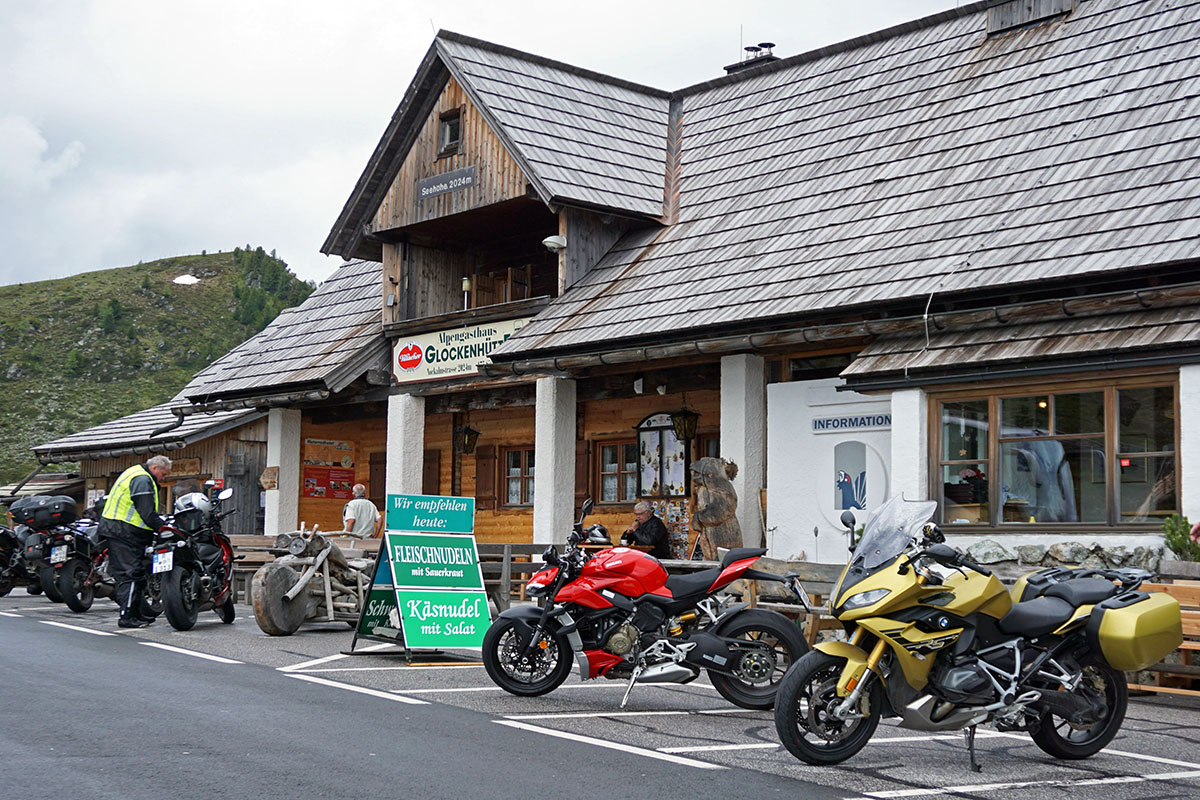 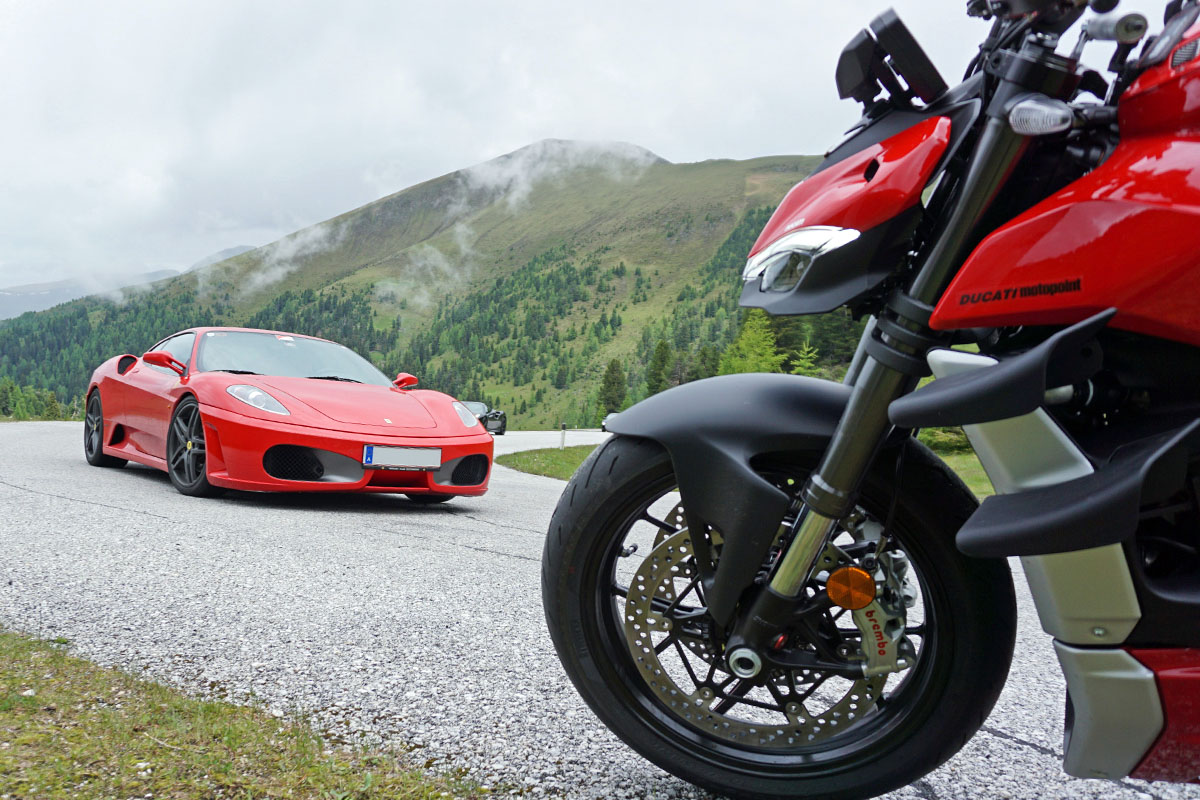 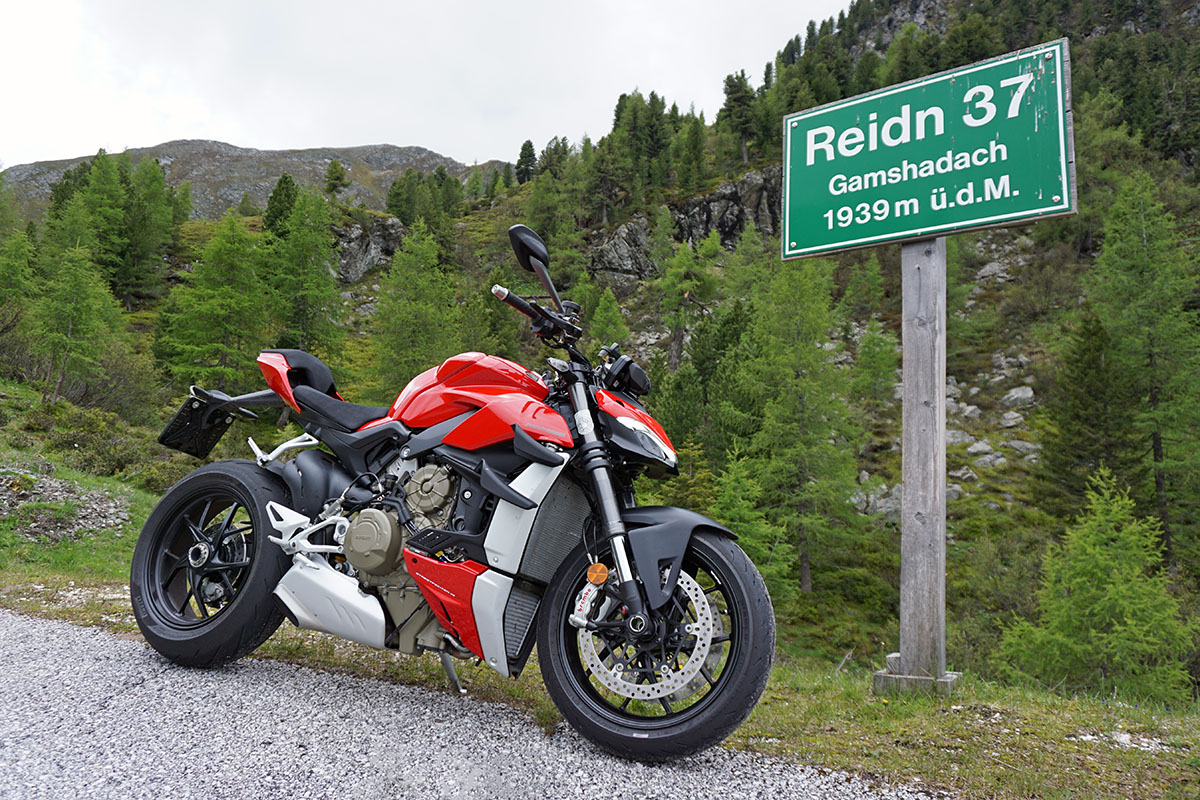 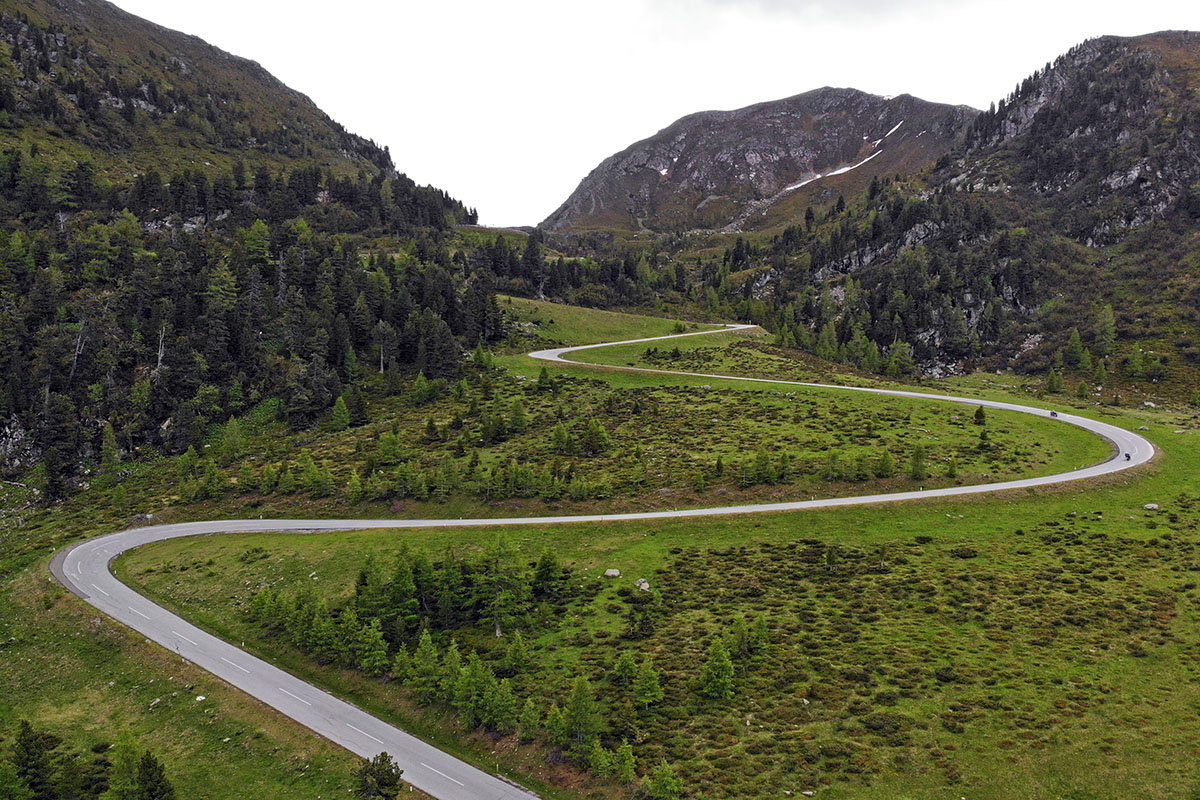 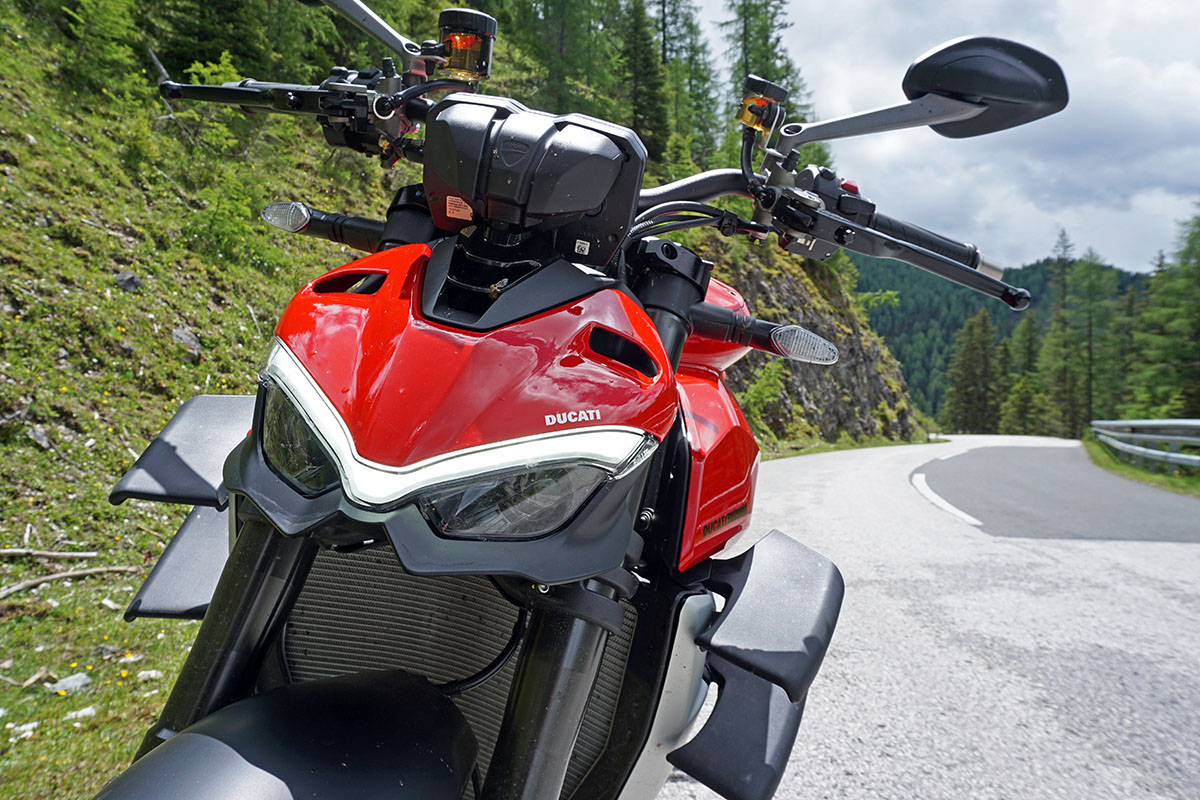 NATURAL PARADISE OF THE NOCKBERGE MOUNTAINS

My route lead me along Lake Millstatt and then on via Radenthein to Bad Kleinkirchheim. Before dismounting on the Turracher Höhe Pass I turned left in the direction of the Nockalm Road. The road is located within the Nockberge Mountain Biosphere Park. At 1,490 km² the outstanding region, declared nature reserve by UNESCO, stretches over Salzburg’s Lungau region and Carinthia’s Nockberge mountains. The 34 km (21 miles) long scenic road twists and turns in 52 corners and countless curves from the Ebene Reichenau area in the south through to Innerkrems in the north.

The weather on that day was touch-and-go. It didn’t rain for the most part, however the road was wet more often than not. Remarkably, there were quite a few supercars on the road as well, looking to use the light traffic as well for an enjoyable drive. The first pass coming from the south was the Schiestlscharte at 2,024 m (6,640 ft) above sea level. Up there you can find the Glockenhütte Inn, which is a popular stop for motorcyclists. 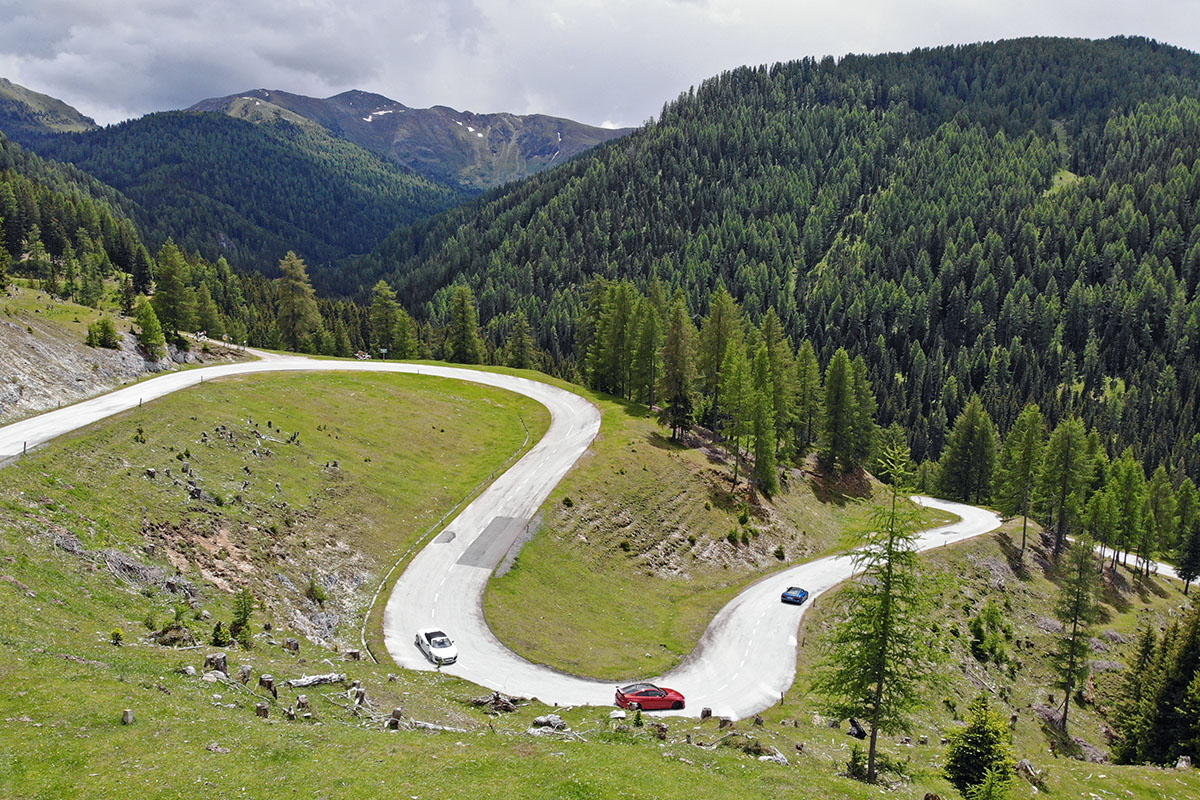 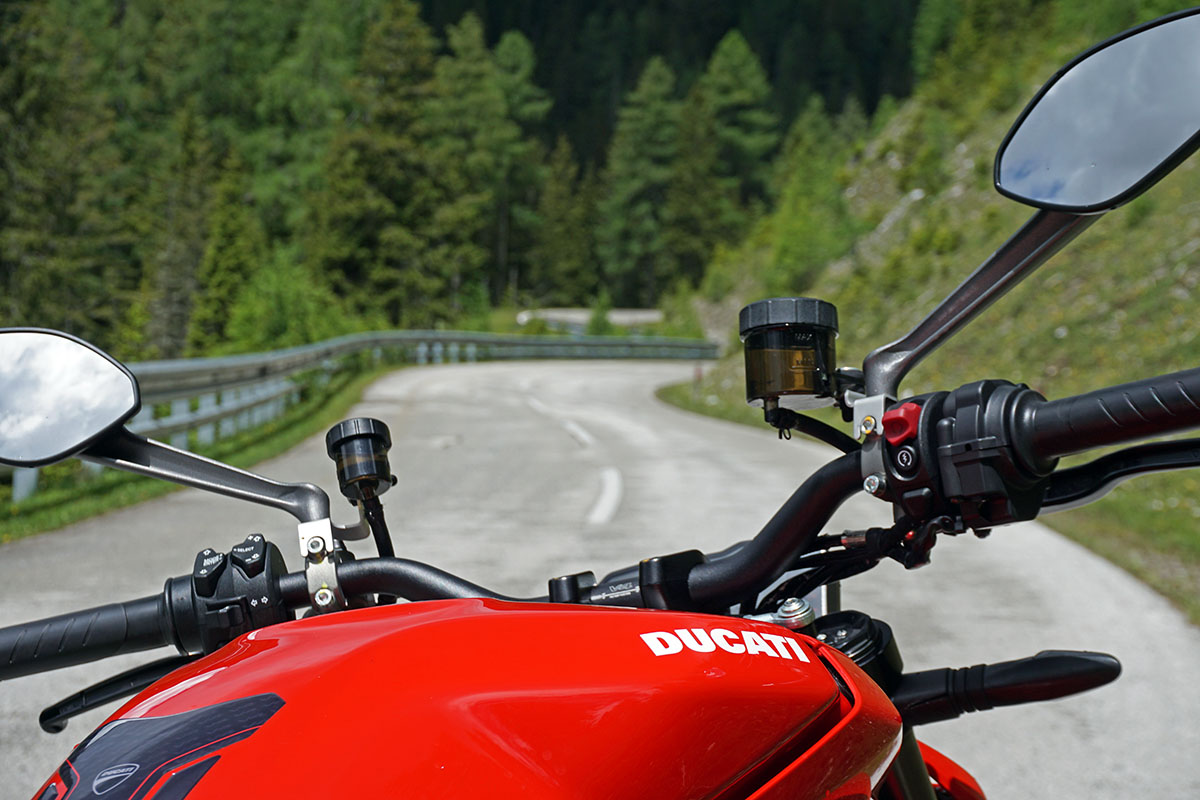 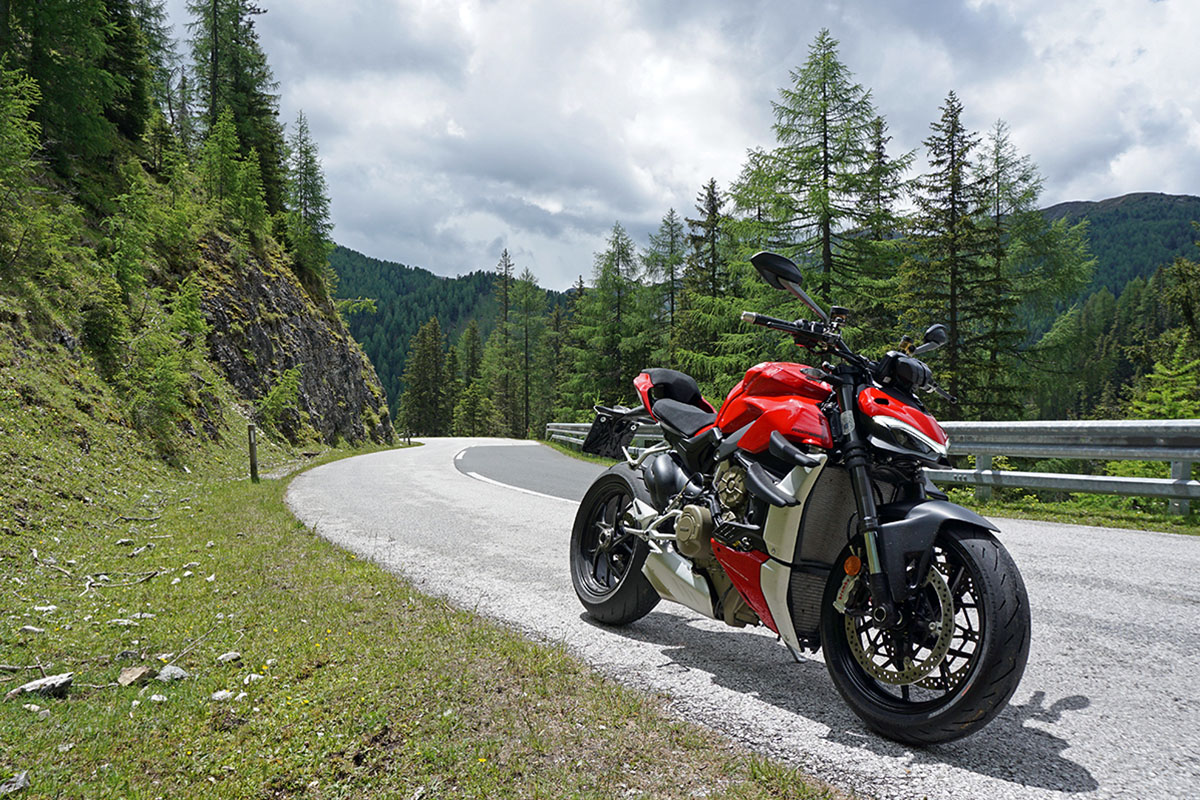 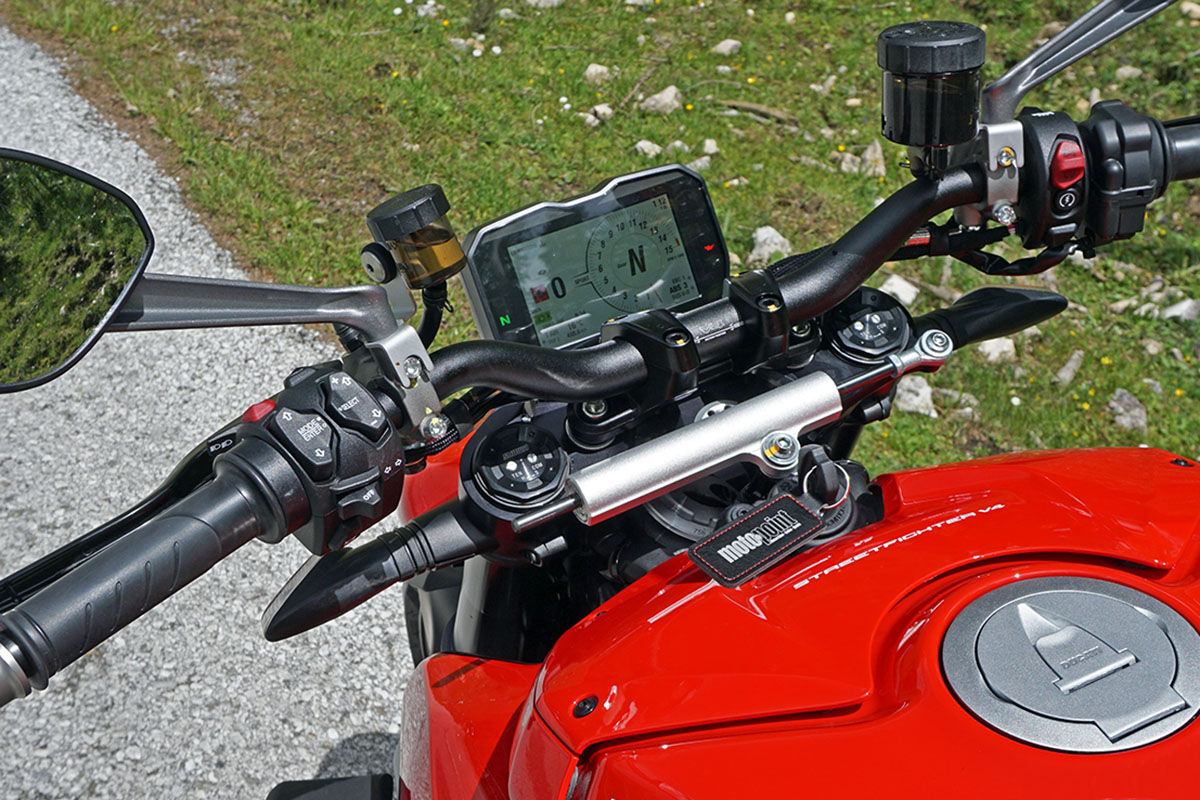 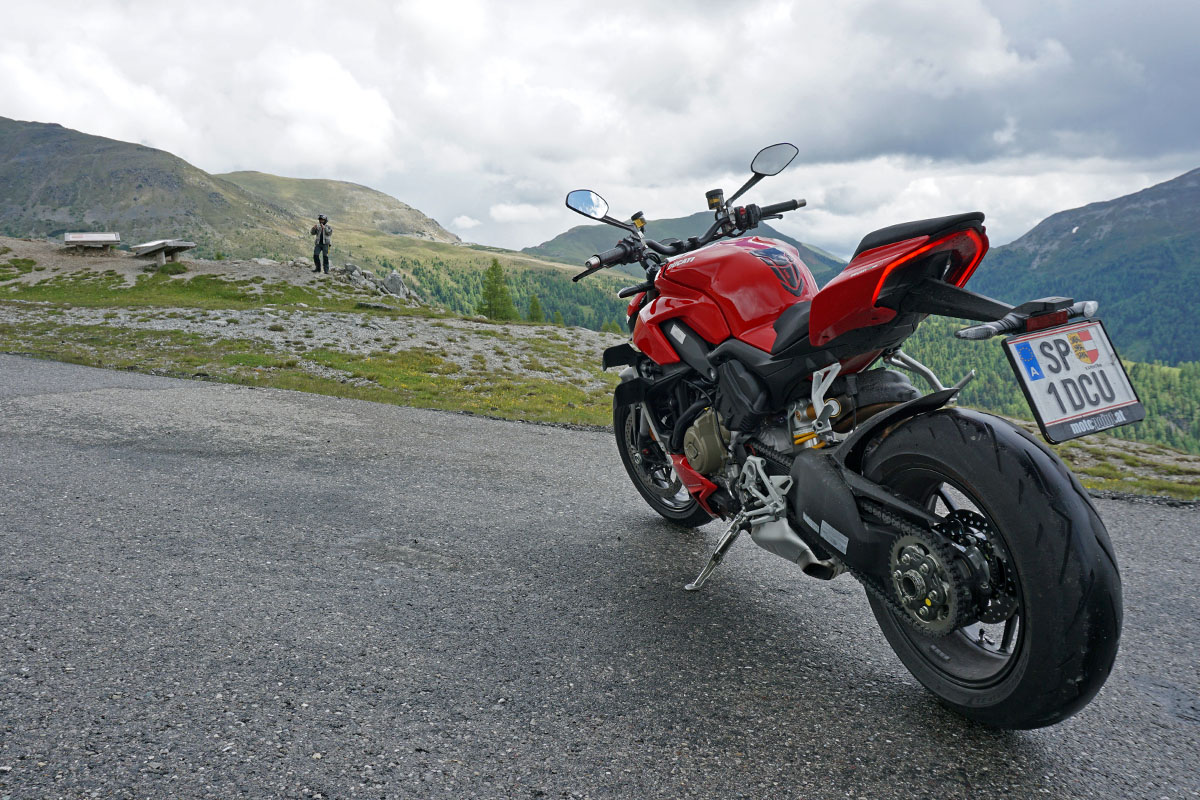 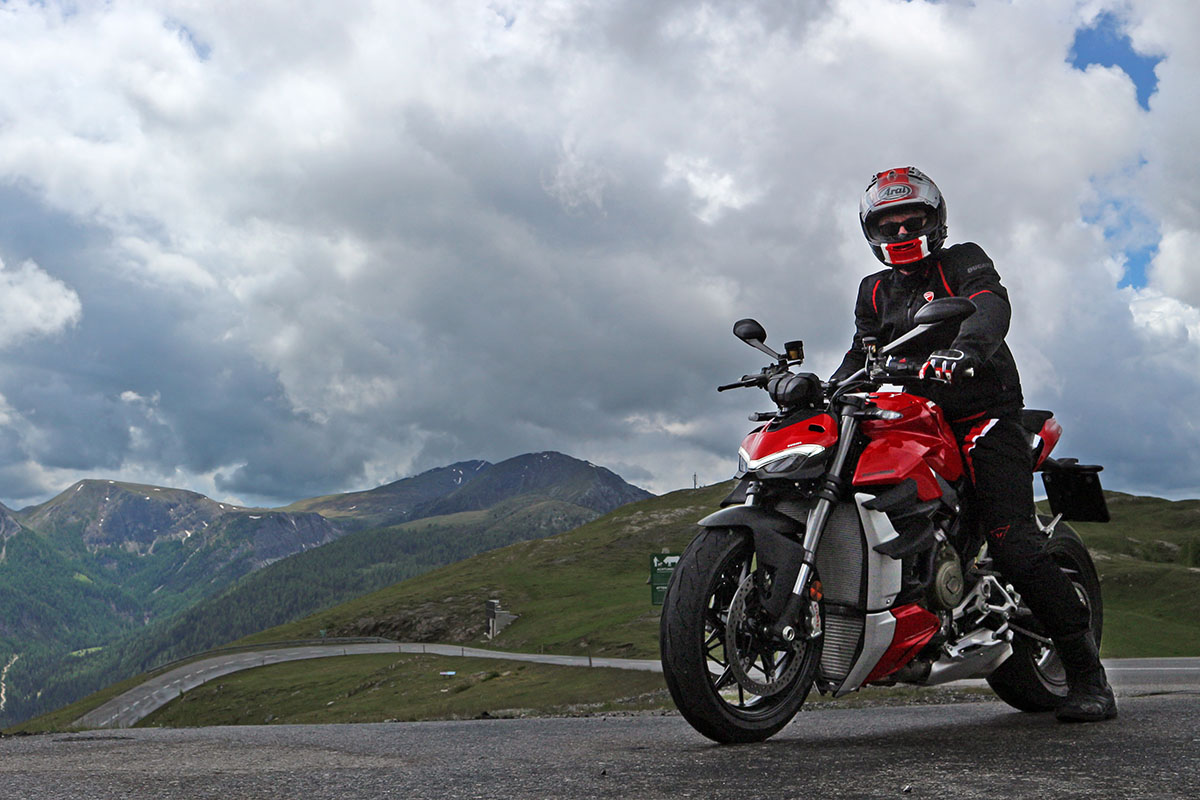 TECHNOLOGY AT ITS BEST

The Streetfighter V4 was very manageable and unexpectedly easy to ride, it steers eagerly into the corners. The Brembo Stylema brakes applied so forcefully when decelerating that at first I was somewhat surprised. At the front, two brake callipers apply pressure with four 30 mm pistons respectively on the two 330 mm brake discs, to the rear, the full hydraulic disc brake works on a 245 mm brake disc. Included is the on-board ABS Cornering EVO made by Bosch. The accompanying electronic package, of MotoGP fame, also includes everything technologically feasible at this time: Traction-, Wheelie-, Slide- and Engine Brake Control. Power Launch for lightning fast starts and Quick Shifter up/down to boot. The parameters of the assist system are already factory pre-set for three riding modes: Race, Sport and Street, it can however be individually customised as well.

From the Schiestlscharte, the Nockalm Road climbs uphill again to 1,500 m (4,921 ft) above sea level, then rising again to the highest point, Eisentalhöhe at 2,042 m (6,700 ft). Because of the threatening clouds I started off on my returning journey from there. Back at Moto-Point Granitzer I was greeted upon the conclusion of my trip by the V4’s predecessor, a Streetfighter 848, which was manufactured from 2012-2015. 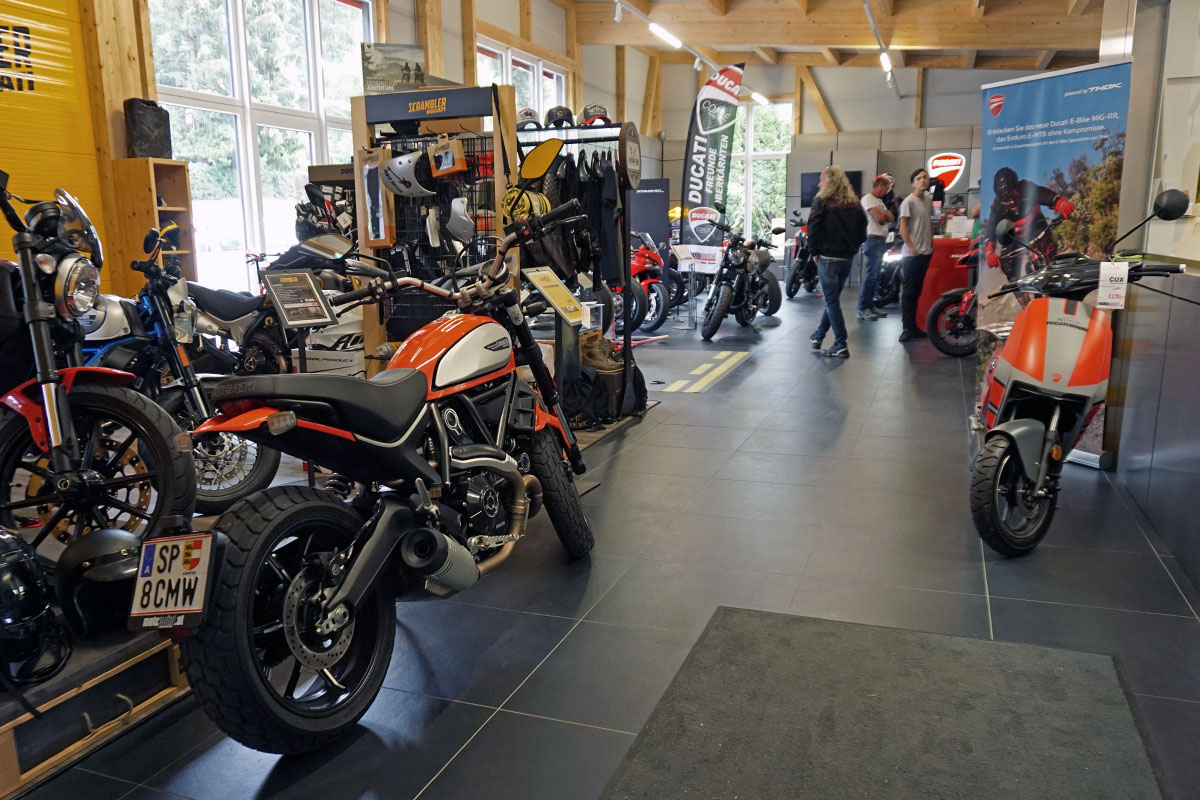 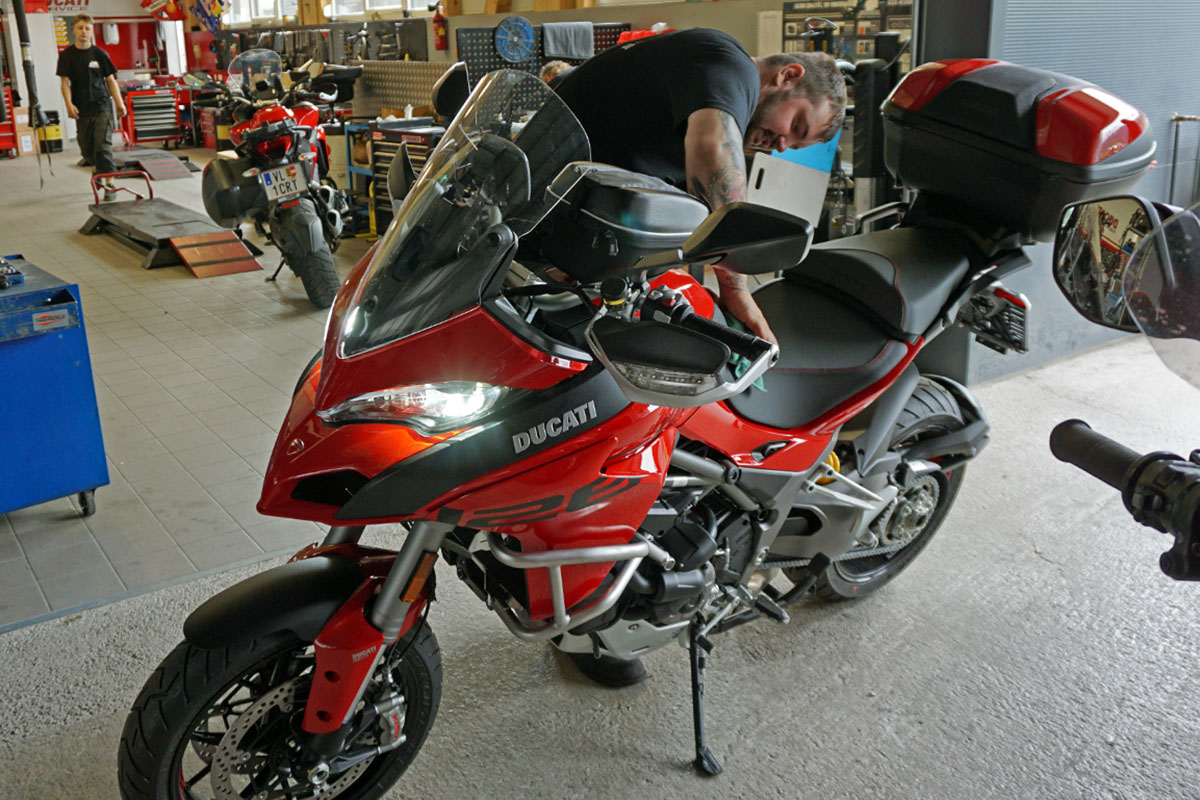 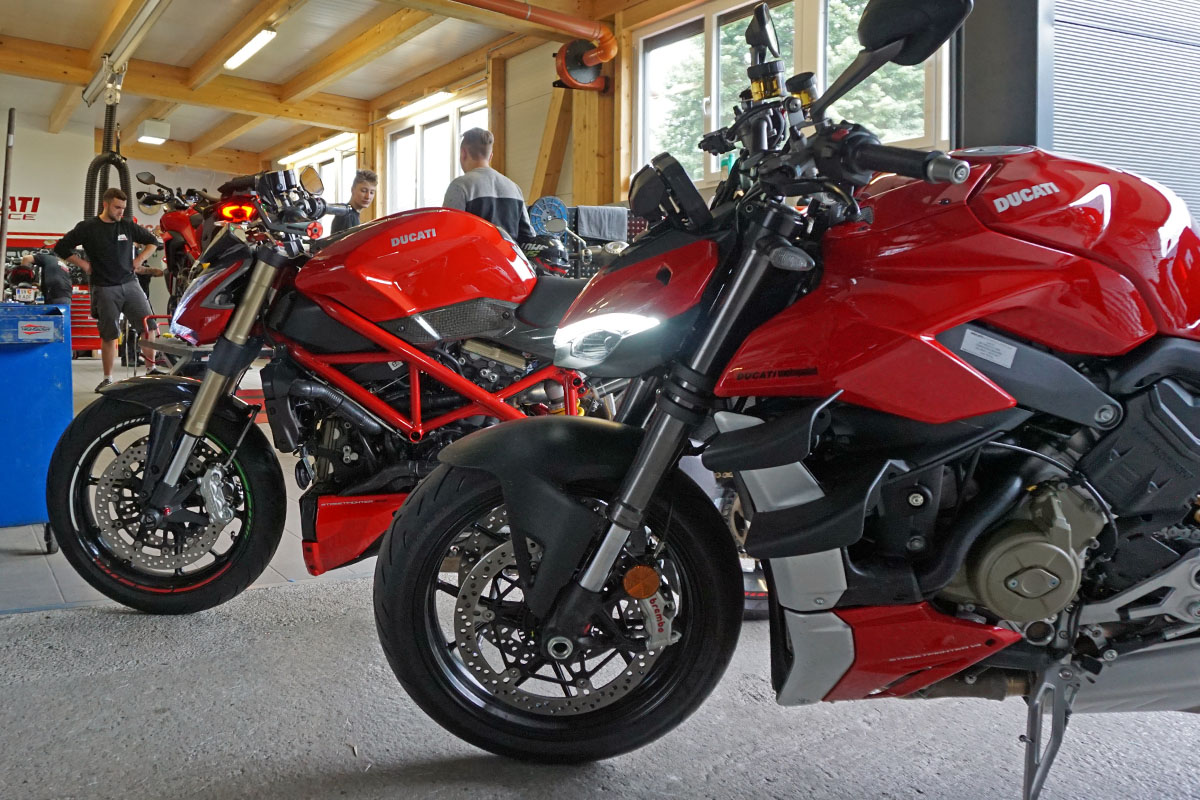 The new Ducati Streetfighter V4 is a very harmonious motorcycle. The aggressive look suits the super naked just as well as the soundtrack from the exhaust pipe, which even in low revs comes out loud and throaty. Let alone the 208 horsepower engine, which lets you see its enormous potential while still in the breaking-in phase. Obviously it begs the question, if such high performance makes sense on public roads, since it can’t begin to exploit its full potential within the legal limits. Those however who sometimes like to take to the racetrack will surely be able to fully enjoy the Panigale genes of the Streetfighter V4.