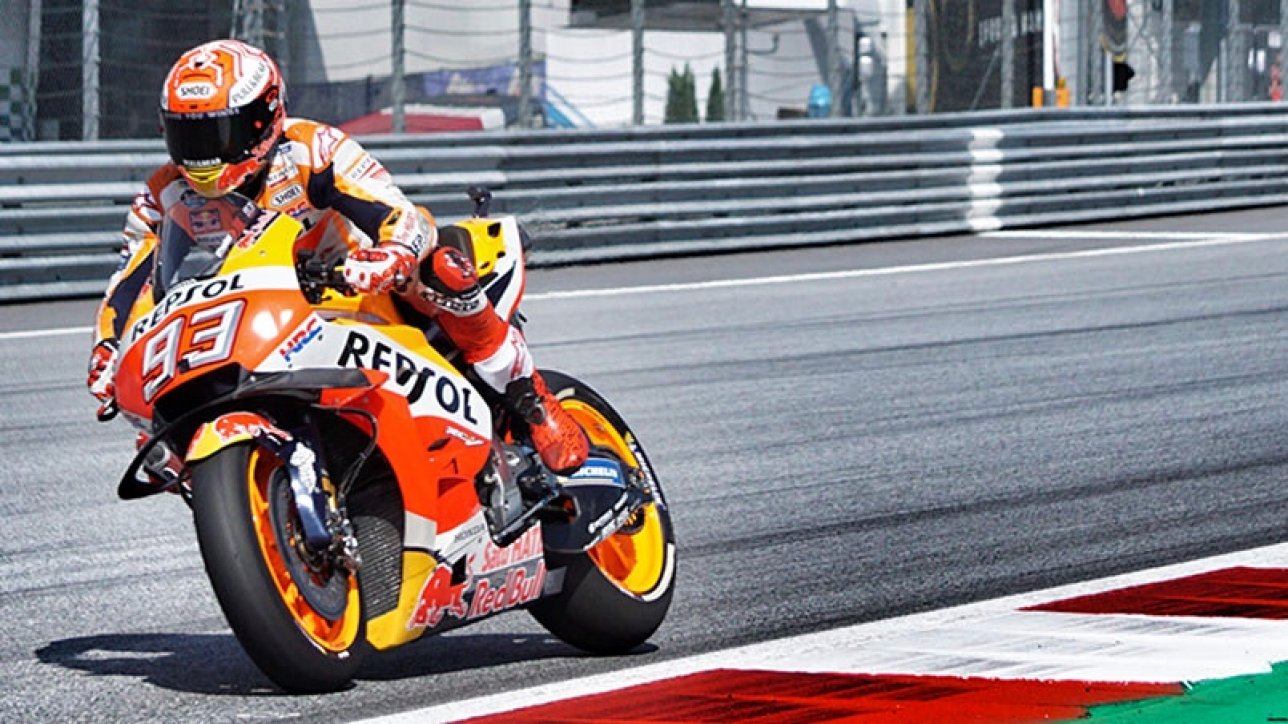 Spielberg | Red Bull ring – The wing beat of a honey bee is with 5 milliseconds not really long. Just less than half of that time Marc Márquez had advantage in the MotoGP qualifying session compared to the second placed Andrea Dovizioso today and barely won the pole position for tomorrow’s eyetime motorcycle Grand Prix of Austria…

A whole of two thousandths of a second separated the two at the moment probably toughest adversaries in MotoGP. Andrea Dovizioso by the Ducati team came here as the winner of the last race in Brno and last year’s winner in Spielberg. Marc Márquez, second placed in the last year, is still missing the first victory in Spielberg. Therefore he is the big challenger of Andrea tomorrow.

The weather had improved in time, after it had rained yesterday in the Free Practice (FP) 3 and today in the morning. Almost as ordered, the clouds lifted just after lunch and at 13:30 the FP 4 could start in dry conditions. Marc Márquez won this clearly on tires already used in previous sessions, being ahead of Jorge Lorenzo (+ 0.218) and Andrea Dovizioso (+ 0.307). 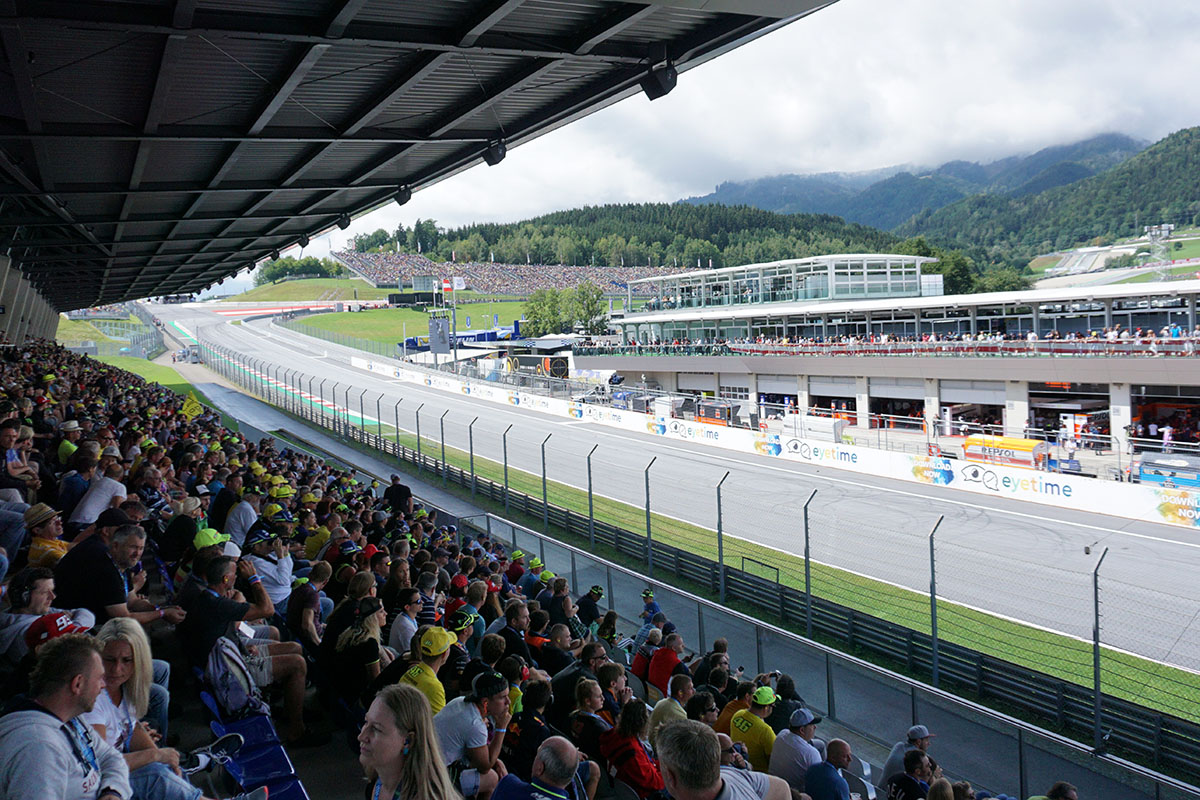 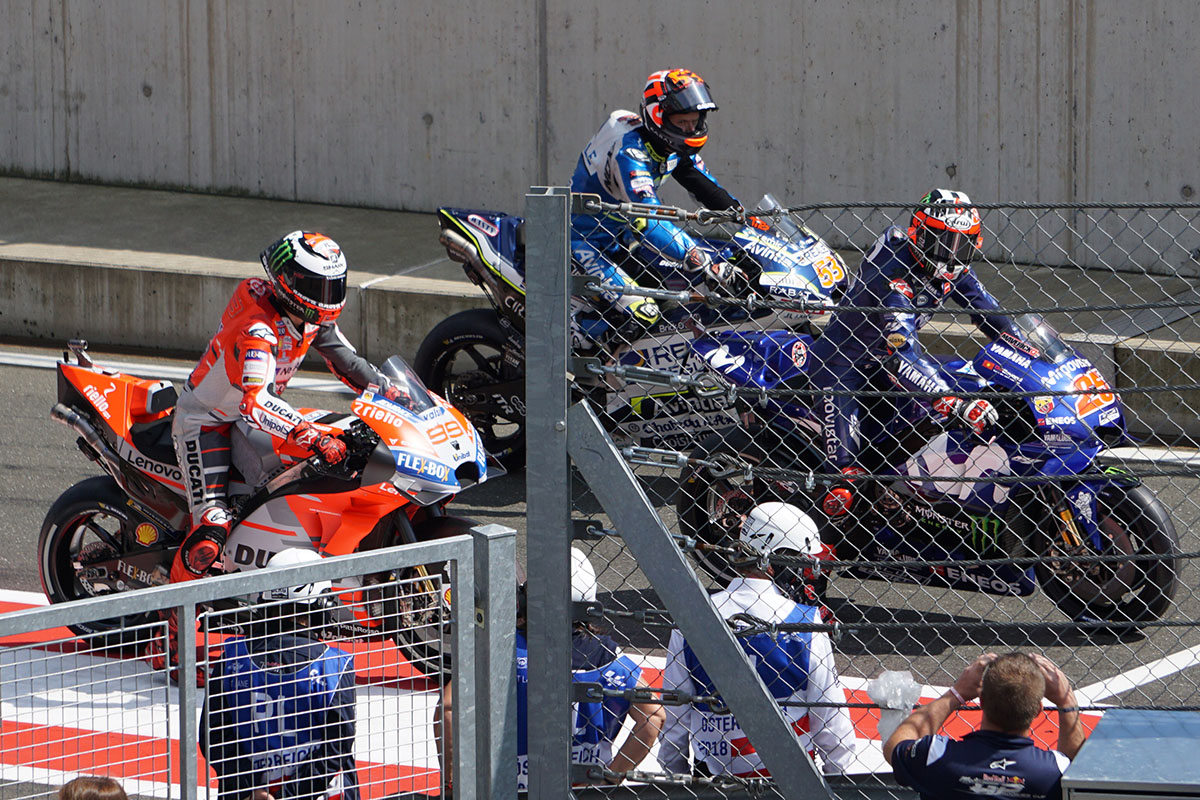 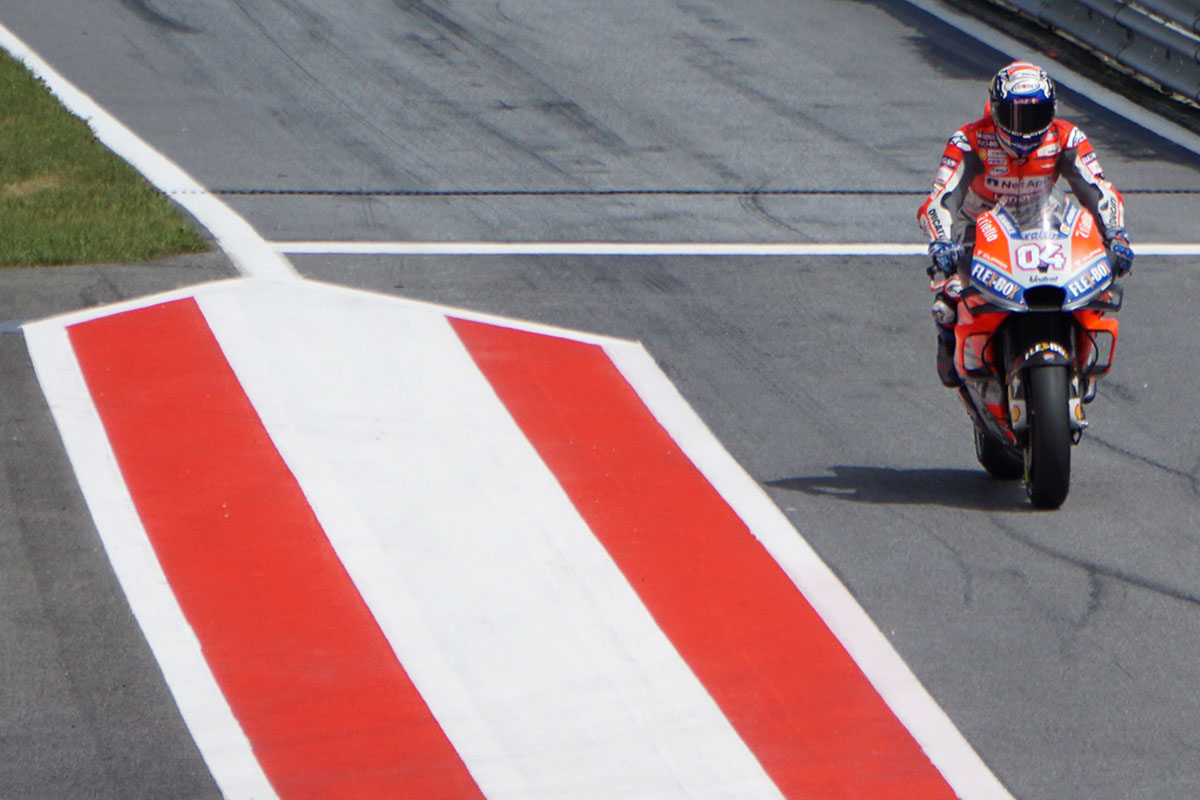 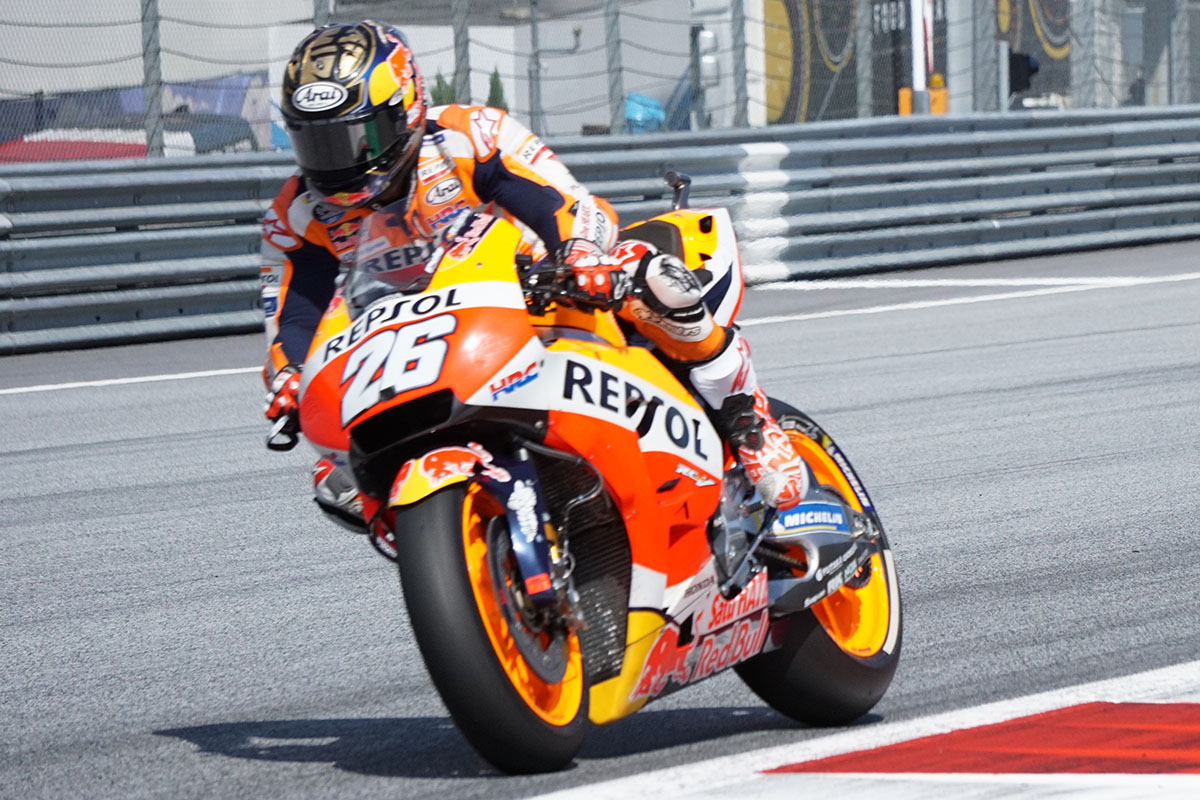 Jorge Lorenzo by the Ducati team reached the third place in qualifying (+ 0.135), which meant a starting position from the first row. Danilo Petrucci, his successor in the next year in the Ducati factory team, positioned himself just behind him (+ 0.262), and once again claimed to be the best driver of a private team. Bradly Smith, the due to injurie last remaining rider in the Red Bull KTM Factory Racing Team, continued his ascending form with a 13th place. Thus, a much sought-after top 10 position is certainly feasible for Mattighofener tomorrow.

For Valentino Rossi fans things went less good, being the largest fan group by far here at the Red Bull Ring. Among them is also Kurt Wogowitsch, once himself an international racing driver and still successful on the race tracks with his Ducati, and a whole group of friends, which if anything, could cope just hardly with the 14th place of the Doctor. 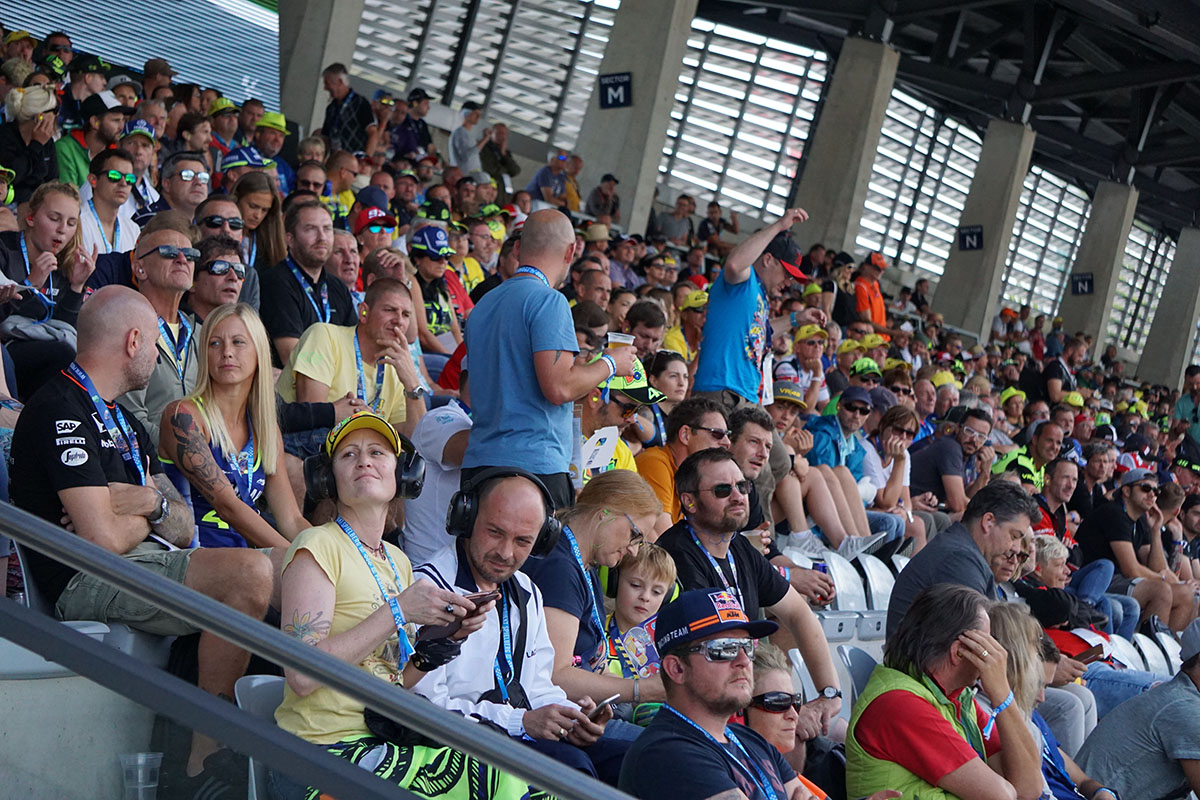 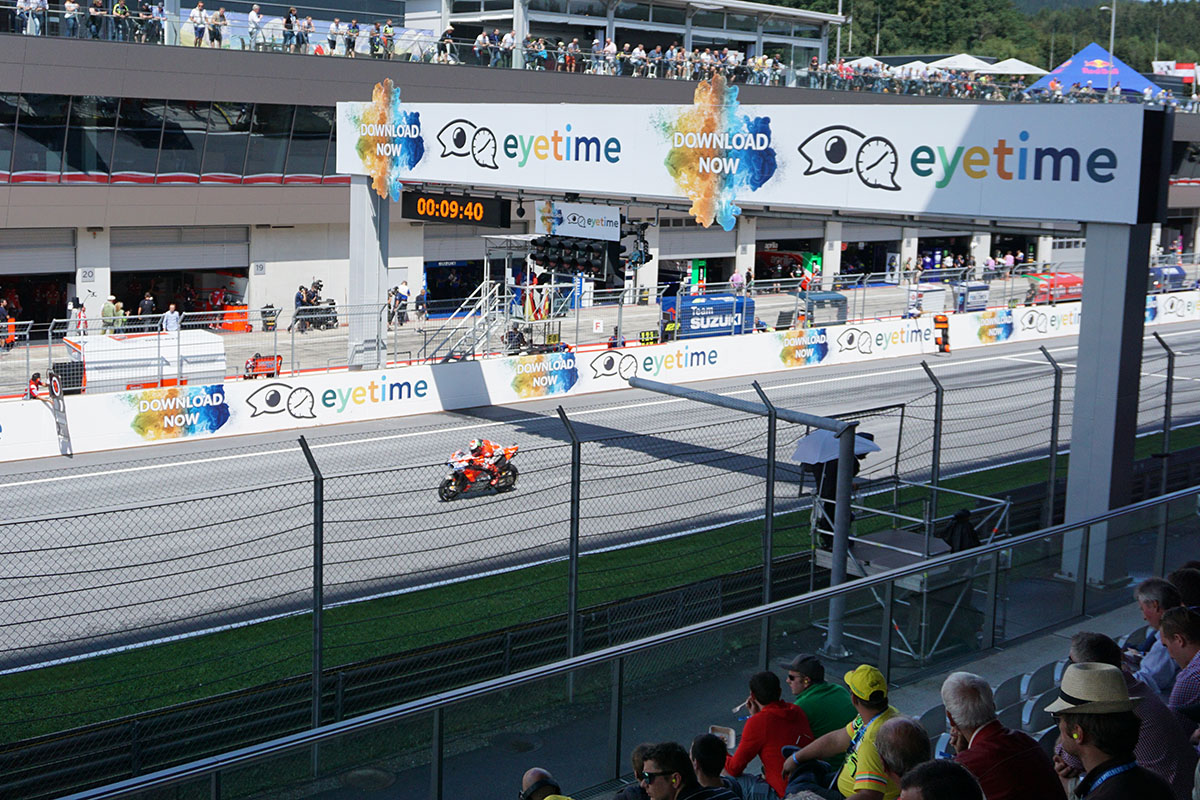 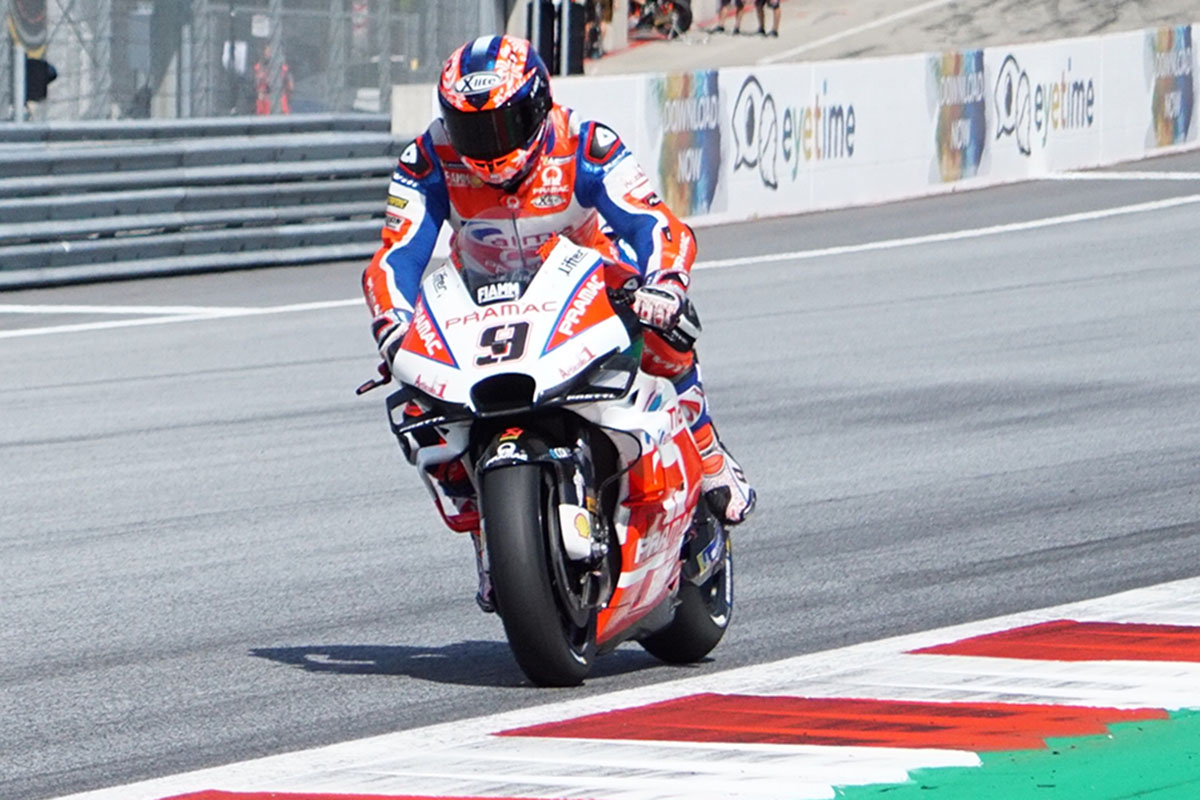 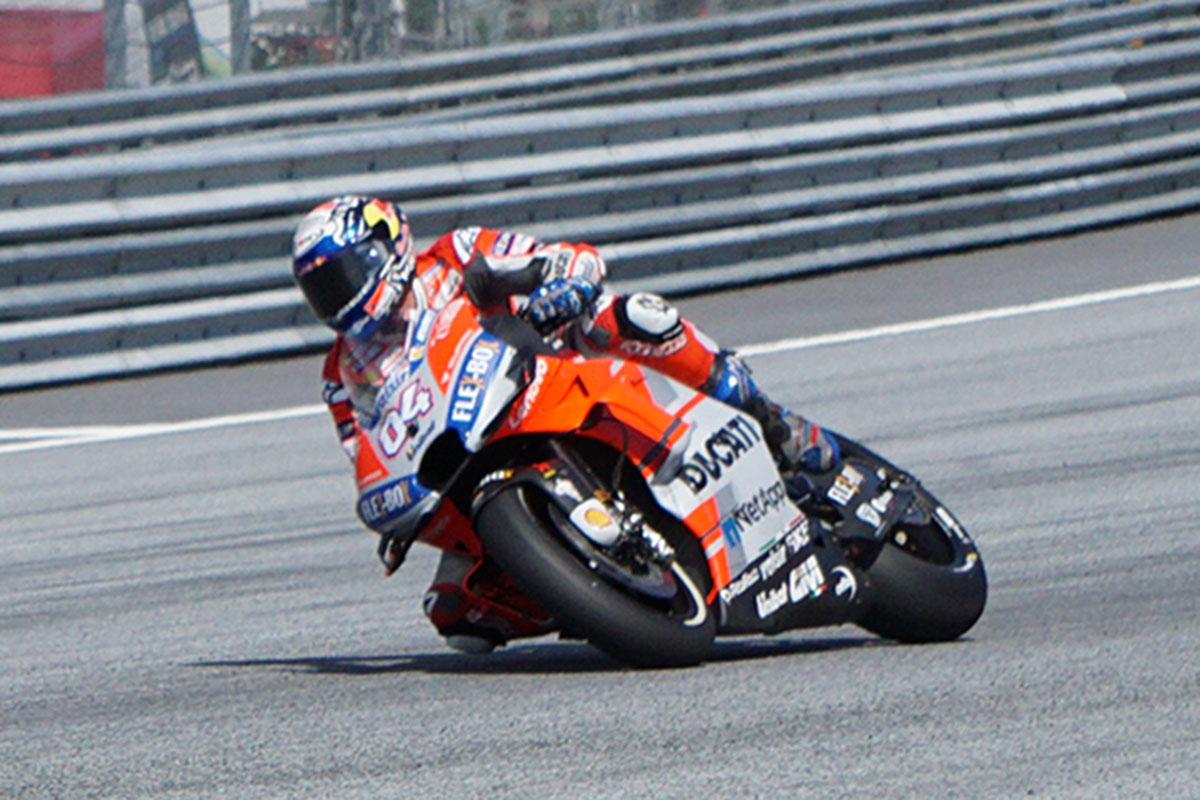 In the subsequent press conference, Marc Márquez said he sees himself in a similar situation as in the previous year. He is aiming for the long-awaited victory at the Grand Prix of Austria, while also thinking about the World Cup. He is leading with a comfortable 70 points on both Ducati riders and said, it would be better to score than to risk a failure by a reckless maneuver. For Andrea Dovizioso the tire issue is the biggest question mark. He sees himself ready to fight for the victory, but everything could happen and for such a long race it’s it is important to care for the tires and fuel. For Jorge Lorenzo, already before the qualifying it was clear that Ducati will fight for the pole position, a misunderstanding in the box on the tire choice could have prevented the pole position for him.

On my question, where Andrea had “found” the three tenths of a second over the Free Practice 4 to Marc, Dovi replied he supposes that the grip on the track was worse after the rain and only with continuous training and the associated rubber abrasion again became better. Marc commented that Ducati is very strong with the new tires like in the qualifying and he was very happy with the pole. Also he was only a tenth of a second under the lap record and only drove a few kilometers on a dry track. The lap record is 1’23.142 min and was set up 2016 by Andrea Iannone on Ducati. 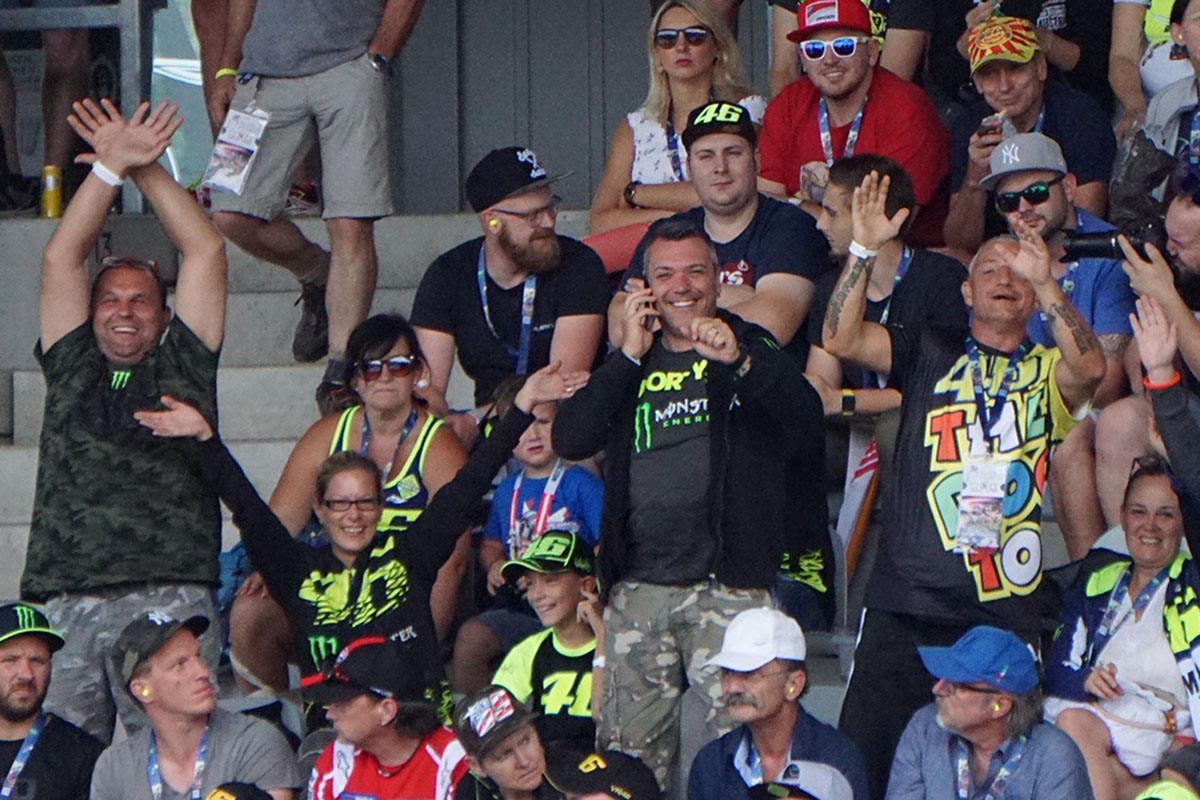 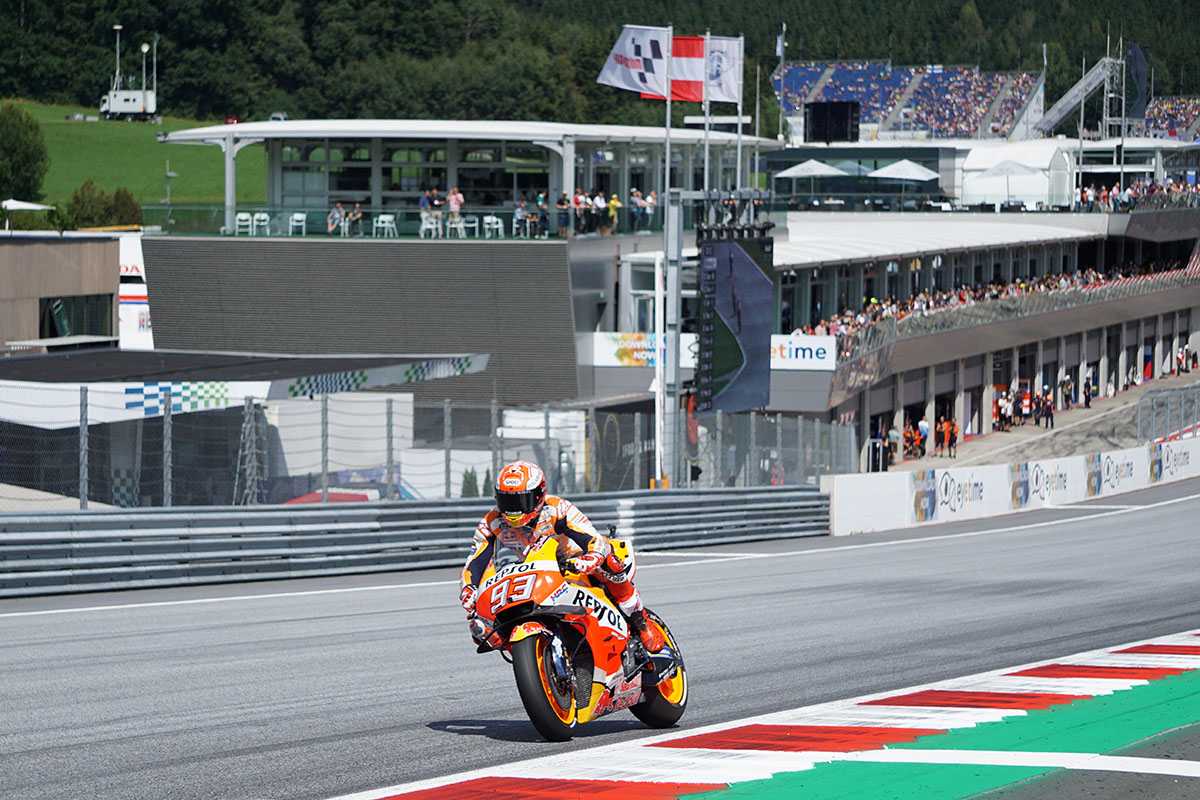 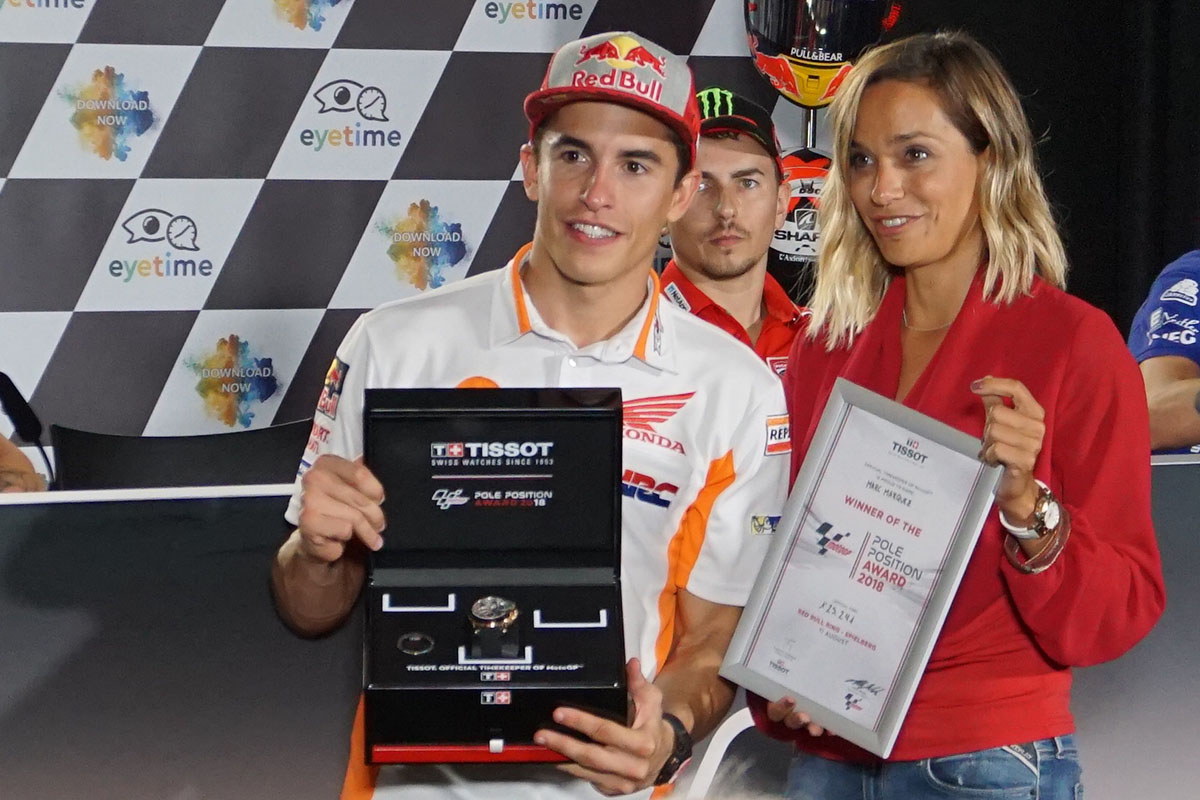 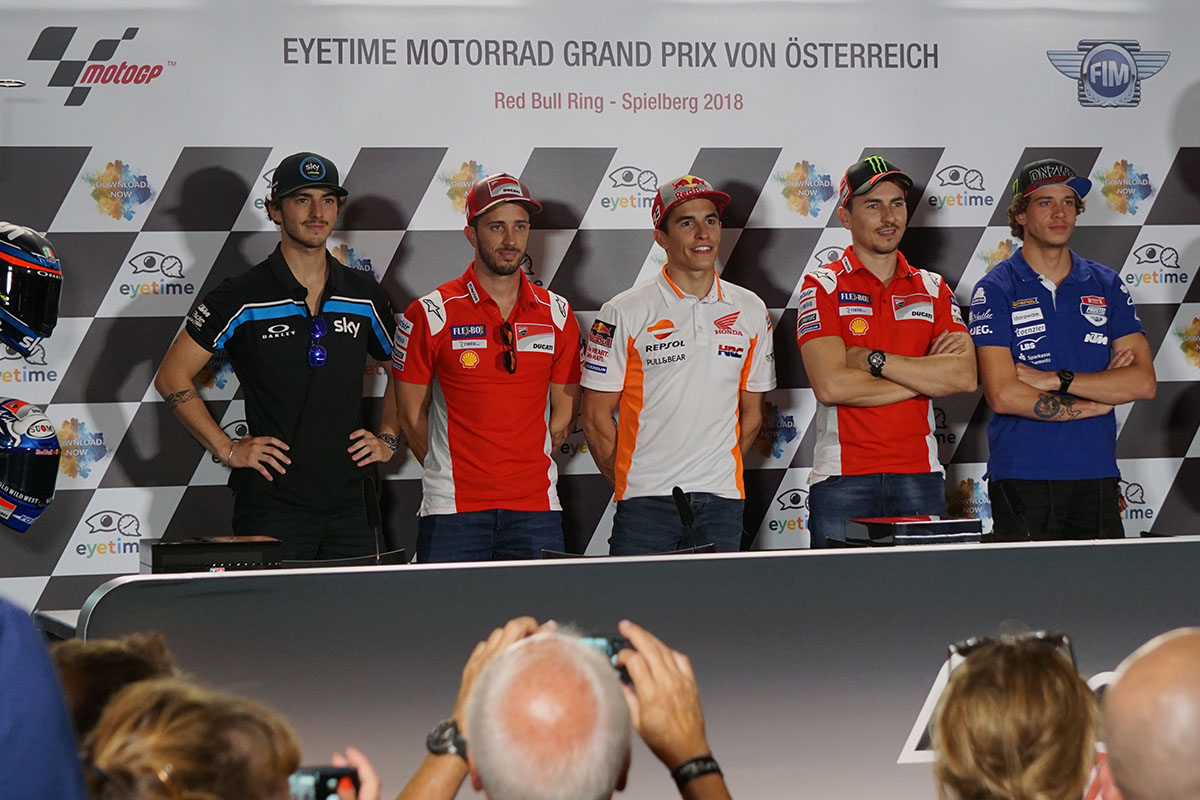 An exciting race awaits us tomorrow, in which the two Ducati by Andrea and Jorge and Marc and his Honda certainly battle again neatly. It will be also interesting how Danilo by Alma Pramac Racing and other riders will keep up the pace from the first row. The weather forecast is good, so here we go. See you tomorrow!