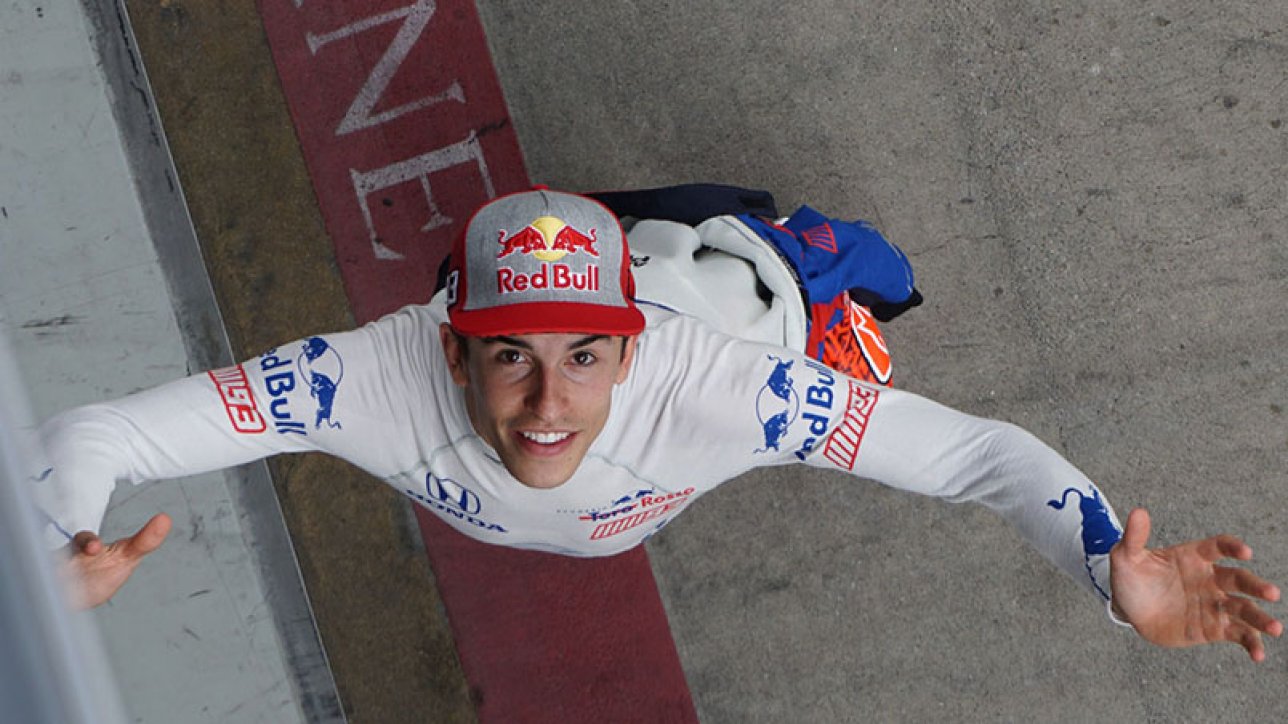 Red Bull Ring | Spielberg – In very unusual terrain has ventured the currently probably the fastest MotoGP rider and thus fulfilled a long-awaited dream. Upon the invitation of Red Bull Racing, Marc Márquez got the chance to test a Formula 1 racing car for the first time and to show off his skills on four wheels…

My joy was huge, when I learned that I will meet this extraordinary personality already before the MotoGP race in August in Spielberg. Just returning from motorcycle tests and tours from Catalonia and Sardinia on Sunday, I received from the Project Spielberg a short-term accreditation to this extraordinary event.

On Monday evening, I got myself in the mood for the event with tv show ‘Sport und Talk’ on Servus TV. Marc Márquez was a guest and reported on the preparations for his formula 1 debut. Tuesday morning I started just like the protagonist off to the event on two wheels towards Spielberg. Strong storm threat let me pack my rain gear in my backpack. After a short, brisk drive from Vienna via the S6 I arrived at noon the Red Bull ring in Spielberg. 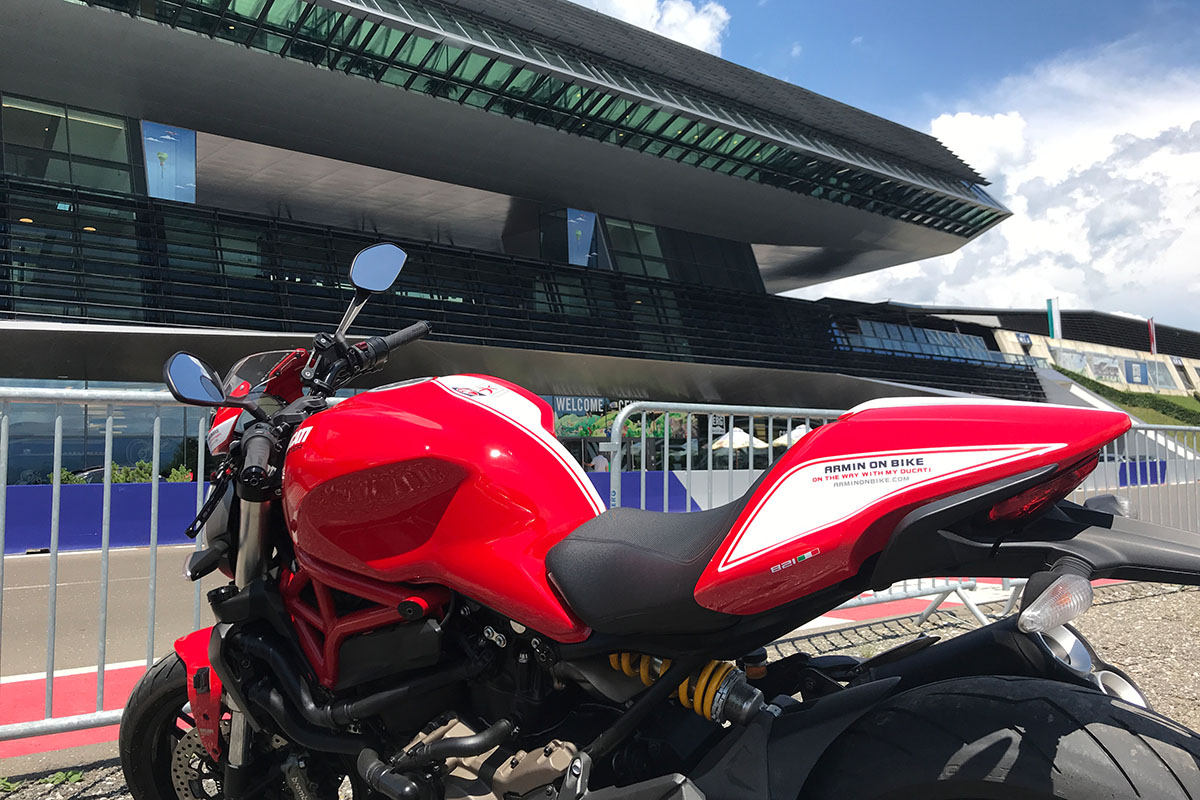 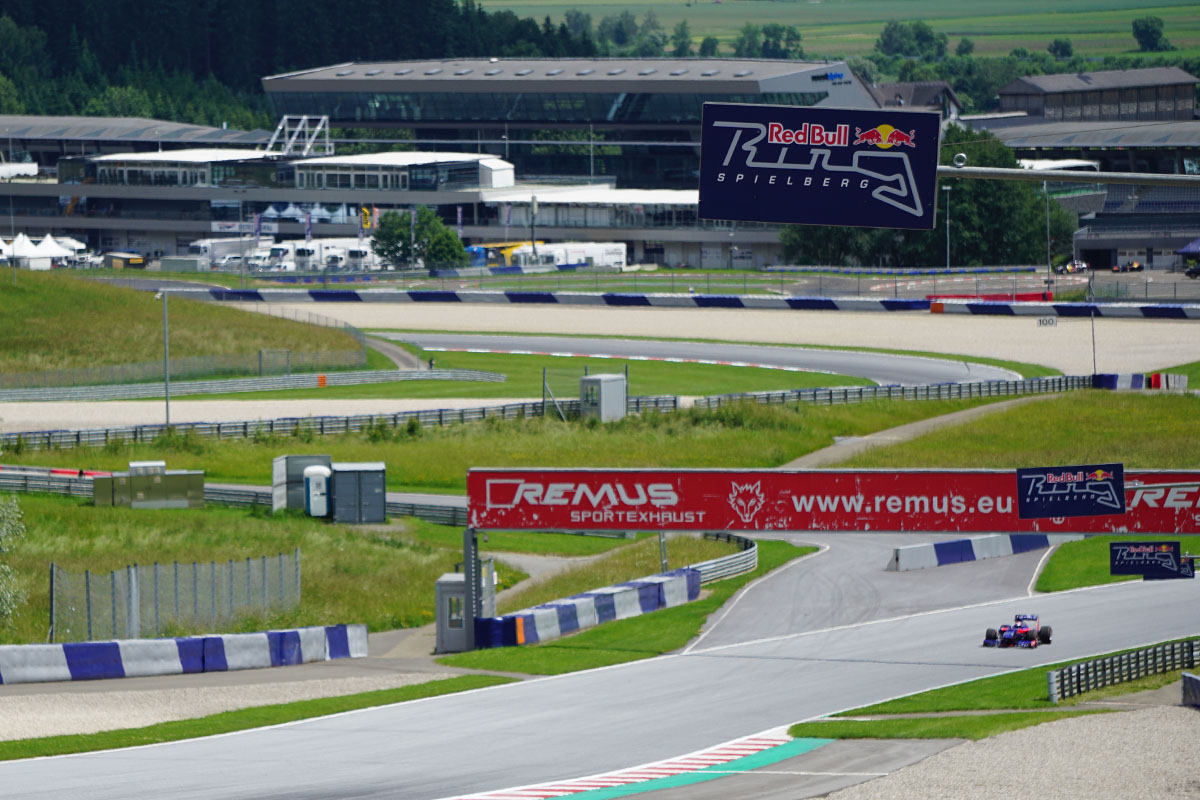 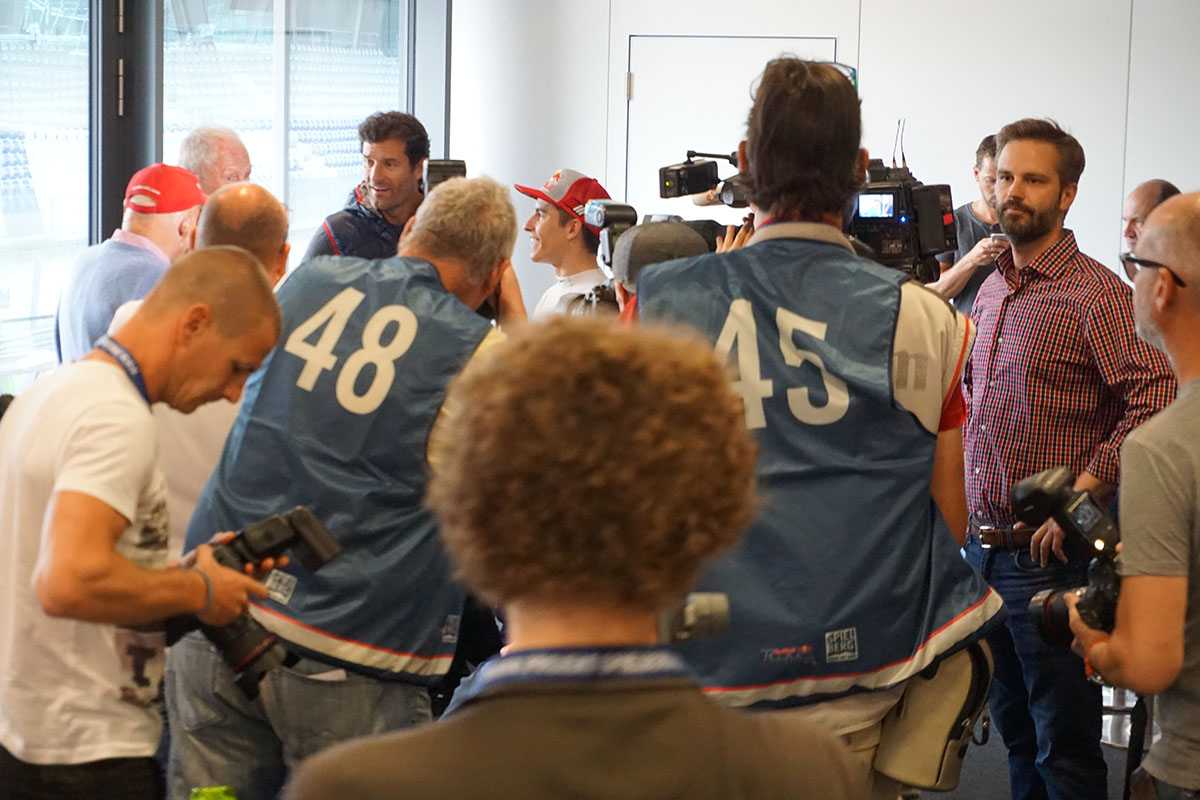 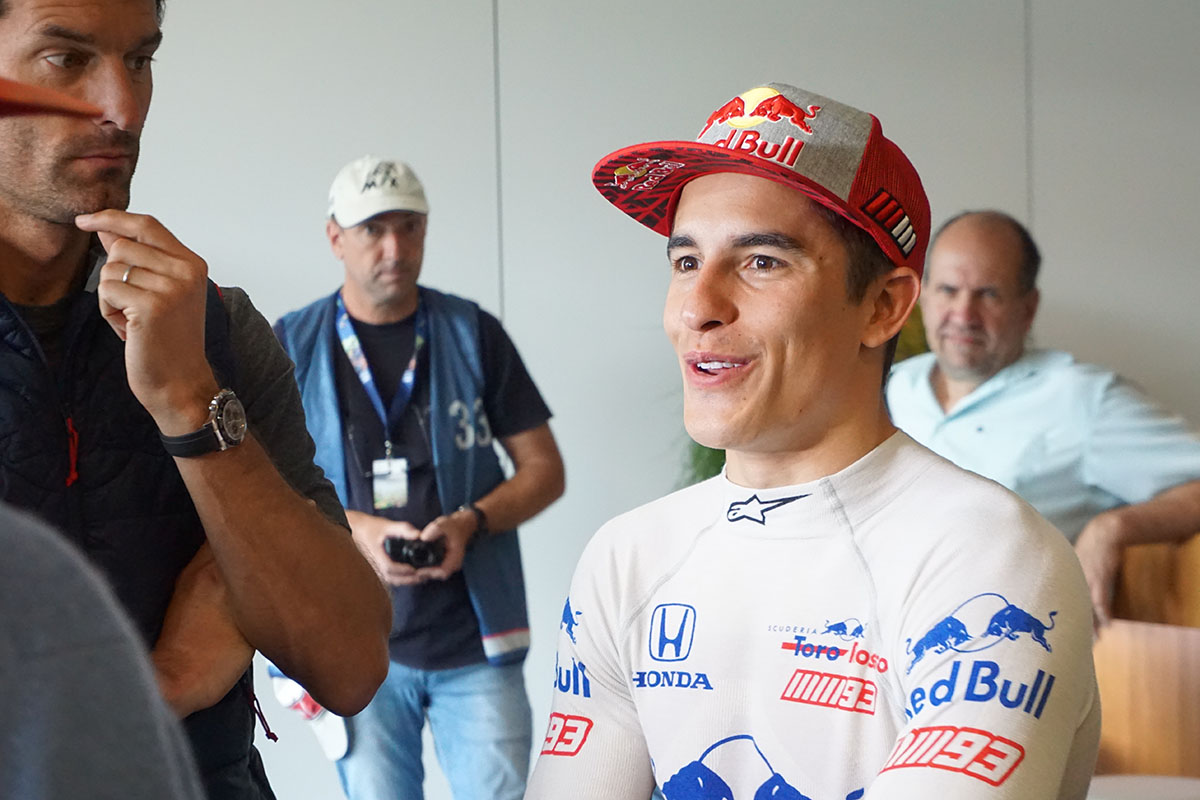 Loud motor noises of the Renault V8 from the RB8 by Red Bull Racing, the formula 1 car of 2014, I greeted at the site. The car comes from a time when the sound of F1 cars were able to conjure up even goosebumps. As I still had to register, change and claim my photo vest, I was right back in a hurry, before I could close up to the action. My operations were hardly plannable, as it was not fixed, when Marc Márquez would go on the track. There was not a specific timetable, as everything was dependent on the current test conditions, which could change every minute.

The beaming of Marc was obvious. This showed that the current MotoGP championship leader does not only feel comfortable on his Honda RC213V but also can get used to other fast vehicles quickly. When asked his first impression when upgrading in the F1 car was, he said, the unusual point of view and the position had been. He felt like strapped down in a box and saw only the top edge of the two wheels. Also the much later braking points and the high cornering speeds had been unusual at the beginning and impressive at the same time. 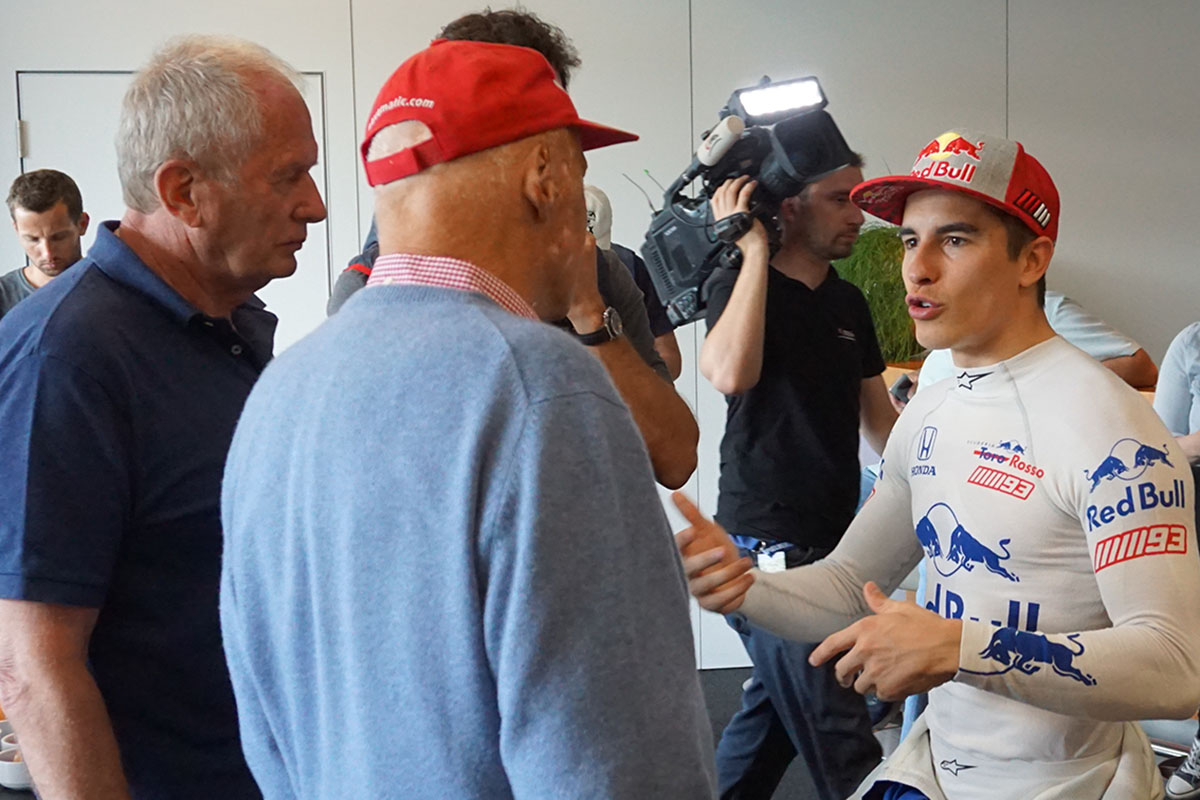 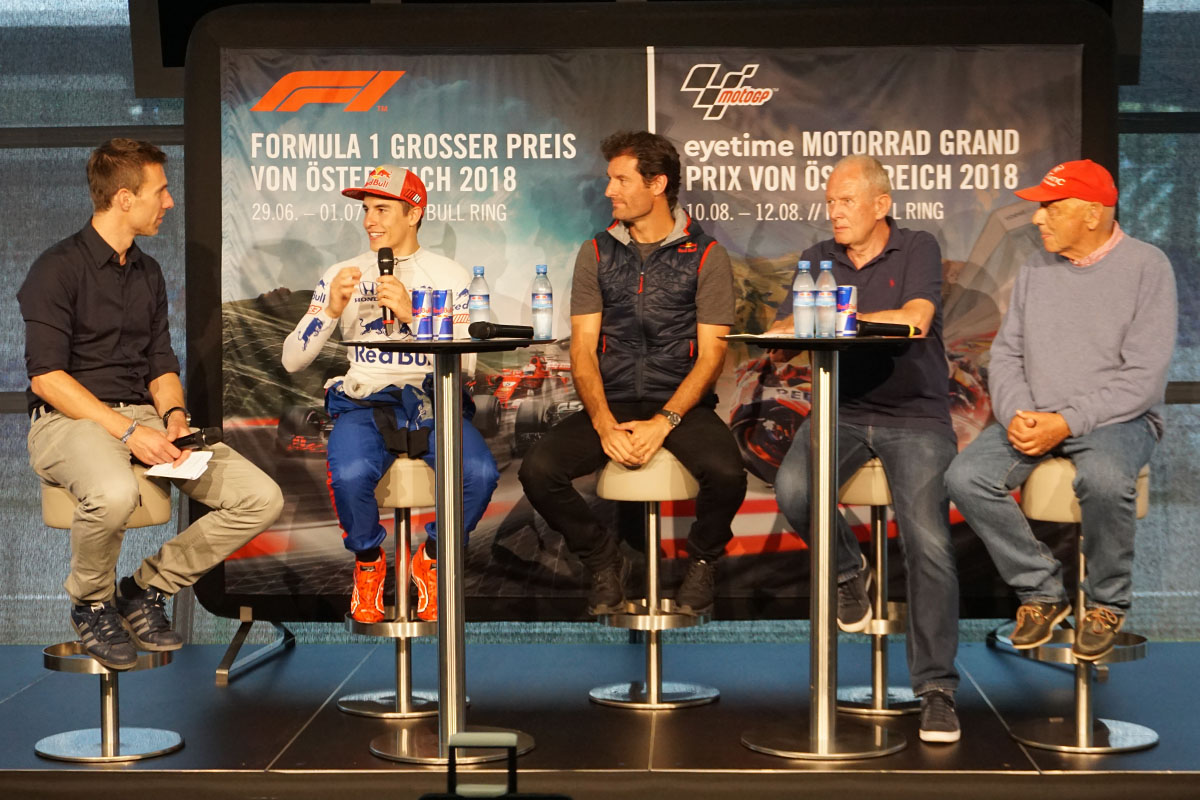 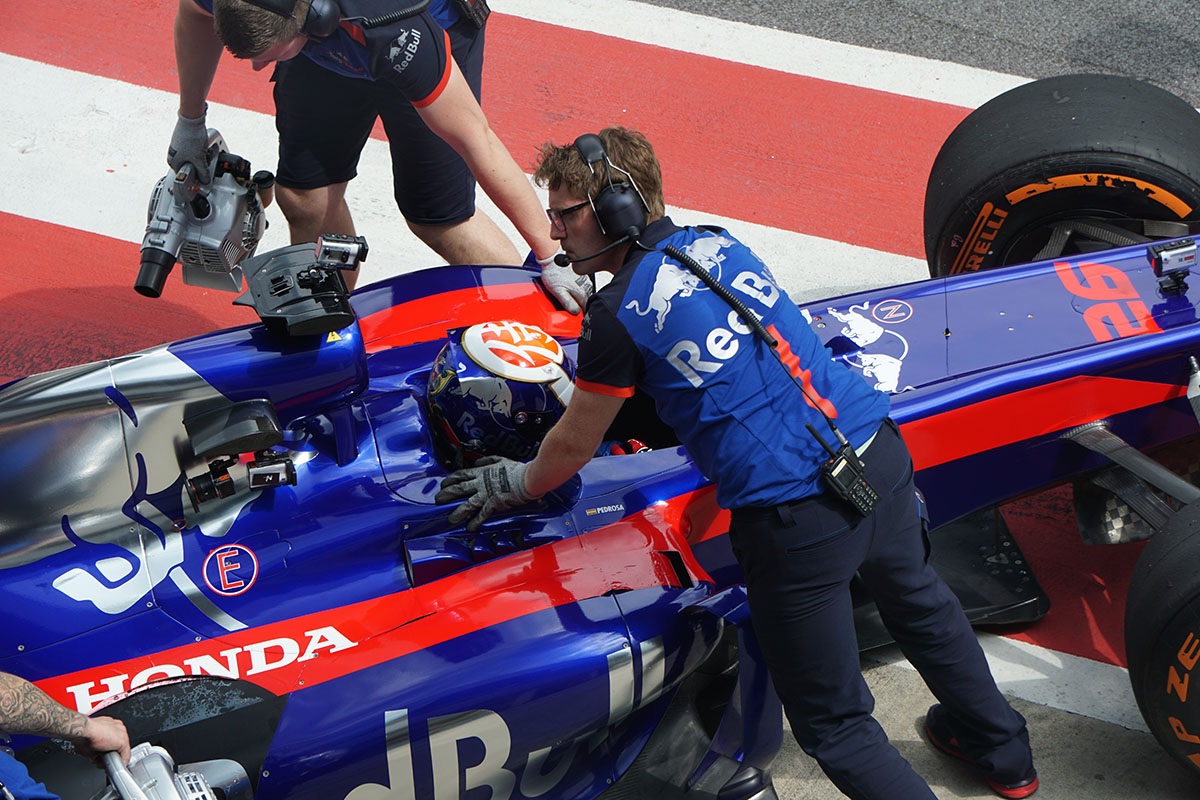 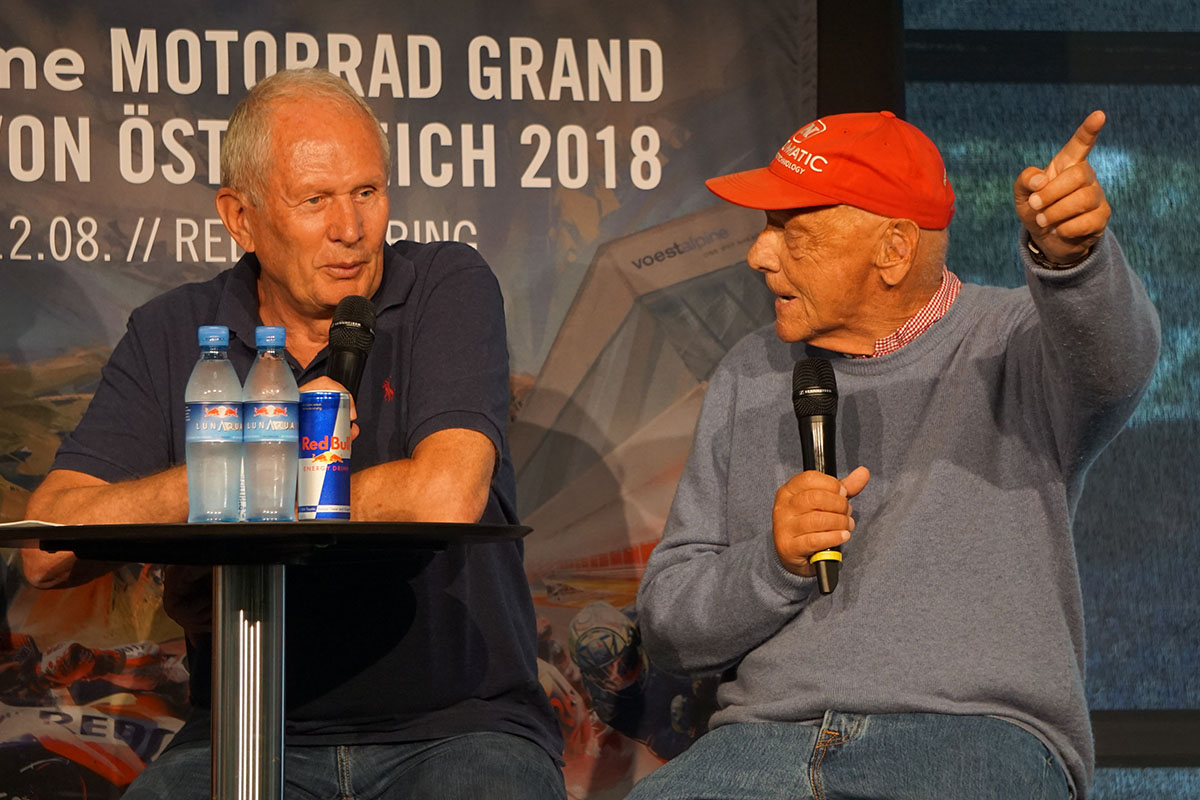 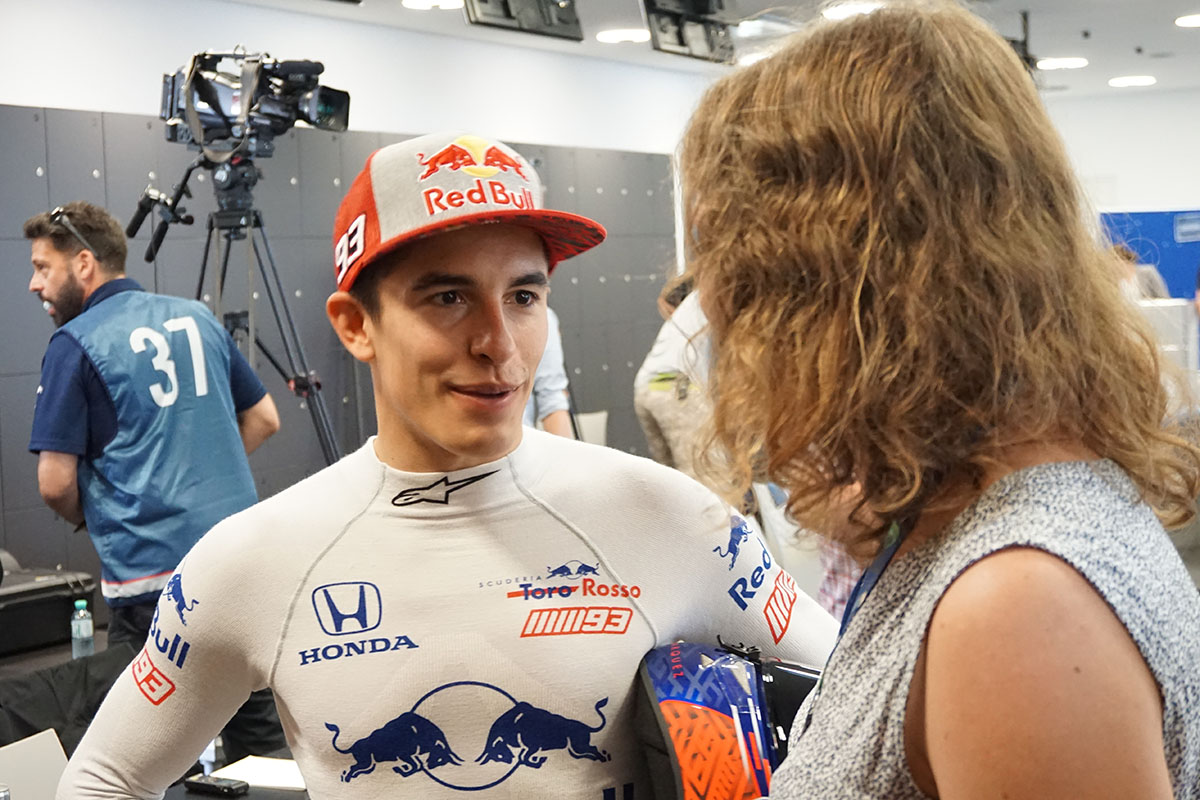 At the media talk in front of the assembled crowd of numerous European motorsport journalists, also the former F1 driver Marc Webber was present besides Marc Márquez, as a consultant and as a race engineer standing next to him. On the previous day, an elaborate seat adjustment and before that also a simulator training in the Red Bull Racing headquarters in the British Milton Keynes took place. The more prominent cast of the press conference included the Red Bull Racing team consultant Dr. Helmut Marko and our three times Formula 1 world champion and current Chairman of the Board at the Formula 1 team Mercedes-AMG Petronas Motorsport Niki Lauda, being an avowed fan of Marc Márquez, who flew in from Vienna just for this occasion.

Marc was able to reduce the lap times from 1:20 in his RB8 from 2012, with a Renault V8 760 hp vacuum motor, step by step to a very good time of 1:13. As since this year Honda is the engine supplier for Toro Rosso, the car’s design was preset. Honda Motorsport Director Masahi Yamamoto, who had agreed to the test in advance, was also present on this day in Spielberg. You could see Marc’s motivation, which was shown by a twister in the last curve at early noon, as wanted to build speed for an even faster next round.

The experts such as Dr. Helmut Marko were impressed by his performance in the first test of a Formula 1 car. Marko mentioned in the discussion with a grin, that Red Bull would have a free cockpit from 2021 on. Marc even said that the day was an unforgettable experience, but nevertheless the 25 year old could not imagine a shift to Formula 1 at the moment. He’s still young and who knows what time brings. His decision for two wheels had fallen in the earliest childhood and was also the right thing. How true this is, shows his extraordinary success in motorcycle racing. 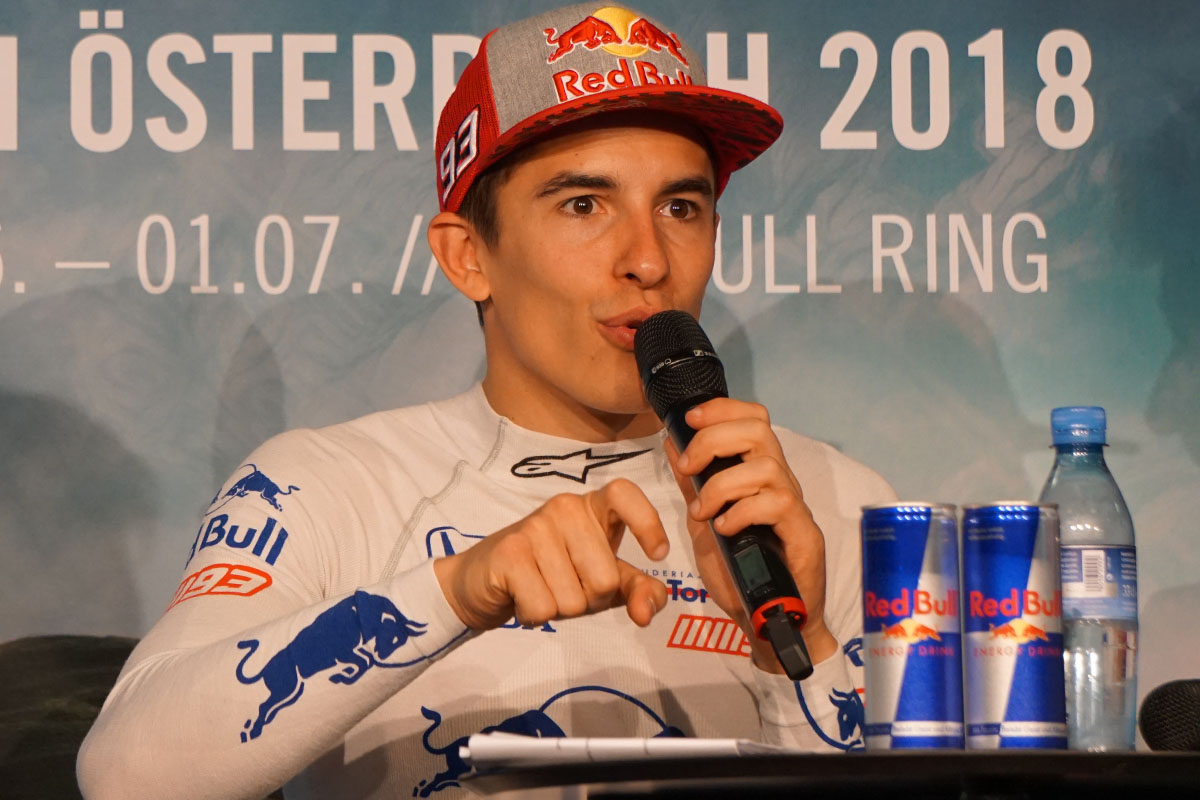 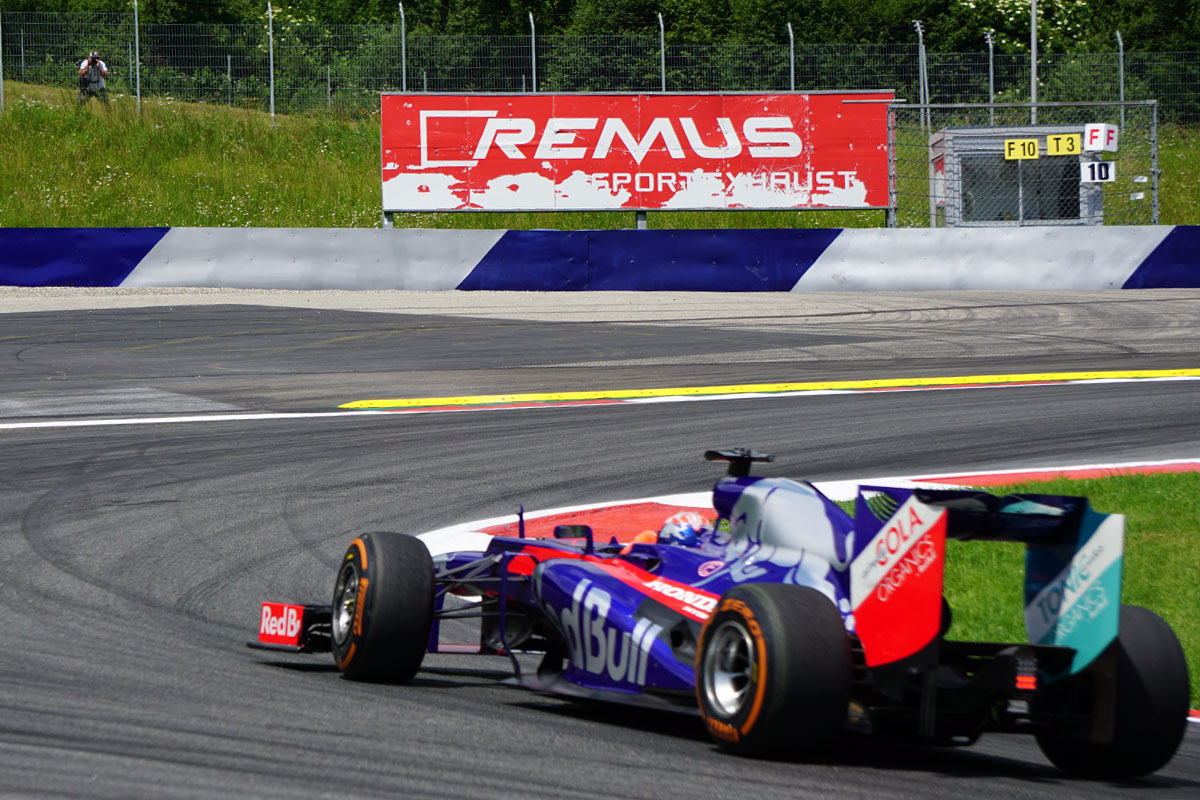 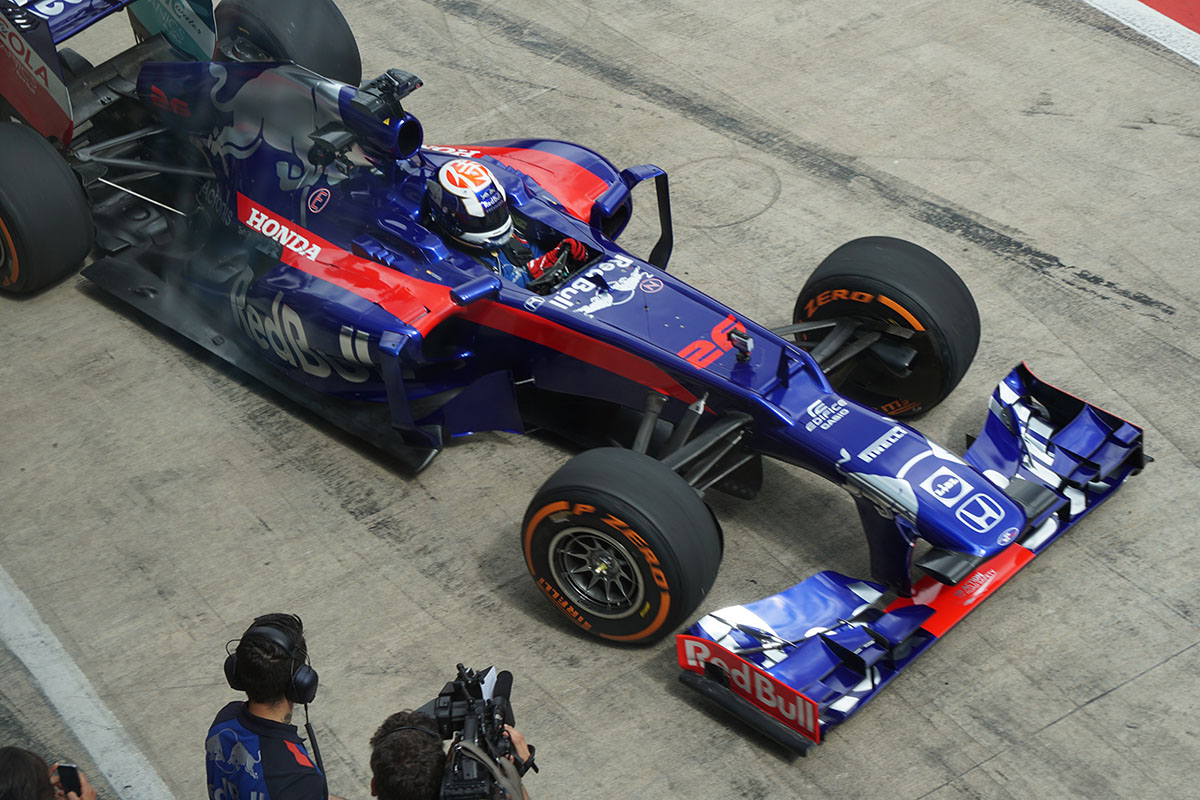 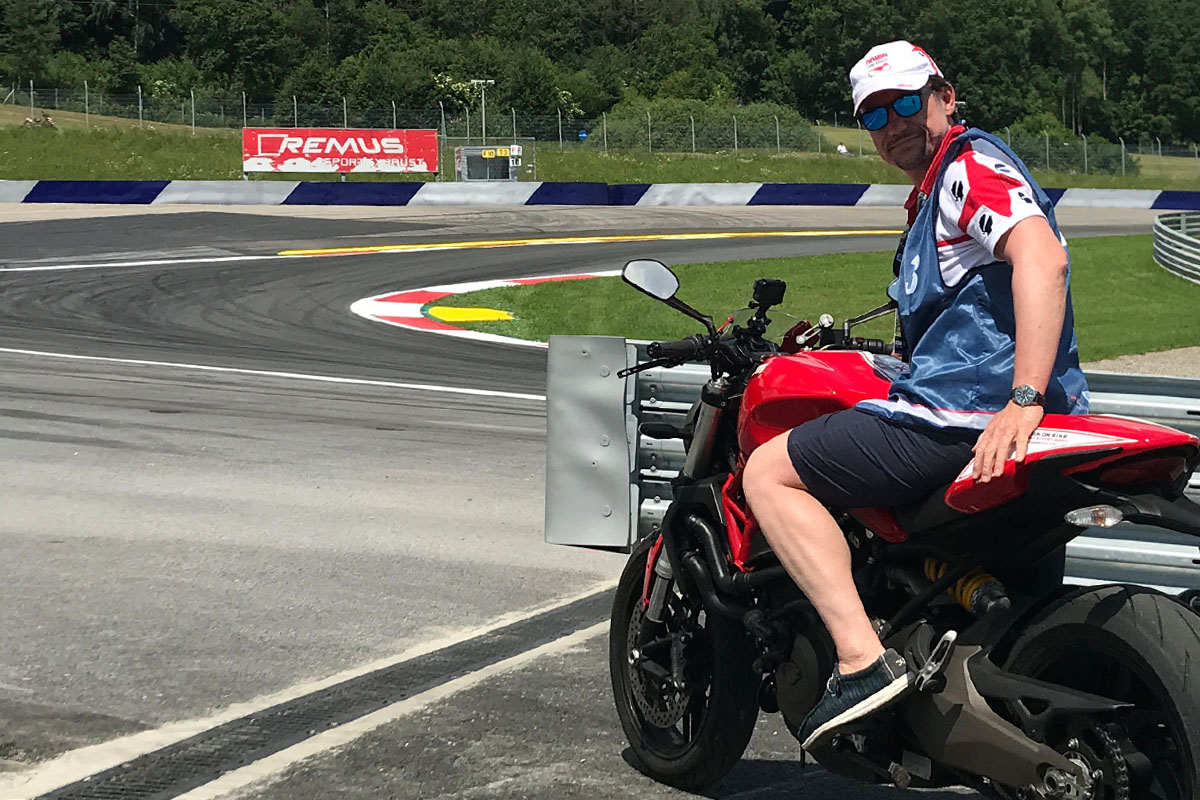 After the introductory phase Marc felt well in the car, also due to the wide run-off areas at the Red Bull Ring. But he could not imagine a test in Monaco at the moment. My question, whether it is also conceivable that the MotoGP could be held in cities, just like in the Formula 1, he explained, that this was completely impossible for safety reasons. The atmosphere was very good and lose at the media talk. The interesting discussion was enriched by the one or the other joke by Niki Lauda with Dr. Helmut Marko or also anecdotes from his active career.

After lunch set off with my bike to the track, to make photos and videos. Dressed in a photo vest, it was no problem getting onto the track. A network of paths with tunnels allows the best spots along the Red Bull Ring to seek out. First I was at the Remus curve and there was an interesting conversation with a Marshal post. Then it was on to the next, to the Rauch curve, there, but only once, the RB8 manned by Marc Márquez in the Toro Rosso design came behind a camera car from Red Bull. My hope that Marc would once again come at full speed past in the following video, didn’t fullfill unfortunately.

As a result of the strong rain, the test drives already ended at 3 pm. Hundreds of spectators lined the grandstands during the day and were thrilled by the action. Tomorrow, Dani Pedrosa, teammate of Marc Márquez and Tony Cairoli, the nine times Motocross world champion, will also join the Formula 1 test drives at the Red Bull Ring. After the rain had stopped, I was again back on the way to Vienna, to tell you about this impressive event.