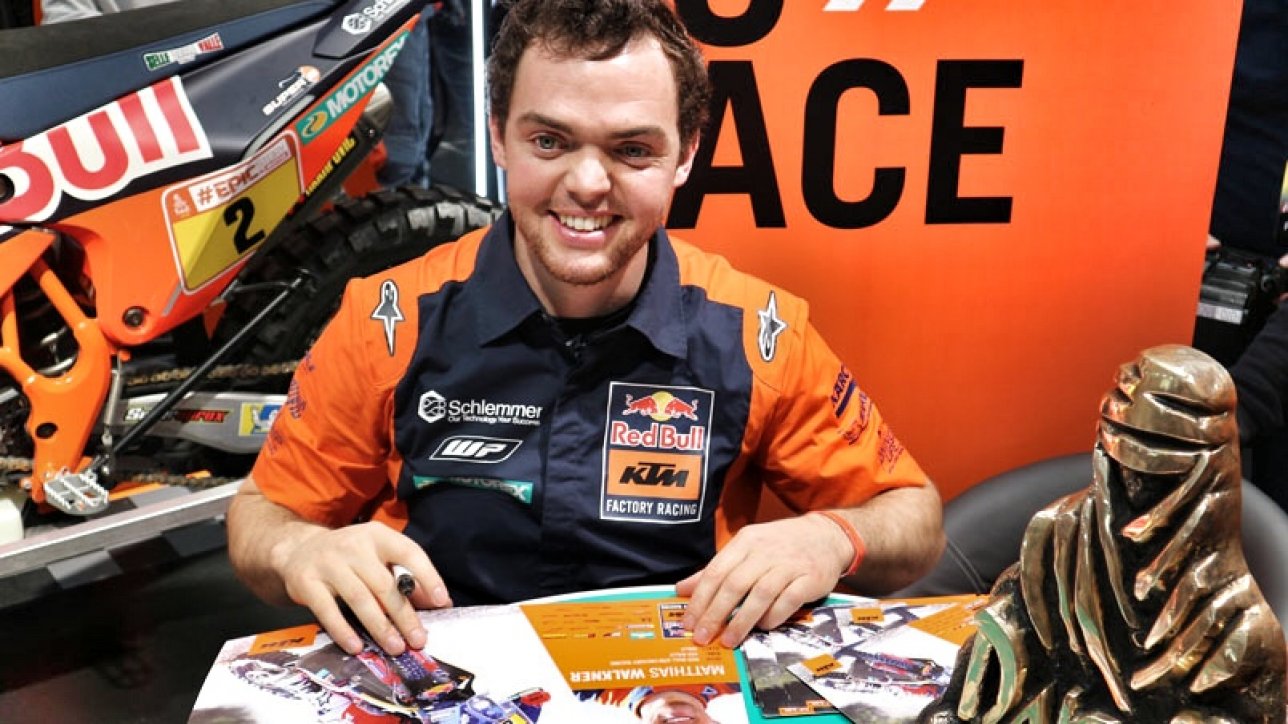 Linz | Upper Austria – One highlight of the `Motorrad Linz 2018´ motorcycle show was the appearance of the first Austrian Rally Dakar winner on a motorcycle. Matthias Walkner, who managed to come back after a severe injury and finished second place last year and who won the most difficult rally in the world this year. After the official programme, I had the opportunity to speak a few words with him…

Shortly before the appearance of Matthias Walkner I arrived at the `Motorrad Linz´at the Design Center Linz, to meet the daring desert fox in person. Due to the large crowd and the exhibition stand fully styled in orange, it was easy to find the venue. Carola Kreßl, the Press & PR Manager of KTM Sportmotorcycle GmbH welcomed me very kindly and since we both come from Upper Austria, we got into conversation quickly and easily. But only for a brief moment, as Matthias Walkner, who became Austria´s first winner in the bike category of `Rally Dakar´, has a tight schedule at present. Prior to his rally career, beside many other victories, he already became motocross world champion in the MX3 class in 2012. 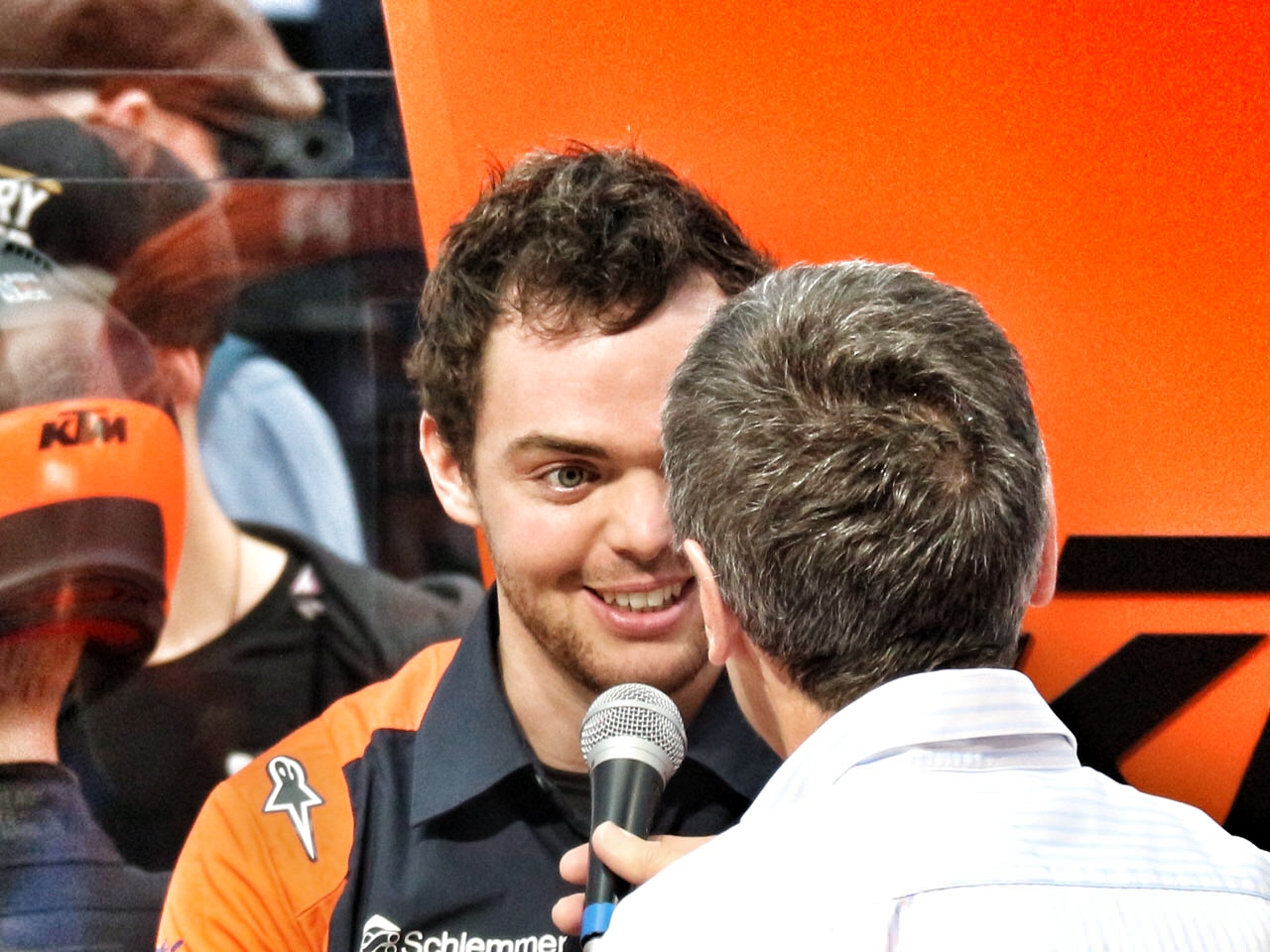 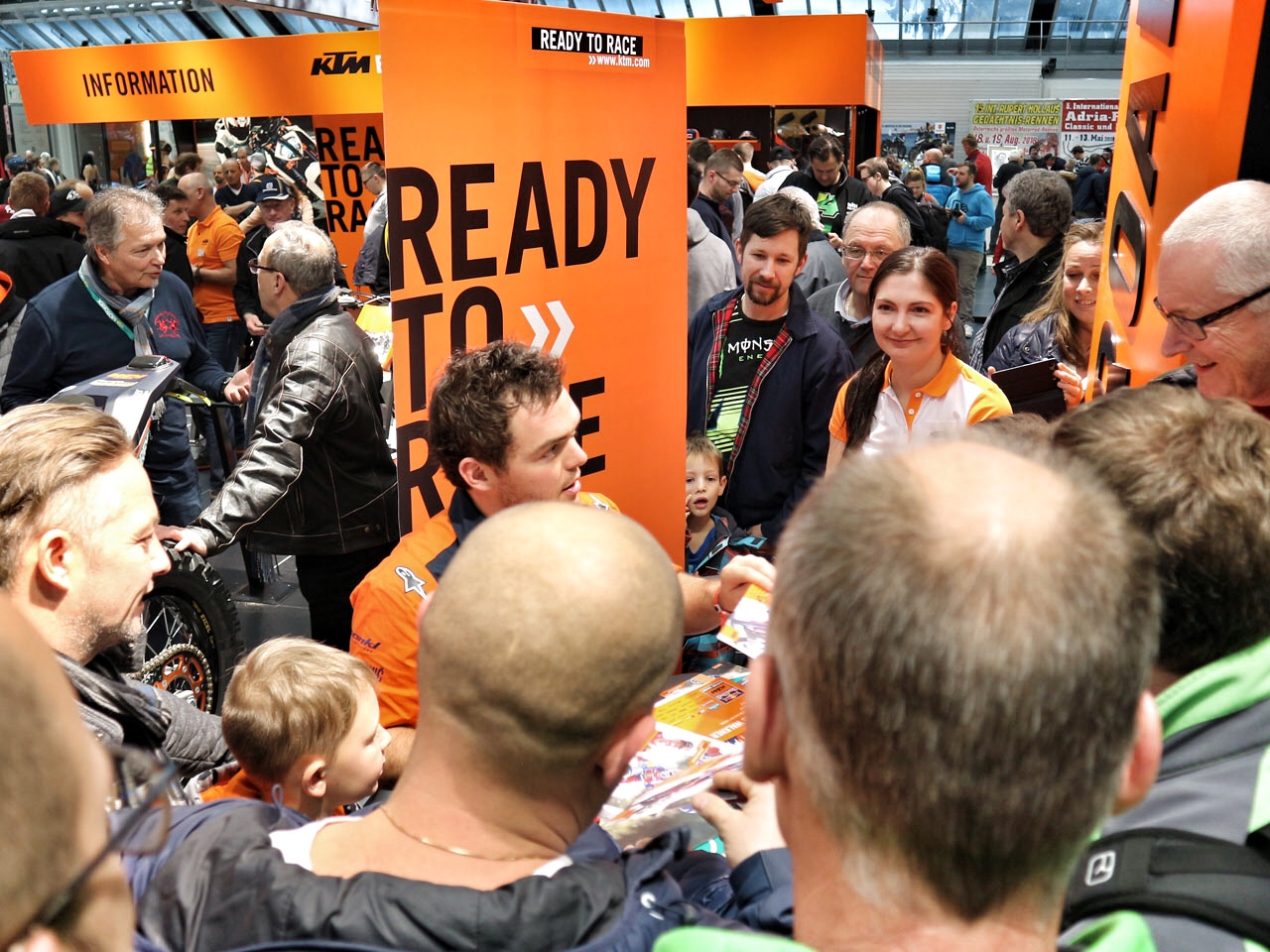 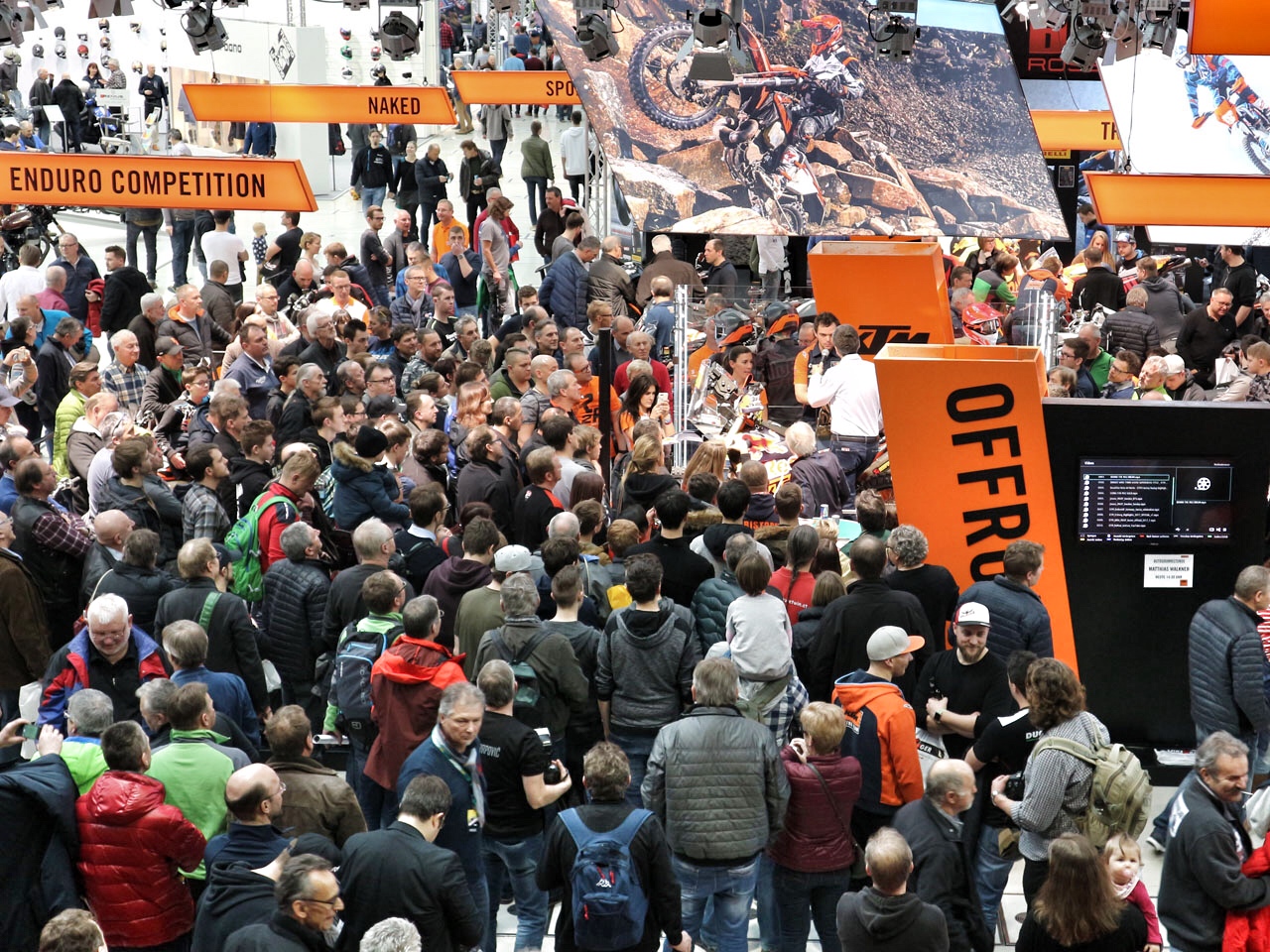 At the start there was an interview with Matthias onstage in front of a large crowd of fans. There he gave an insight into the race, what he had experienced and revealed how extreme and tough some situations had been. He also explained the details of his winning bike, a KTM 450 Rally Factory Edition, to the wide-eyed audience. Then came the signing session. It was then that we clearly saw what a likeable, natural and sociable person this superstar is. You don´t get to experience these kind of things every day, but that´s probably one of the reasons for his sensational success. So Matthias patiently granted the wishes of his fans. I got an autograph on my cap beside the one from three-time MotoGP world champion Jorge Lorenzo <gg>.

After this, Carola enabled me to exchange a few words with Matthias before he had to go to the next appointment. I asked him questions which he has probably heard very often, but which I find important in order to get to know a person better: `How did you feel when, after all that had happened in the previous years, you crossed the finish line first?´. Matthias answered that question very openly and said that after the injury and the long way back, it had obviously been an extremely cool feeling. Even the second place last year was extremely awesome, as he hadn´t expected it at all. Because of this the expectation the people around him had increased, so this year in order to make this victory possible simply everything had to go off smoothly. During this time he improved himself further very quickly and by doing so had to come to know the downside as well. Because in the past three and a half years he experienced everything there is to experience. 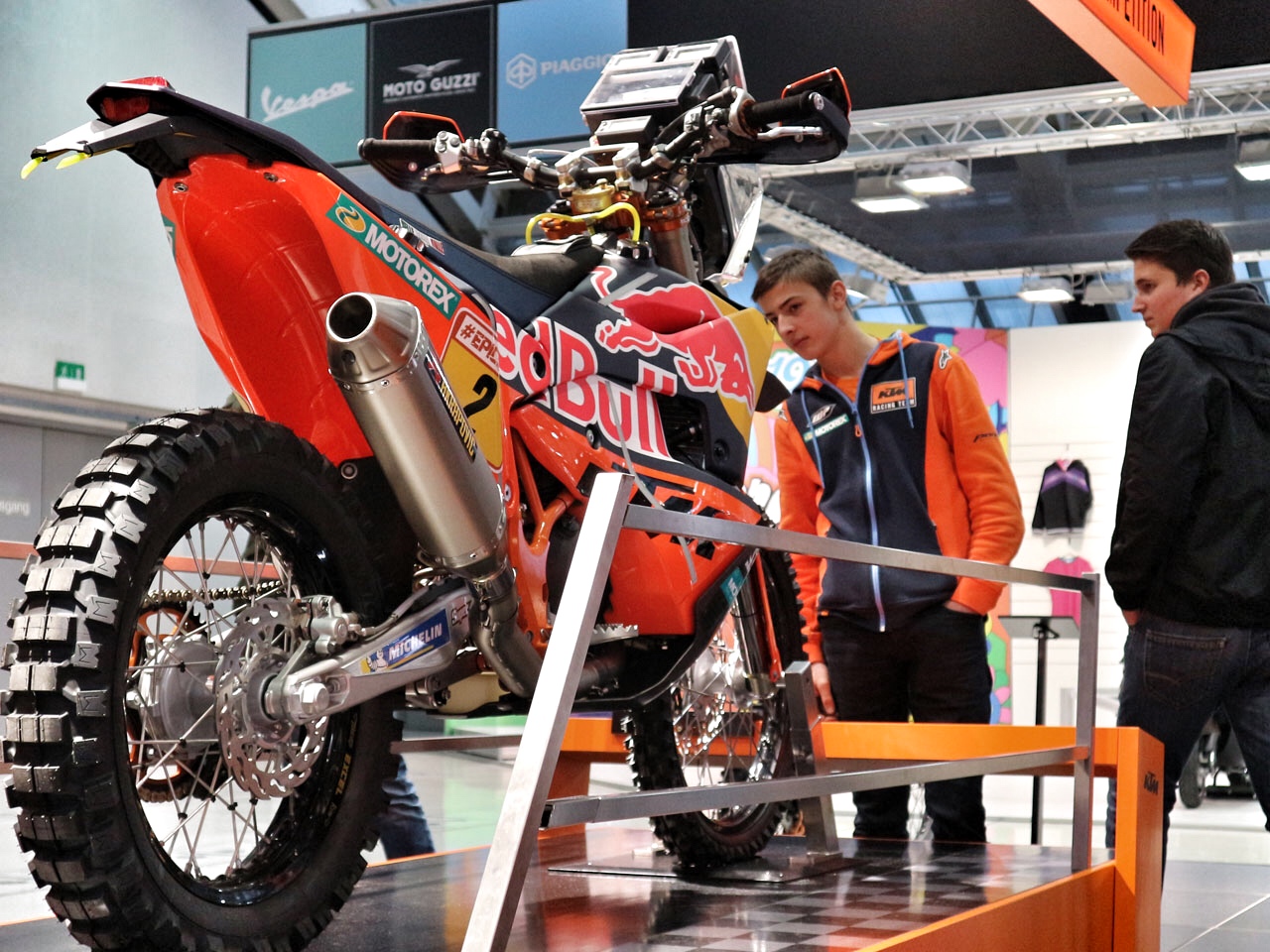 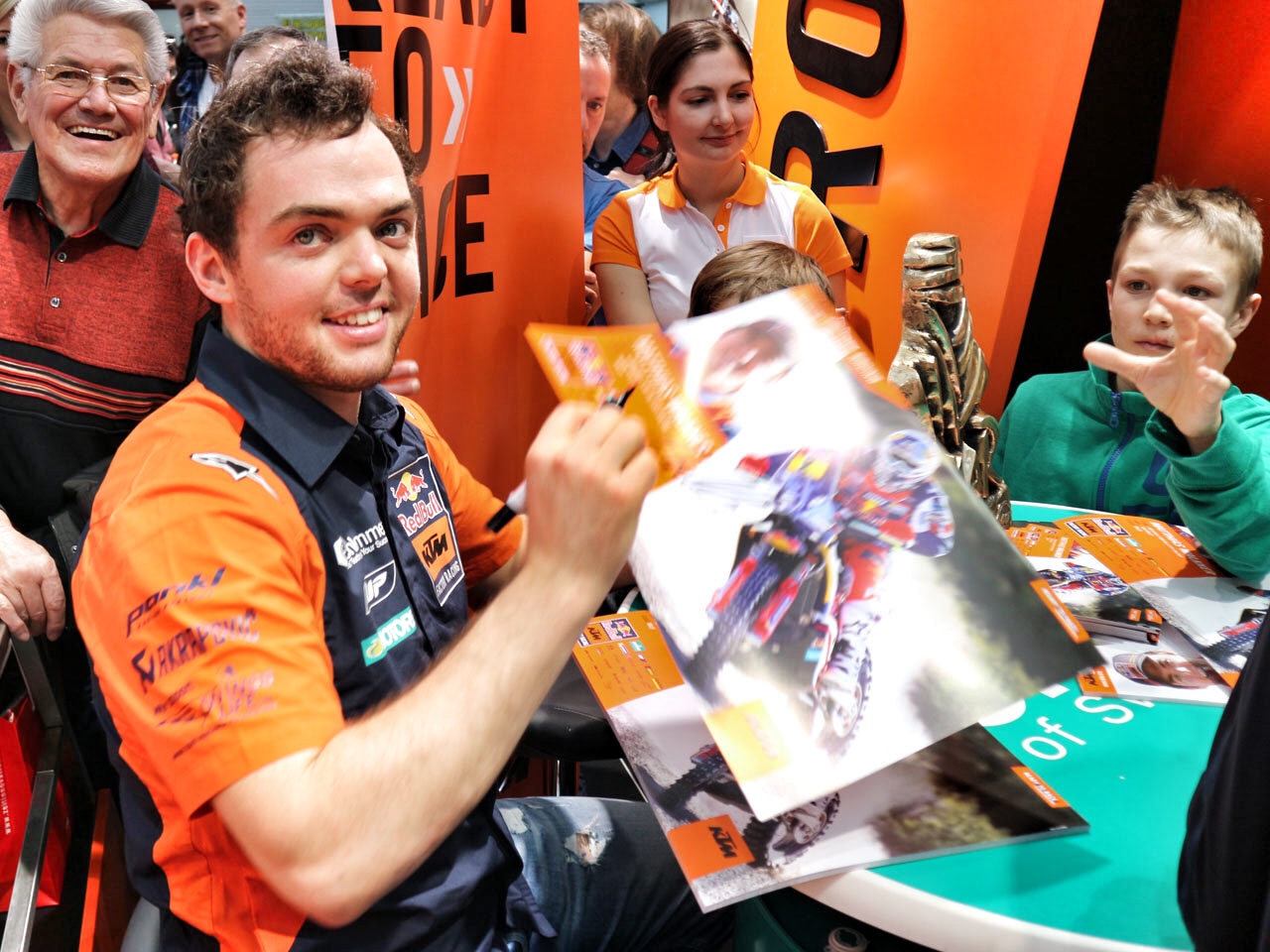 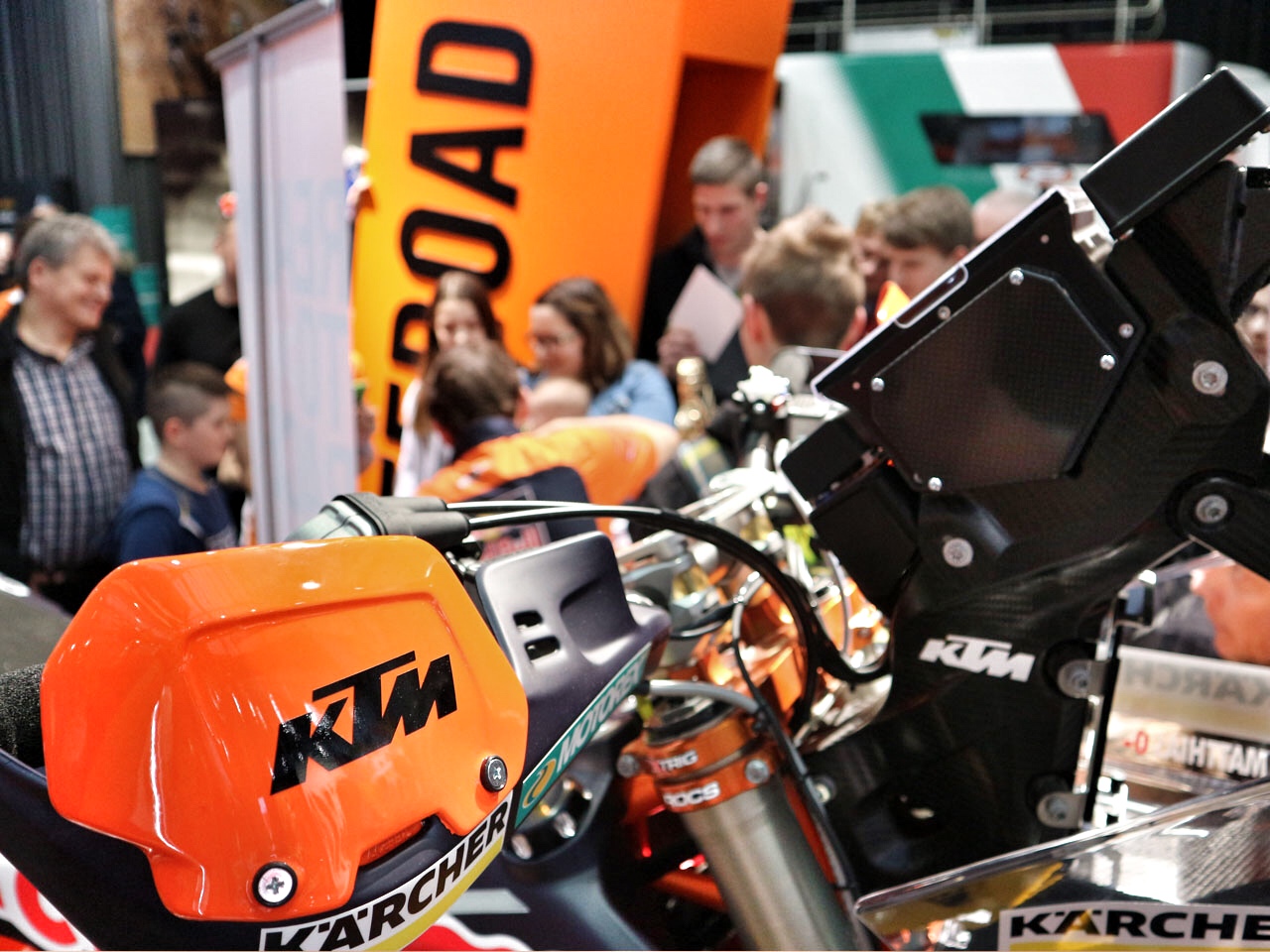 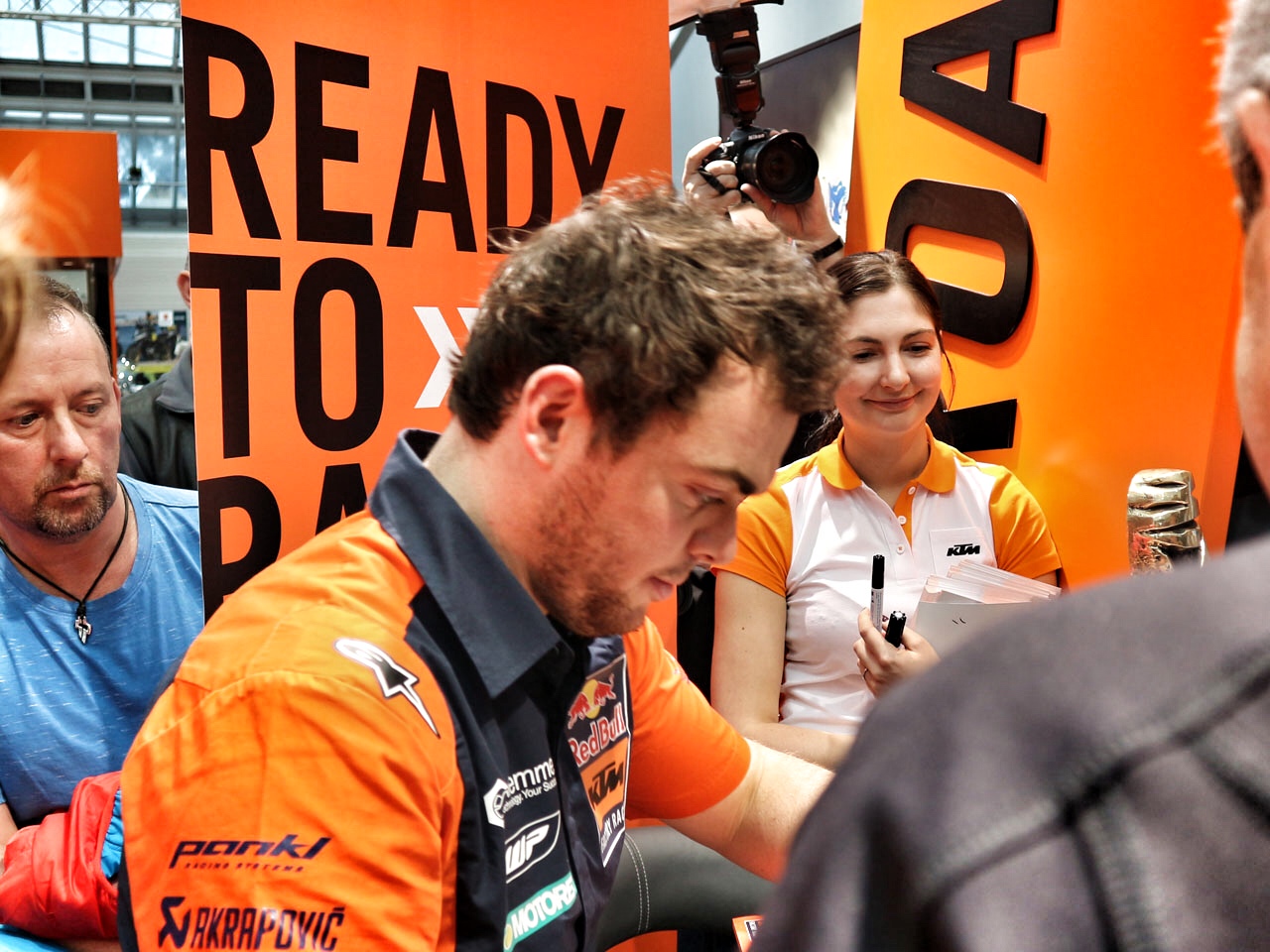 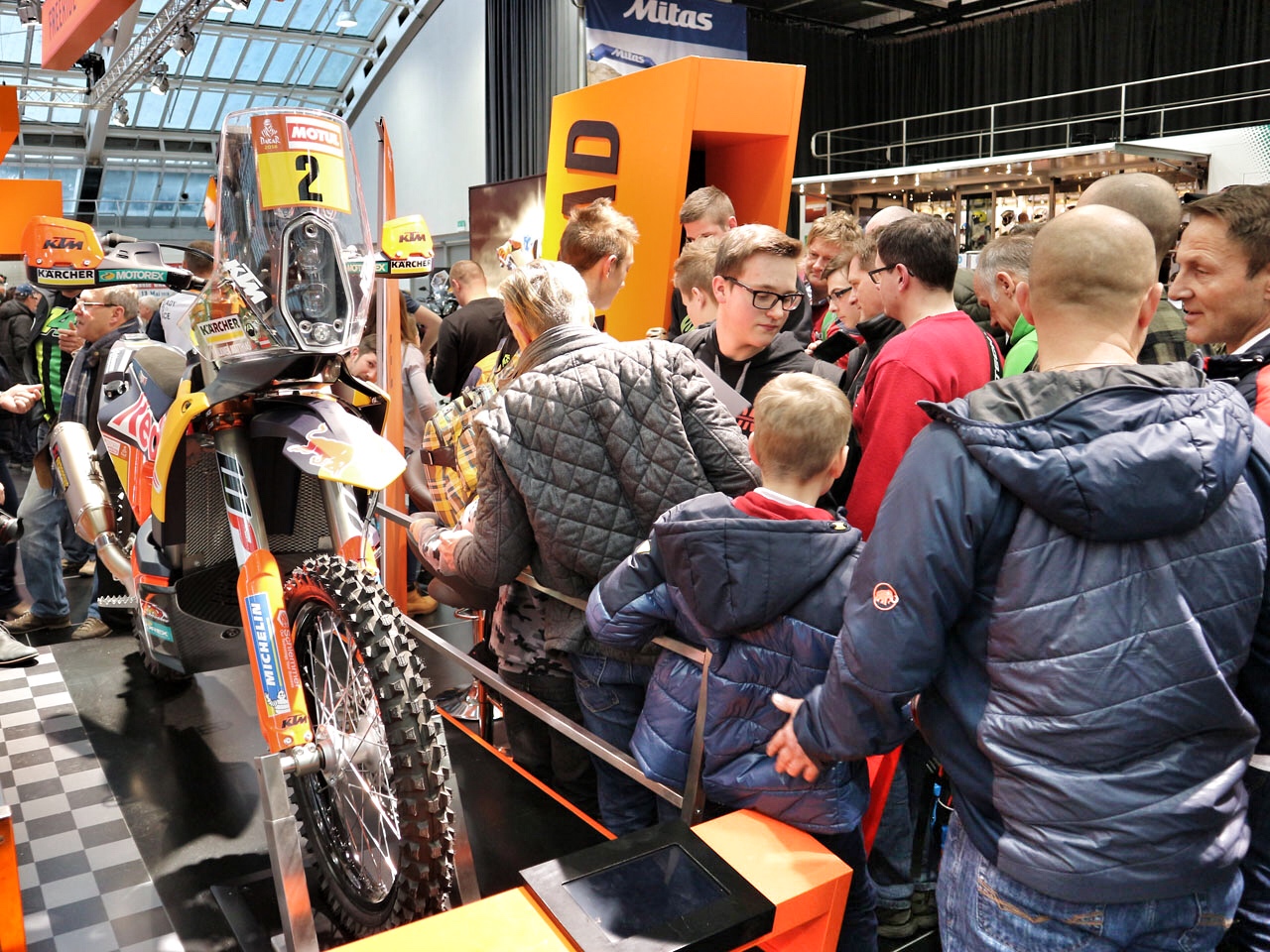 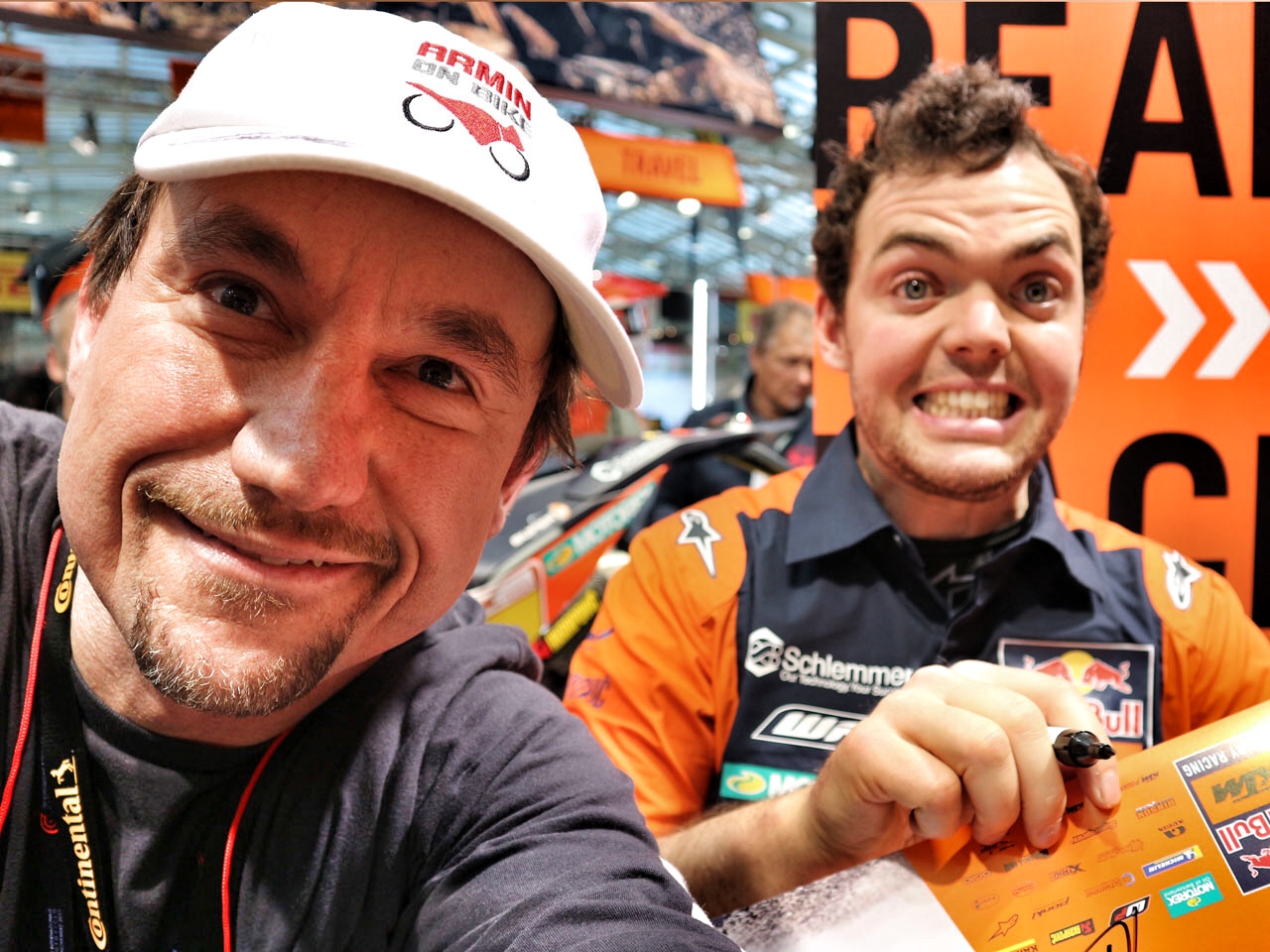 In my preliminary report on the show I promised you the KTM MotoGP-Bike RC16 .This marvel from last season was there at the fair and could be seen as well as be touched. Tobias, a very competent and likeable member of staff of KTM Braumandl (Wels and Linz) explained to me the high-tech device and familiarised me with it. It´s fascinating to see how meticulously and professionally lightweight construction is being practised here. The Red Bull KTM MotoGP Factory Racing Team is going to race with Pol Espargaró and Bradley Smith again at the first race of the season on March 1 in Qatar. Since there were consistent and significant changes being made on the RC16 in the 2017 season, this season they can rely on the continuous further development of an already very good foundation. 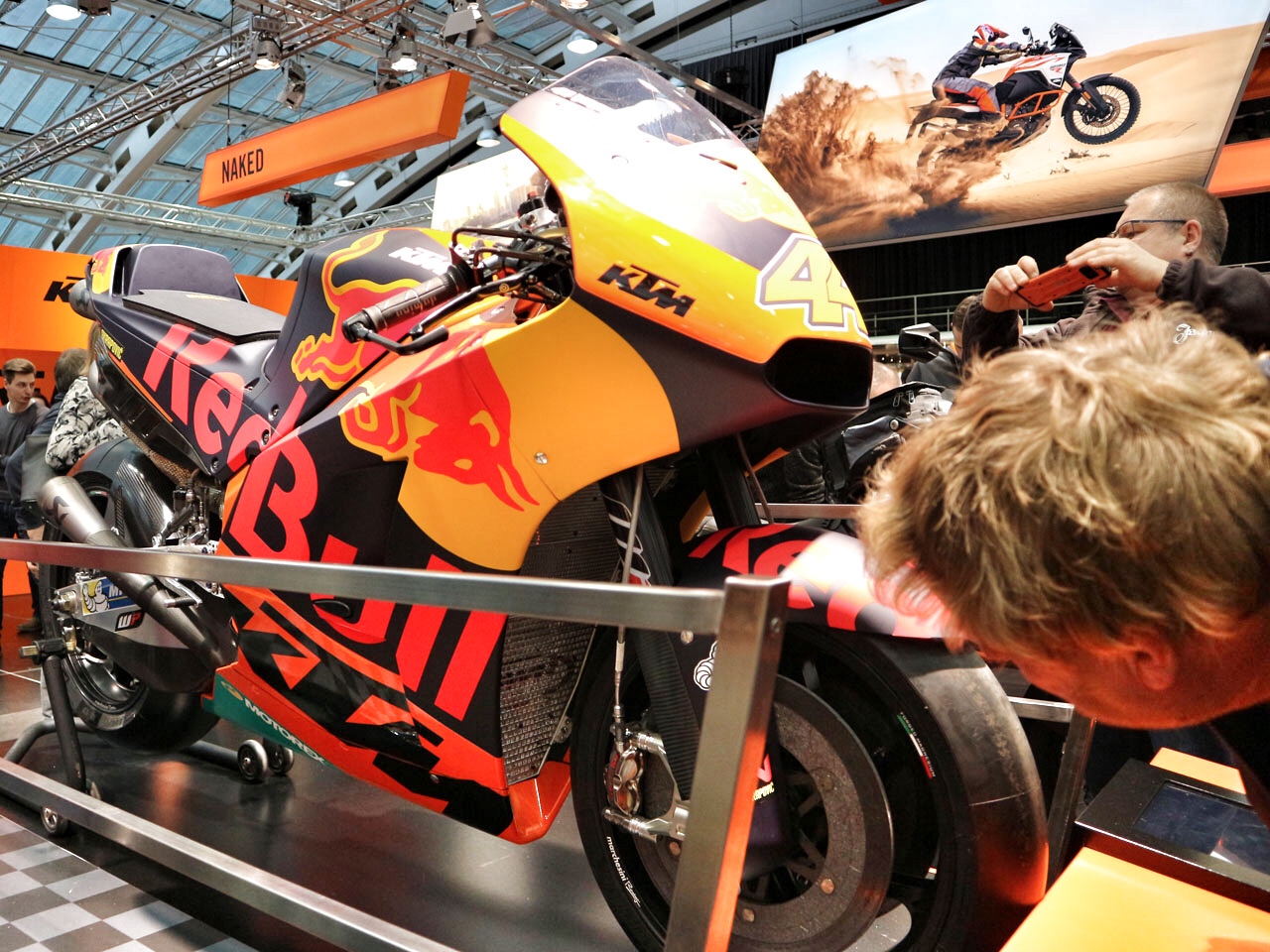 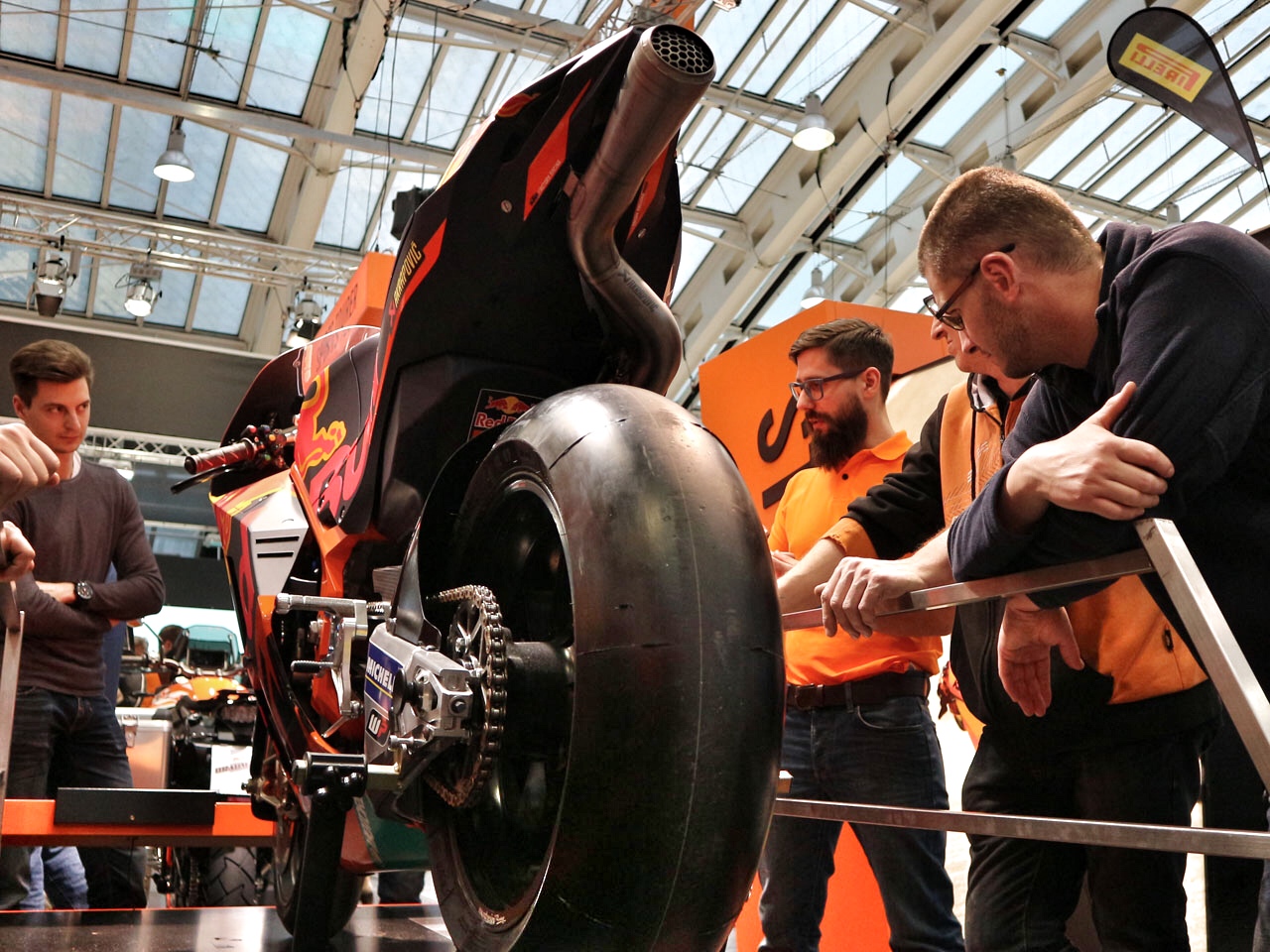 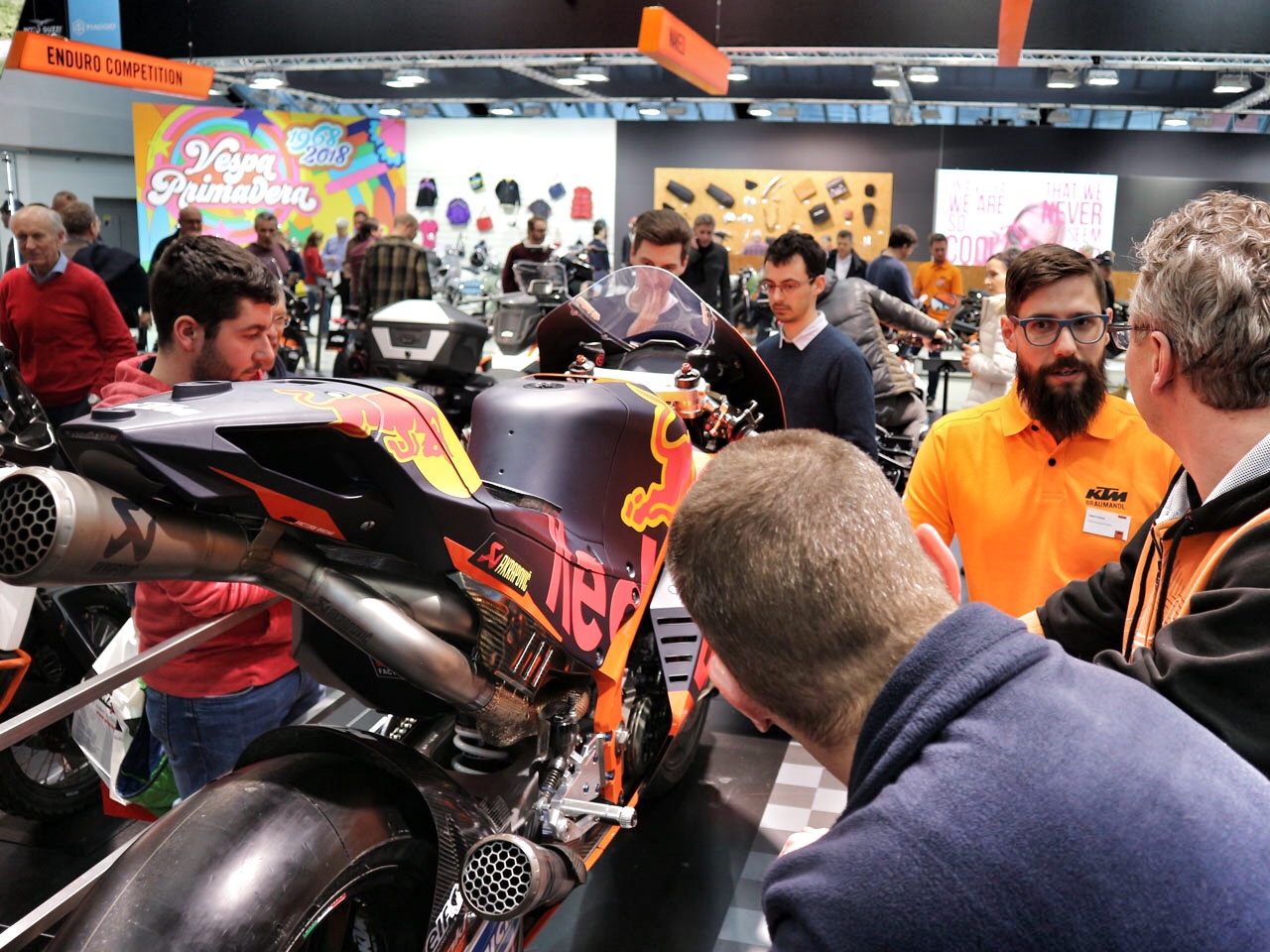 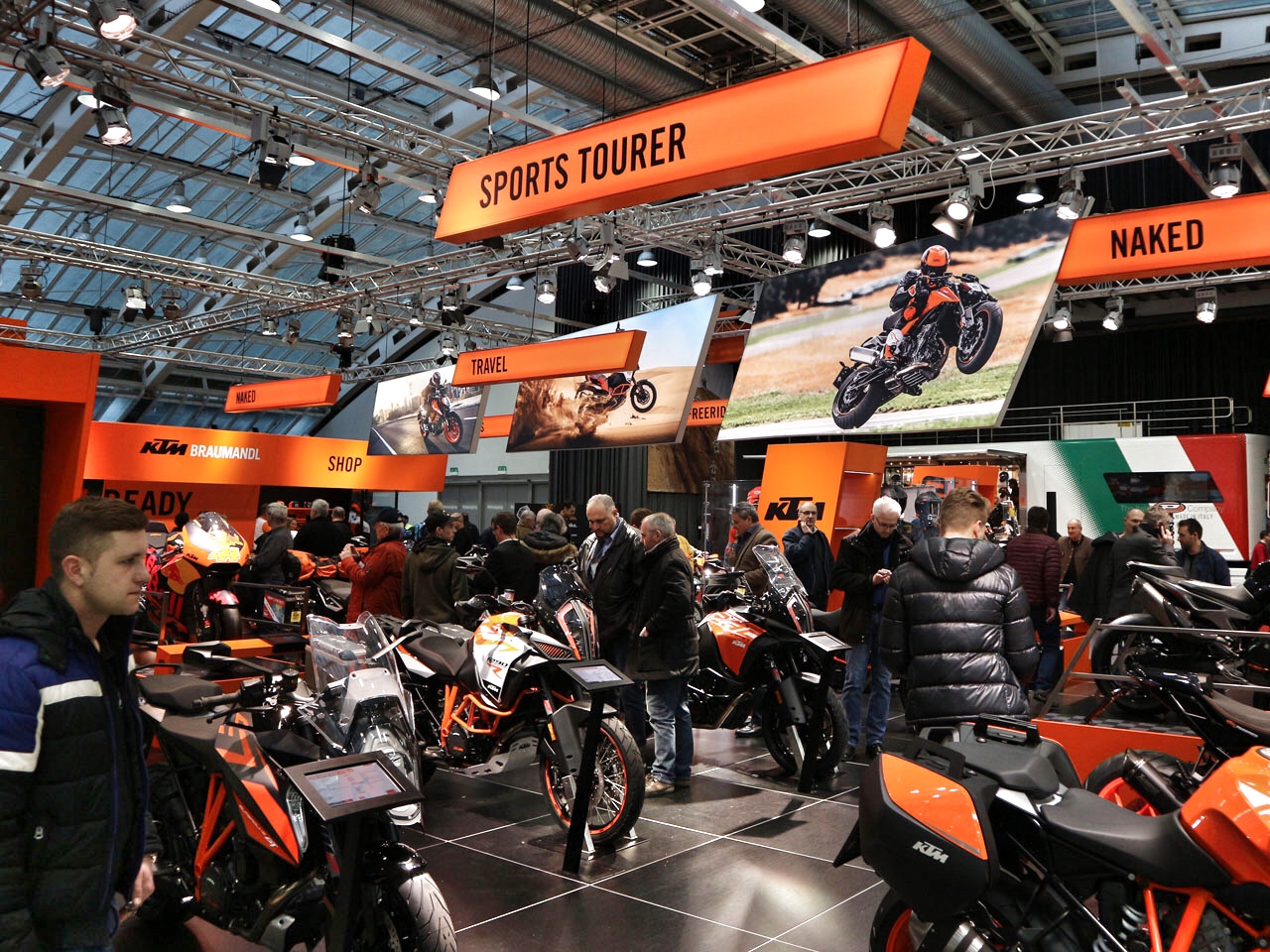 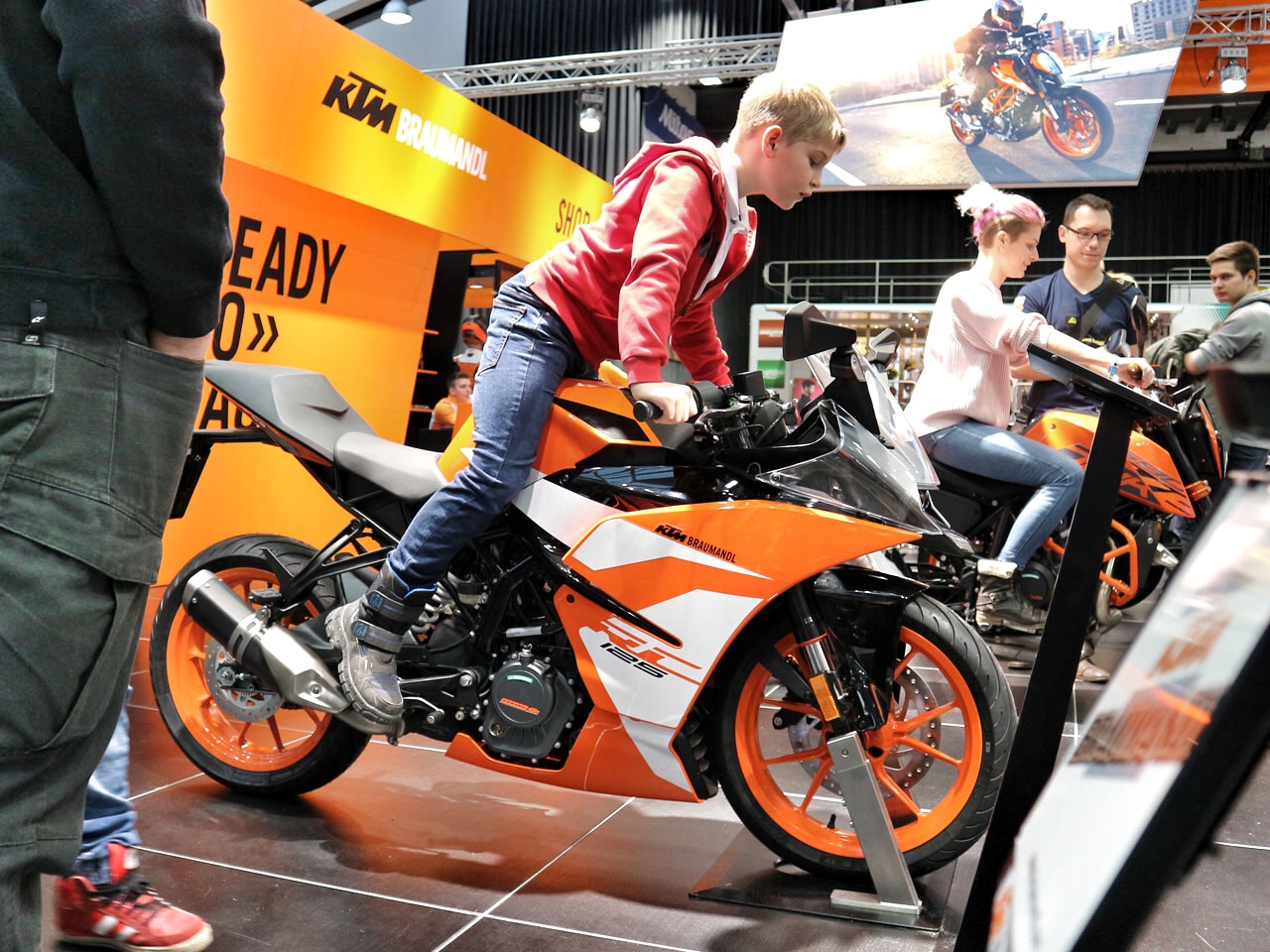 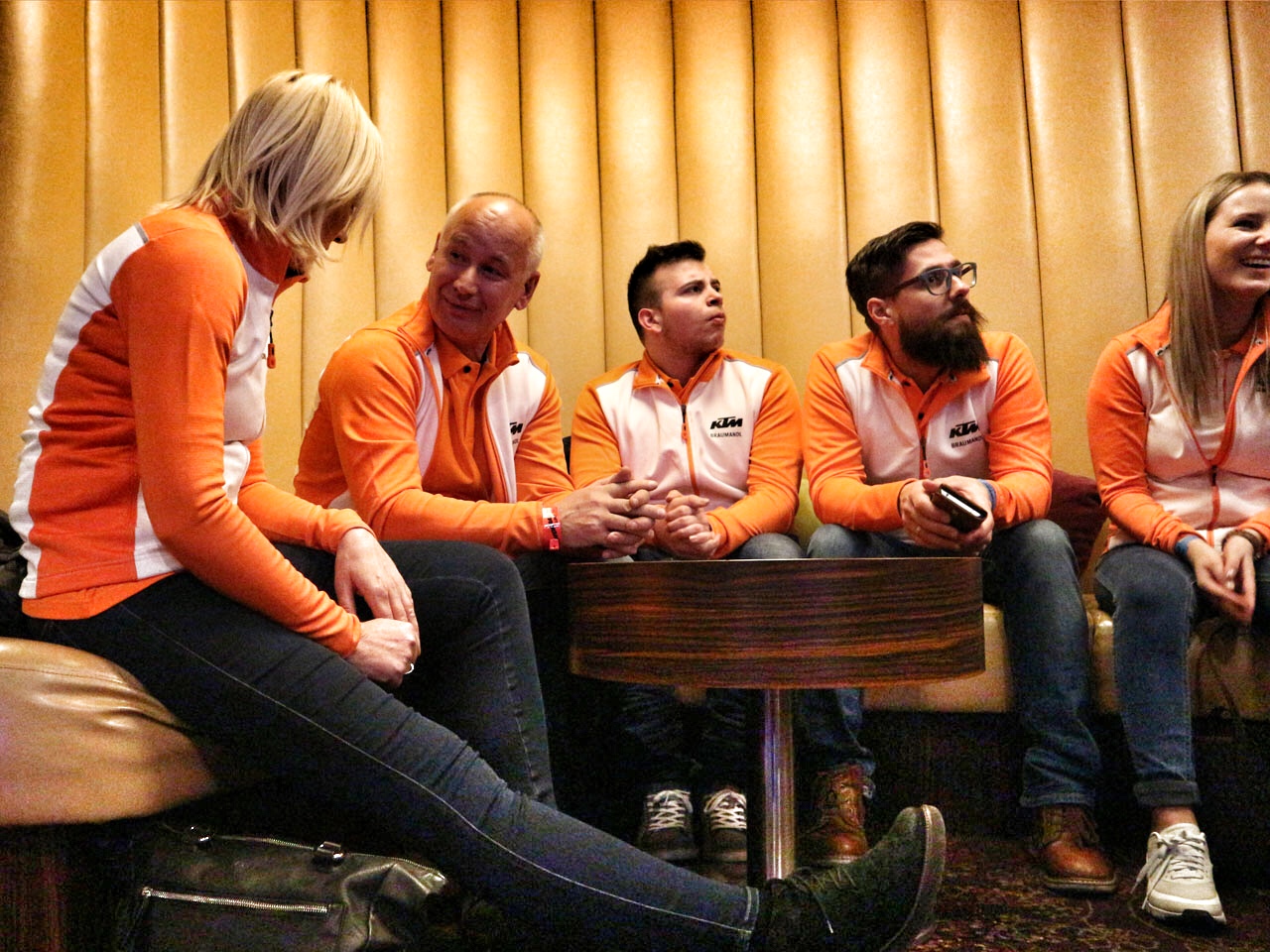 As you can see, there was a lot going on at KTM at the Motorrad Linz 2018 fair. It goes without saying that the young had to be there as well. The KTM booth was one of the most beautiful and best-organised booths of this fair. Those taking care of the Press were very friendly and professional. A big thank you to Carola from KTM. In the following video I want to give you a glimpse into what it was like at the public interview with Matthias, from a bird´s-eye view so to speak, and show you how well-attended this event was .Thank you also to Matthias for the interesting conversation and all the best for the upcoming races. It was really nice meeting you!