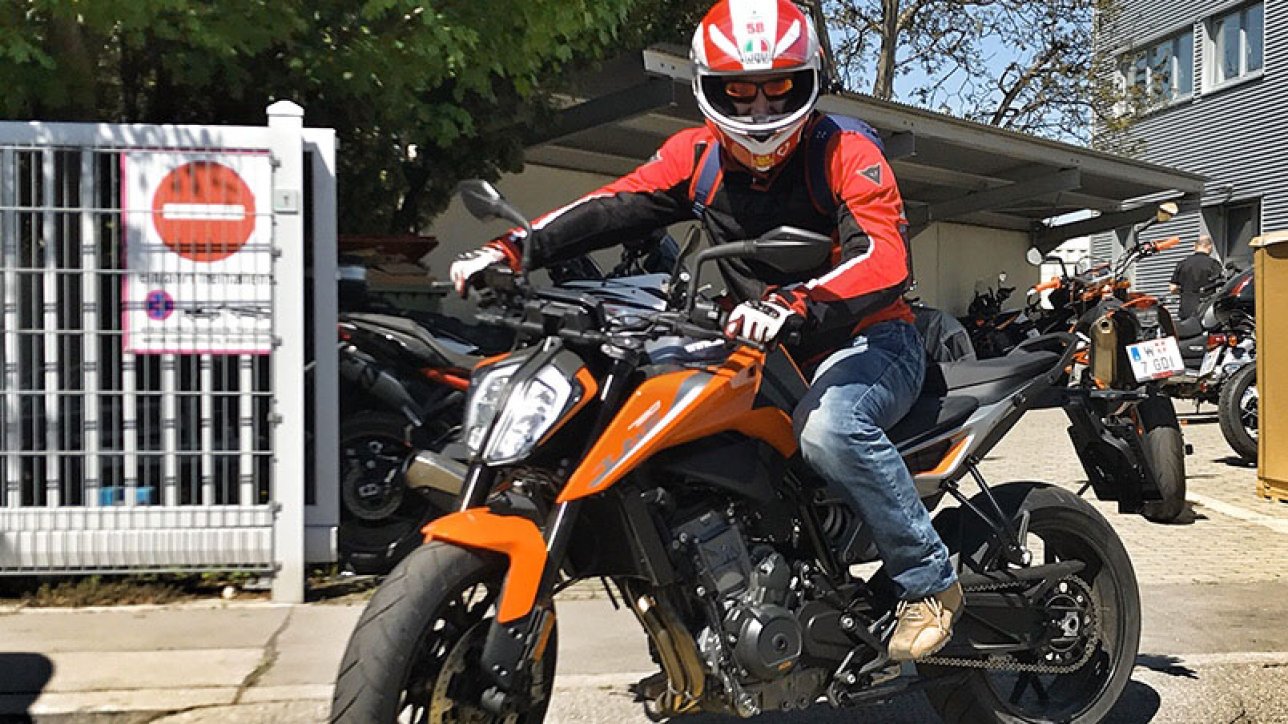 Wachau | Lower Austria – On a warm and sunny afternoon in Aprils second half I was given the chance by Il Moto in Vienna to test the KTM 790 Duke extensively. My destination was the Wachau, for this time being in full bloom and with various given road surfaces; ideal for a bike test and comparison with my own Ducati 821…

After a third attempt I finally managed to drive the new 790 Duke by KTM for the first time. I didn’t get elected as starter at the KTM Duke Battle this year: Karl Katoch understandably went for the Landshaag specialist Mario Klepatsch und therefore won the mountain race with his team. In March, during my stay in Sardinia, the Duke was on site but the papers didn’t arrive at Travaglini Motori in Alghero.

Hence the joy was even bigger finally driving the new model from KTM. The KTM and Triumph dealer Il Moto in Vienna provided a Duke 790 for one afternoon to go into extensive testing. After a short and proficient introduction by Stephie, I directly hit the road. Due to the location of Il Moto, also known as `KTM Wien Nord´, the route was quickly evident. 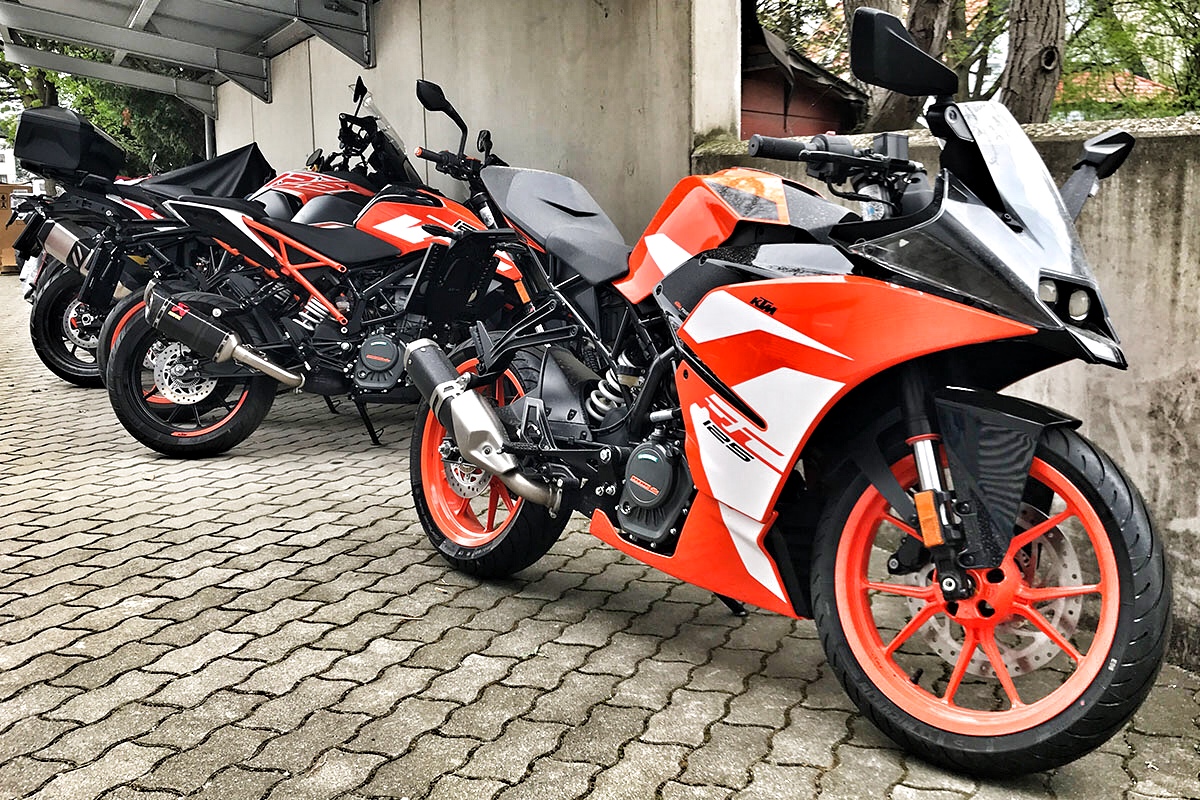 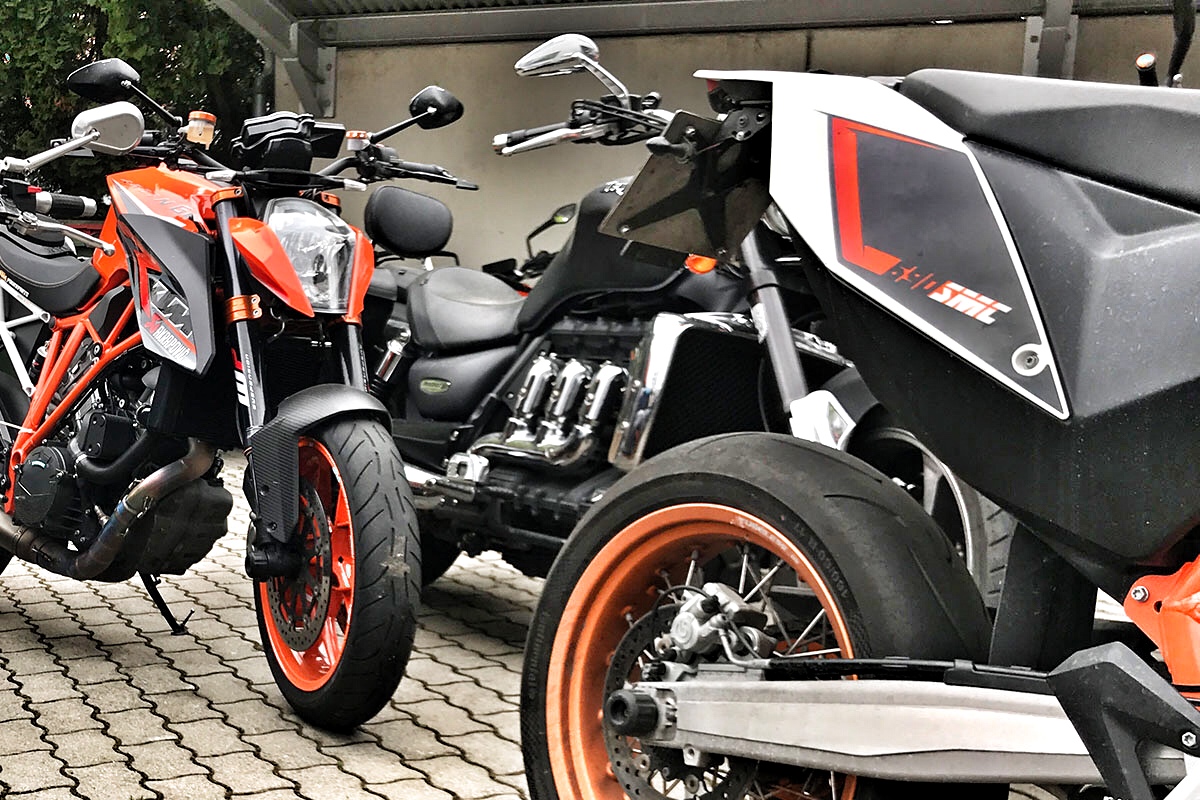 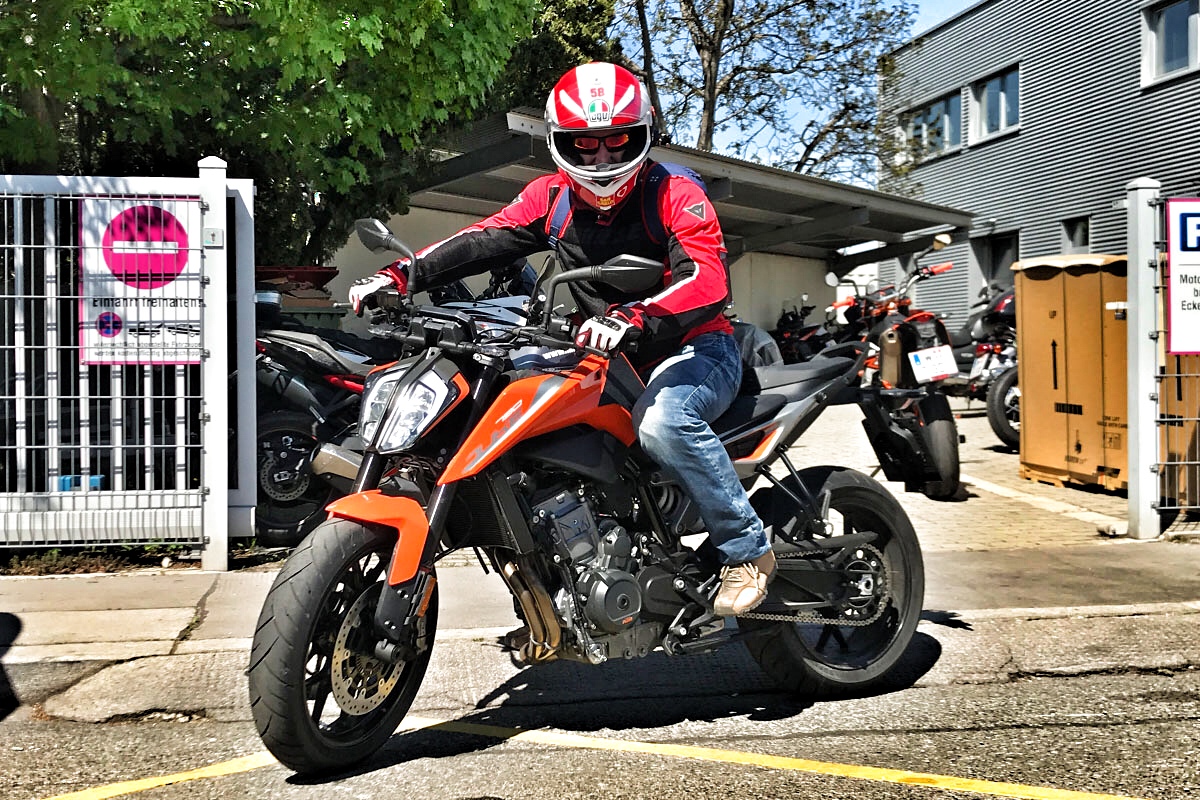 I discovered the street on the Jauerling, north by Spitz (Danube), in the previous year within the scope of the Health Angles Charity Ride. The partly tight and twisting road up there offers anything that makes a bikers heart leap: from serpentine till sustained curves and various gradients. The journey begins at the autobahn A22 and freeway S5 to reach Krems and therefore the Wachau as quickly as possible.

Already over the first meters it became apparent how manageable the new 790 Duke is. By shifting your weight you can easily conduct her, while she also keeps track at higher paces without problems and impresses through a very well-balanced road behavior. As I turned the new bike due to the running-in only momentary to a maximum of 7.000 r/min, I cannot evaluate it for a higher speed range. After I reached Krems and driving around through the old town including a short “espresso stop”, I continued my trip to Dürnstein. 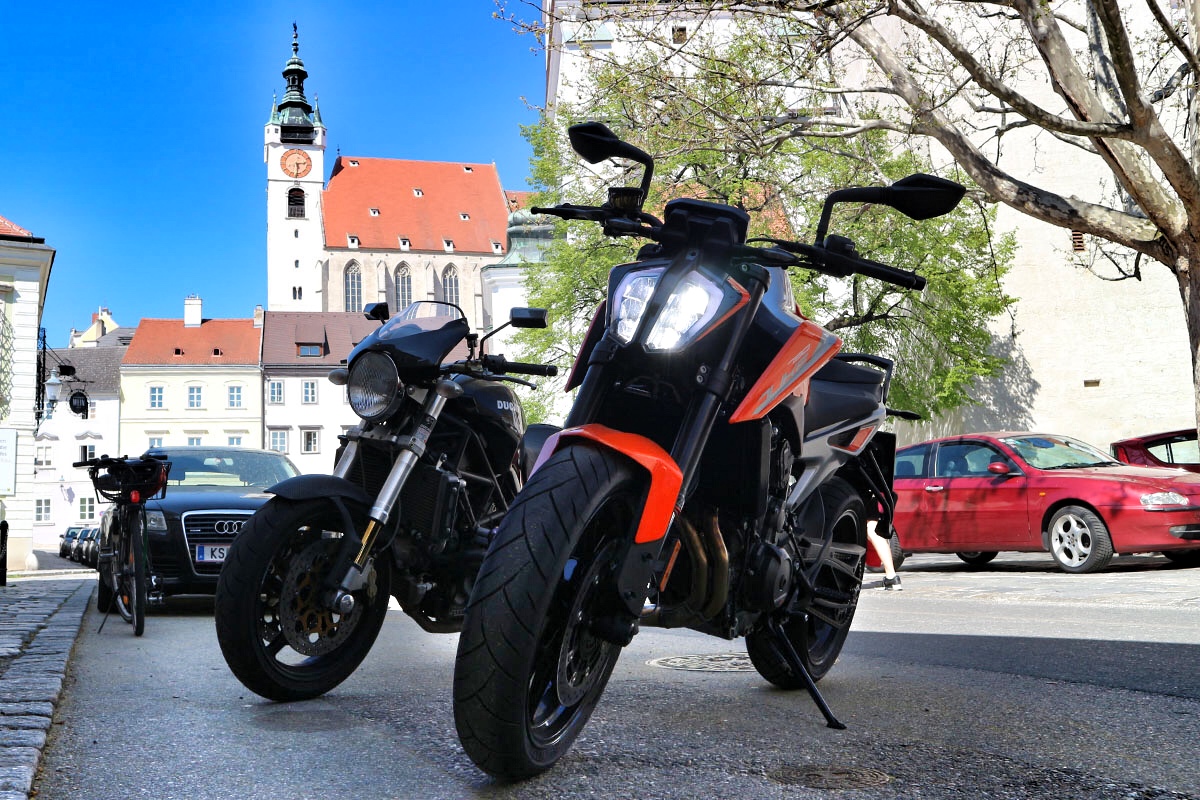 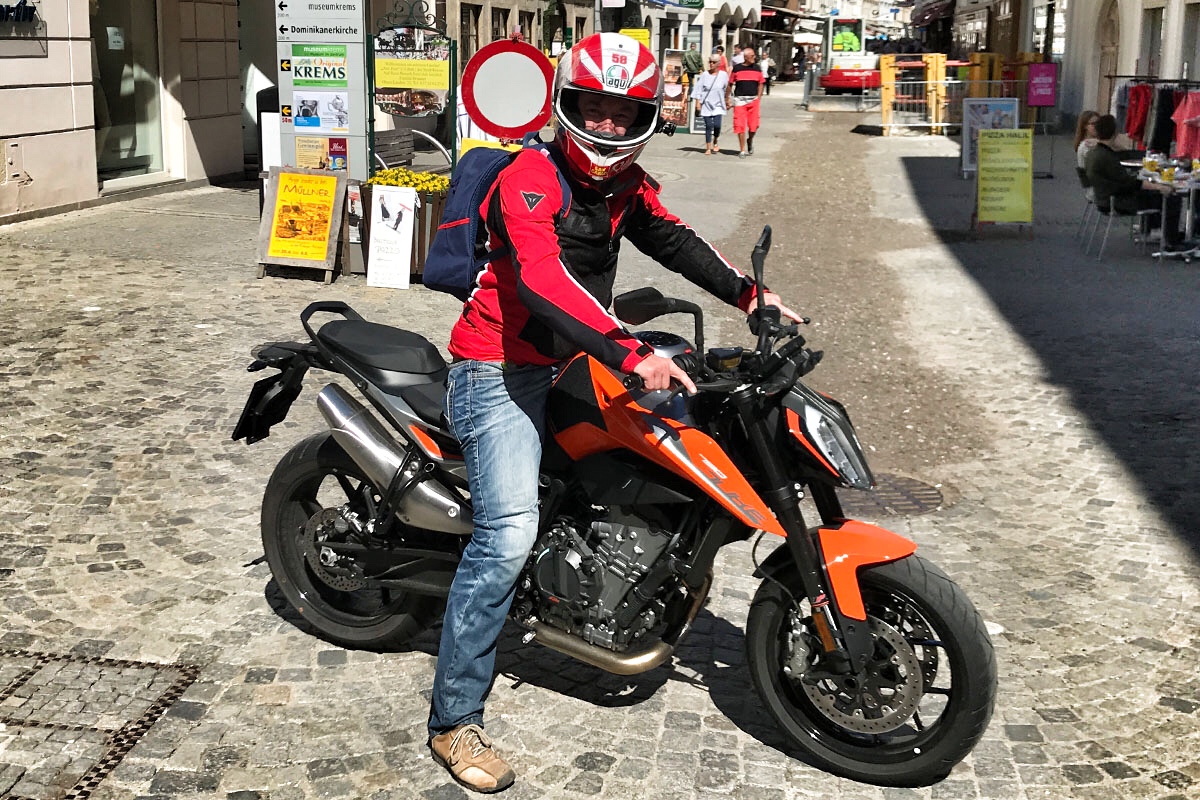 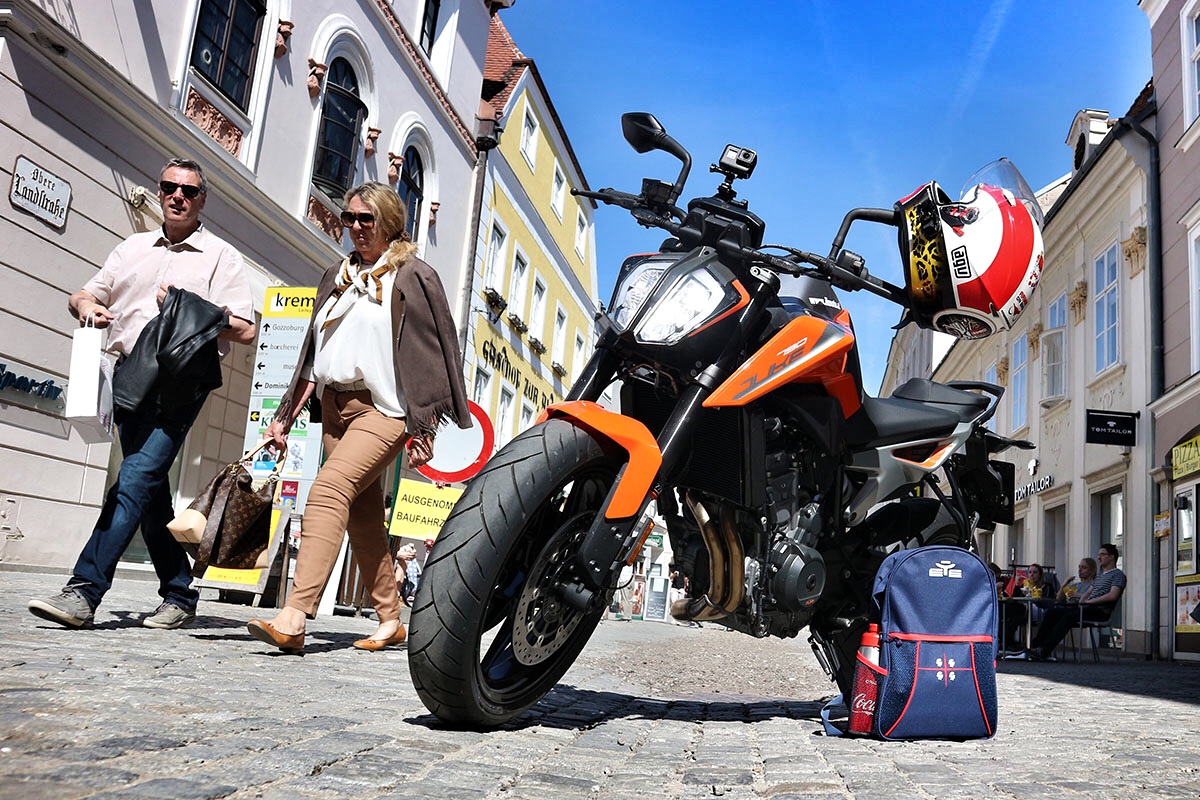 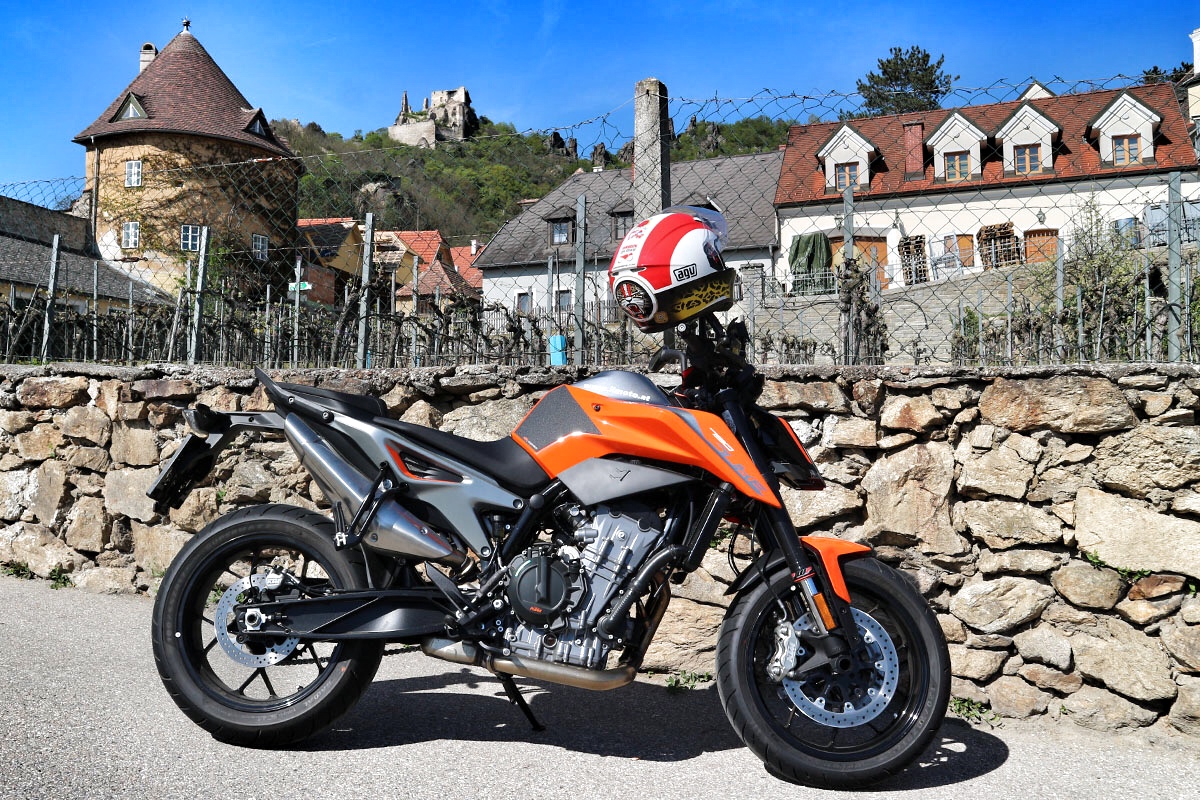 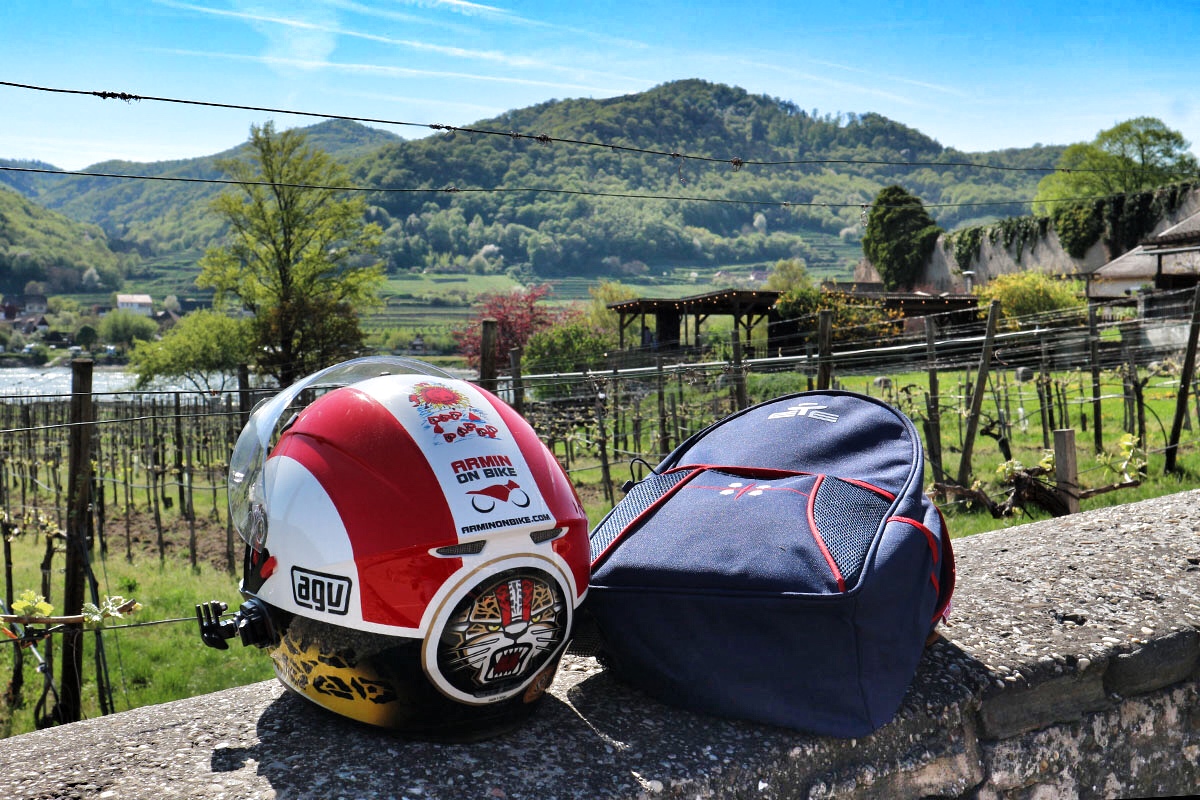 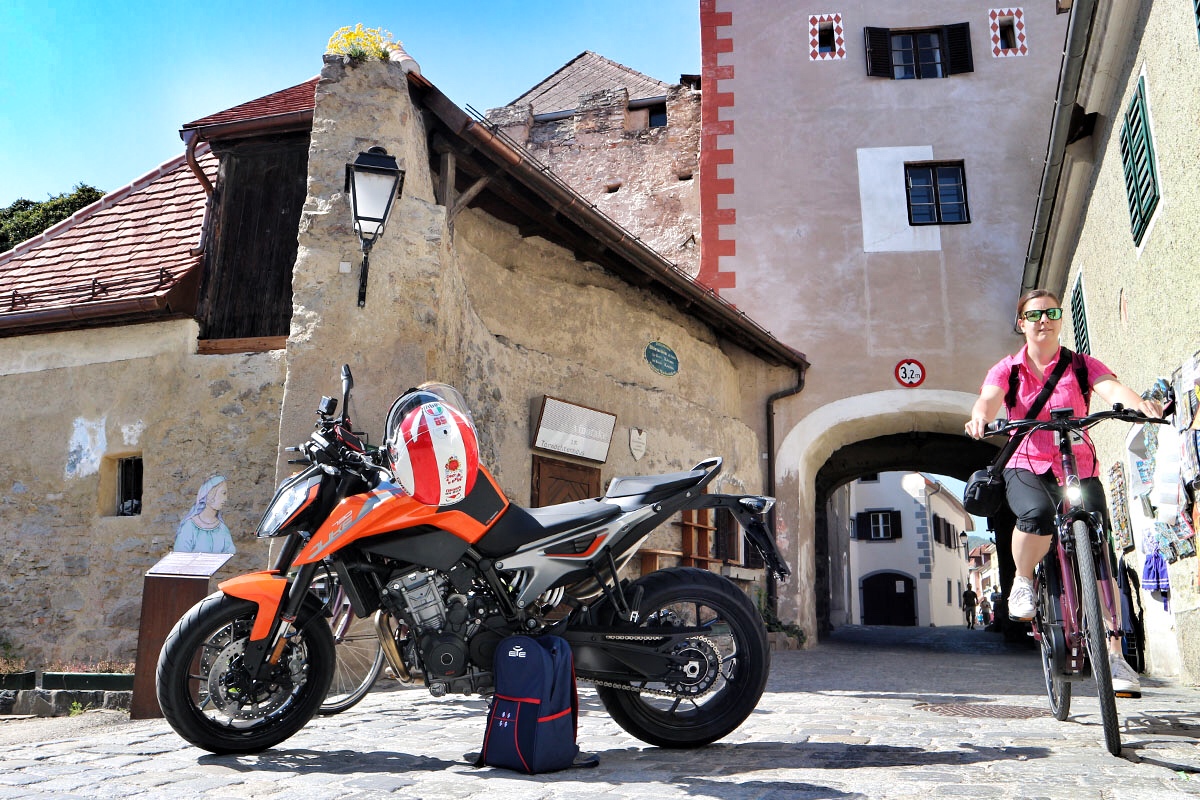 The test was appealing for me in a way, that this bike is, just looking at the performance data, almost identical with my own Ducati Monster 821. The 790 Duke is the first two-cylinder naked bike by KTM in the middle class and offers with 105 hp and 86 Nm completely sufficient power for the street. The handiness is surely based on the low, roadworthy weight of 189 kg. My Monster 821 lays with around 15 kg more notably above that. For me the difference showed especially in the slow city traffic and the serpentines up the Jauerling. The KTM is here very agile and maneuverable, doesn’t have to be asked twice and tilts willingly in the tight curves.

From Dürnstein I drove sweeping curves along the Danube at a sporty pace. At overtaking maneuvers the Duke proved its good torque already in the lower speed range. Afterwards I approached Weißenkirchen in der Wachau, being known for its wine and gastronomic highlights, with the winemaking villages Joching and Wösendorf. In Wösendorf I had to stop badly, to photograph the Duke under a beautiful, flourishing cherry blossom.

For a naked bike relatively high seat of the Duke 790 with 825 mm, was something I had to get used to in the beginning, as also the tank form, compared to the Monster 821, does not allow to integrate oneself into the bike. Towards higher speeds I like to press my elbows against the tank to increase the stability. Something which is not possible with the 790 Duke due to the construction. Therefore the Ducati has the better ergonomics with a size of 178 cm. On the contrary I was very impressed of the Dukes Quickshifter, allowing even faster gear changes, as changing gears up and down are possible without clutch. The breaking system in the front with the 4-piston radial fixed caliper on 300 mm twin discs and disengageable cornering ABS grips strong and well dosed. 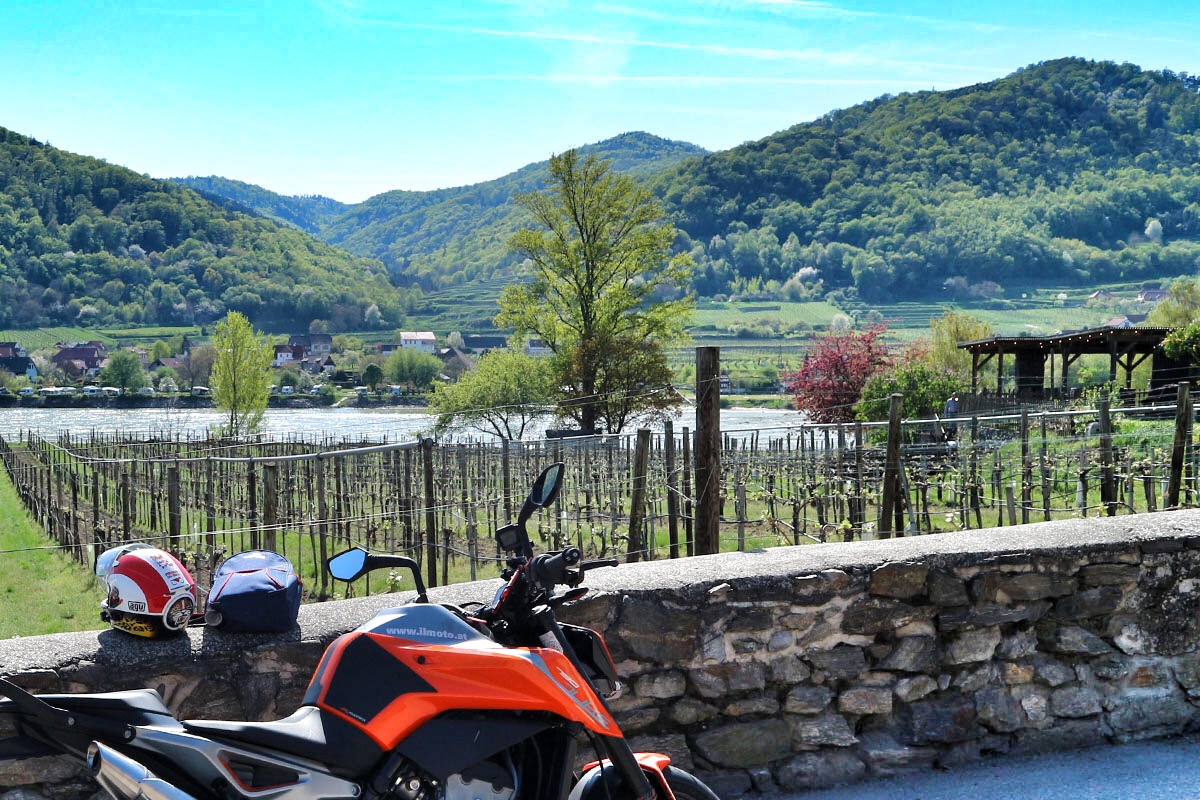 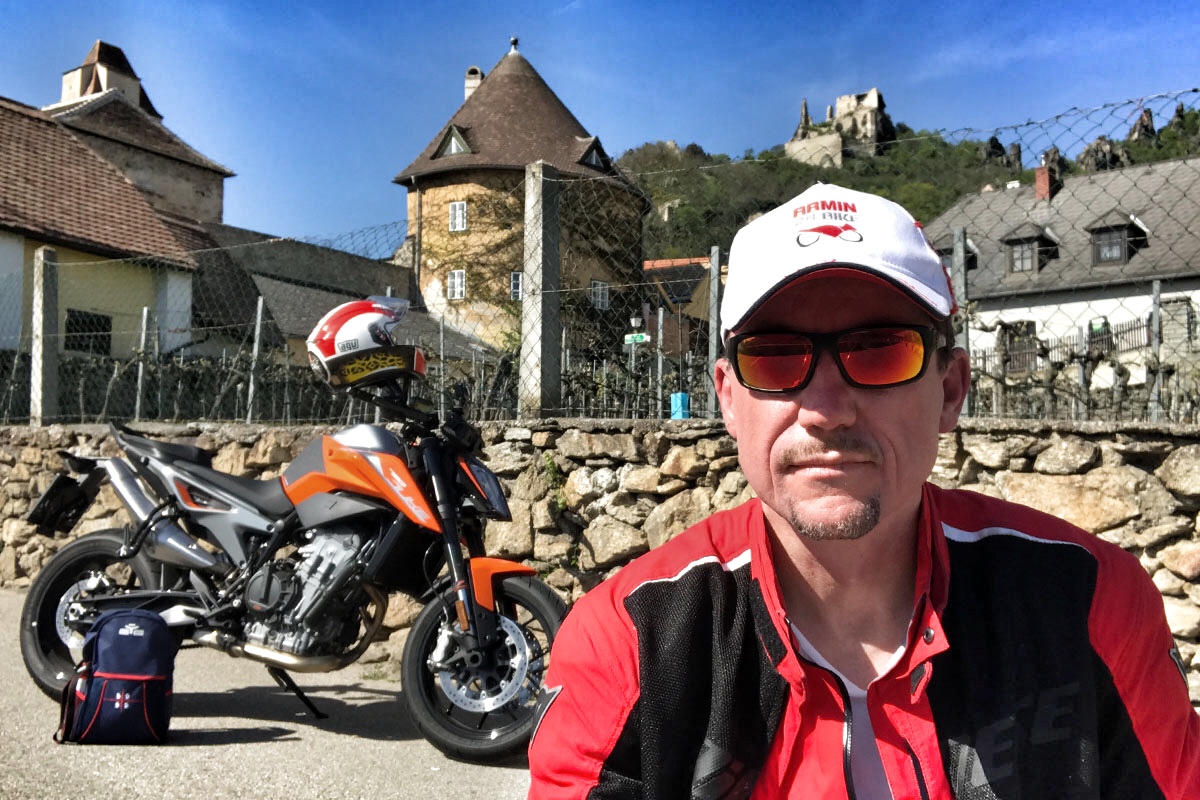 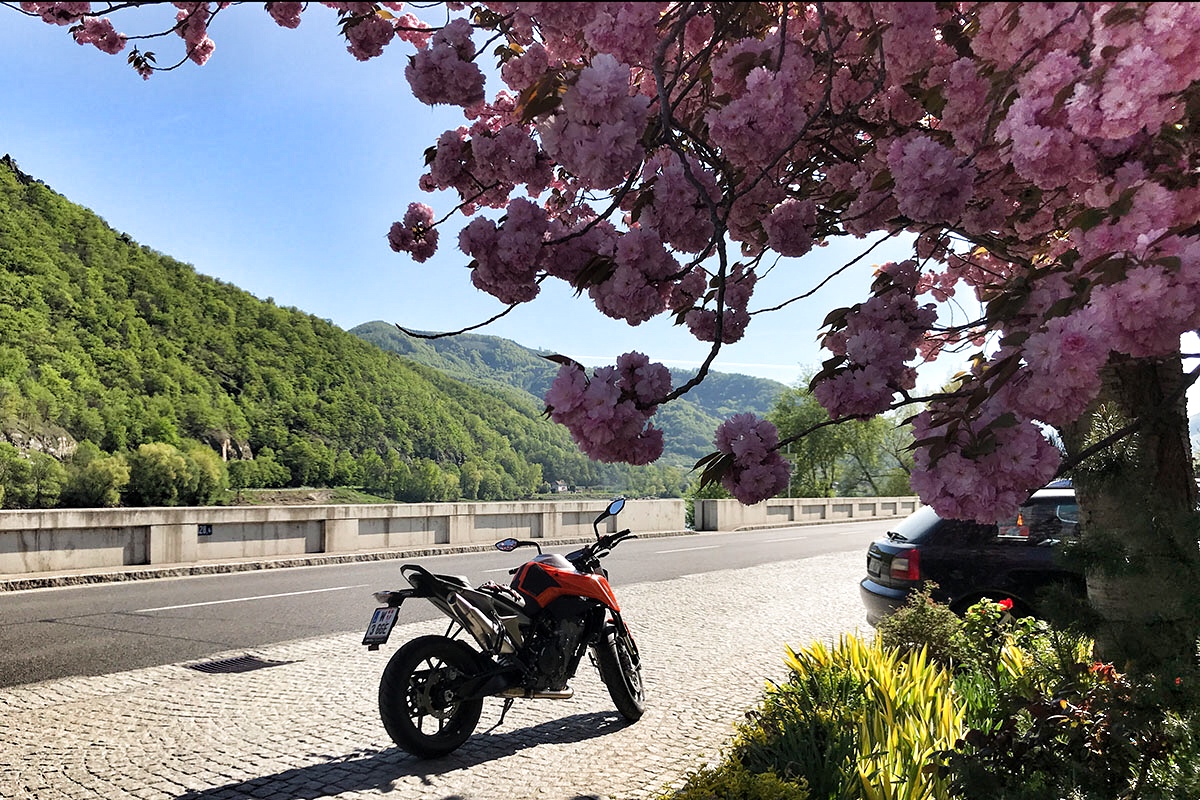 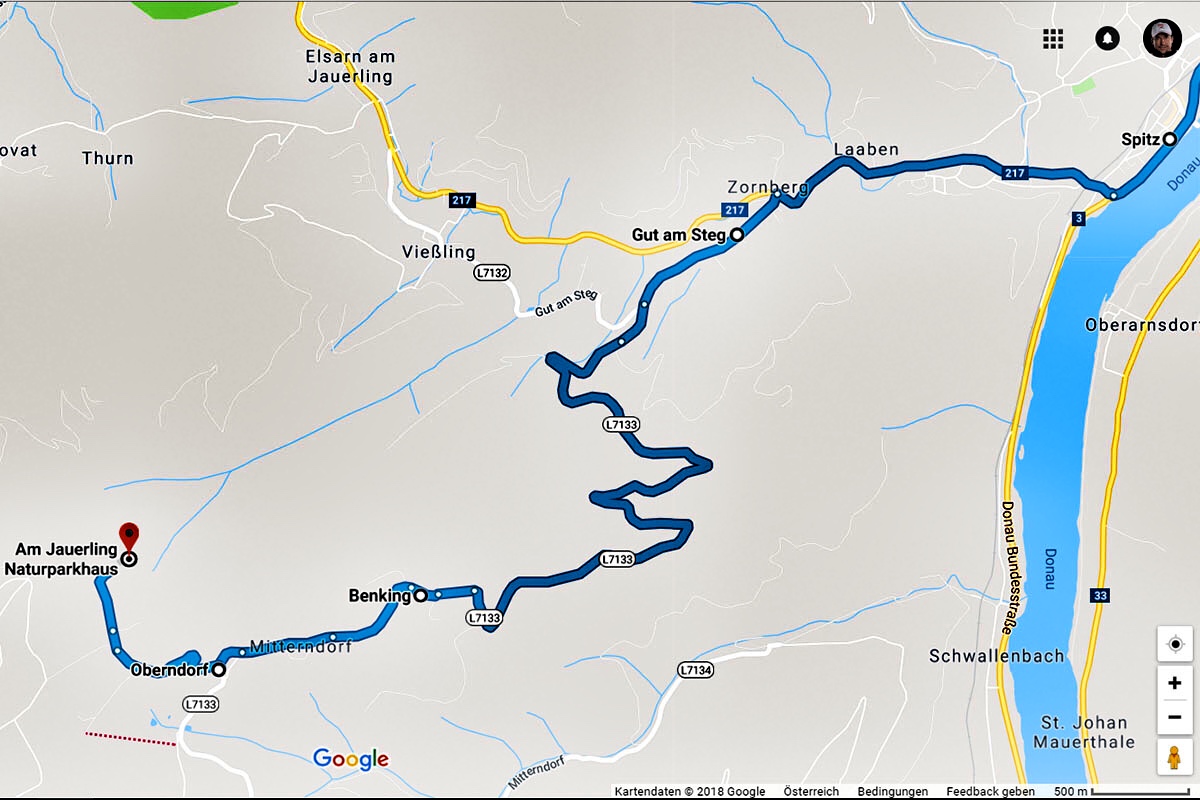 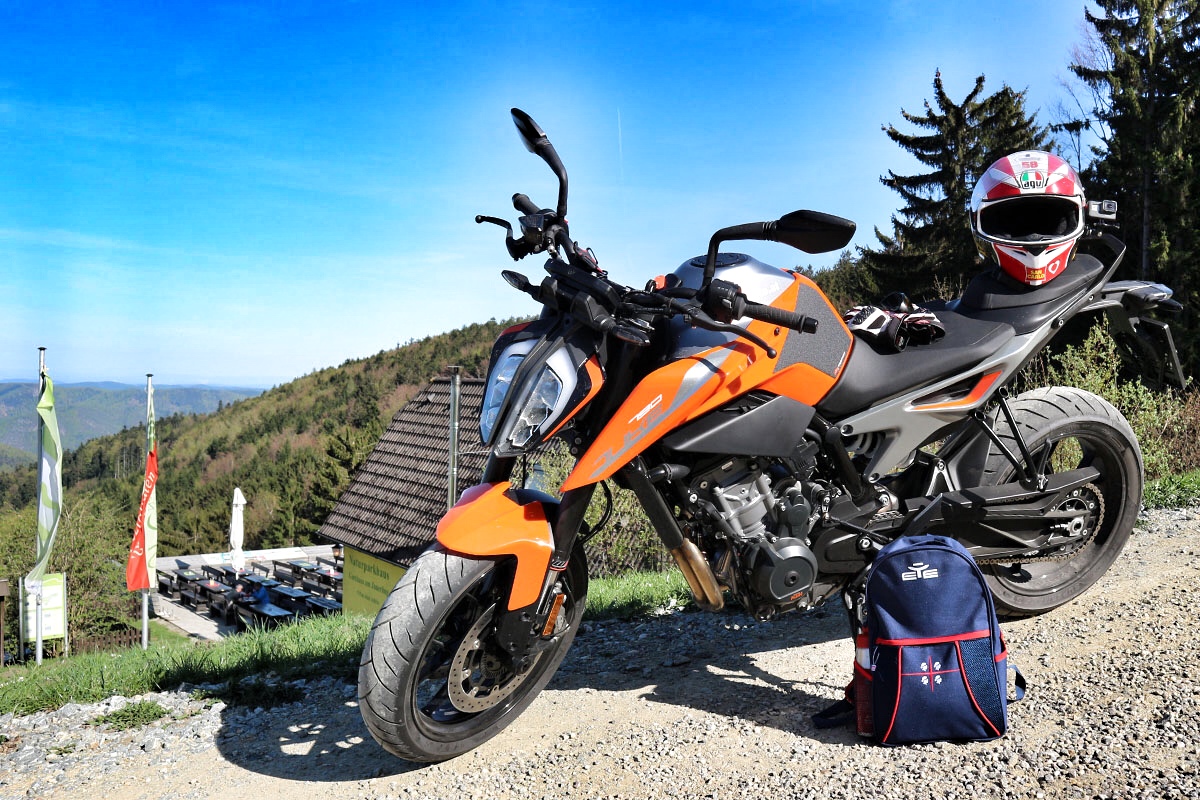 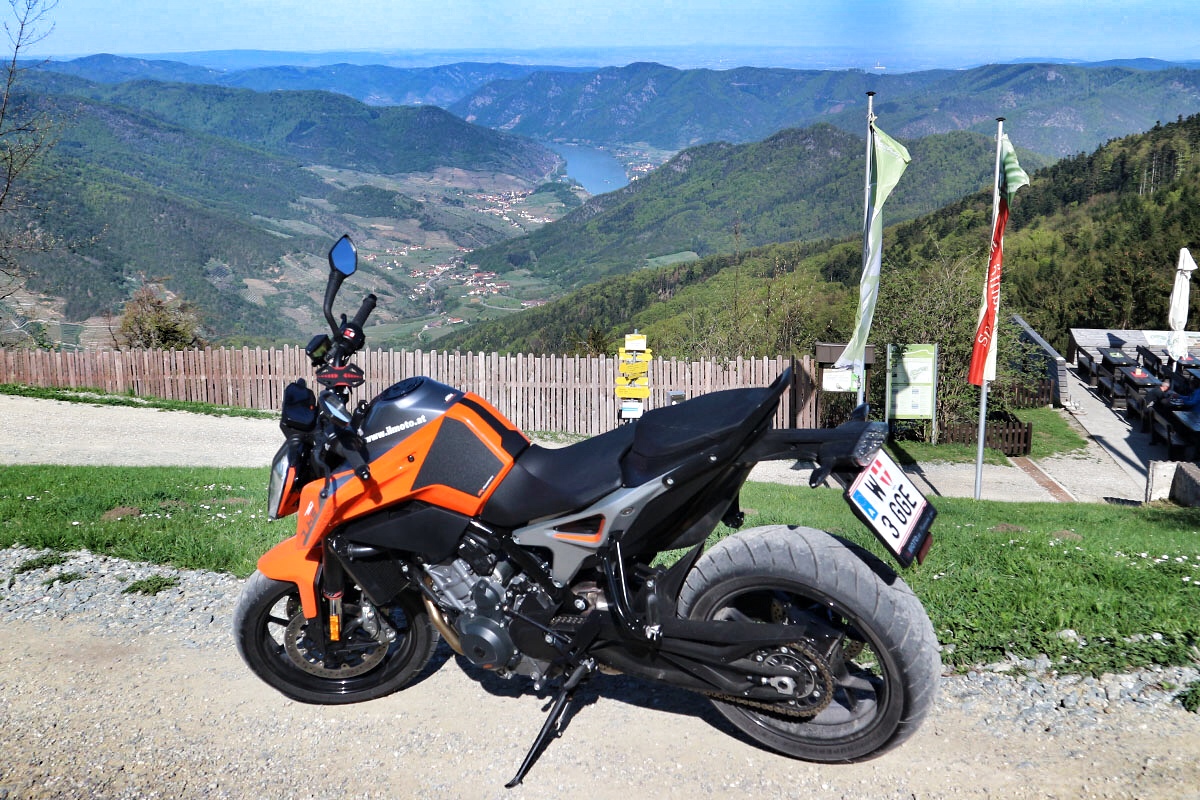 Arriving in Spitz, the route continued to the right side on the 217 to Mühldorf. After a short drive uphill I already reached Gut am Steg. Turning left there and crossing the Spitzer stream, I shortly found myself on the L7133. First driving through the village and only after that the real test track began uphill the Jauerling, 900 meters above sea level.

In the following I reached the first serpentine, becoming more and more twisting but occasionally also with longer drawn roads. As this winter brought us ice and snow until March, the street was still very dusty and laced with gravel and therefore a reserved pace was appropriate. Have a look for yourself: I invite you joining me in the following video uphill the Jauerling. Have fun!

ARMIN ON BIKE Conclusion: The Duke 790 is an overall extremely well done bike, for which KTM will surely cause considerable concern in this segment on the competitor’s side. The price-performance ratio is great, the technology is top of the range, so that the so called “Scalpel” will find many followers. The outer quality impression of the Duke does not reach the level of my Monster 821, however being way more expensive. The design is a matter of taste, but the aggressive look underlines KTM’s slogan for sure – READY TO RACE.