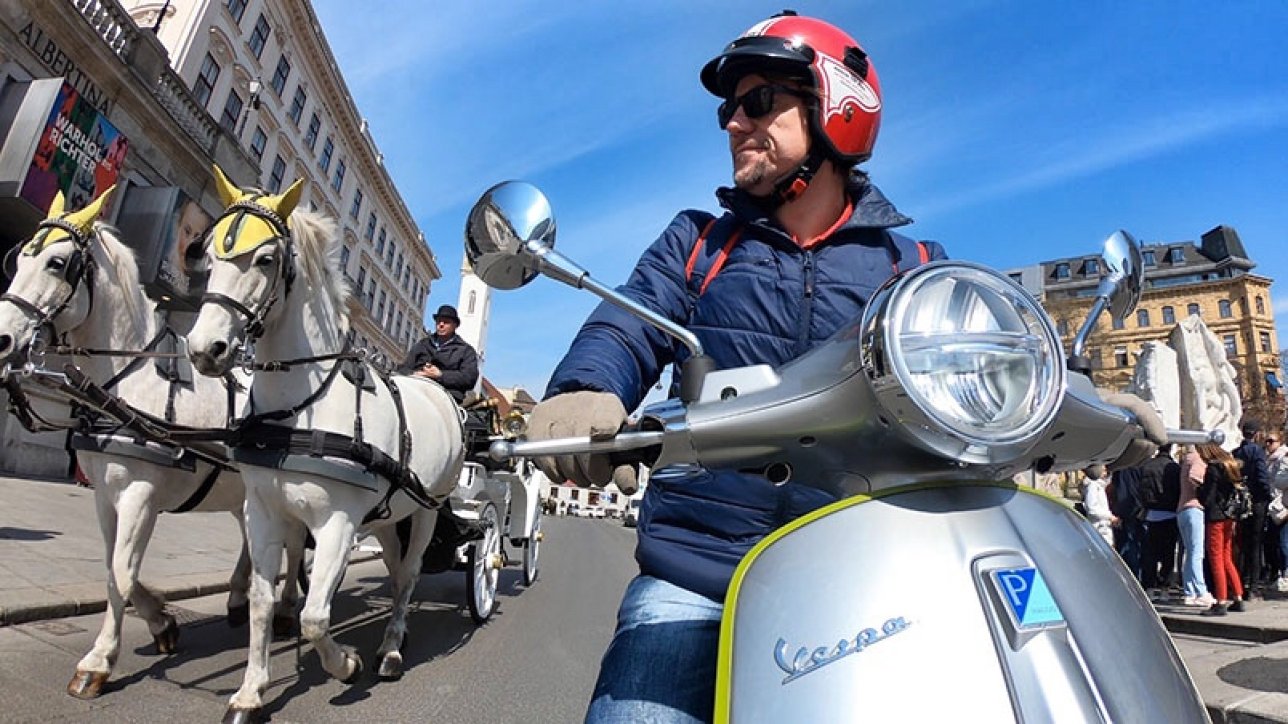 Vienna| Austria – More than 70 years after the first Vespa saw the light of day, an electric version of the cult scooter is now coming onto the market. The Vespa Elettrica heralds a new era for Piaggio, as it is the first electrically powered scooter from the traditional Tuscan company. Just arrived in Vienna, I was allowed to test it for you…

With Vespa scooters having influenced my youth, it was a very special day for me. My first motorized two-wheeler was a Vespa PK 50 S at 16, followed by a 50 Special and a 125 GTR from 1974. I’m still a big Vespa fan today, and last year I also took part in a Vespa Cross race.

The Vespa Elettrica was first shown at the EICMA in 2017, one year later the production model was shown at the Milan fair. After the first copies which were already delivered after online ordering at the end of last year, the electric Vespa has now also been delivered to the established retailers.

On this sunny day at the beginning of April I was in Vienna with the first electrically powered Vespa to test it out. It was the brand-new Vespa Elettrica in the 52 km/h version, which had only been on the market for a few days. This light motorcycle (up to 125 cm³ and 11kW) can be driven in the European Union from the age of 16 with an A1 driving licence or the B driving licence. The Vespa Elettrica is also available as a mini-motorcycle with a top speed of 45 km/h. 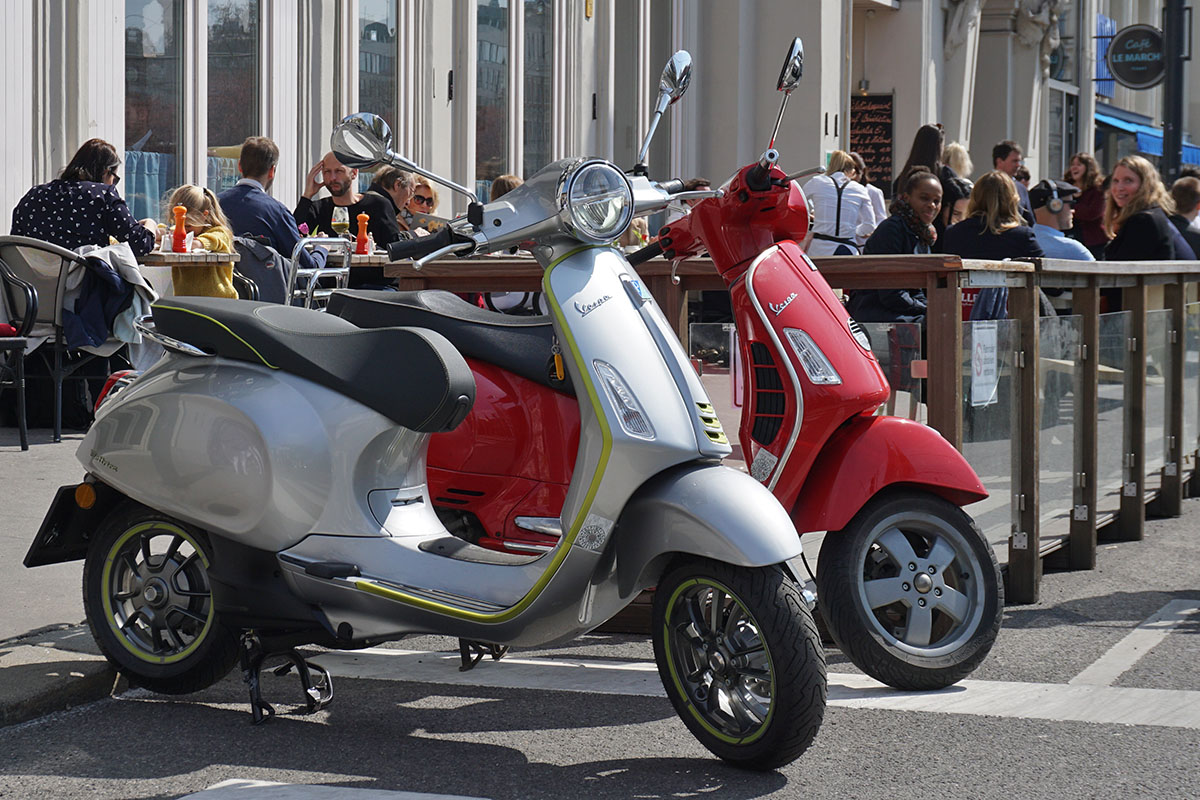 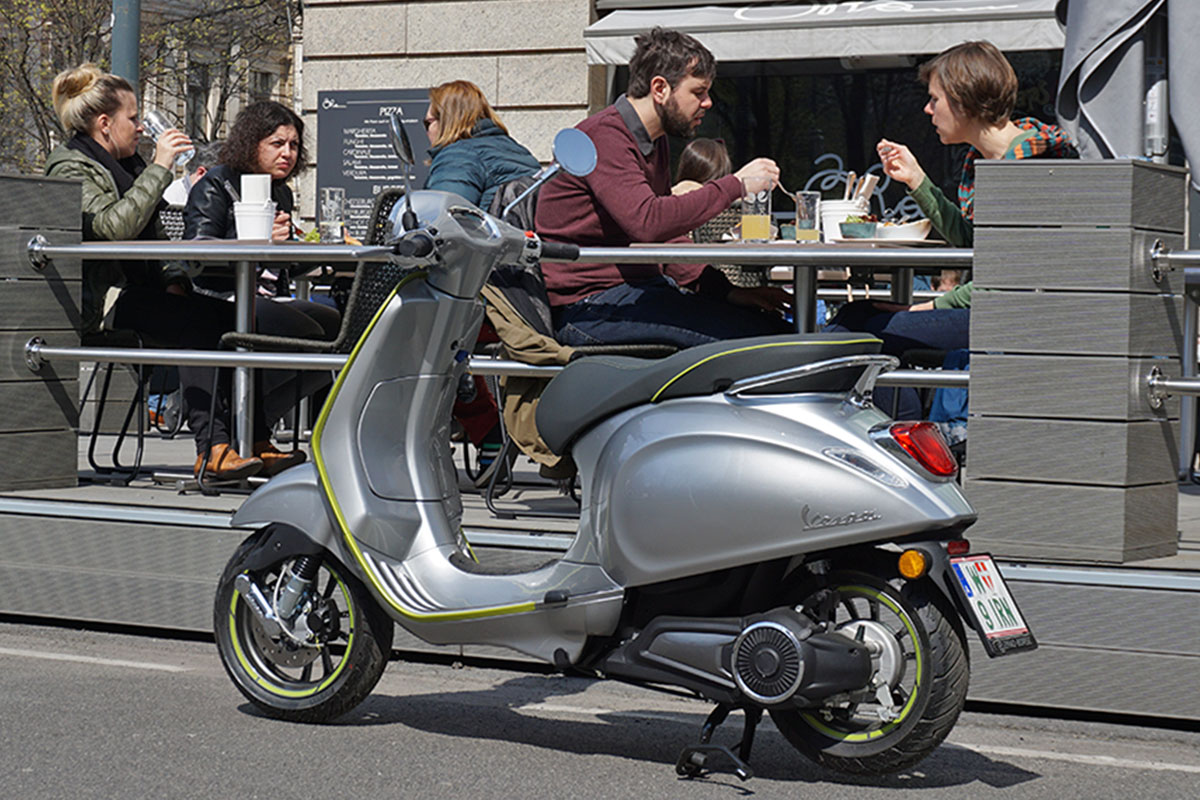 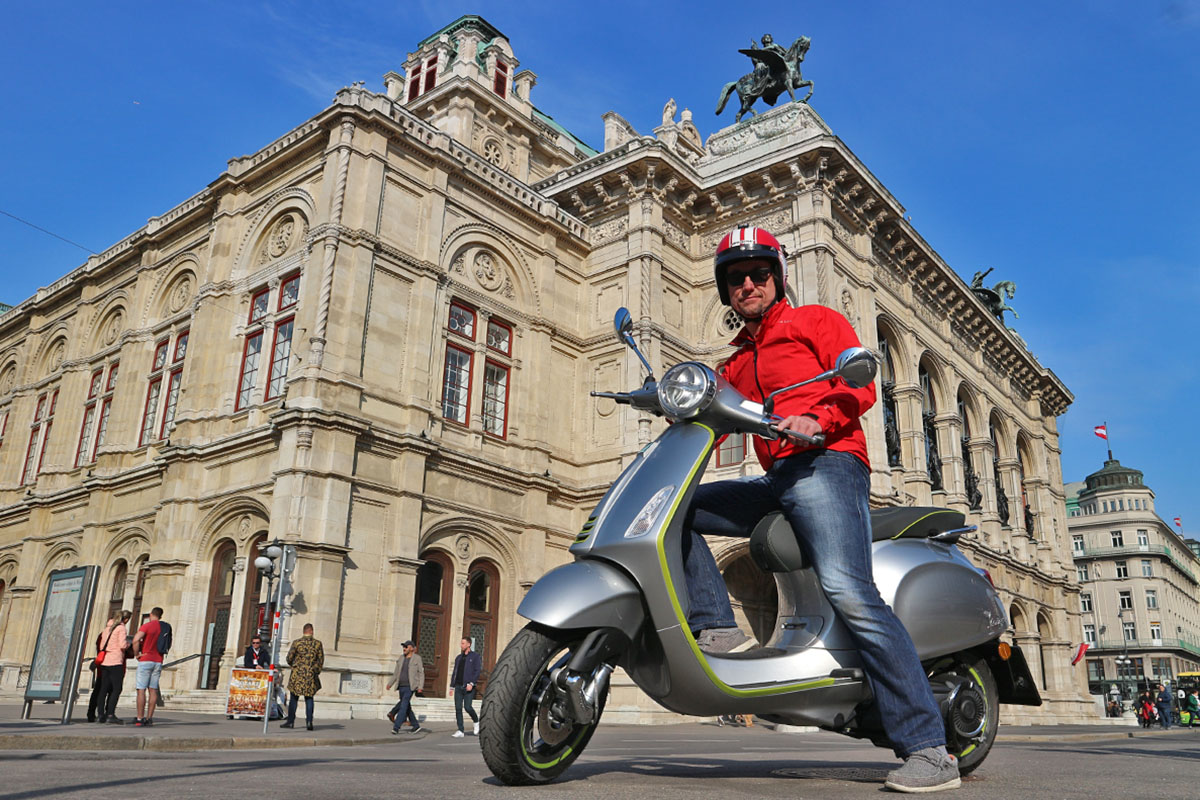 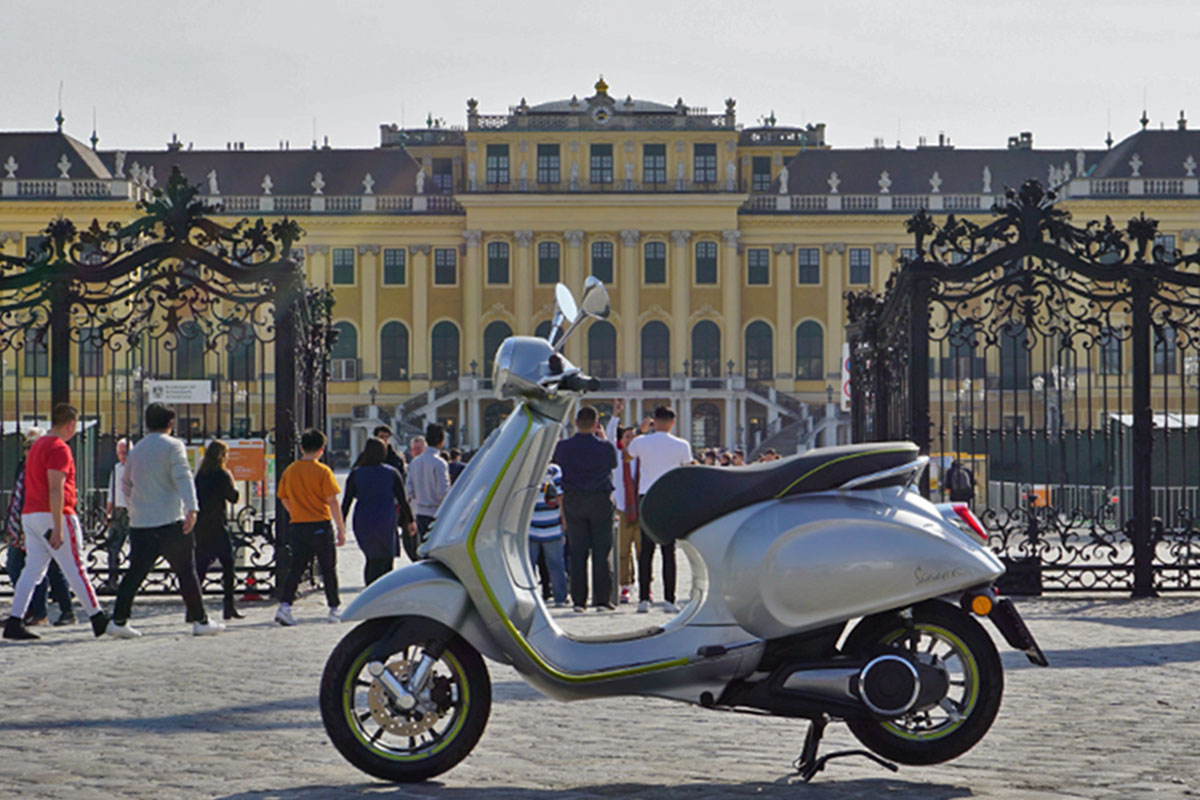 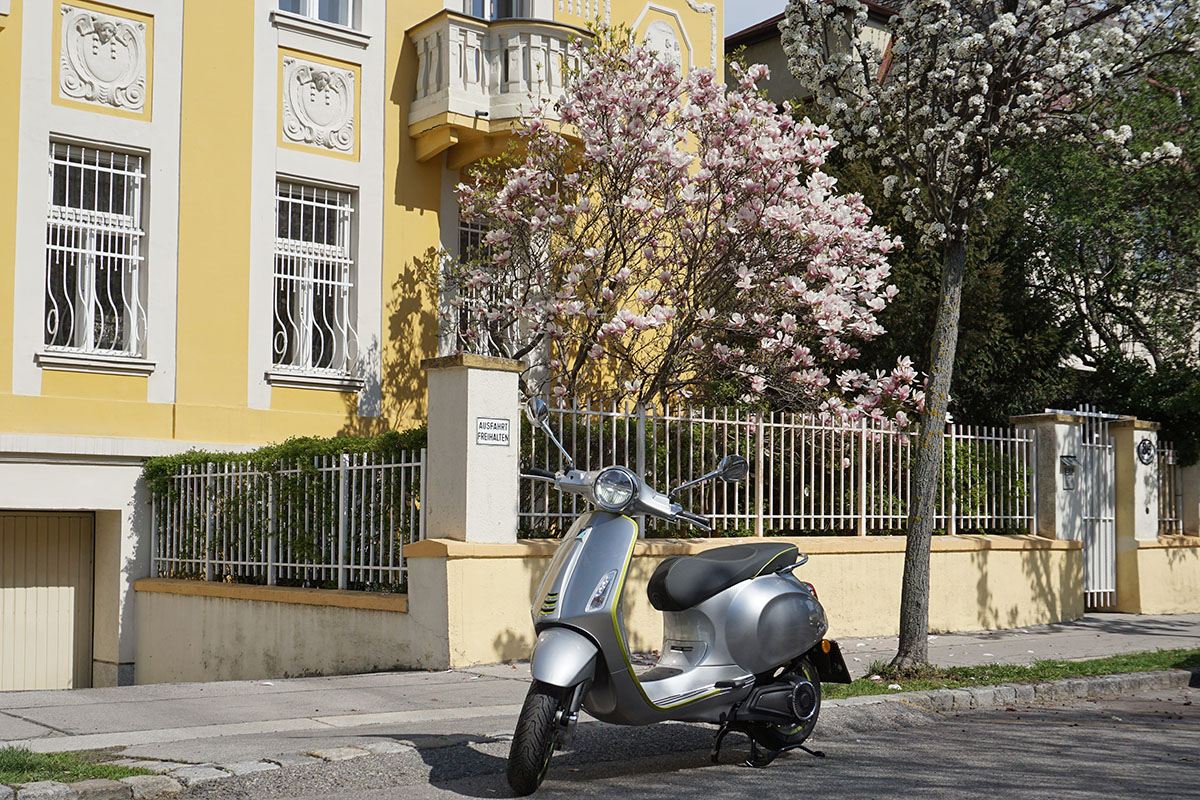 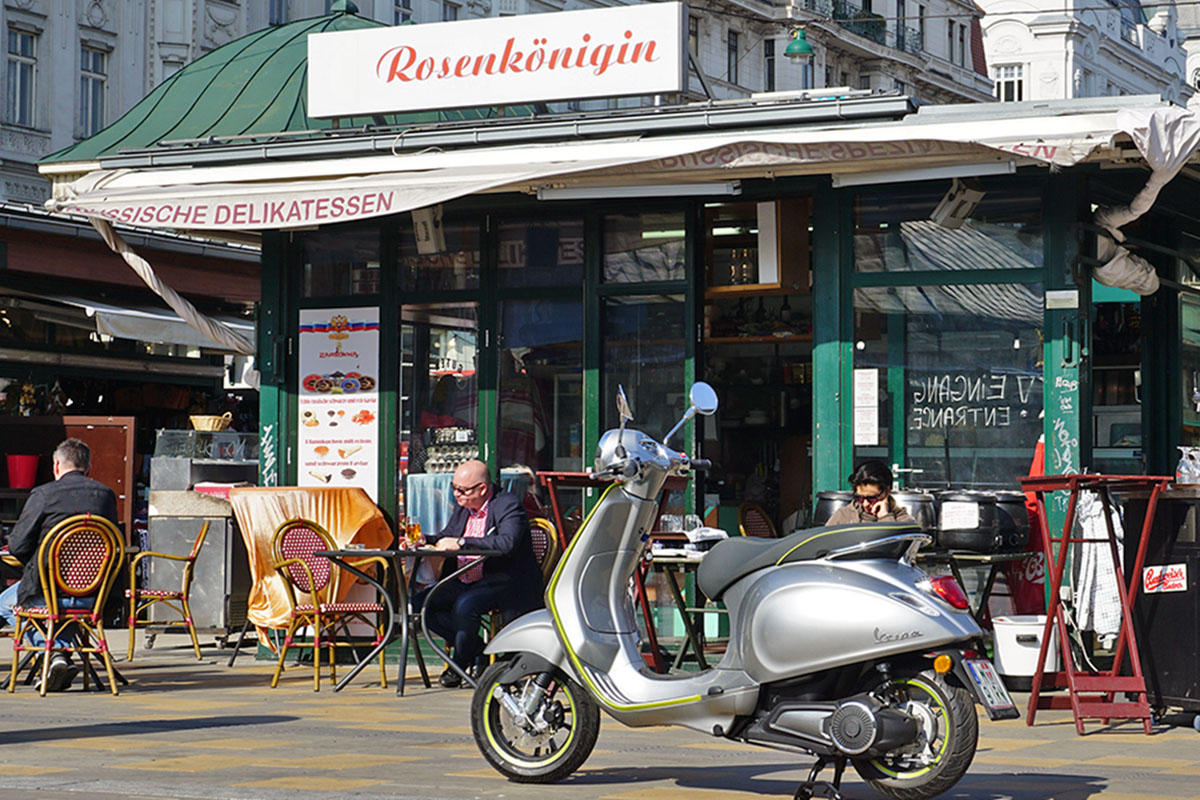 After the Vespa was briefly explained to me and I had connected it with the new Vespa app, it started. With a quiet noise that reminded me of a jet plane, the electric motor accelerated the Vespa smoothly but gently to the top speed of 52 km/h. It doesn’t sound like much at first, but not least because of the great acceleration, it’s quite enough to be able to swim well in Vienna’s city traffic. And not only that, it’s fun to glide almost silently through the city.

The Vespa Elettrica has three different riding modes. Most of the time I was riding in POWER mode, because this mode allows the maximum power of 4 kW and 52 km/h. In my test I was able to achieve a range of 70 km. The maximum range of 100 km is only possible in ECO mode, in which the maximum speed is reduced to 30 km/h.

A very funny gadget is the REVERSE mode, which moves the E-scooter backwards accompanied by a loud beep. Since the Vespa Elettrica is easy to manoeuvre even when stationary despite its weight of 130 kg, this reverse gear will probably only be used in exceptional cases. But see for yourself, the following video shows the scooter in the three riding modes.

The electric motor of the Vespa Elettrica has 2.5 kW continuous power and 4 kW peak power. The permanently installed 25 kg lithium-ion battery with integrated energy recovery system and a capacity of 4.2 kWh is convenient for the centre of gravity directly under the helmet compartment and therefore does not impair the storage space. As usual, there is room for a jet helmet or small backpack. The battery is 80% charged in three hours at a household socket, after four hours 100% are reached.

The charging cable with Schuko plug is integrated directly into the Vespa and is located under a small cover. This must be properly locked again after charging so that the Vespa can be started. The remaining charging time displayed corresponded very well to reality in my test. In the front part the scooter has another small storage compartment in which there is also a USB charging plug. 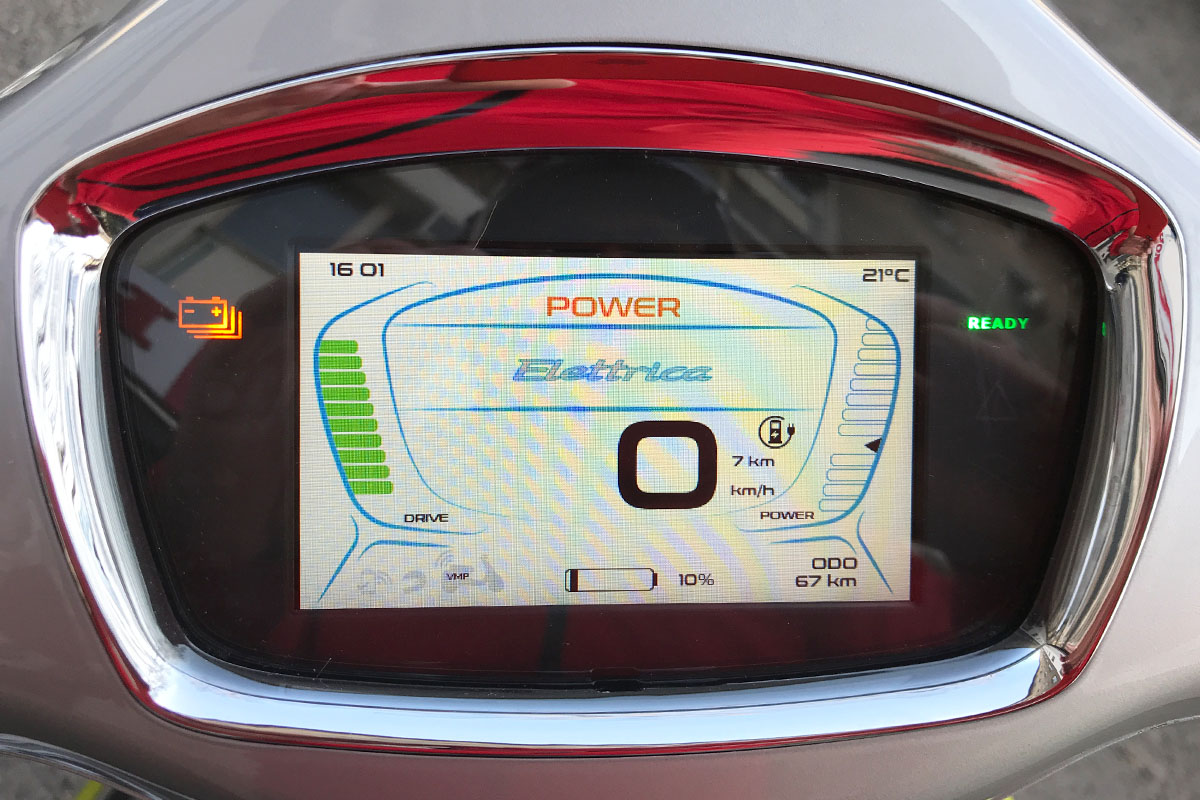 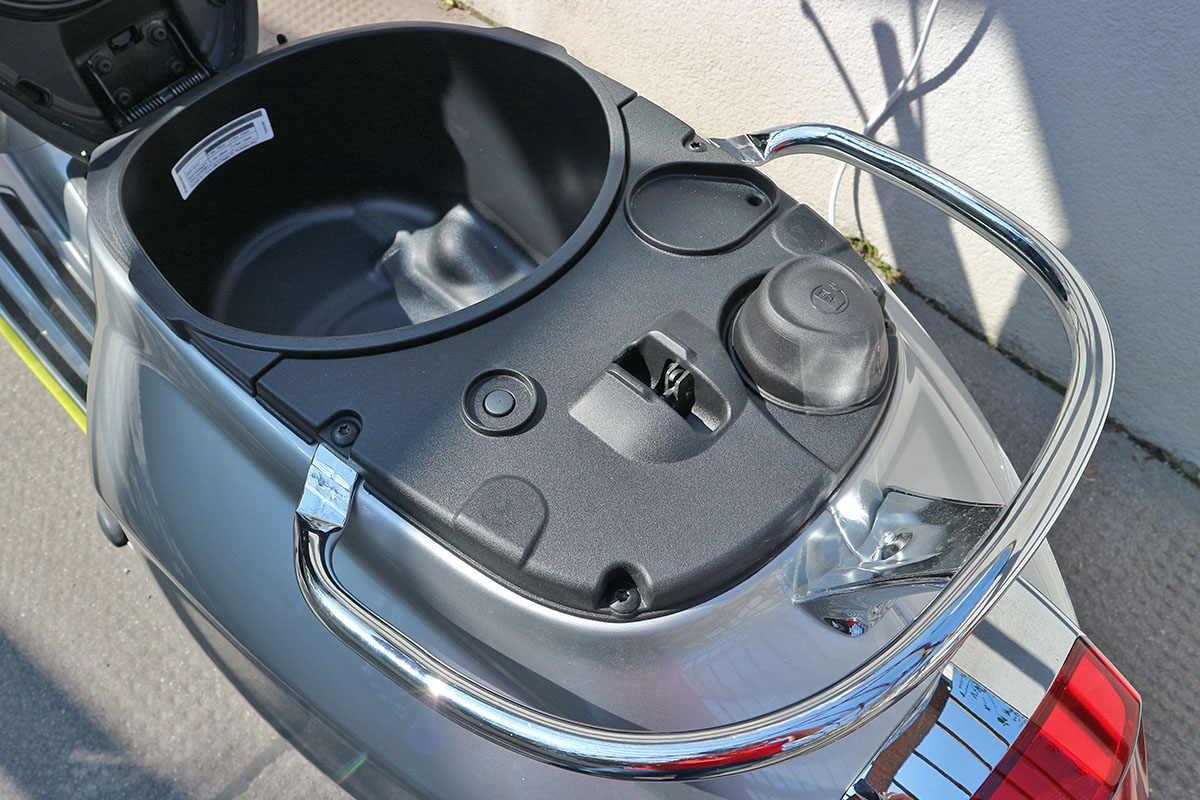 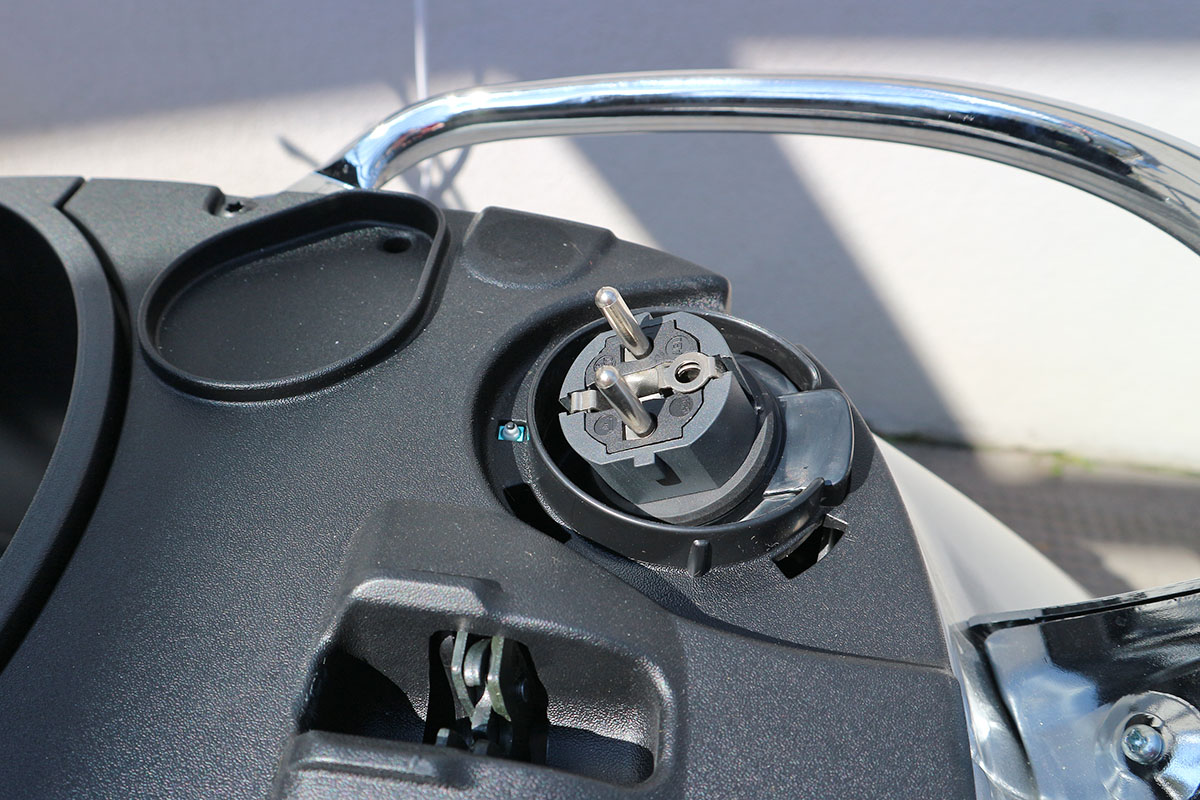 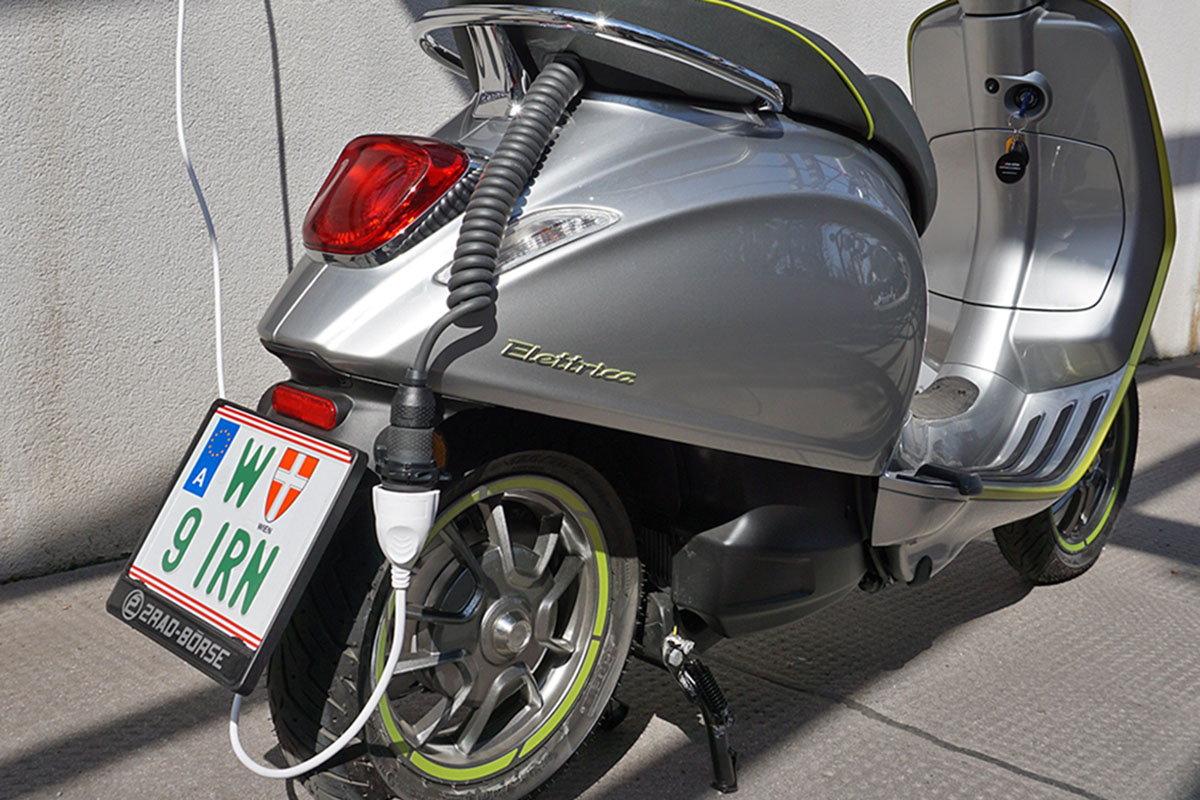 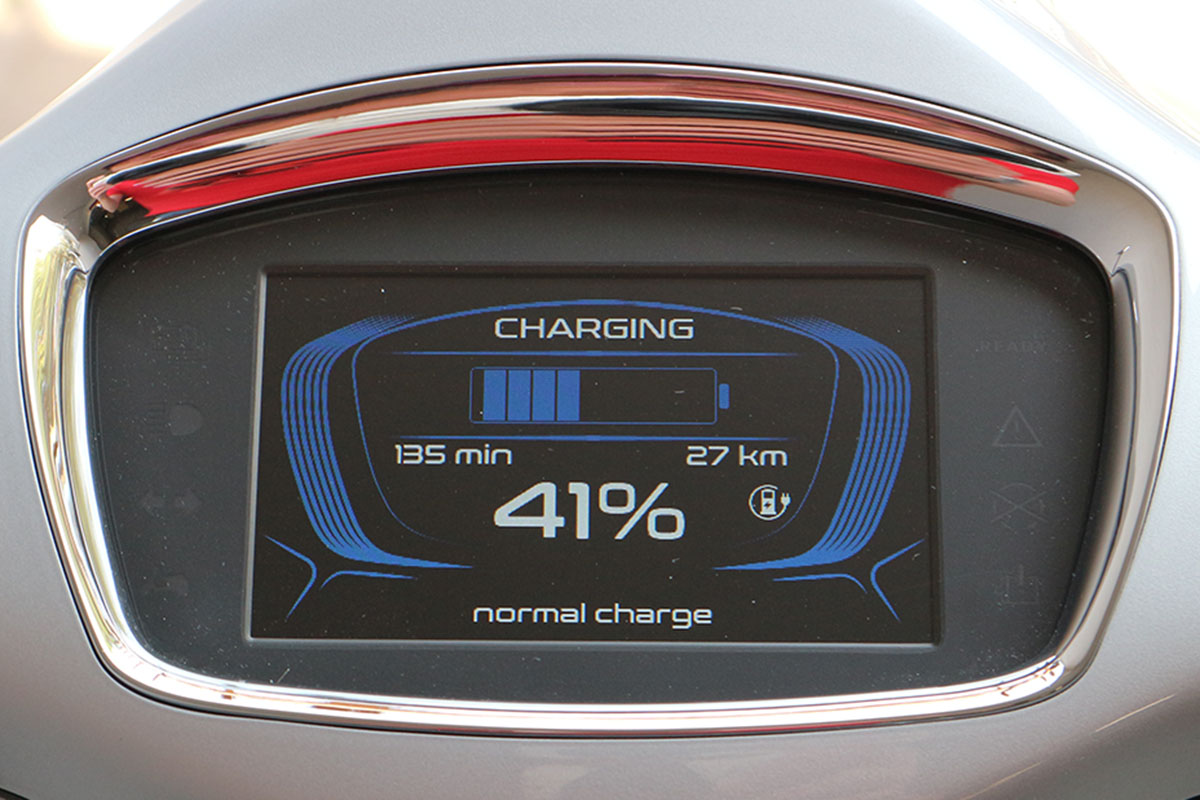 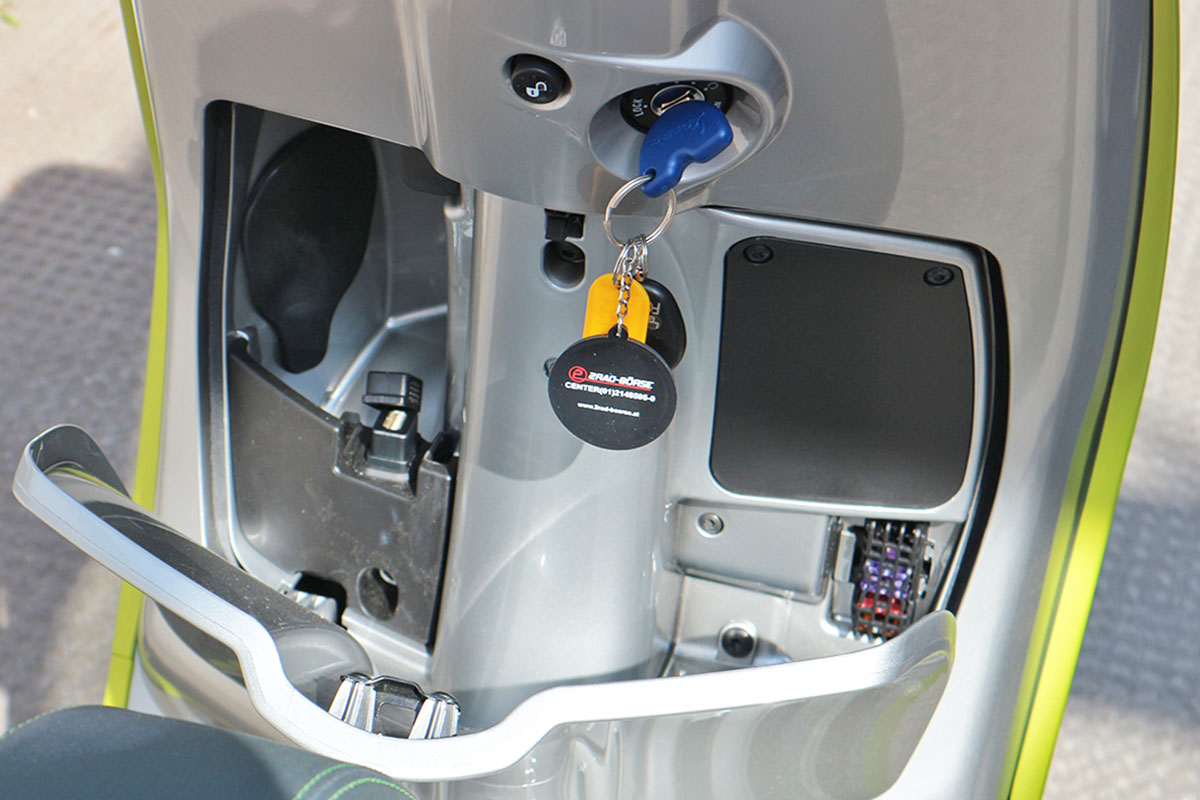 FULLY CONNECTED WITH THE VESPA APP

The Vespa Elettrica has an easy-to-read 4.3-inch colour TFT display that shows all the necessary driving parameters. In addition, the new Vespa app allowed me to connect my iPhone to the electric scooter via Bluetooth. The Vespa Mia system enables the full connection between two-wheeler and smartphone.

In addition to recording various driving statistics and live tracking of the current driving parameters, it is also possible in combination with a hands-free system to accept calls directly on the handlebars, display notifications or control the music selection. Snapshots can be spiced up with effects matching the Vespa and then shared directly via the app in the social media.

The silver Vespa Elettrica is optically a real Vespa and therefore undoubtedly a timeless beauty. The design elements of my test vehicle in the colour “Giallo Lampo” give it a particularly modern touch that fits well with the new technology. With a weight of 130 kg, the Elettrica is not a lightweight in the electric scooter segment, but everything is of a very high quality. Piaggio’s decades of experience can be seen in the extremely well-balanced chassis, and even inner-city noise thresholds won’t upset the scooter. The new Vespa is also state of the art in terms of connectivity.

The advantage that the entire charging technology and the charging cable are integrated in the vehicle is offset by the disadvantage that the battery cannot be removed for charging in the home or office. This will make the use of the scooter more difficult for many, especially in urban areas. The comparatively high price of around 6,500 euros (price varies slightly depending on the country) is not a bargain. But for that you drive a real Vespa and that is something very special.