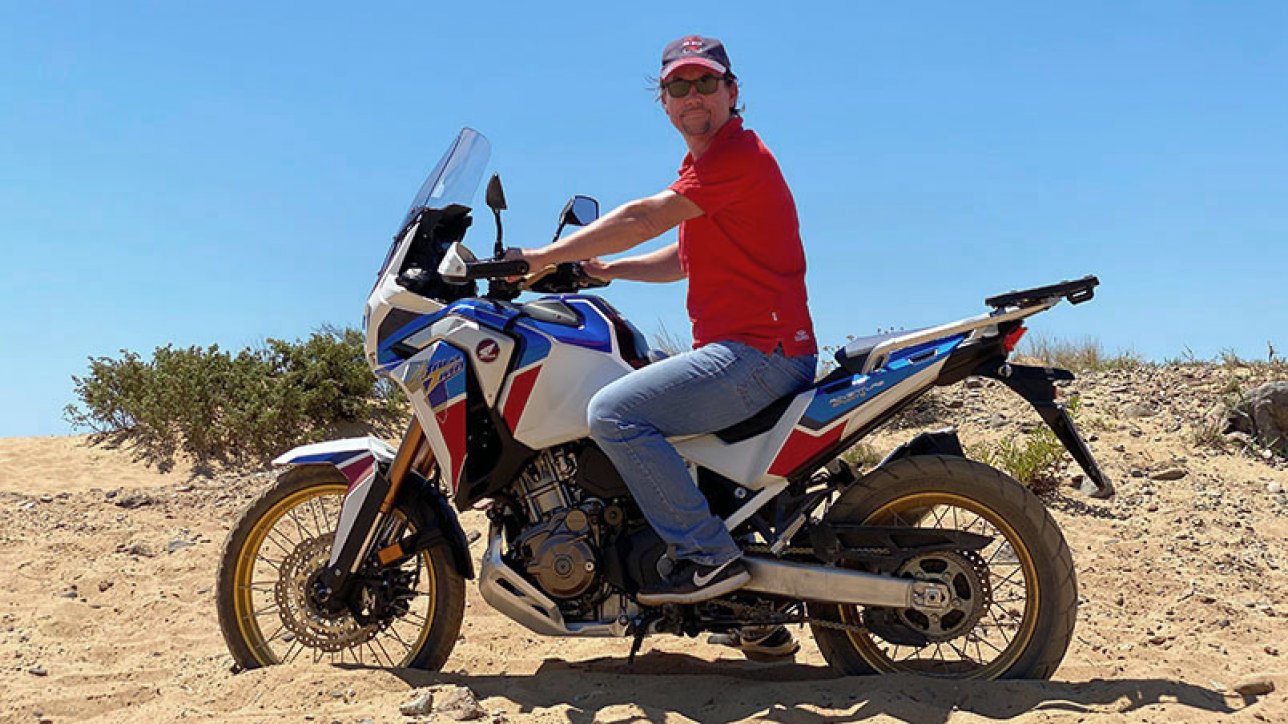 Costa Verde | Sardinia – This year the Honda Africa Twin is getting an extensive upgrade. This was reason enough for me to test the new edition of the successful adventure bike on the partially rough roads of south-west Sardinia. The adventurous tour lead me to the dunes of Piscinas…

The official Honda motorcycle dealership for Cagliari, Motostore Srl, let me take the Honda CRF1100L Africa Twin Adventure Sports ES DCT for a day. The bike in question was the variant of the adventure touring bike equipped with the dual clutch transmission and electronic chassis (SHOWA EERA). After a short explanation of the bike by Rossano I set off west. As a testing site I’d picked out the undisturbed Costa Verde, with its unsurfaced roads and vast sand dunes it offered an appropriate playground for an adventure bike like the Africa Twin. 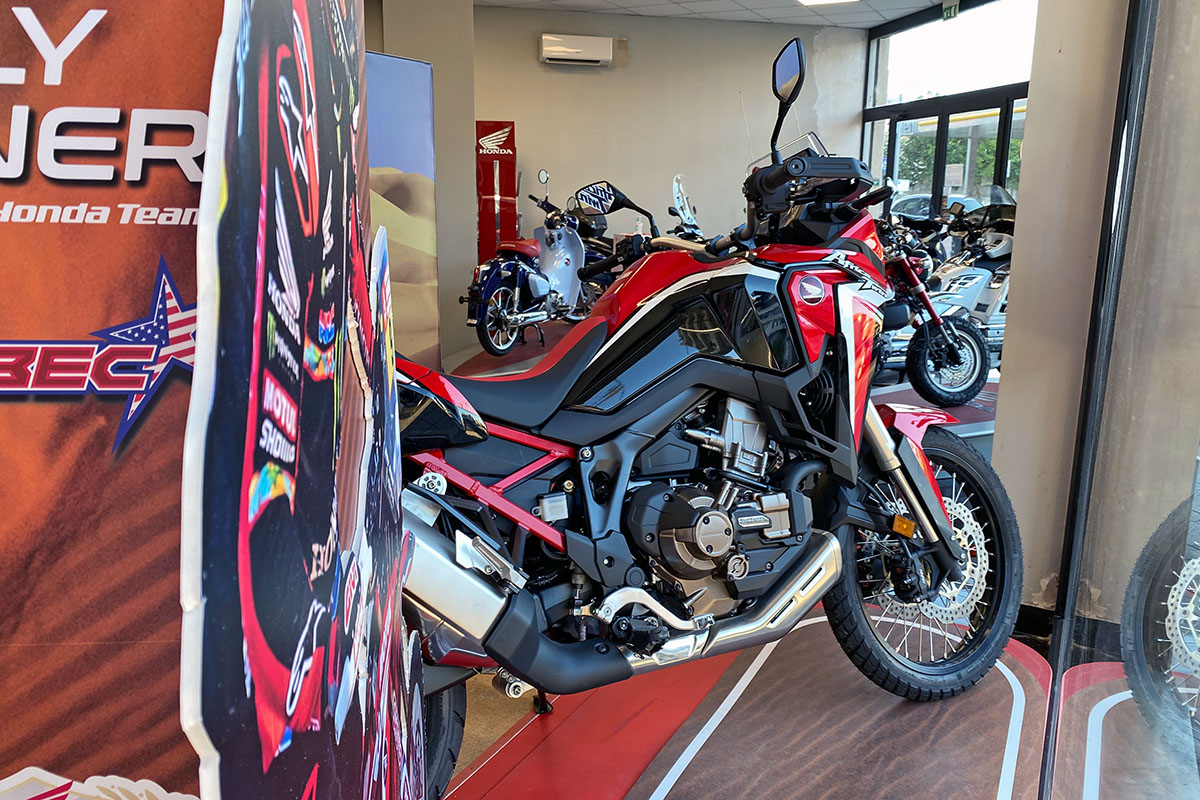 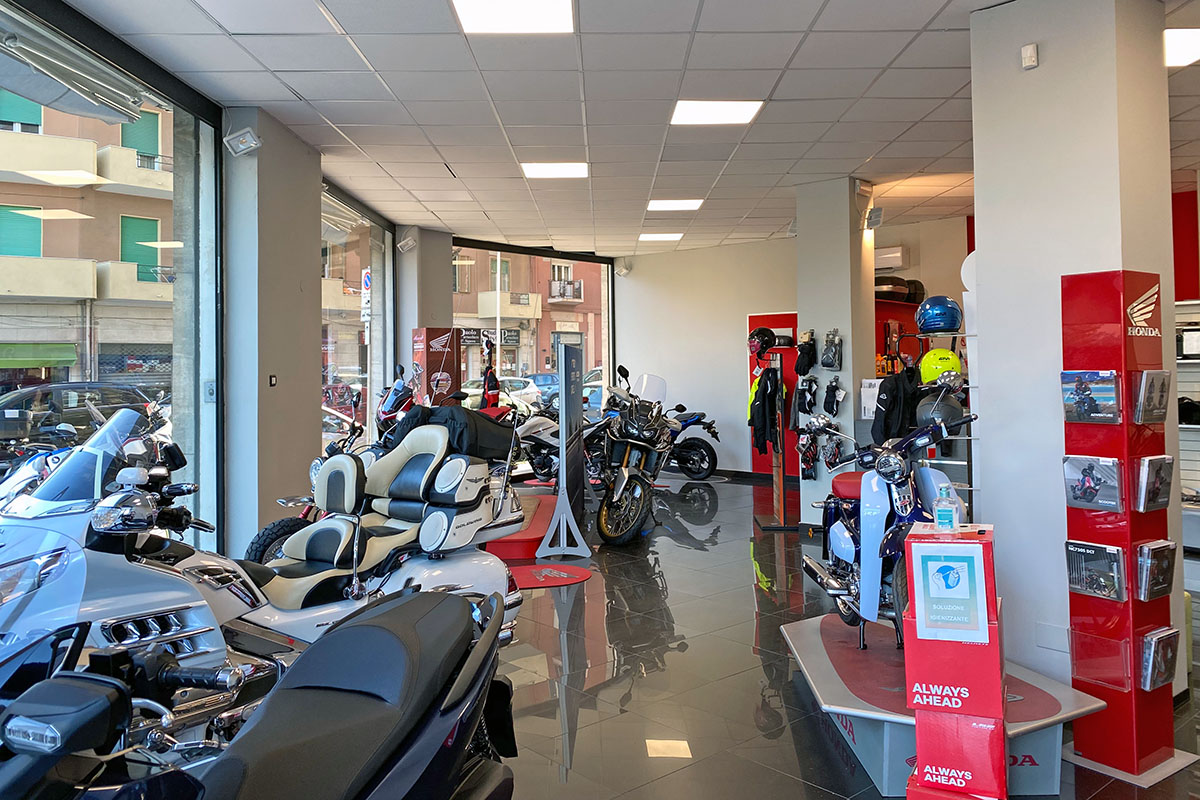 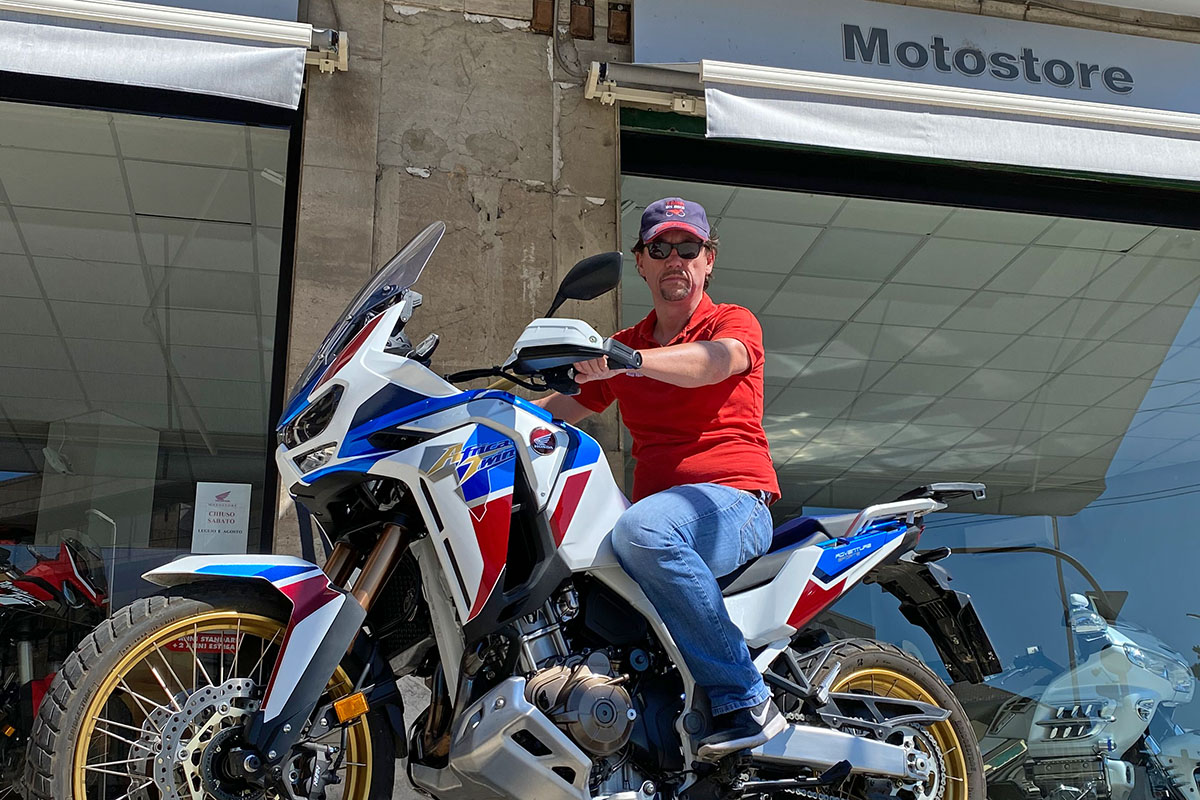 The ride up to Arbus was on pretty straight stretches of road. It gave me the time to get to grips with the Africa Twin’s Dual Clutch Transmission (DCT), which works with no change- or clutch levers whatsoever. The automatic transmission works as follows: when starting up the motorbike the transmission is in the “N” setting. With the central toggle switch on the right handlebar arm you switch, at first, to the drive function “D-S” and then just start riding by twisting the throttle.

In AT-mode (automatic transmission) you can choose between “D” and three degrees of “S” which each influence the shifting point. From very early changes in “D” to very late changes in “S3”. The level of “S1” in the middle turned out to be the perfect setting for me. The change-ups were smooth without any juddering, also the change-downs during sharp braking were second to none.

As soon as I got off-road, I operated the “A-M” controls to change to MT-mode (manual transmission). By doing this it meant it was possible for me to change gears up and down myself at the left-hand lever using my index finger and thumb. This worked every time without issue as well and gave me a sense of security riding off-road. 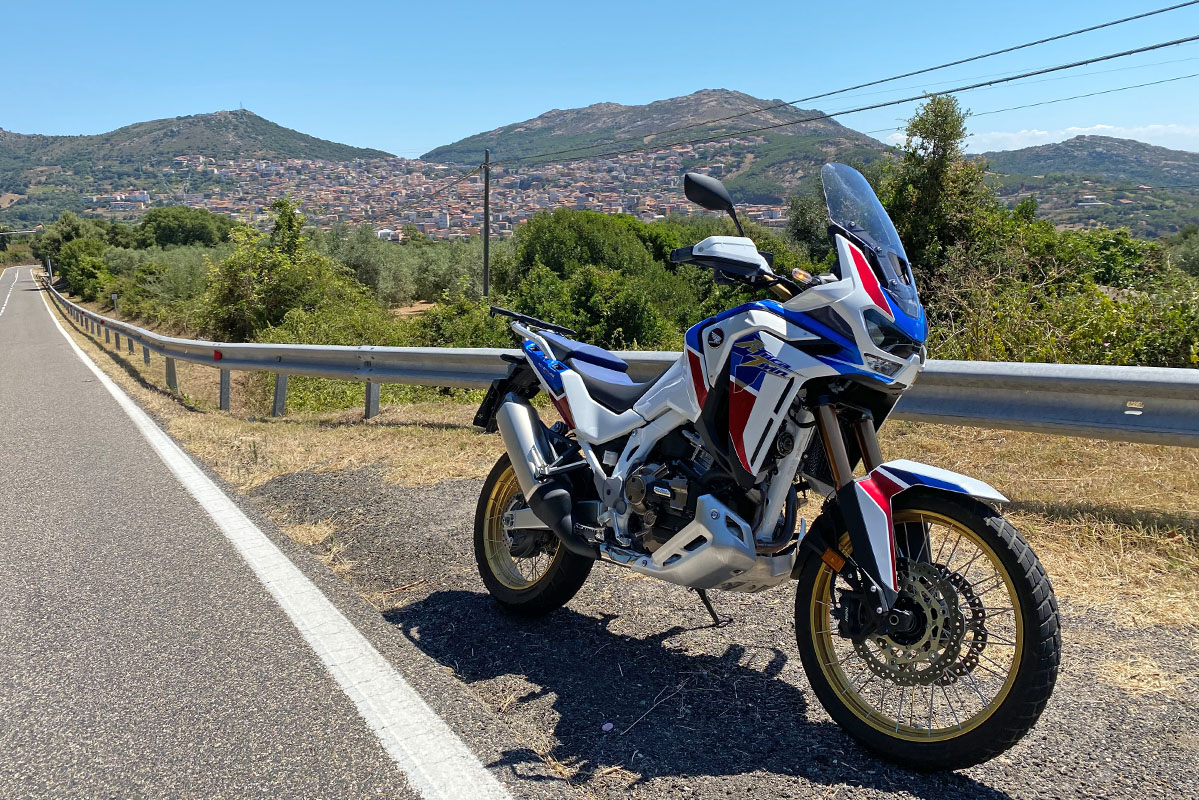 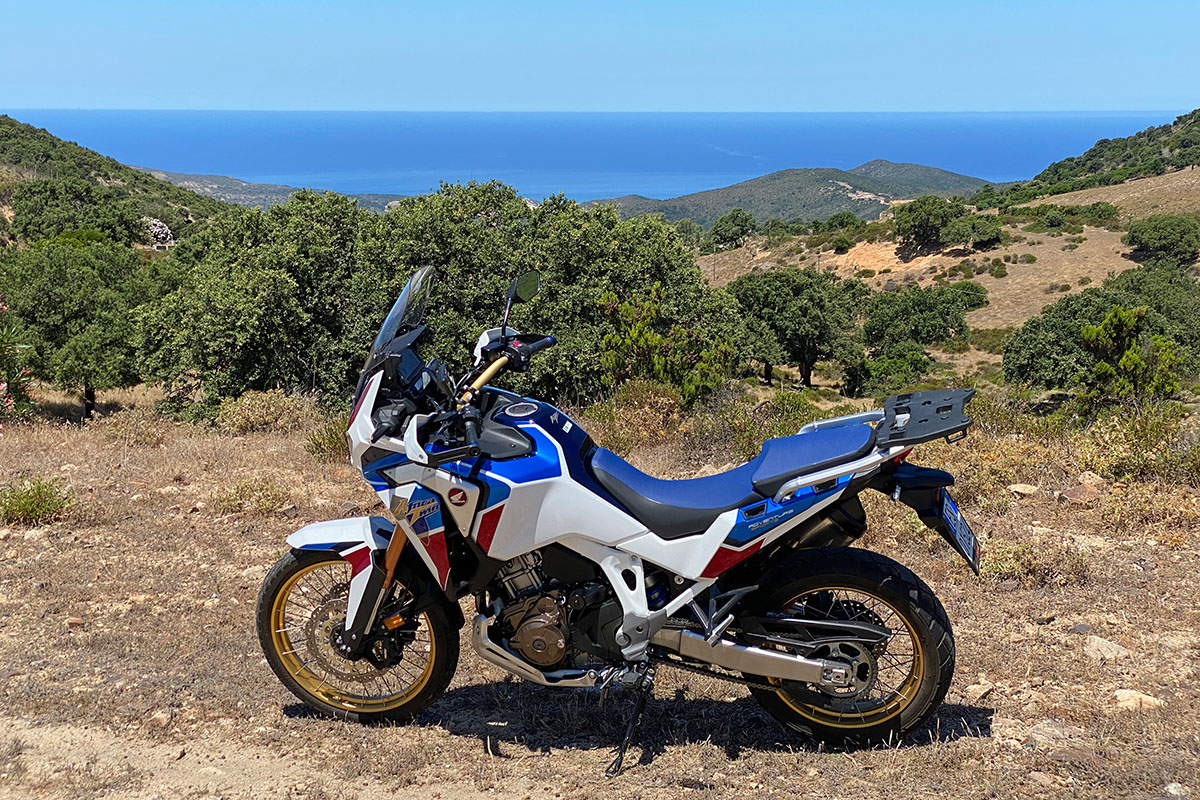 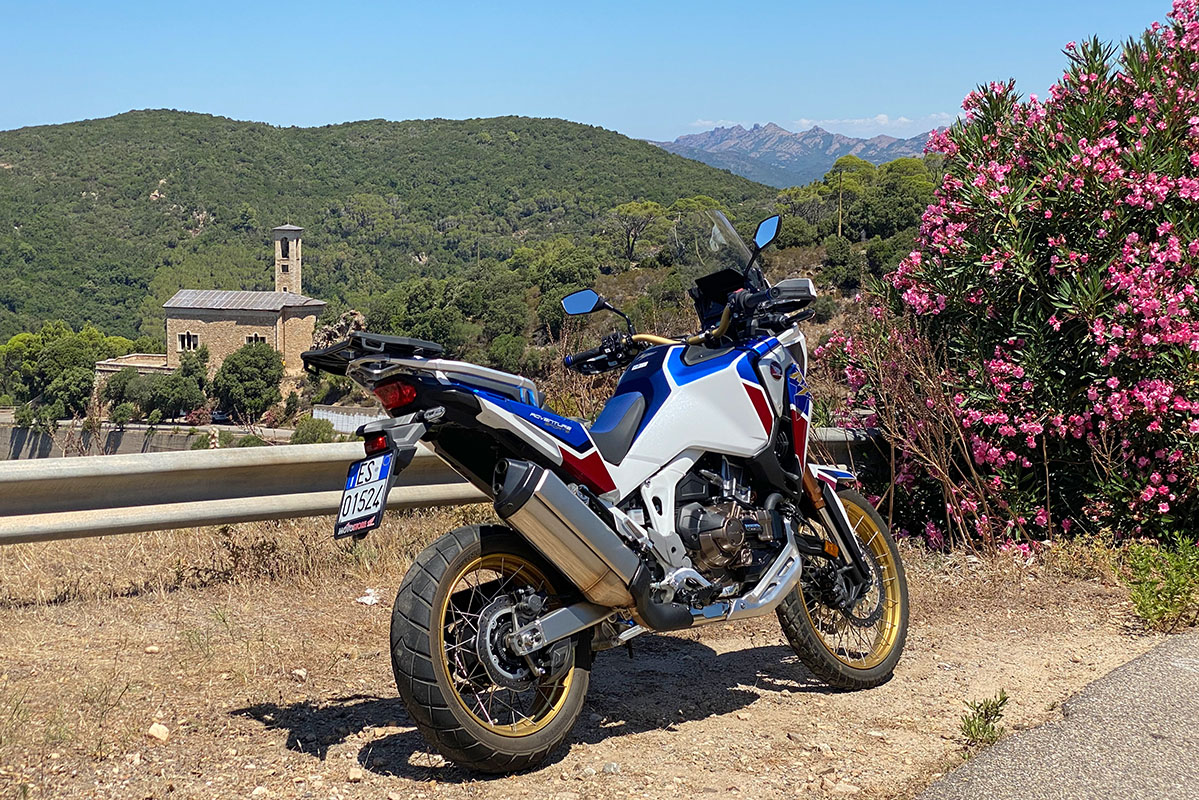 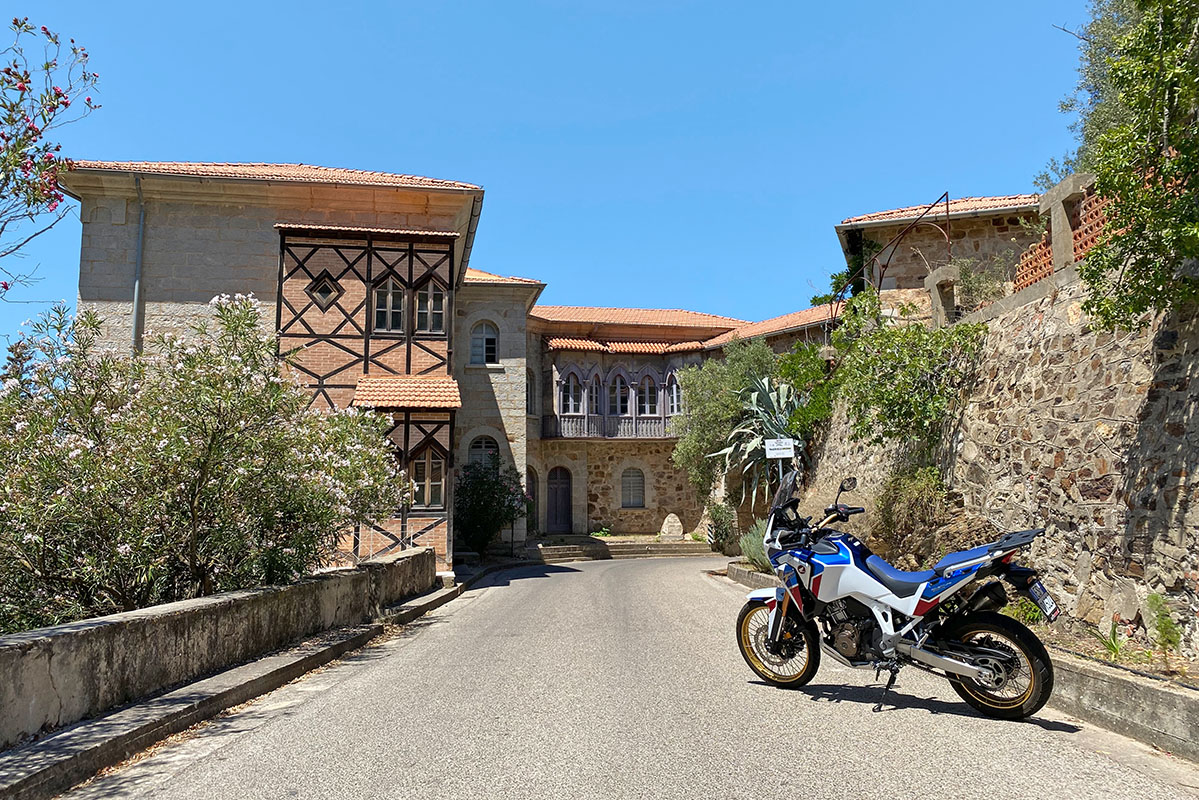 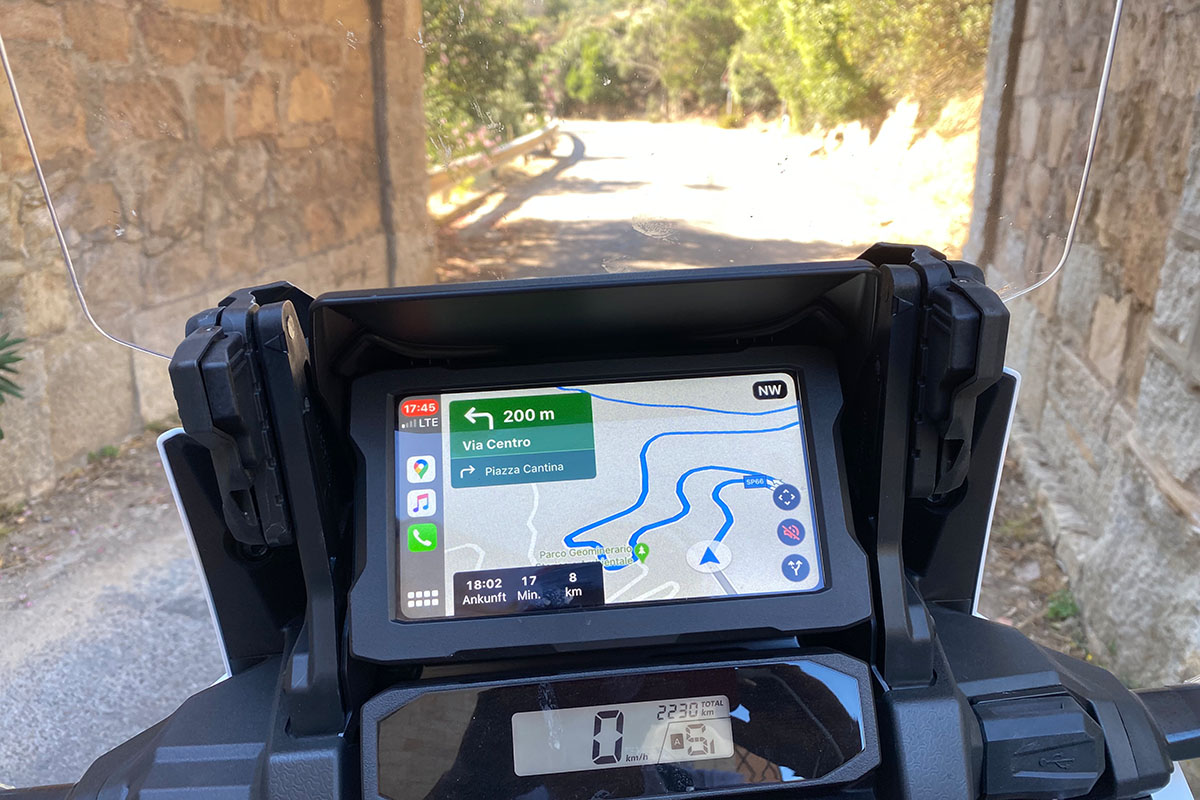 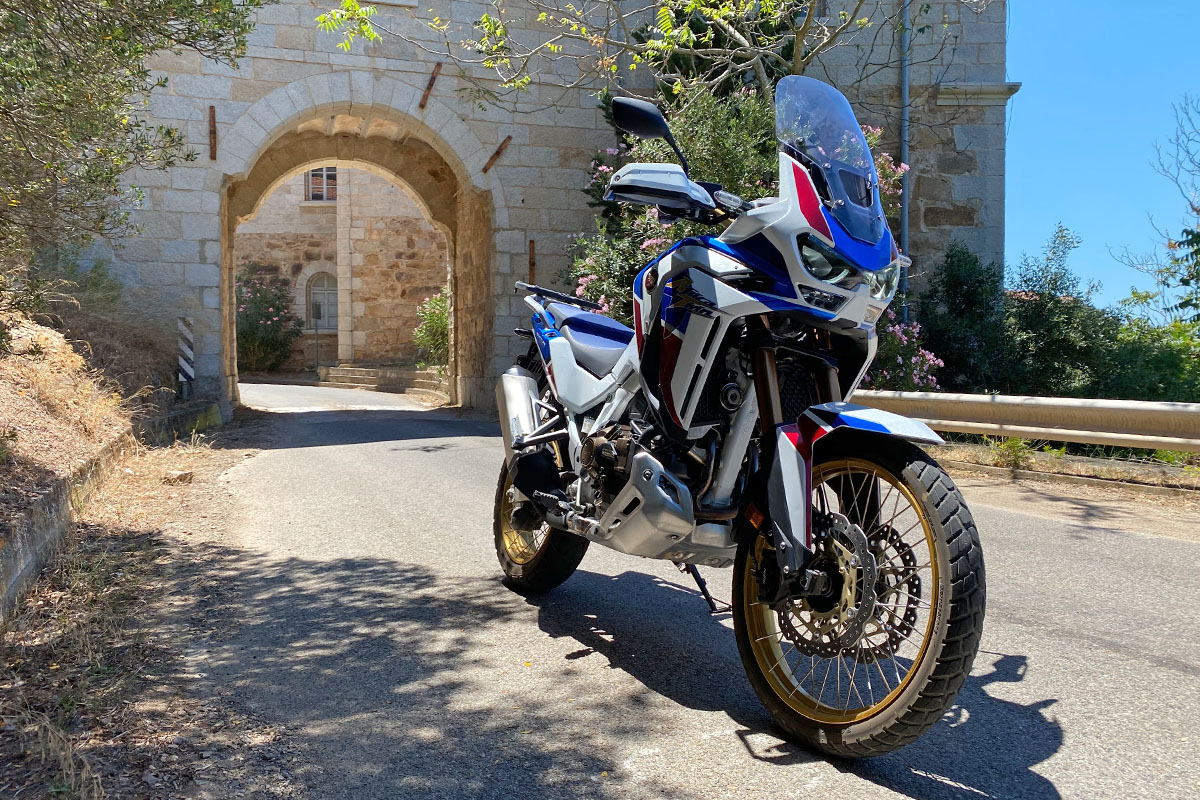 THE FORMER MINING VILLAGE OF INGURTOSU

The meandering portion of my journey began at Arbus. The Africa Twin turned in readily and could move very agilely around tight winding bends, despite its specified weight of 250 kg. After 8 kilometres I turned right off the SS126 towards Ingurtosu. Shortly before reaching the village I got my first glimpse of the Mediterranean. The area developed from the middle of the 19th century into an important mining centre. In the Gennamari and Ingurtosu mines they extracted lead, zinc and silver. The central structure is the “Palazzo della Direzione”, renovated in 2001, in which the mines’ administration was located.

The peak of its activity was reached in the first half of the 20th century with around 2500 workers, today, however, Ingurtosu is an abandoned village. A multitude of ruins from the old days are left standing along the road towards the sea. The biggest is found in the district of Naracauli and is originally an ore washing plant, which from 1900 was purposed for washing and separating rock. The tarmacked road also ends there and carries on, unsurfaced, towards the beach.

It’s also possible to use your iPhone with Apple CarPlay on the Africa Twin’s 6.5 inch colour TFT touchscreen, you can connect your phone to the bike via a USB cable. I used it to navigate with Google Maps. What put me off was that this was only possible in combination with a connected Bluetooth-headset, which I wouldn’t have needed for navigation. It struck me as detrimental that while using Apple CarPlay, important information, such as rpm and fuel contents, weren’t shown on the display. 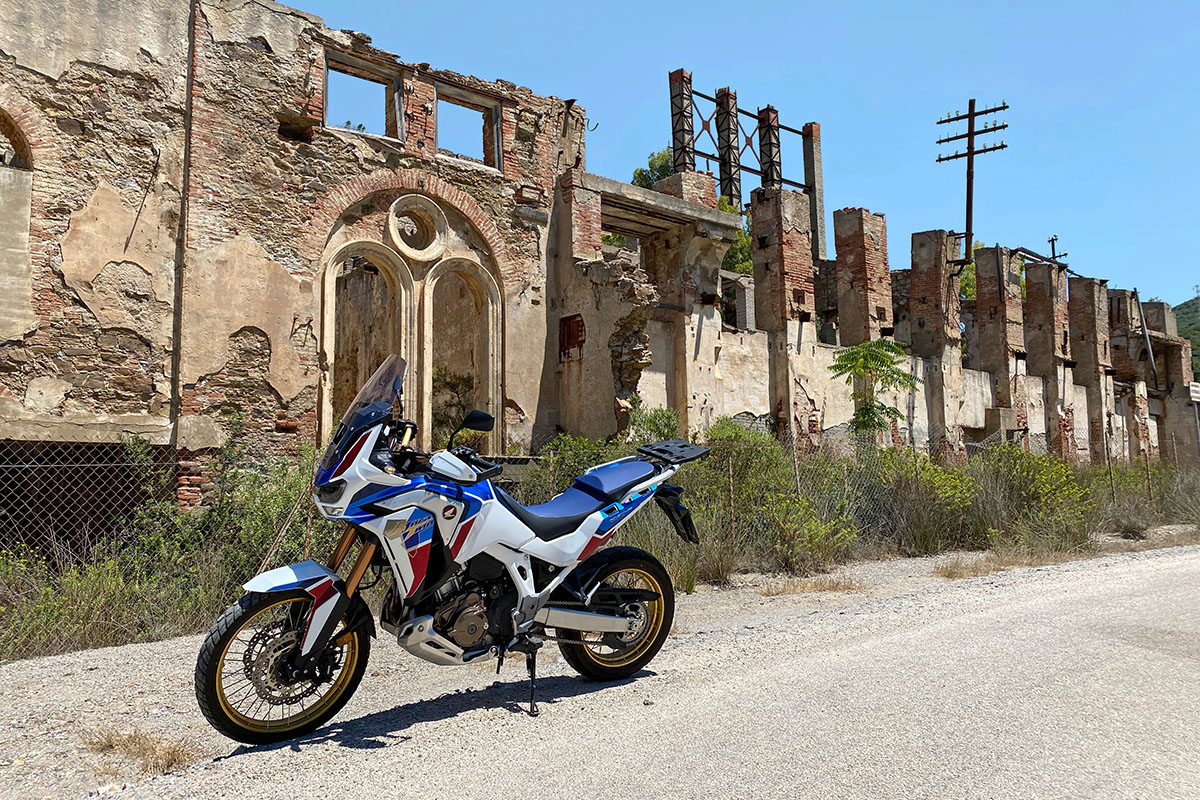 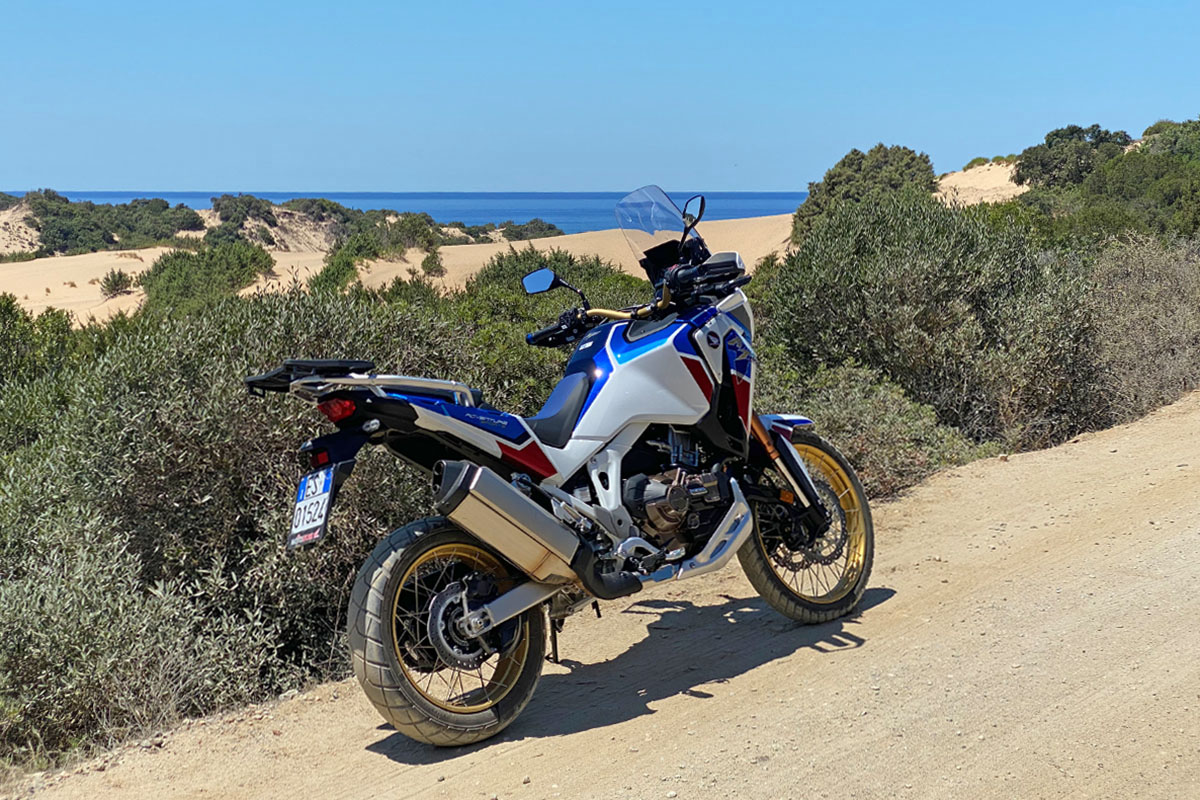 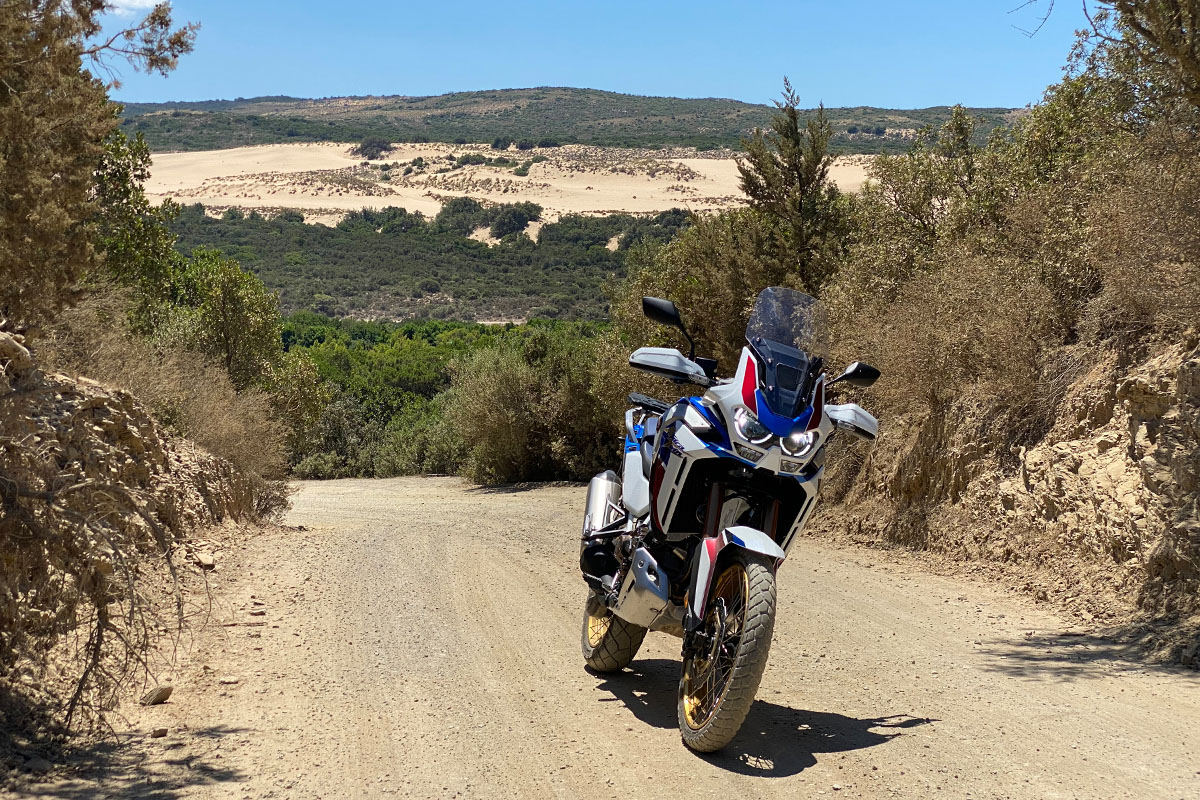 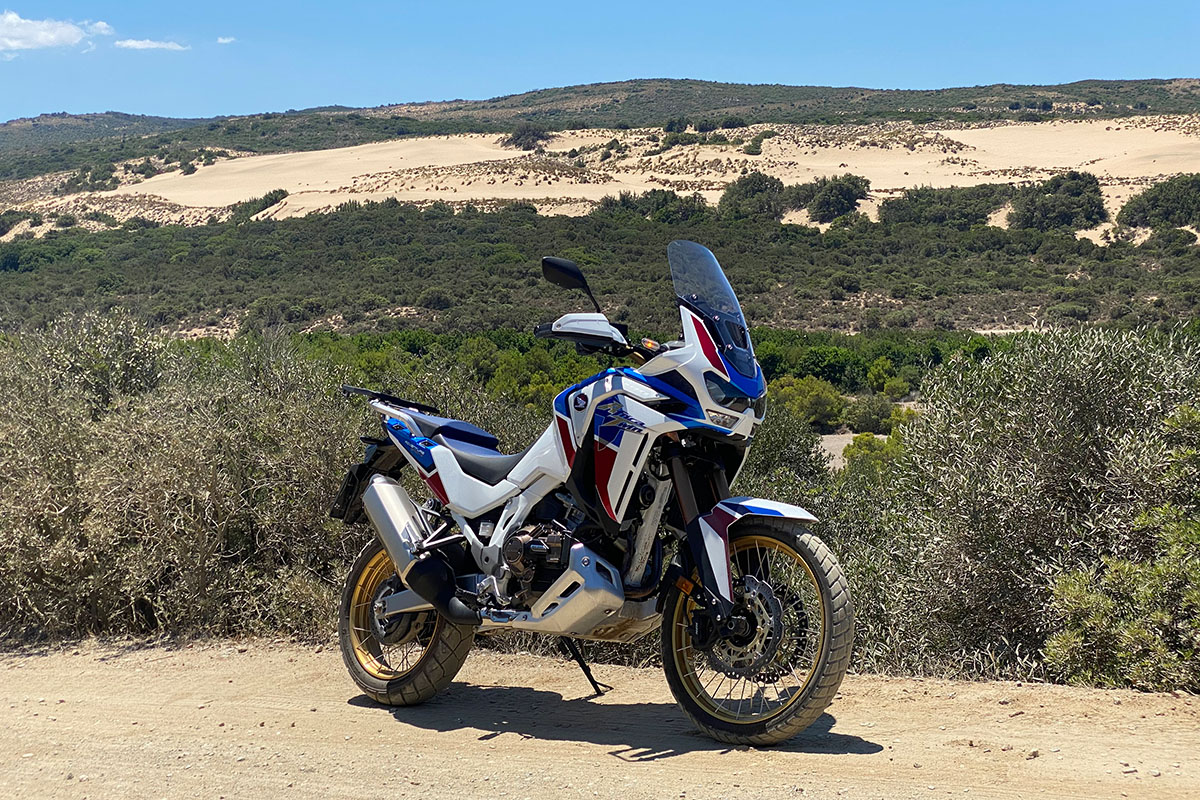 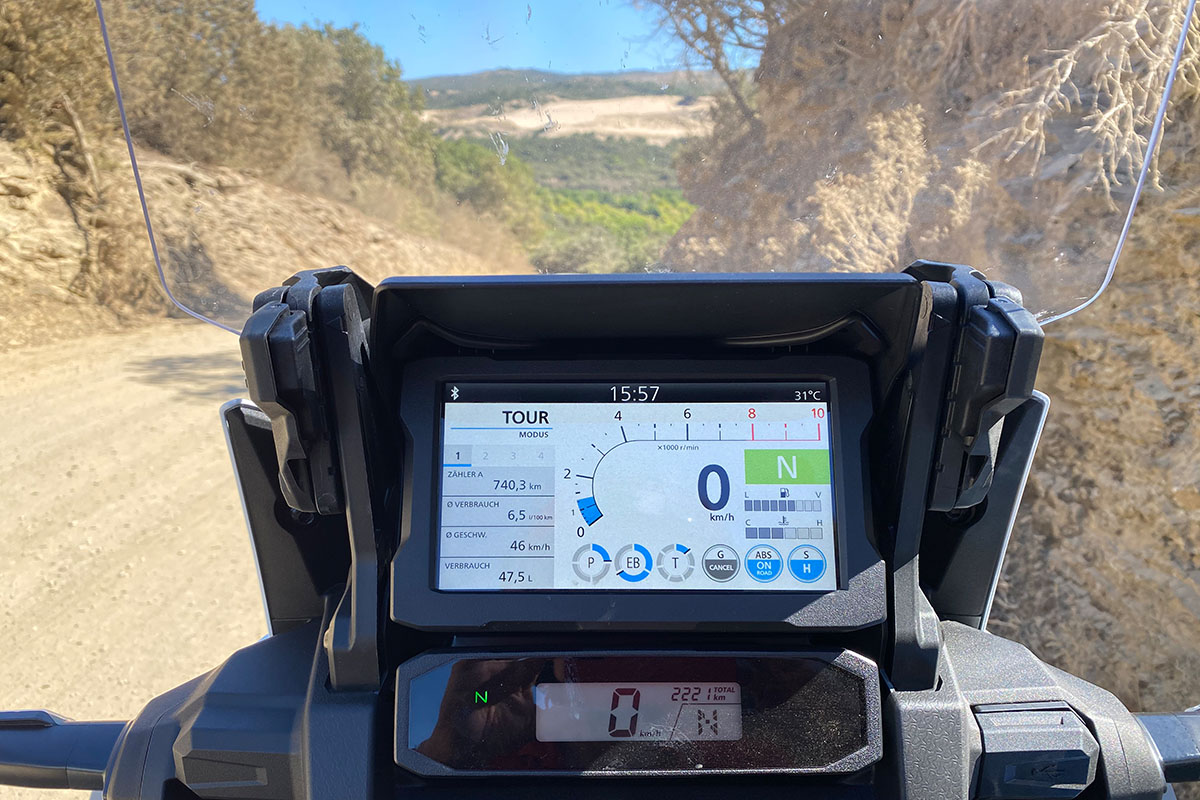 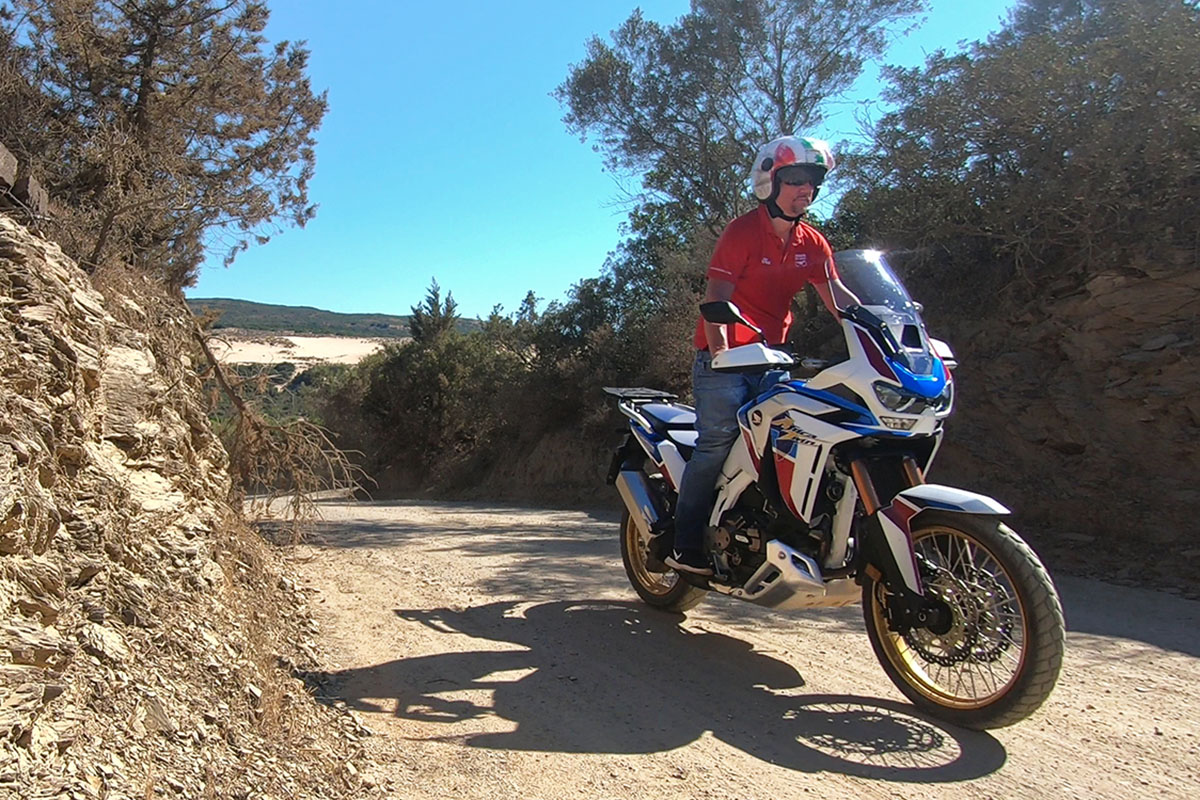 UPGRADES IN MANY AREAS

The liquid-cooled parallel-cylinder-SOHC-4-stroke engine on-board the Honda Africa Twin has been enlarged to 1084 cm³. This was achieved by lengthening the hub from 75.1 mm to 81.5 mm and with that the increased maximum power output to 102 horsepower and torque to 105 Nm. Sufficient power was available at any time, pulling power at low revs was also exceptional. Integrated into the centre of the bike is the Inertial Measurement Unit (IMU) MM7.10 by Bosch. This six-axis measurement system collects information about the bike’s spatial situation in real time and then with it controls the Traction- and Skid Control on the back wheel, Wheelie control, Cornering ABS as well as Cornering Recognition from the Dual Clutch Transmission (DCT).

On my test bike there was also the optional extra, Electronically Equipped Ride Adjustment (SHOWA EERA), installed, with which damping force is adjusted for the respective riding mode, and so insures better ride comfort at lower speeds and more stability for higher intensity riding. There are 4 standard settings for the rear spring preload, “rider”, “rider with luggage”, “rider with pillion” and “rider with pillion and luggage”. Furthermore, the damping and spring preload can be fine-tuned to 24 levels.

THE DUNES OF PISCINAS

The “Dune di Piscinas” is one of the largest sand dune in Europe and was awarded status as a World Heritage Site by UNESCO. The ochre coast stretches over about 2 square kilometres and is regarded, with its idyllic beach, as the jewel of Costa Verde. The dunes, formed by the mistral, get up to 100 metres high and extend as far as two kilometres inland. They’re framed by the green of typical Mediterranean flora. Sea turtles lay their eggs on the shores of this natural paradise.

To get closer to the dunes with the motorbike, I turned right at a fork in the road and so left the most direct way to the Piscinas beach. Thanks to the 250 mm of ground clearance on the Africa Twin Adventure Sports, I could cross the ford on the main road with my shoes almost staying completely dry. Making it easier to touch the ground, the seat height was reduced to 850/870 mm and the width of the seat narrowed by 40 mm.

At the top of Rio Piscinas I left the SP4 in the direction of the beach. A few times I crossed the rusty red river, whose colour is traced back to the iron, until I reached its mouth at the sea. The traction from the Bridgestone Battlax Adventurecross Tourer AX41T standard street tyres met its match when I hit the sand and gravel on the off-road track. I had some front wheel slides, which, however, thanks to my cautious riding didn’t cause me any problems. 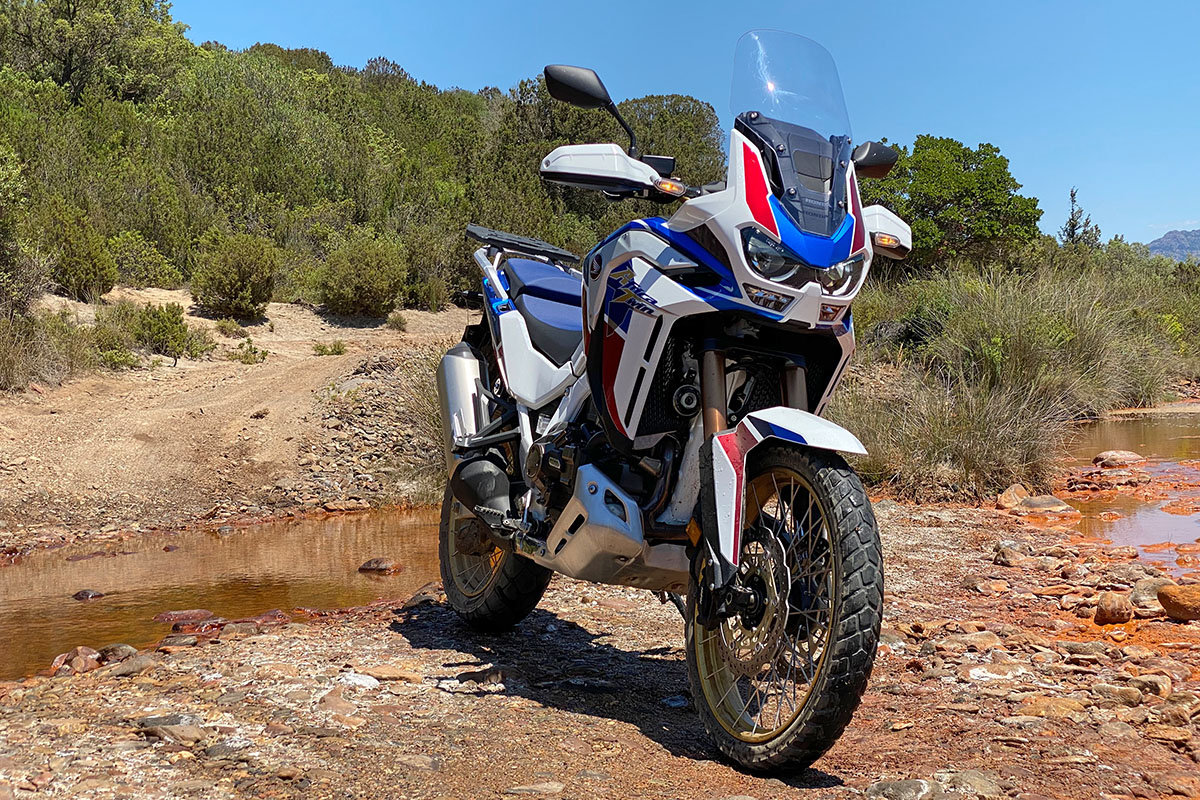 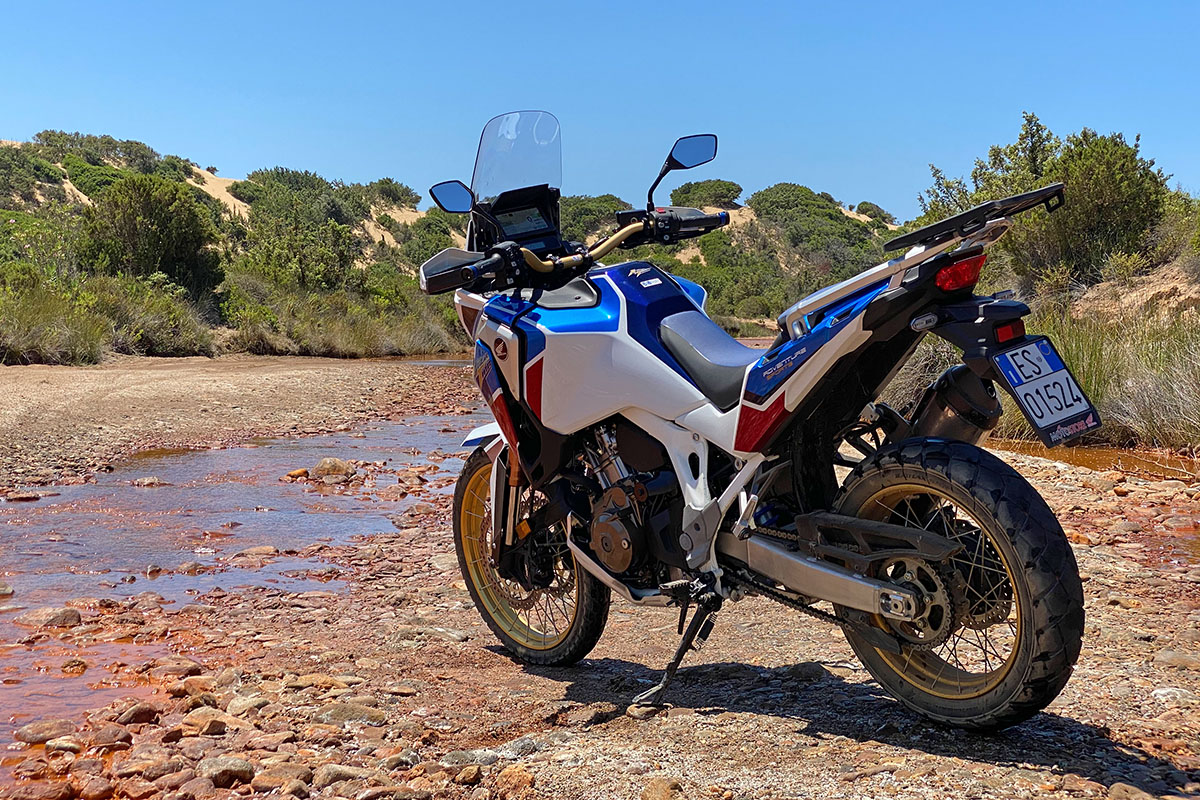 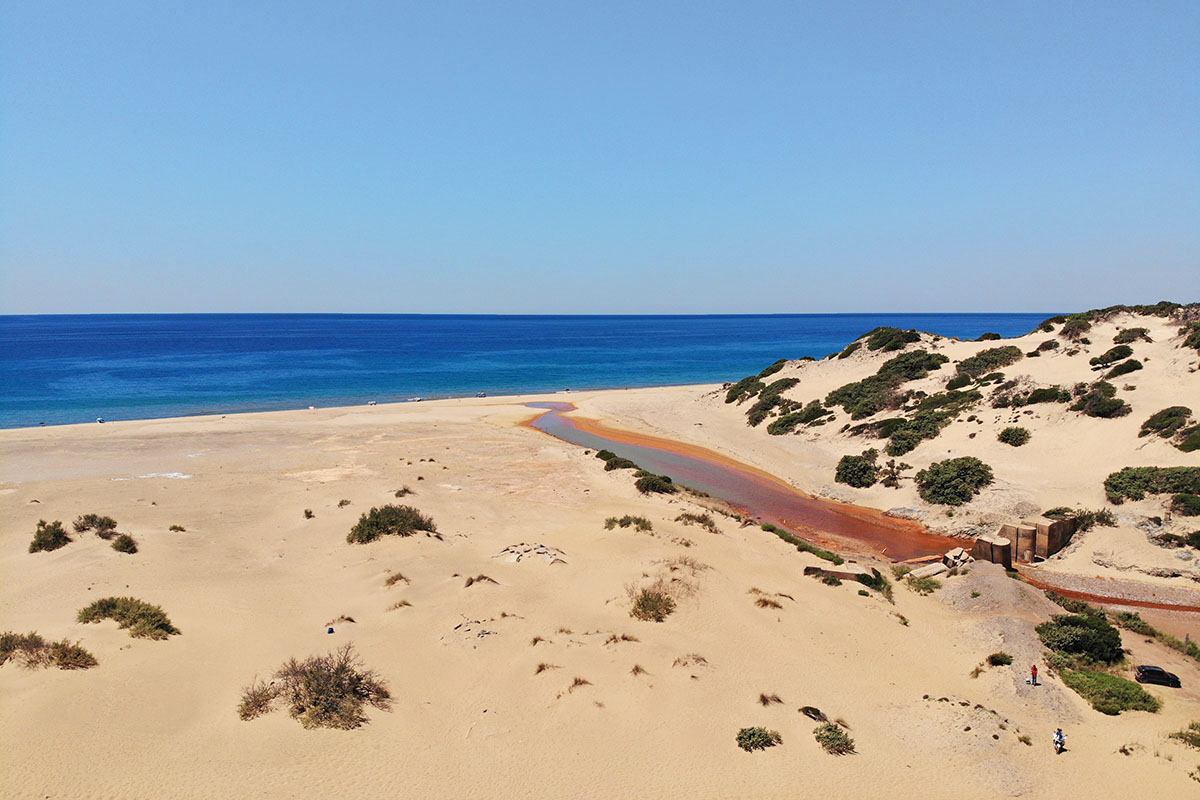 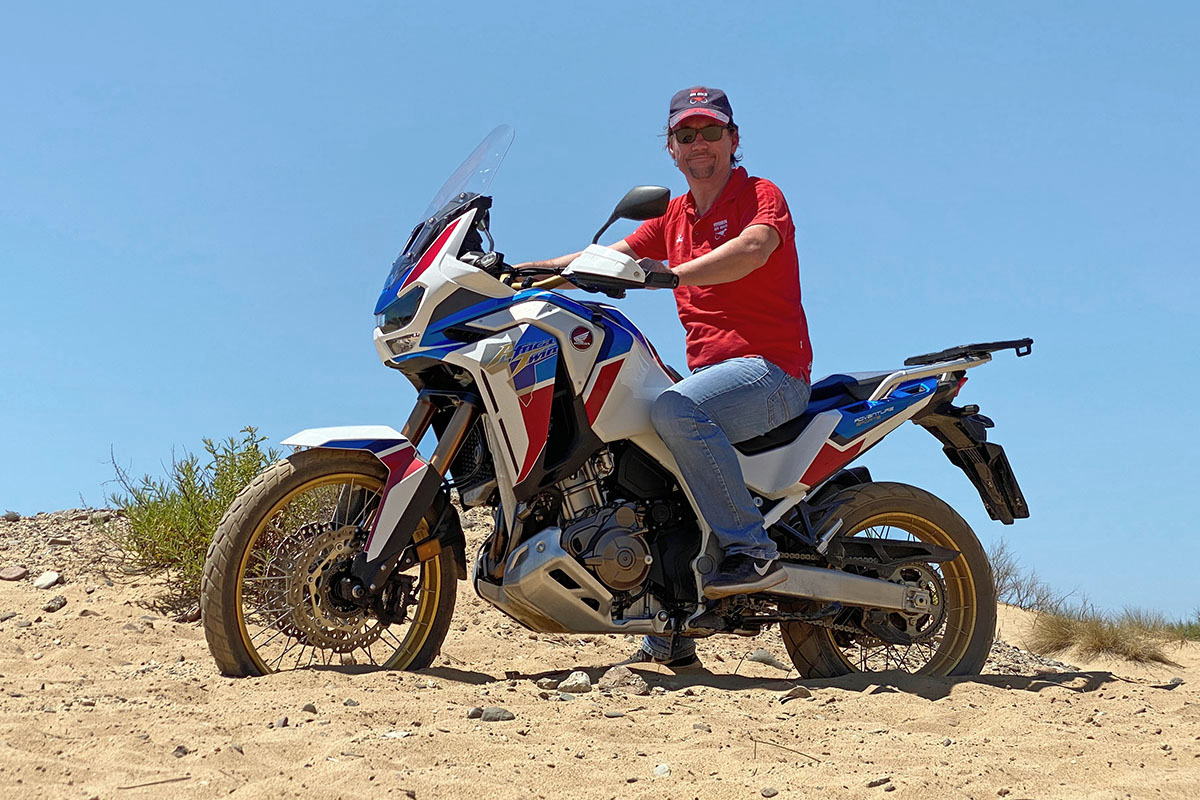 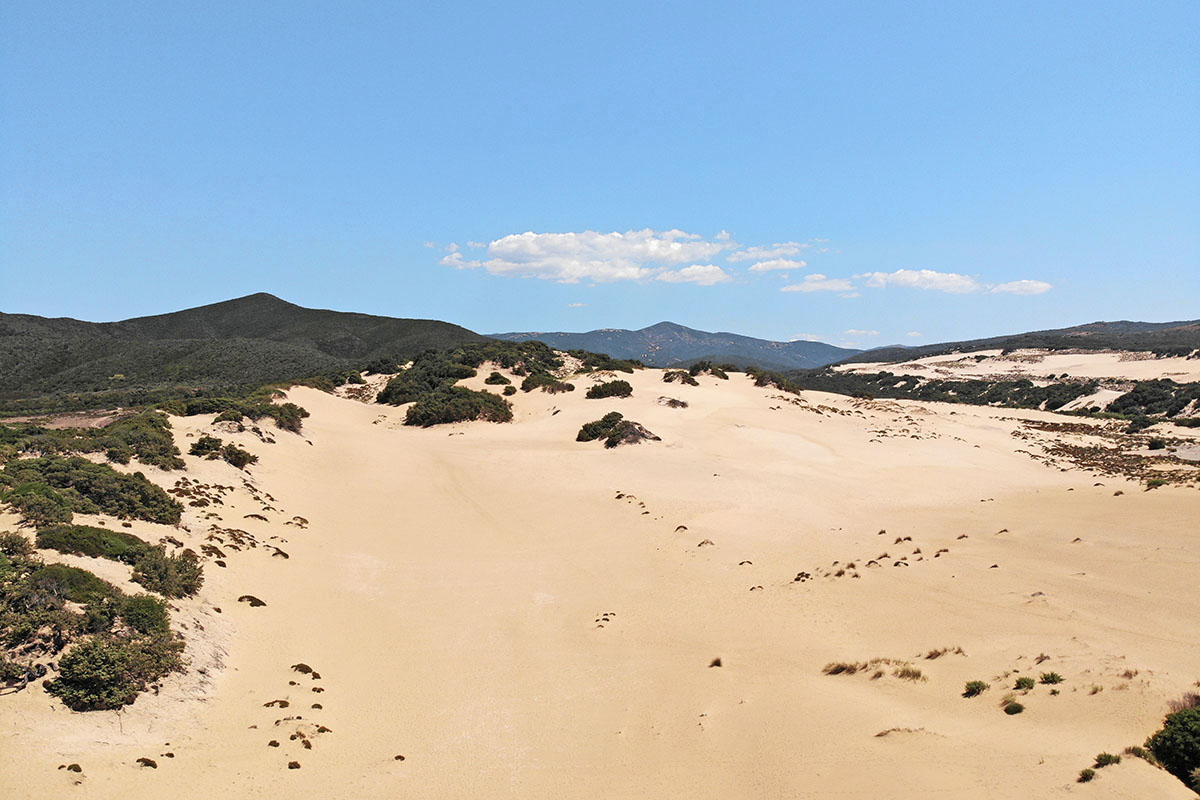 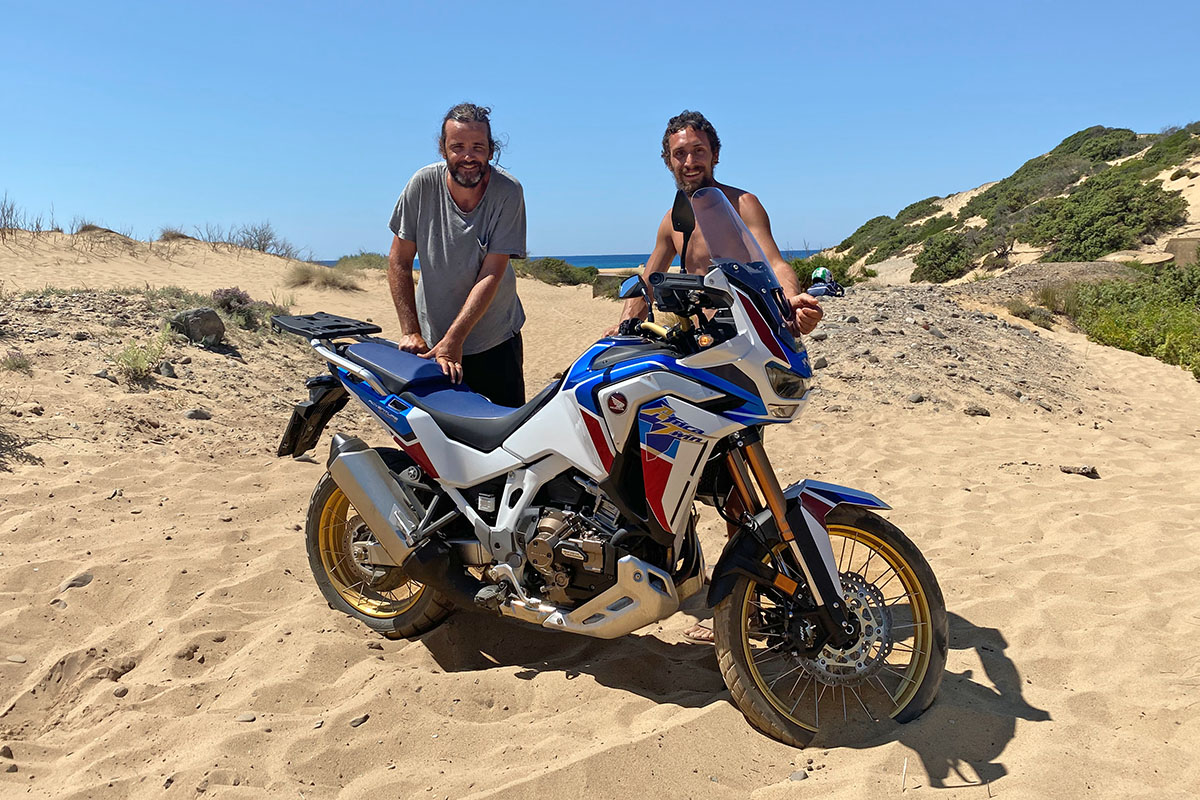 But then a few metres into the dunes I lost all traction. Suddenly there was no more give in the sand. Because there was no breeze it got seriously hot and my water supply was gone in no time. The Africa Twin’s still sufficiently full 24.8 litre petrol tank wouldn’t help me much there. With every attempt to give it some throttle the rear tyre dug itself deeper into the sand, pushing wouldn’t work either. There were no people to be seen in this surreal-looking place, let alone there being no telephone reception.

Luckily, on a beach a little while away at a single parked campervan, I could ask Elia and Massimo for help. Now working together we managed to dig the motorbike out of the dune. Massimo’s wife thankfully had a big bottle of water for me – again many thanks to both of them. After a pleasant chat I got on my way back to Cagliari.

With the newly developed CRF1100L Africa Twin Adventure Sports Honda has succeeded in creating an even more comfortable dual-sport bike. Due to the large fuel tank, which makes a range of up to 500 km (310 miles) possible, and the upright sitting position the bike is best suited to long distances. Cruise control, heated grips, an adjustable windshield and the extended front fairing just heightens the comfort factor. The different riding modes means however the bike fairs way in many different applications. Should it wander off-road once, the series tyres do pose a distinct limitation. In this department though a pair of Metzeler Karoo 3 can easily remedy that, which while being close to the best for off-road performance are very well suited for the road as well. 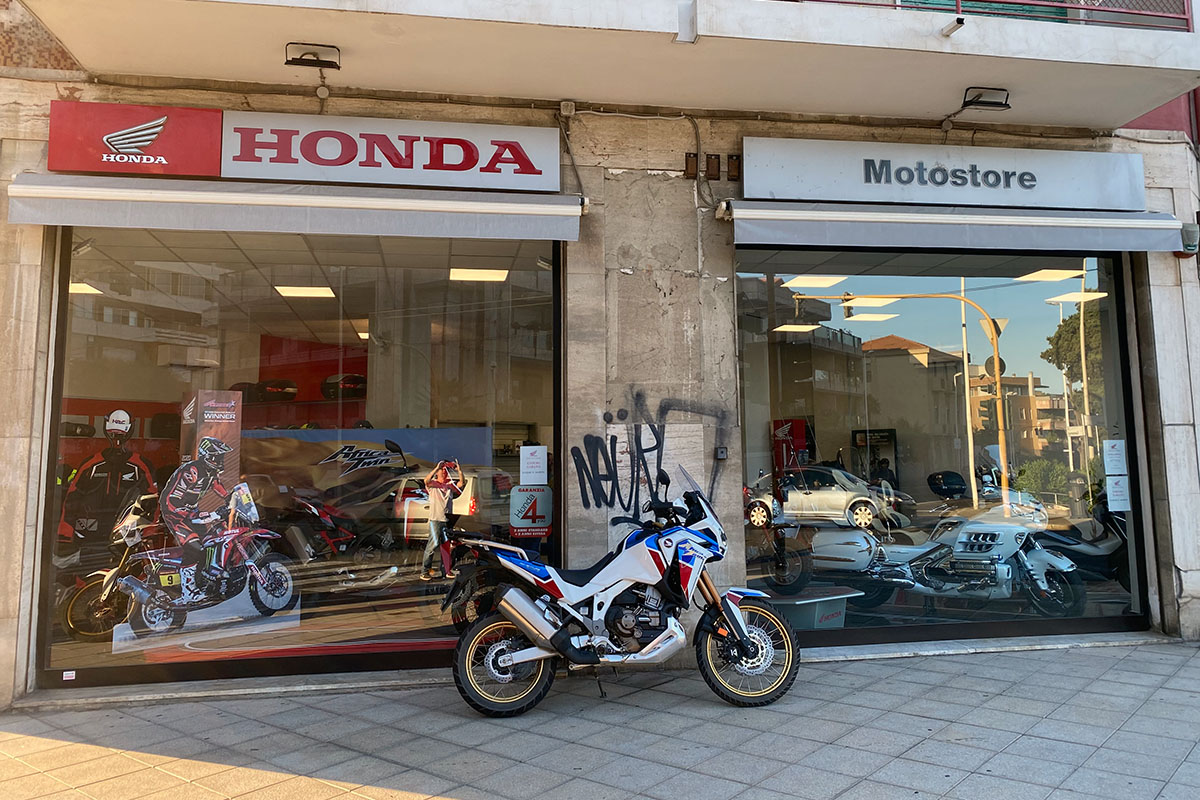 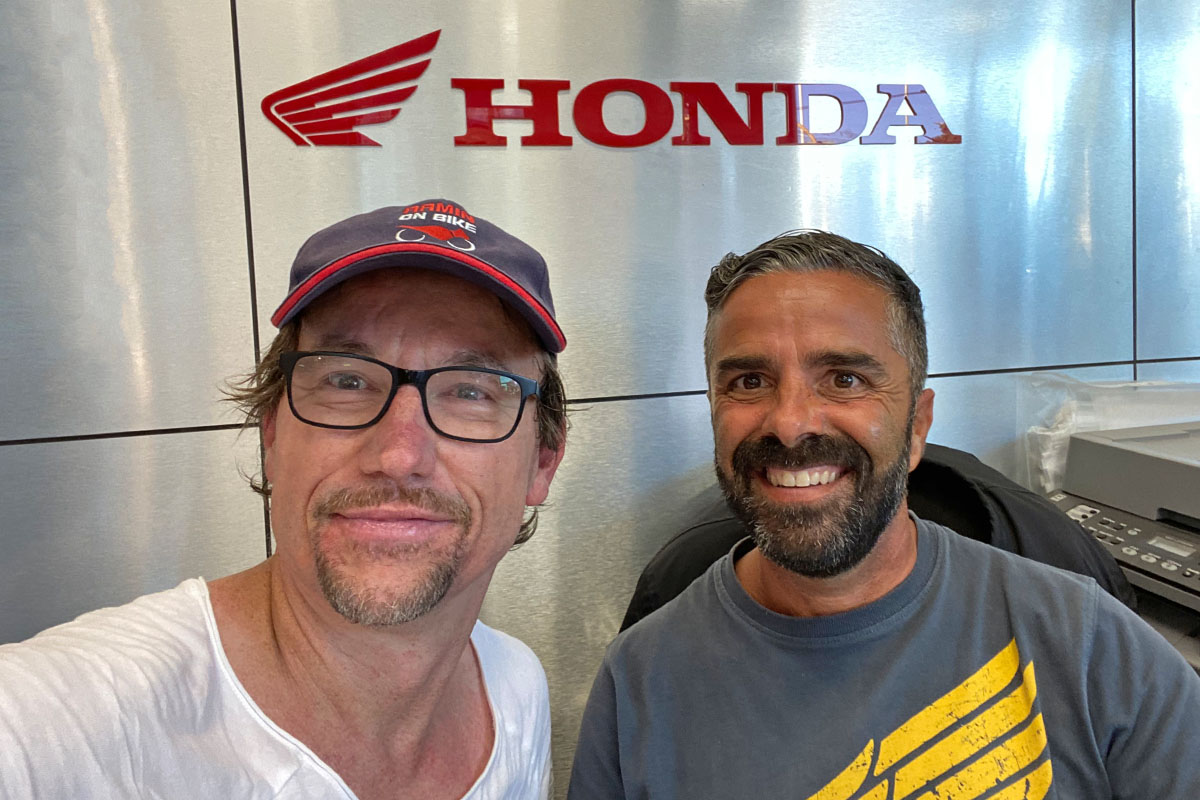 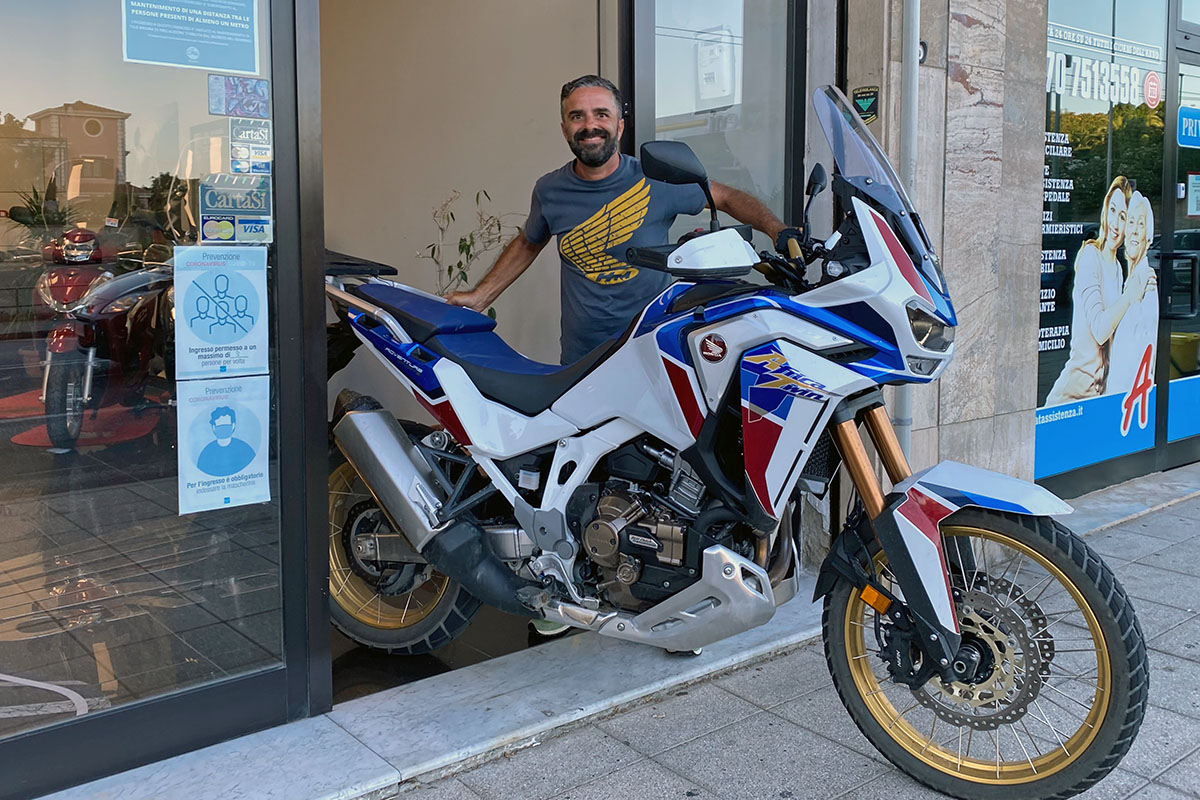