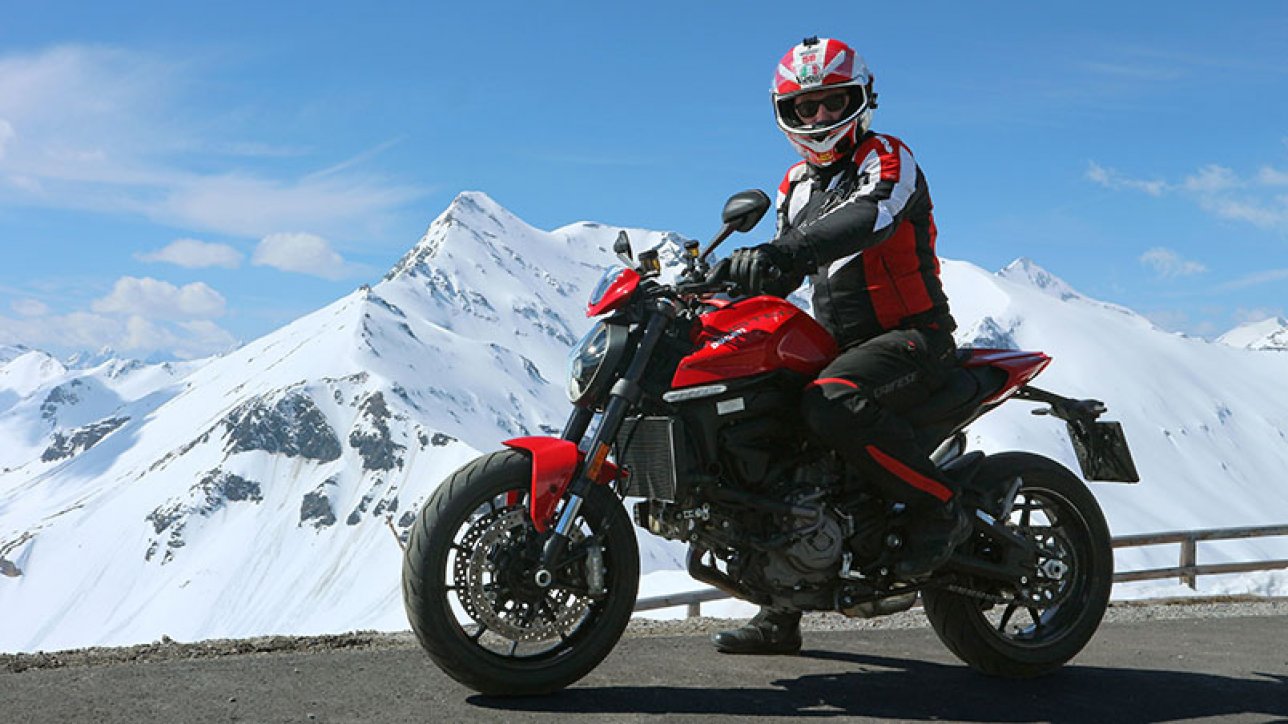 Fusch an der Glocknerstrasse | Salzburg – Since it has become a cherished tradition by now, this year, I once again rode up to the most famous mountain in Austria a few days after the Grossglockner High Alpine Road has been reopened. This time with the new Ducati Monster…

This year, snow clearance on the Grossglockner High Alpine Road began on 19th April, then on 12th May it was opened for traffic. For motorcyclists we got the go-ahead at the beginning of June. The ascent up to Austria’s tallest mountain was the crowning glory of my test with the new Ducati Monster, which was supplied by the Seiwald Car and Motorcycle Centre in St. Johann in Tirol (see my review here…). Due to the very unsafe weather conditions this year, I had already been keeping my eye on the weather forecast a few days before and then I managed to catch a great day. 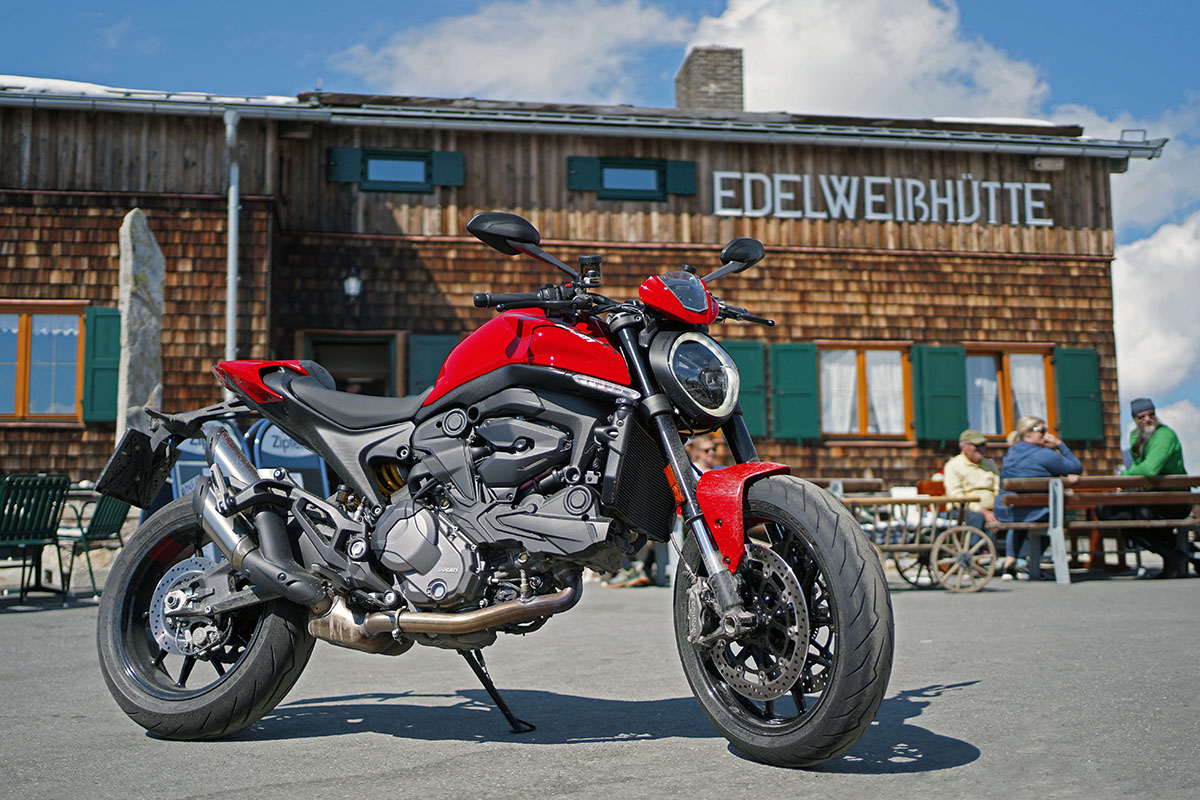 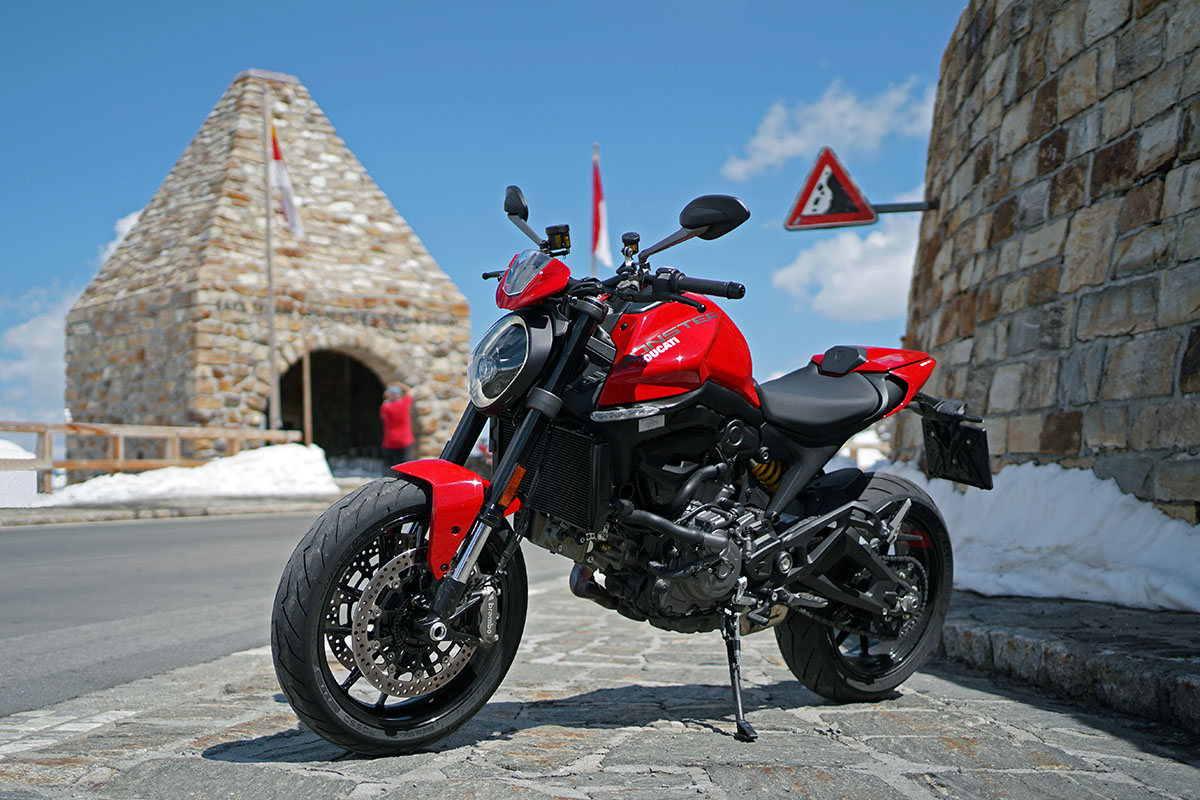 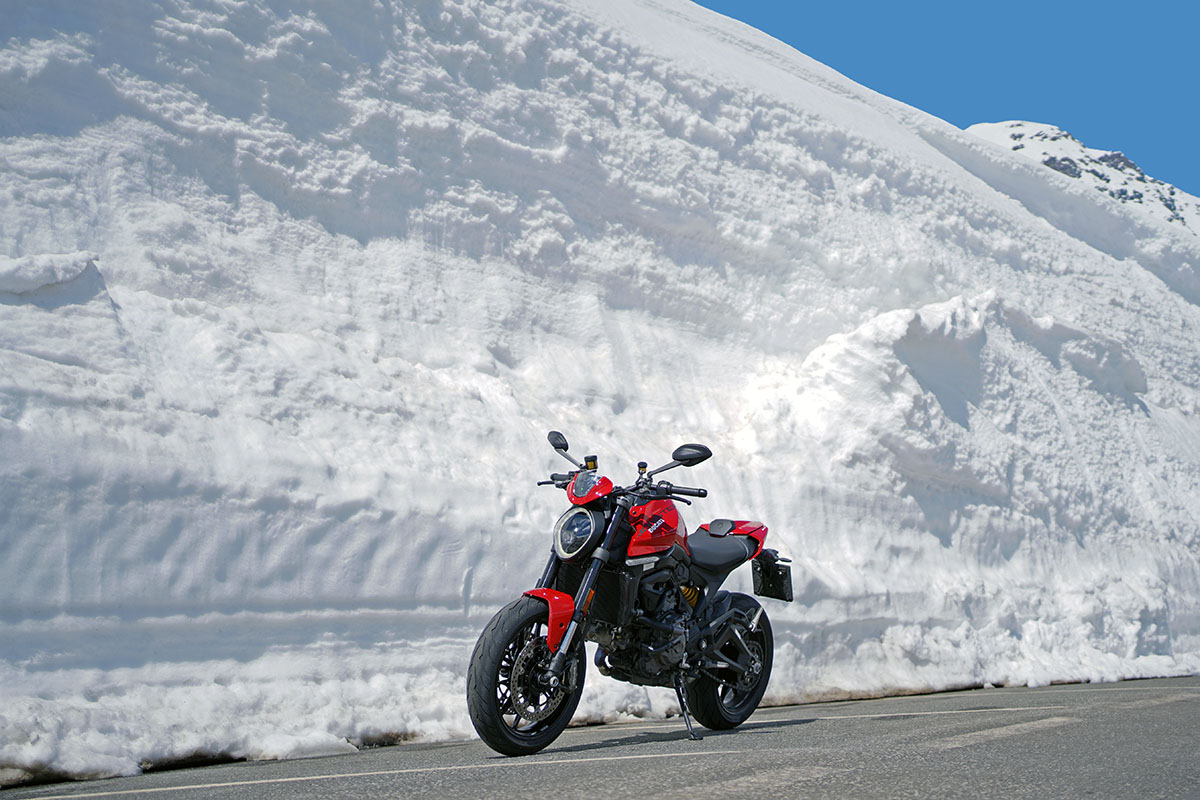 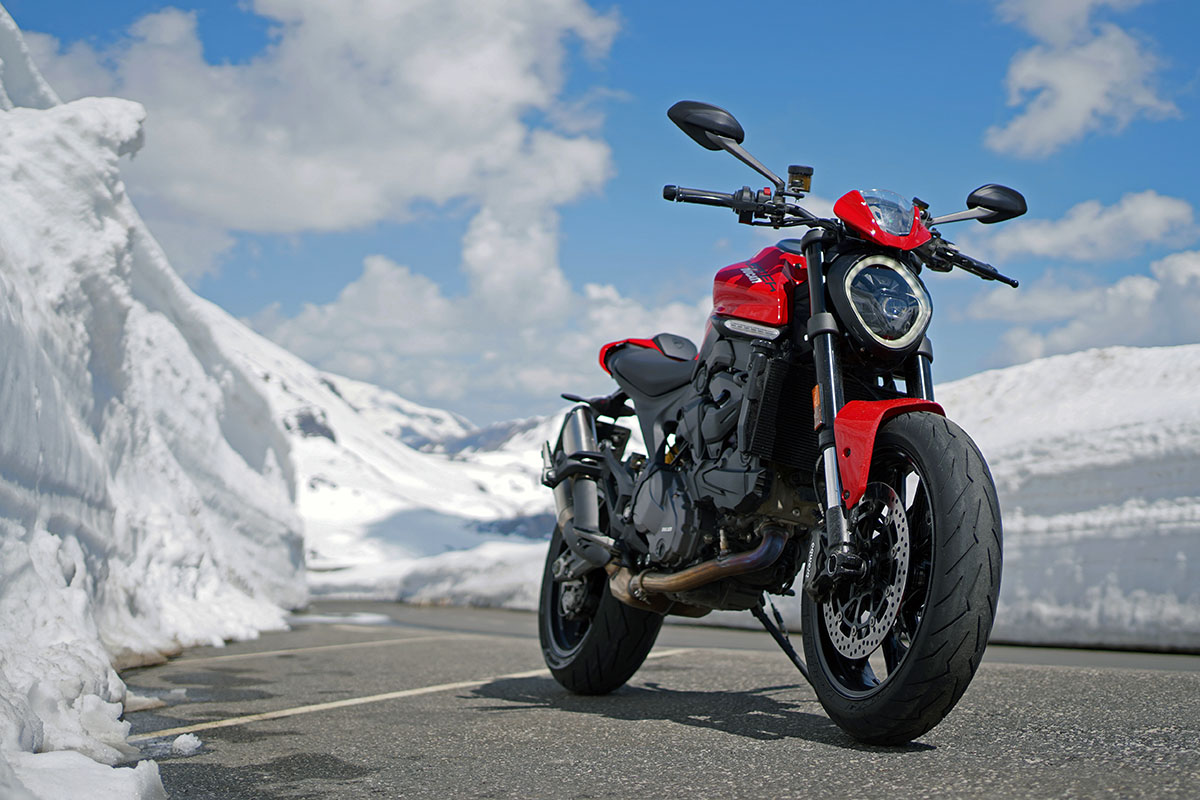 FROM THE TOLL BOOTH IN FERLEITEN UP TO THE EDELWEISSSPITZE

The Grossglockner High Alpine Road winds through the Austrian states of Salzburg and Carinthia for 48 kilometres (30 miles) with 36 turns. I started at my home in the Pillersee valley and rode via Saalfelden and Zell am See to the beginning of the panoramic road shortly after Fusch an der Glocknerstrasse. The road, opened in 1935, runs deep into the centre of the Hohe Tauern National Park. After the Ferleiten tollbooth, the road twists and turns steeply southwards along the mountainside. After the first turns I soon rode past the Hochmais at 1,850 metres (6,070 ft). After rounding turn 14 you have reached the Fuscher Törl. Just before reaching that I turned left and headed up the tarmacked side road towards the Edelweissspitze. From the Alpine Road’s highest point at 2,571 metres (8,435 ft) it offers an outstanding view of the 35 three-thousand-metre-high mountains.

Arriving back at the bottom I passed the Fuscher Törl, a memorial dedicated to those who lost their lives during the building of the high mountain road. After a short descent leading down to the Fuscher Lacke at 2,265 metres (7,421 ft), the road gained altitude again in the direction of Hochtor. Left and right, taller and taller snow walls loomed over the roadside, sometimes reaching a height of up to 12 metres. Clearing the road in the springtime every year lasts around 25 days. Since 1953, rotary ploughs are employed in clearing the snow. The ploughs were developed by Franz Wallack, designer and engineer of the Grossglockner High Alpine Road. After turn 17 I had reached the Hochtor Pass at 2,504 metres (8,215 ft). The tunnel here marks the boundary between the states of Salzburg and Carinthia. The following section until the roundabout is my favourite part on account of the winding route it takes. The combination of curves, turns and straights in dry conditions makes it perfect for motorcycle testing. 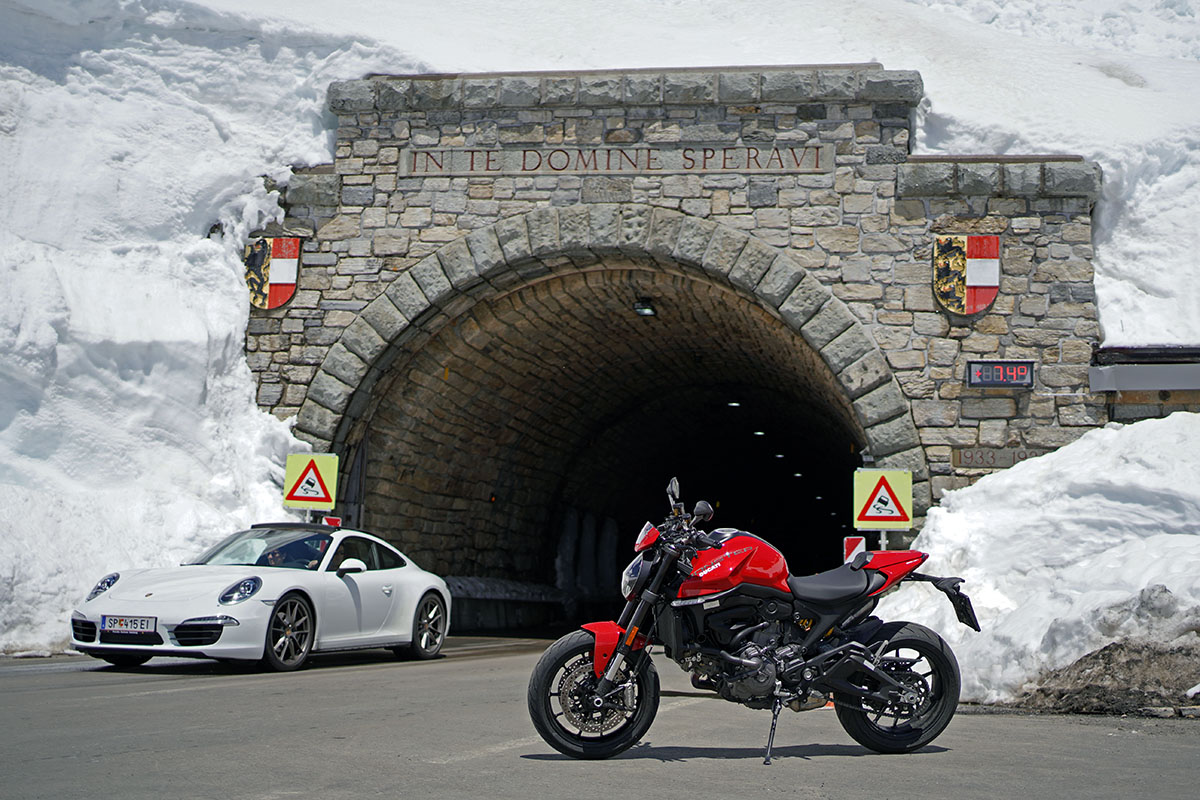 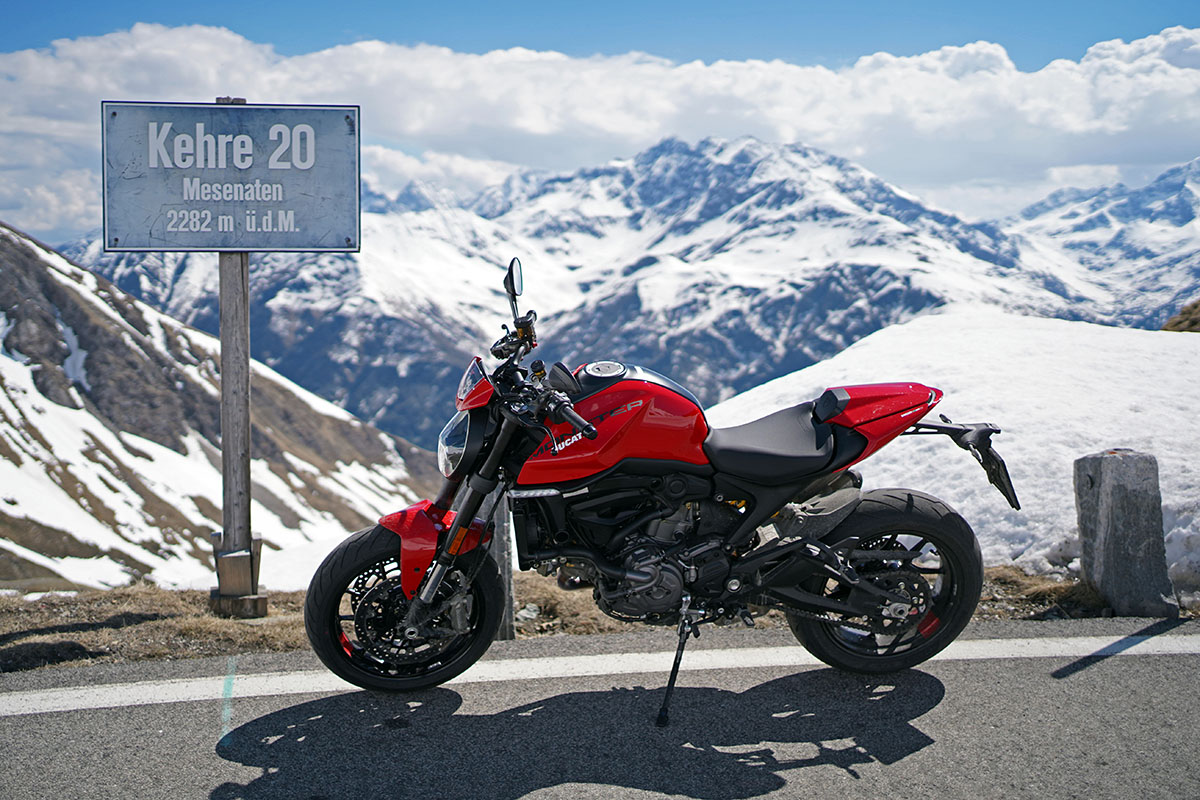 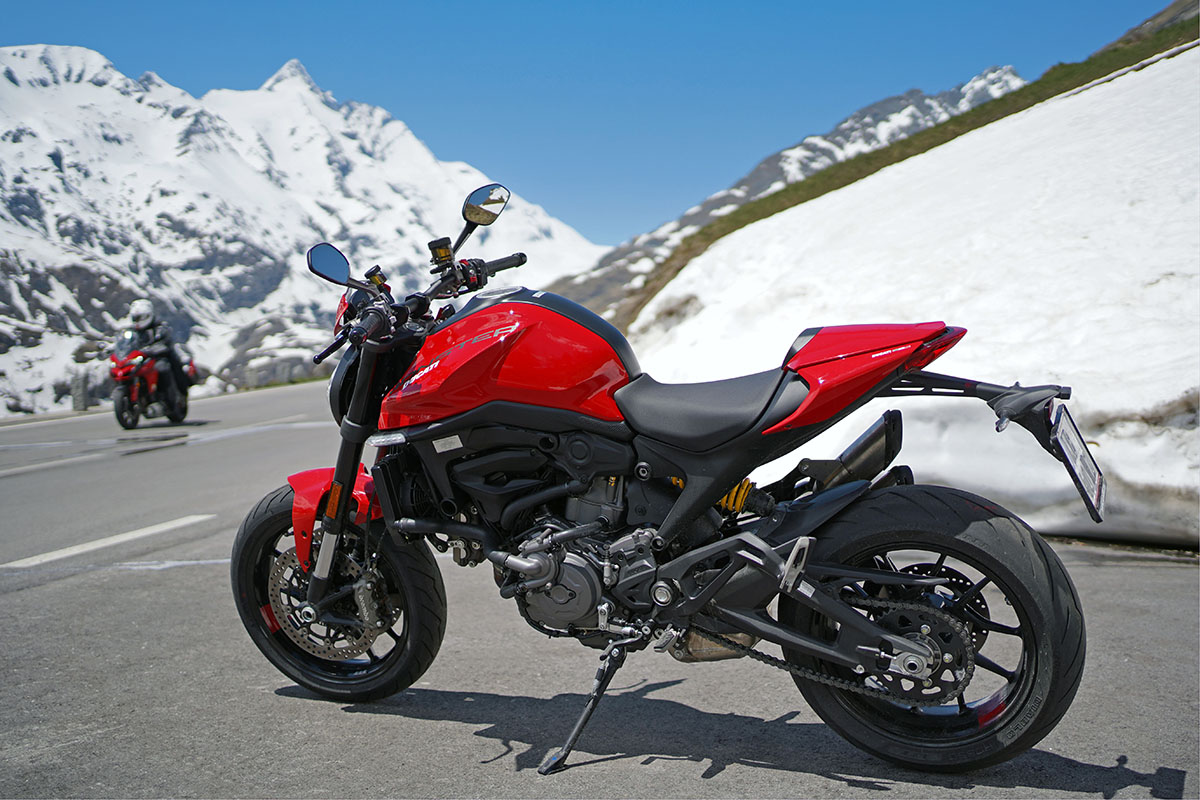 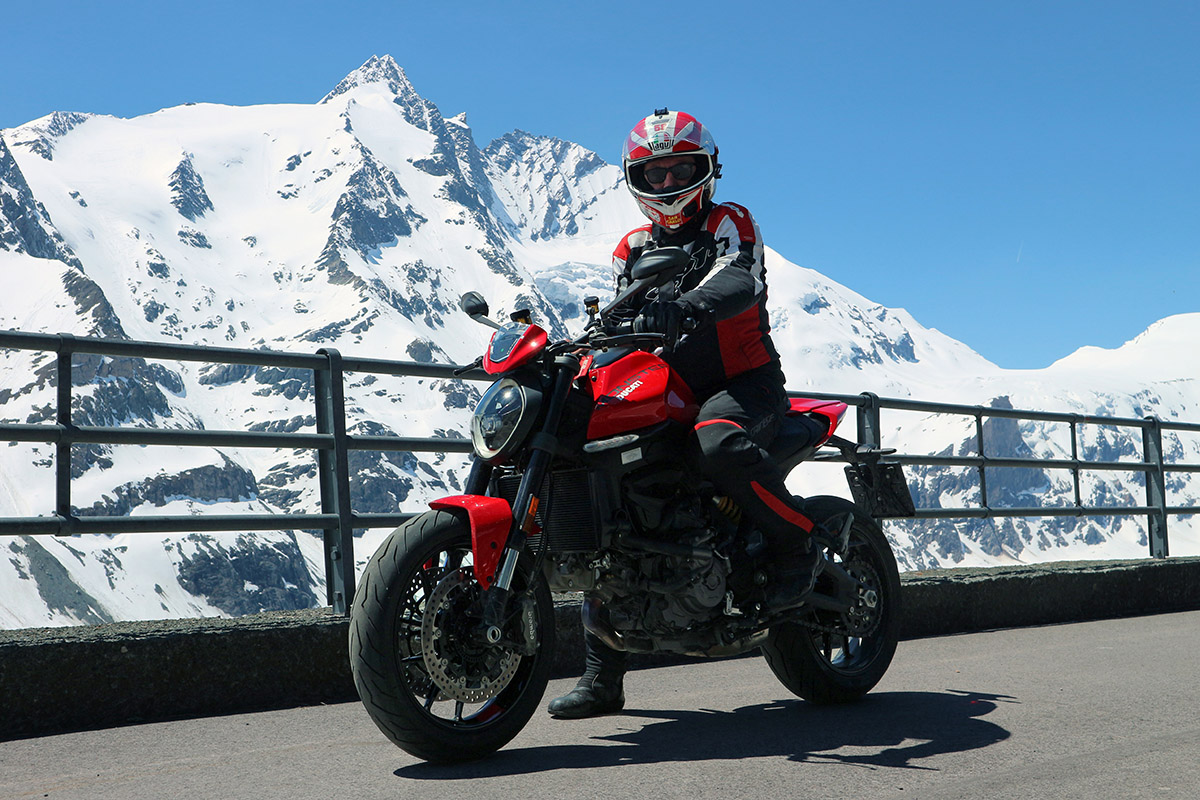 VIEW OF THE GROSSGLOCKNER

I turned right at the roundabout, and then after 8 kilometres the road ended at my destination. All along the road I had an excellent view of the Grossglockner. After a break at the Glocknerhaus mountain cabin, I rode the turns passing the Nassfeld-Speicher reservoir, up to Kaiser-Franz-Josefs-Höhe, a viewpoint on the Grossglockner High Alpine Road. The lookout point offered an impressive view of the Pasterze Glacier and Grossglockner (3,798 metres, 12,461 ft).

The Grossglockner High Alpine Road is always worth a visit. Even after numerous visits there are always more new things to discover. The meandering road with countless curves and magnificent views is not just a paradise for motorcyclists. Depending on snow conditions, there is only snow melt that can dampen riding pleasure shortly after the winter closure. Ideally you would use the mountains roads on weekdays since light traffic makes for more enjoyable riding. A day ticket for motorcyclists costs €27.50 and can also be purchased online. The ticket is by no means cheap. Just consider however the expense for clearing the snow annually and maintaining the panoramic road; then it’s definitely worth the money.