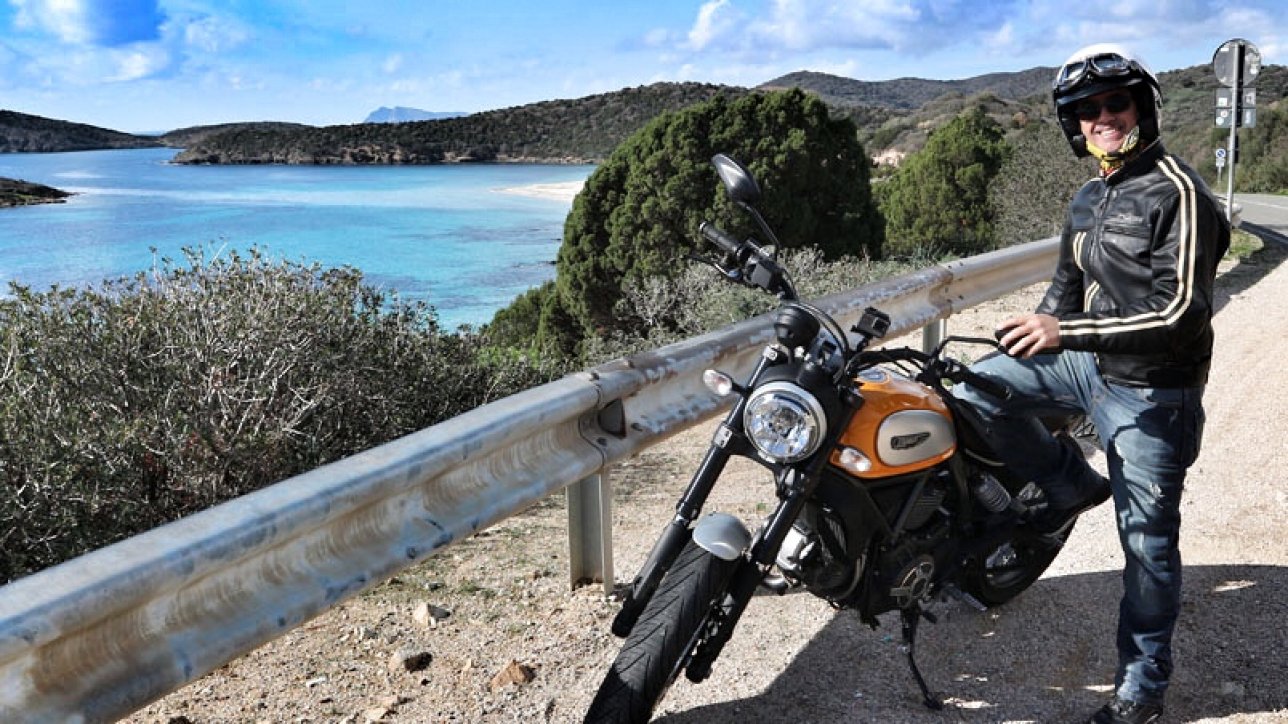 Domus de Maria | Province of Cagliari | Sardinia – The ‘Strada Panoramica Costa del Sud’ along the southern coast of Sardinia from Chia to Teulada and then on to Calasetta in the north of the island of Sant’Antioco I was led by the native Sardinian and owner of ON AN ICELAND Doriano Mucelli on his scrambler Ducati. It was a lovely and unexpected day in January…

We started off near my guesthouse ‘Rezidenza Kastrum‘ in the Castello of Cagliari (in Sardinian ‘Casteduu’) at the square in front of the castle gate ‘Porta Cristina‘. From the rooftop terrace of my accommodation, once again, an unique view over Cagliari, the capital of Sardinia, was offered on this January morning. Today we were going to drive on the bike along the coast to the west. The starting point of this delightful ride was the Bar Mongittu in Chia, a district of the municipality of Domus de Maria. There we received a very friendly welcome from Federico, a friend of Doriano. After having an interesting conversation about the motorcycle scene in Sardinia and a lot of fun as well, we drank a strong espresso and set off. For an Austrian like me, this January day was incredibly warm. Almost 20 degrees with a slightly cloudy sky, these were the optimal conditions for a motorcycle adventure. Sitting very comfortably on the back seat of Doriano´s Scrambler Ducati, I enjoyed the ride and was able to take pictures and film. With ON AN ISLAND Doriano offers extraordinarily lovely motorcycle trips in the south of Sardinia. I was lucky enough to be able to test one of his tours with him that day. 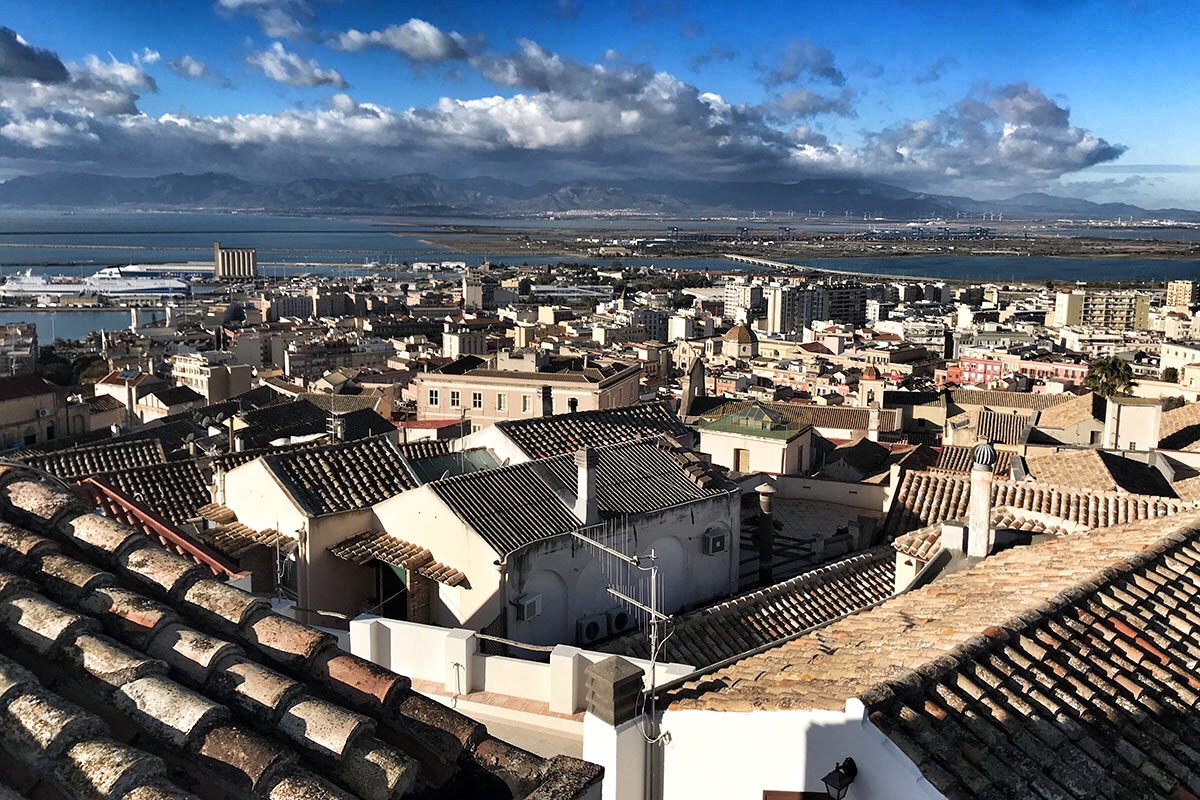 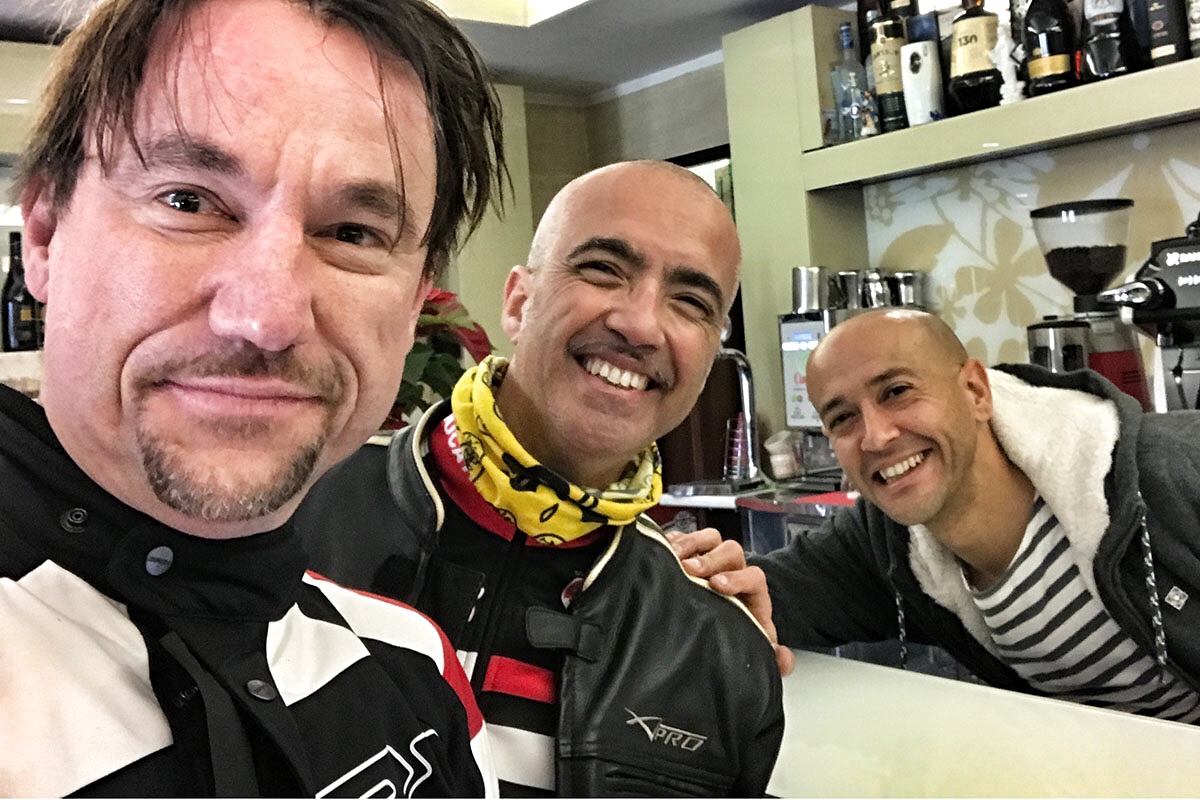 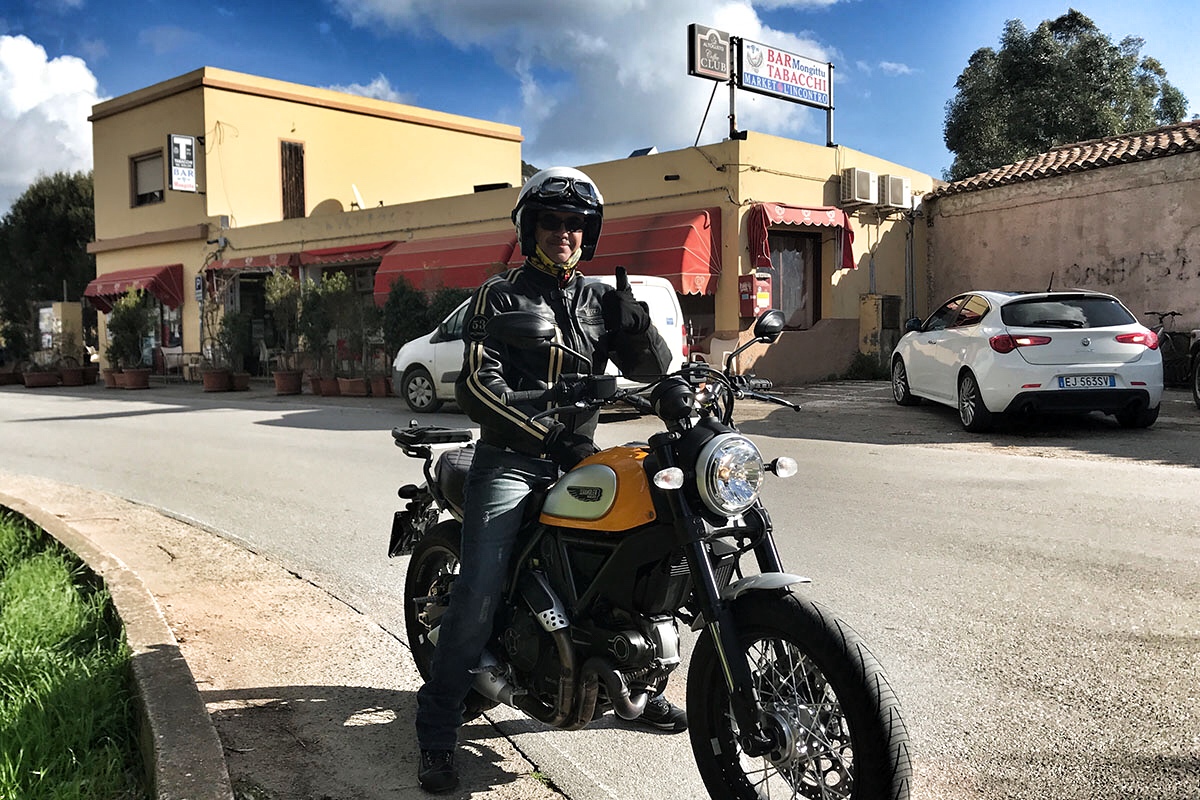 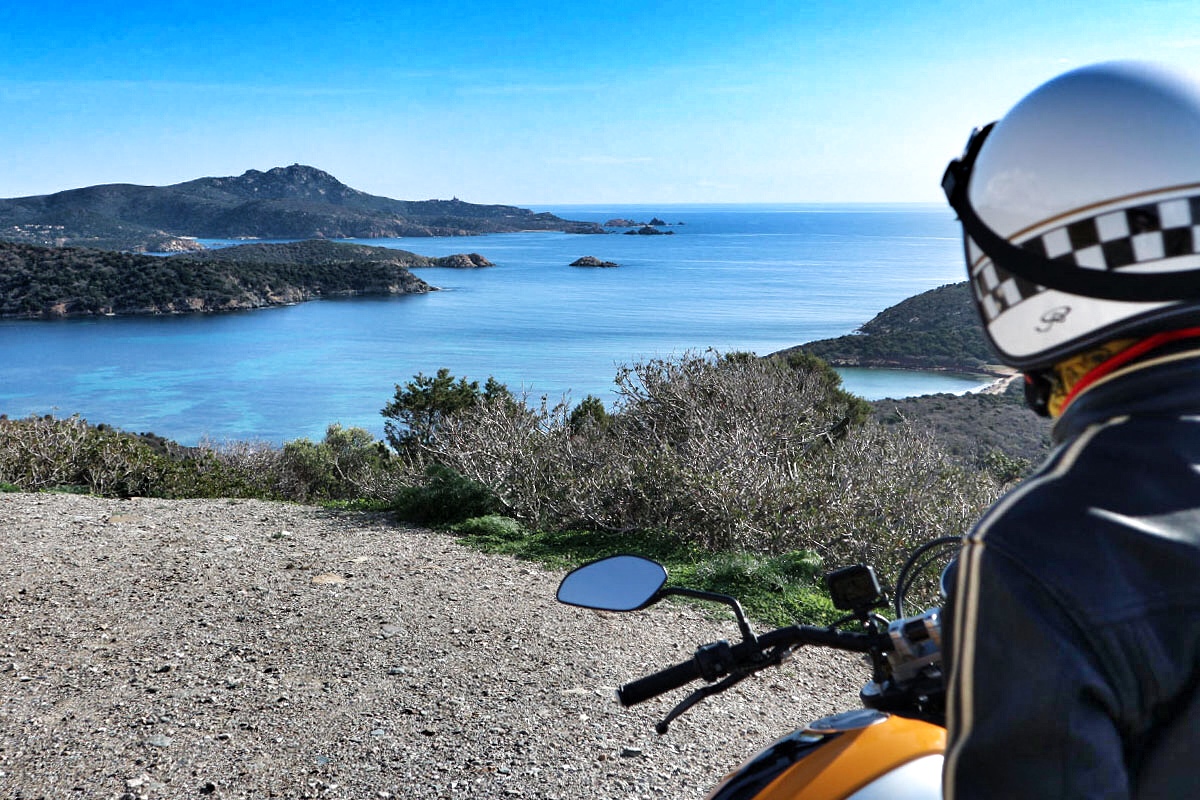 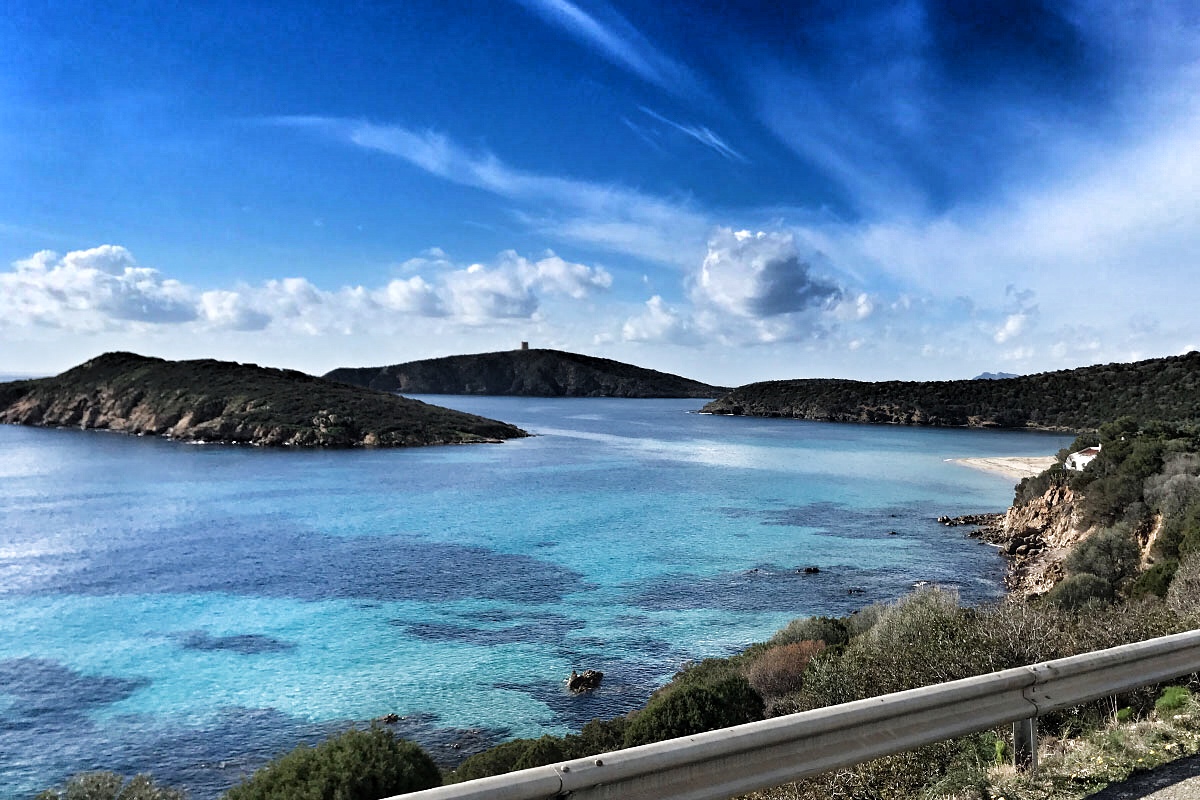 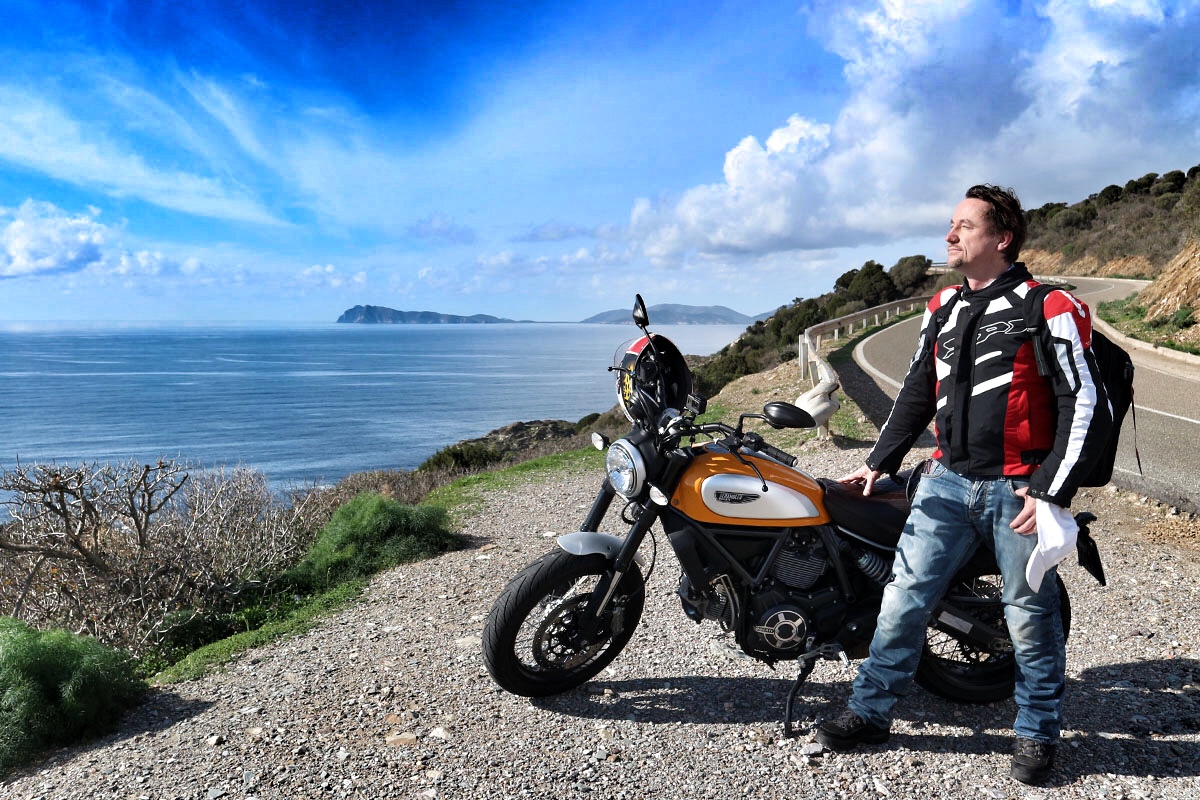 The Strada Provinciale (SP) 71, known as the scenic road ‘Strada Panoramica Costa del Sud‘, leads from Chia to Teulada. After only a few minutes of driving we caught sight of the turquoise-gleaming seawater, glistening in the sun. Here at the southernmost point of Sardinia where the Tyrrhenian and the Mediterranean Sea meet. Nearly every time we approached a bend, Doriano ‘warned’ me about the following staggering impressions I was going to encounter. And as a matter of fact each time I couldn´t believe how beautiful it was here. The view over the sandy beach ‘Spiaggia di Tuerredda‘ is succeeded by the view over the tower ‘Torre di Capo Malfatano‘ at Capo Malfatano. 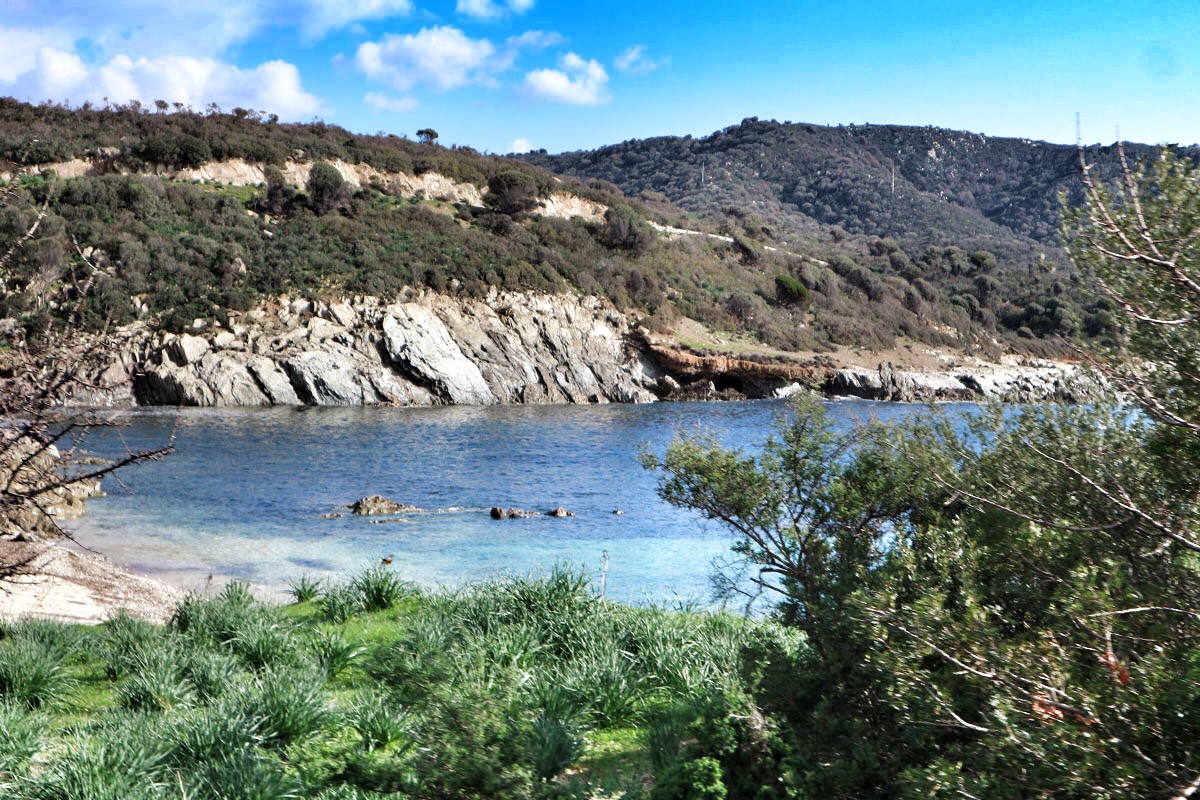 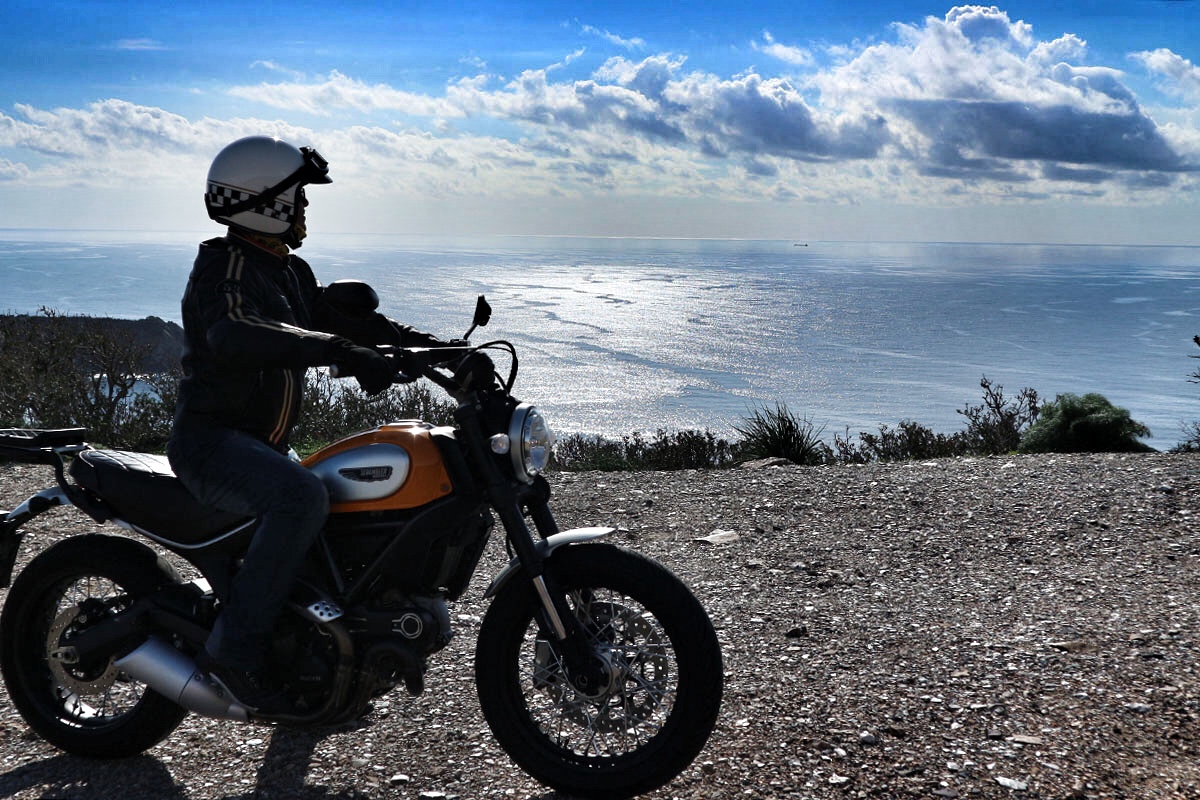 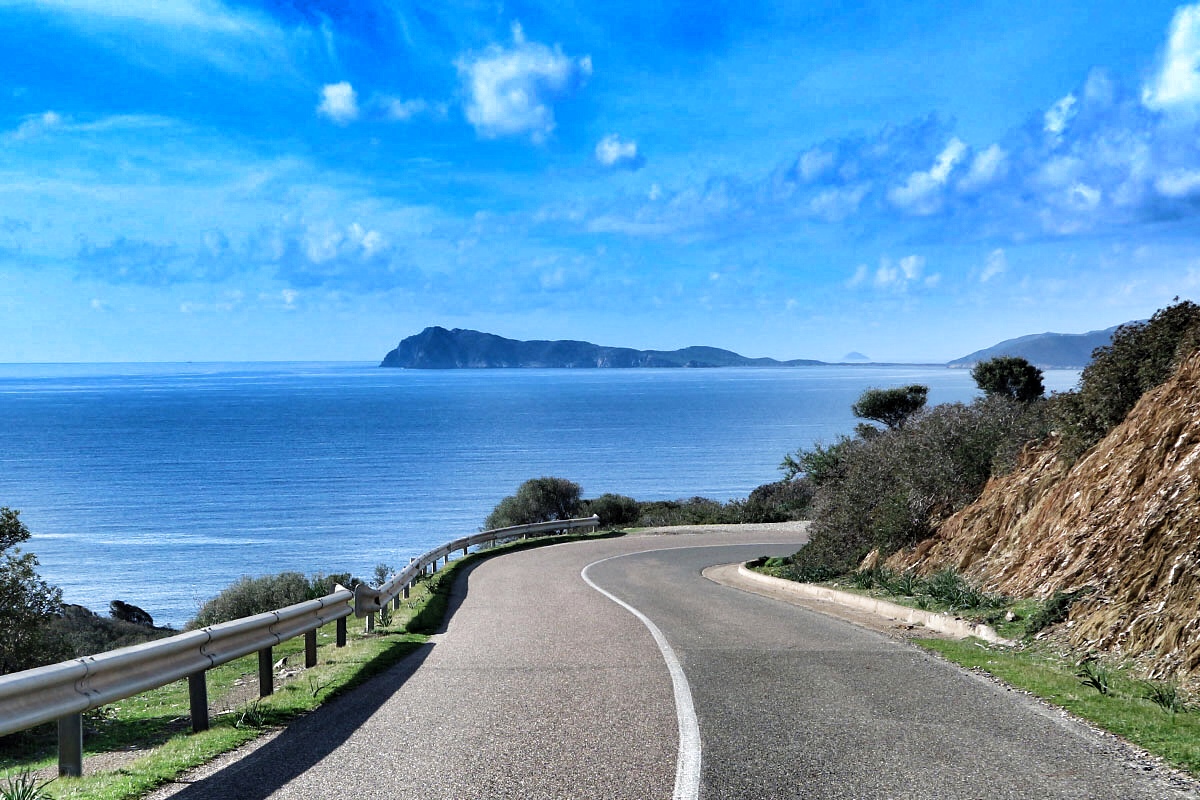 In addition to that, the streets were nearly unfrequented at this time of the year so that we could cruise along the southern coast of Sardinia undisturbed. We drove in curves, slightly up and down along the SP 71, then we stopped at a spot in order to glance at the little island ‘Isola Rossa‘ (you can enjoy the ride as far as there by watching the video which you find at the end of this article). En route to our next destination, the island Sant’Antioco, we came by the ancient Sant’Anna Arresi with its famous Nuraghe. Nuraghes are prehistoric tower-like edifices from the Bronze Age, built around 2000 BC and they served as places of ritual worship. There were around 7000 of those in Sardinia. 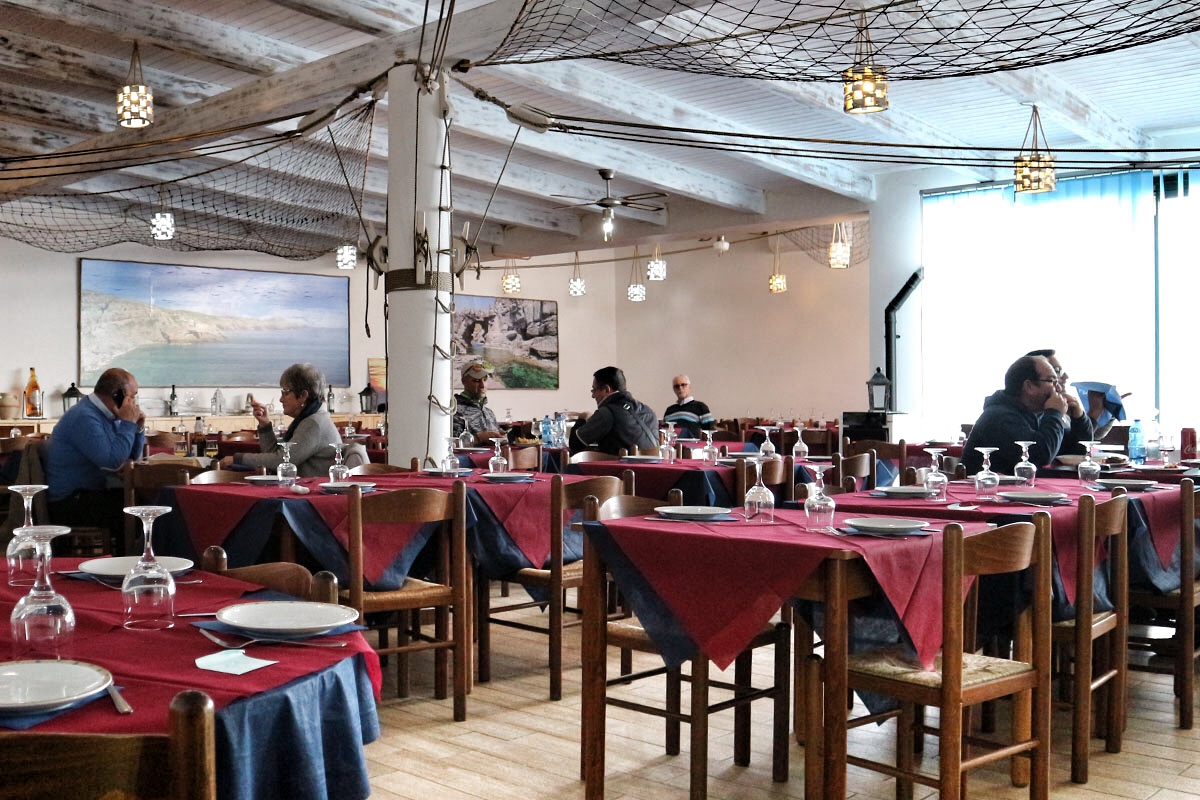 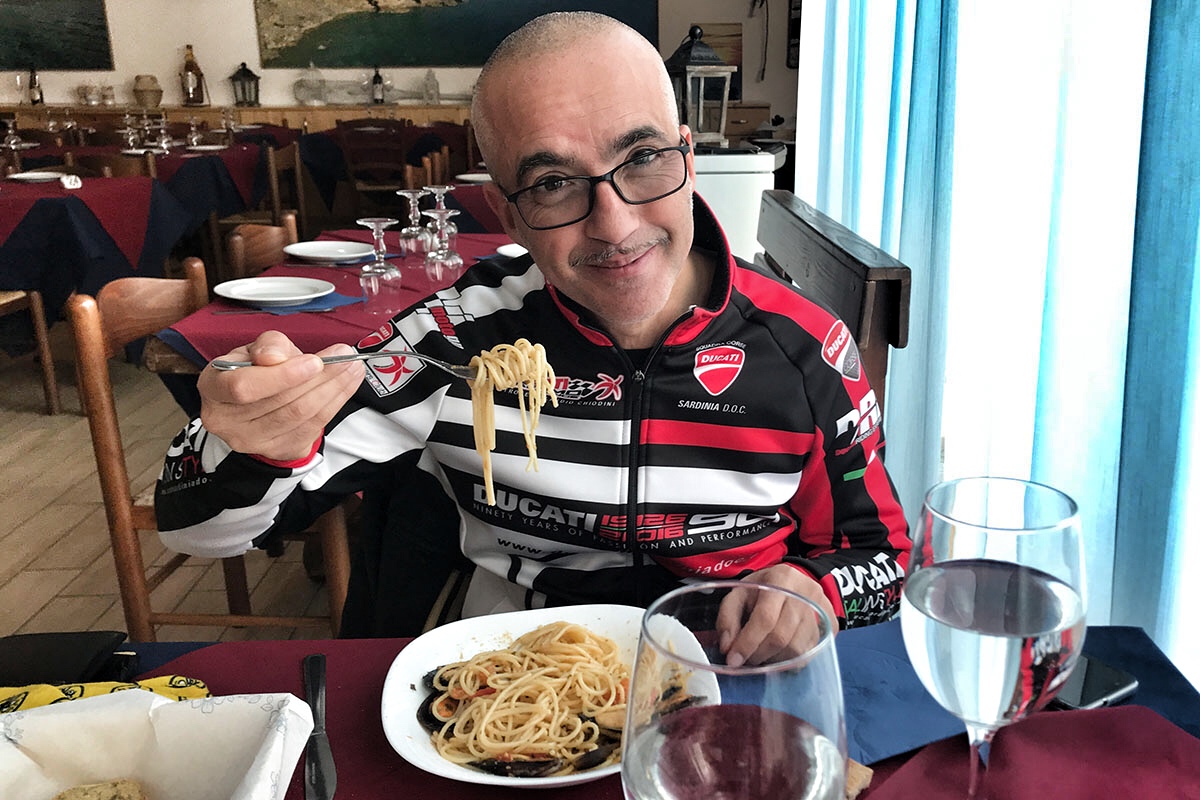 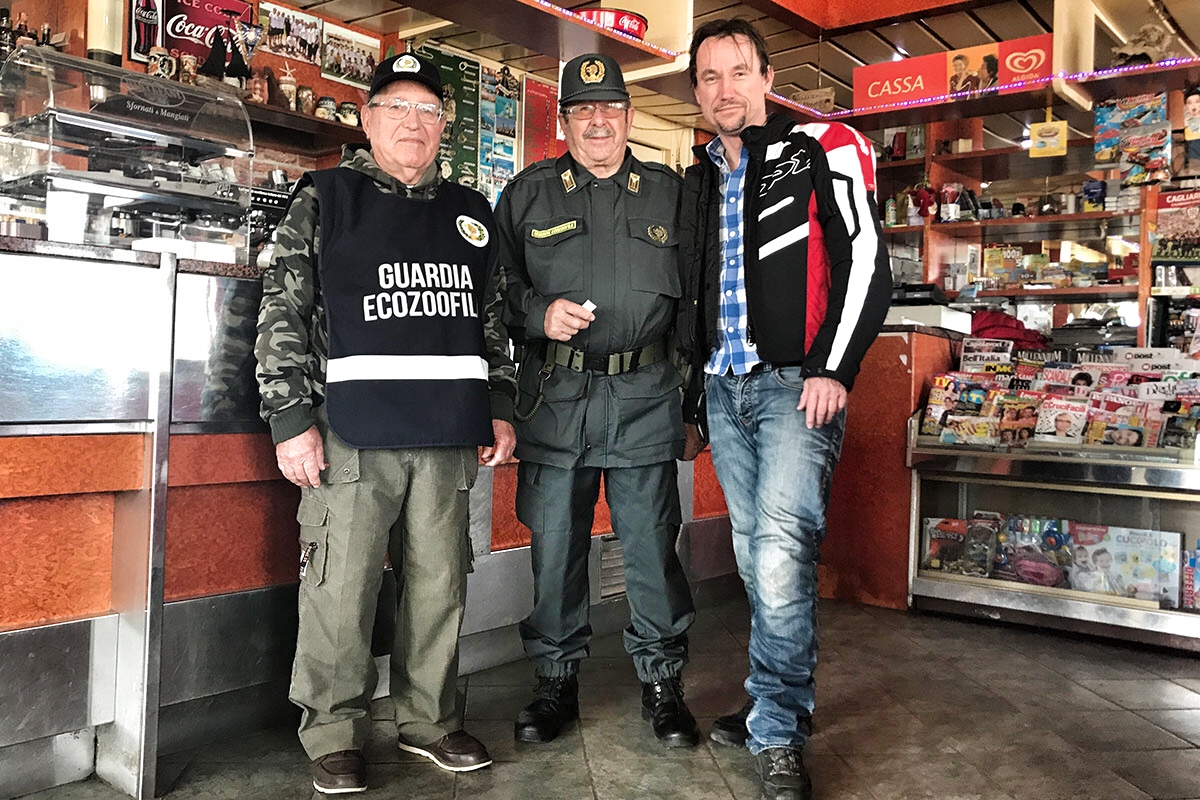 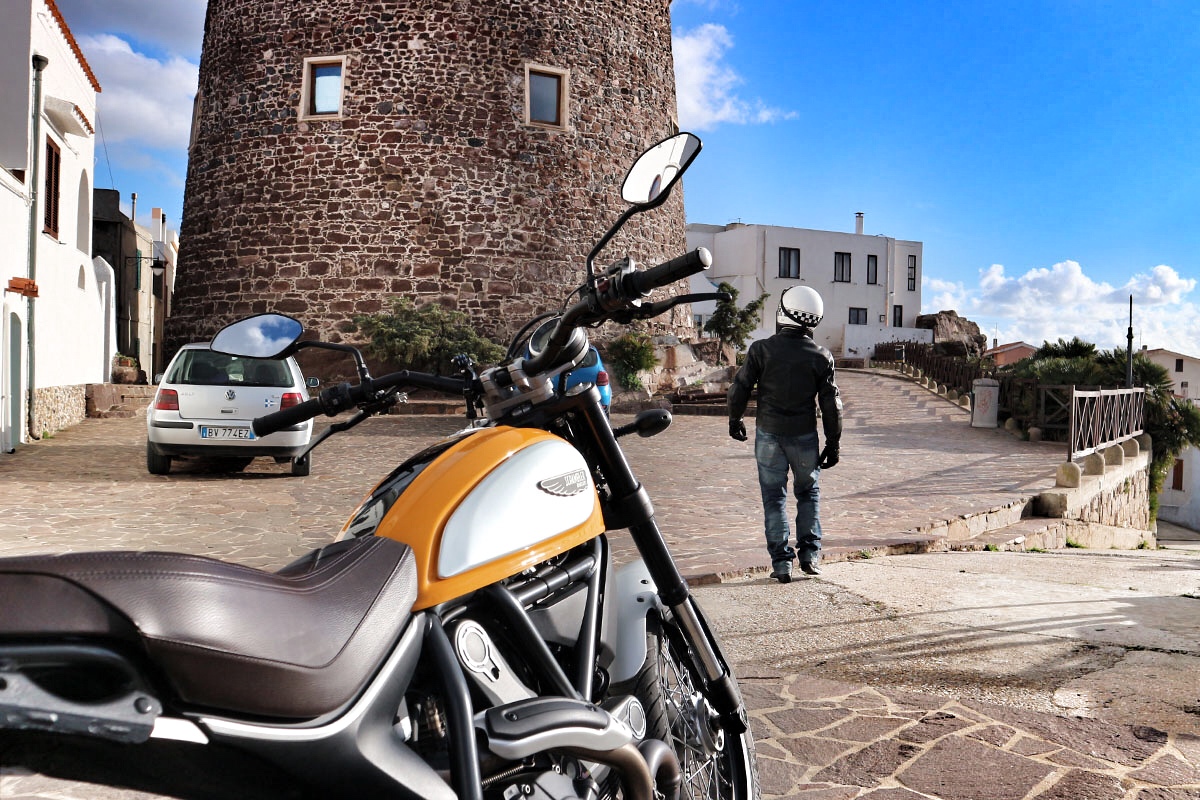 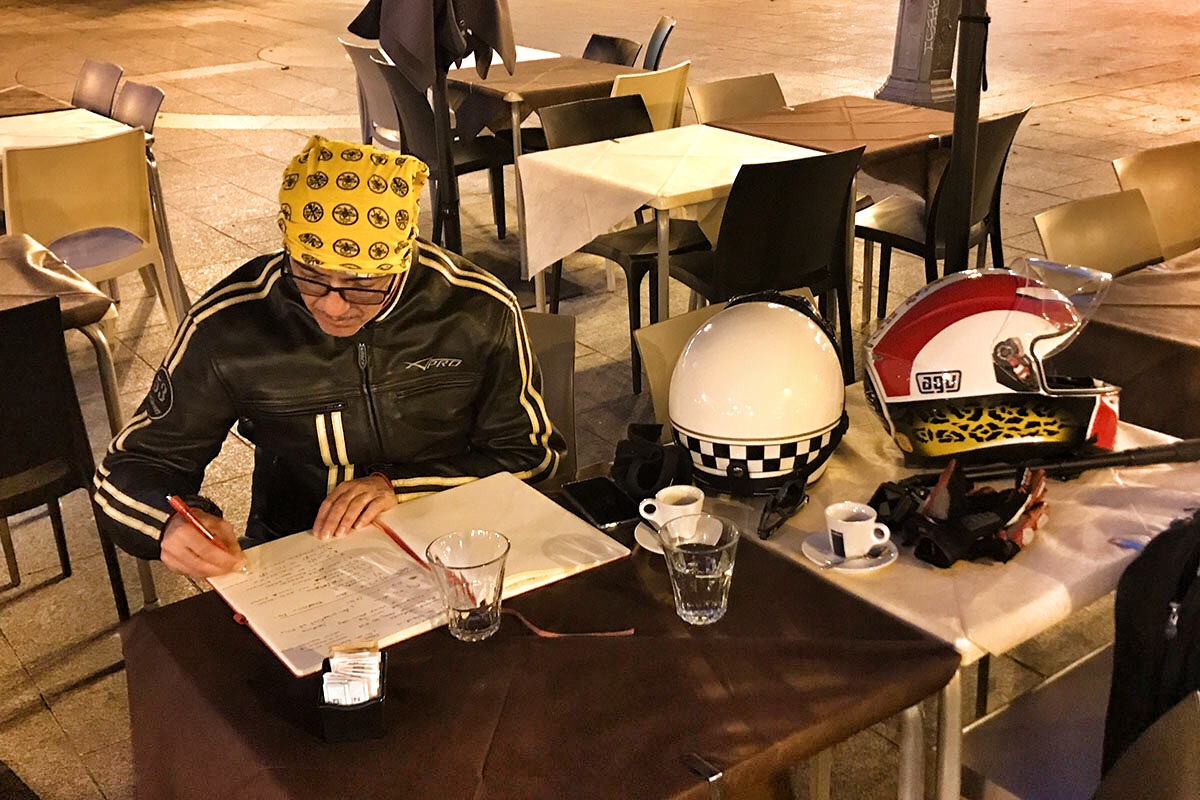 After we had arrived in Sant’Antioco, which is the second largest island of Sardinia after Sardinia itself, we had a very good lunch at the restaurant La Sulcitana. At that restaurant you can also take along dishes. We ate delicious ‘Spaghetti allo scoglio’ in the back compartment of the restaurant, in a nice big space. Feeling invigorated we moved on to the northernmost spot of the island – to Calasetta. There, in a bar, we treated ourselves to another espresso while talking to two interesting gentlemen, who work for a non-profit organization that stands up for the protection of animals and the environment.

Following this, we rode through the picturesque Calasetta which is a little place on the hillside. From the top we had a marvelous view over the surrounding settlements and the sea. Since it was already late and the sun sets early in January, even in Sardinia, we drove back the shorter path across the heartland. Back in Cagliari, in a café at the center in the Piazza Yenne, Doriano wrote down in detail where we had been exactly. Thank you again Doriano for the great motorcycle tour we had together. See you again in Sardinia!

Finally, I would like to show you the aforementioned video which displays how beautiful Sardinia is even in January. You find other videos of this amazing trip here…